Based upon our data yes more minorities are killed by a passenger vehicle towing a trailer.  All of the political leaders on the left have tried to destroy our cause but our point is if they address minorities killed by the Corona Virus why not our cause? 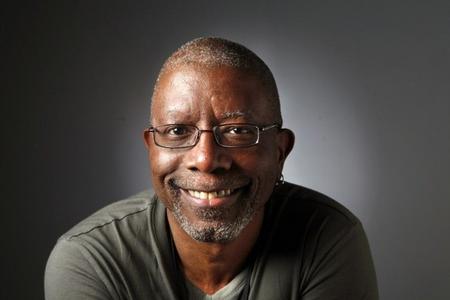 All of these death's have been completely ignored by everyone on the left.  Yes especially African American's because they never respond.  Asian's And Even Undocumented People Nobody On The Left Cares 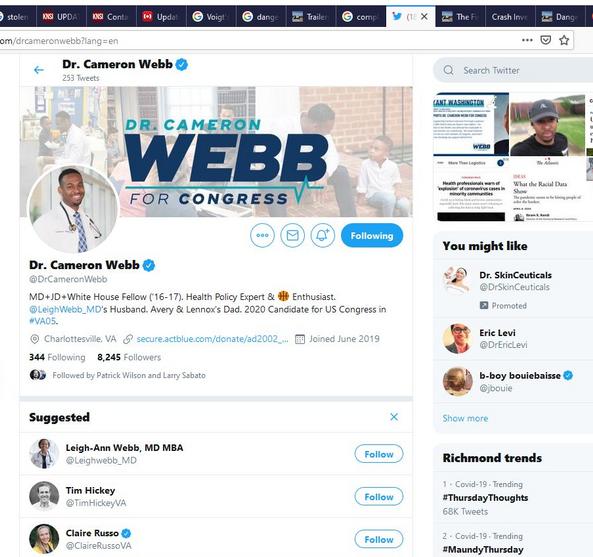 Reports in some areas of the country show the novel coronavirus is having a disproportionate effect on African Americans. But data in Virginia, like many other places, is so incomplete that it’s difficult to know if that’s happening here.

The Virginia Department of Health posts updates on its website that include cases by race. But in 54% of the 3,645 positive cases to date, race is listed as “not reported” and an additional 6% of cases are listed as “other.”

On top of that, the department reports cases by locality, but no further data is available to the public in Virginia about which communities or ZIP codes of a county or city are being hit harder than others.

Gov. Ralph Northam addressed the issue in a news conference Wednesday and said Virginia needs to measure cases by race because of racial inequities in access to health care, education and economic opportunity.

He and state Health Commissioner Norman Oliver said the incomplete data comes from private medical providers not reporting the data to labs that do the tests, and thus the state doesn’t get complete data.

“It is my understanding that private testing labs and some other private partners are not currently reporting this data,” Northam said. “We’re exploring ways to make sure that they do.”

The Department of Health will send letters to private medical partners encouraging them to report data by race.

Of the state’s positive cases in which race was recorded as white, black or other, there were 506 cases involving blacks as of Wednesday, or 30.4%. U.S. Census Bureau data lists blacks as 19.9% of Virginia’s population. Whites made up 917 of those cases, or 55%.

The state only has race data on half of the 75 known COVID-19 deaths in Virginia, Oliver said. Of the half that are recorded by race, 14, or 18.7%, were African American, he said, and three, or 4%, were Latino. He said the state should eventually get the full racial breakdown of deaths because race will be collected on death certificates.

Because of a lack of widespread testing, long wait times for results and lags in reporting, Virginia is likely to have significantly more COVID-19 infections than the confirmed cases that the Department of Health reports.

Dr. Cameron Webb, the director of health policy and equity for the University of Virginia School of Medicine’s Department of Public Health Sciences, said the lack of data is “very troubling. National trends showing a disproportionate racial impact are not shocking to experts because of a longstanding health deficit for blacks in America,” he said.

He noted that Virginia’s data for positive coronavirus tests lacked an age in just one case, showing that medical providers know age is important to track in a pandemic.

“For whatever reason, people have chosen to believe that the race of the patient is not an important factor. And now, that has to stop based on what we’re seeing all over the country.”

Robert Barnette, president of the Virginia State Conference NAACP, said he would like to map which communities have the most cases to determine if there’s a disproportionate racial impact.

“I would like to have that data as well and we are trying to get that data. We are asking folks at the governor’s office: Why isn’t there data on race with regard to coronavirus?” he said Monday.

State Sen. Scott Surovell, D-Fairfax, has been asking the governor’s office if more detailed data is available on race and location of cases.

“There’s data that’s out there that can be used to analyze this and from my perspective the more people’s brains we have looking at this, crowdsourcing it, the better chance we have of coming to some conclusions,” he said. “A lot of our lower-wage workers and our minority workers can’t telework … and it’s important to see this data and what effect it’s having on populations” to adjust the policy response.

National reports show a disproportionate impact by race in areas like Detroit and Milwaukee. ProPublica reported Friday that 81 percent of the 27 deaths in Milwaukee County were African Americans, while the countywide population was just 26% African American.

Louisiana Gov. John Bel Edwards said Monday that more than 70 percent of people in Louisiana who had died from COVID-19 were African Americans.

But many areas of the country are not reporting data by race.

“When you look at being black in America, No. 1, people unfortunately are more likely to be of low socioeconomic status, which makes it harder to social distance. No. 2, we know that blacks are more likely to have diabetes, heart disease, lung disease,” he said. “I and many black Americans are at higher risk for COVID. It’s why we need everyone to do their part to slow the spread.”

Virginia Del. Lamont Bagby, D-Henrico, chairman of the Virginia Legislative Black Caucus, said he too wants more data broken down by race in Virginia. “We have more questions than we have answers,” he said.

And he said the Black Caucus has questions about the lack of available tests.

“That also impacts individuals that may not readily have those resources available in their communities,” he said.

We simply ask if this is important should not our cause to the right be as equal?  Since 1975 Over 28,000 and increasing by 20% year over year.  Since 1988 Over 1,000,000 injured and increasing by 19% year over year by a passenger vehicle towing a trailer!  We put them on notice.
We are going to prove that all of these people have entered the life saving issue late to the game as they did not care or want to address the deaths of over 28,000 since 1975 and over 1,000,000 injured of ALL RACES before this Corona Virus.  Yes this effort is all political and our evidence proves it because they did nothing to save lives last year over 500 killed in 2019.  My own Government continues to hide these deaths.

I commend the RTD for publishing my comments!  We expose them all for being hypocrites

So our melanin pigment doesn’t shield African Americans from the coronavirus after all.

It was a ridiculous idea that shouldn’t have required Snopes or PolitiFact to debunk. The disproportionate toll of COVID-19 on African Americans is as deadly serious as it was utterly predictable.

Yes, racism has left African Americans with a lingering mistrust of medicine and government. (See “The Tuskegee Study of Untreated Syphilis in the Negro Male.”) But our medical history has been one of susceptibility, not immunity.

Everyone involved — from the man on the street to the clinician in a lab coat — should have realized COVID-19 spelled particularly bad news for African Americans. Or as CNN commentator Van Jones said this past week: “Black people are underinsured, underemployed, and barely healthy on a good day.”

And so it has come to pass, with devastating disparity.

In Virginia? Who knows?

On Friday morning, on the Virginia Department of Health’s website, all but one of the state’s 4,509 confirmed COVID-19 cases were tracked in an age category. Fewer than 2% did not list a gender. But nearly half of the cases did not report a race.

And you wonder why we keep shouting “Black Lives Matter!” for those in the back of the room? Some private labs and testing sites haven’t bothered to count us during a deadly pandemic.

This is unacceptable. Information is key to unlocking the secrets of any disease. Researchers have discovered that COVID-19 is deadlier for men than for women. But we’re not tracking a particularly at-risk community?

“In a pandemic such as this, it is critical that everyone has as much information as possible, from the decision makers to the public,” Gov. Ralph Northam said Wednesday. “Data comes in from a variety of sources, both public and private: our local health departments, the hospitals, the private testing labs and more. It is difficult but important for everyone to be reporting the same types of data so we have a better picture of what this virus looks like here in Virginia.”

Northam, a physician whose term as governor was nearly derailed by his blackface baggage, should be especially sensitive to the implications of this omission. On Wednesday, he noted longstanding racial inequities in education, economic opportunity and health care access that can lead to underlying health conditions — such as diabetes, hypertension, asthma and obesity — that put African Americans at greater risk of COVID-19.

The governor said he was exploring ways to ensure that private labs report racial data. He needs to demand it.

Dr. Danny Avula, director of the Richmond and Henrico Health Districts, said his staff will be following up with patients to fill in the blanks on race.

“I’m as surprised as you are that we don’t have better data,” he said Thursday.

The federal government has ceded data collection to the states, with uneven results. If President Donald Trump can go out of his way to brand this disease the “Chinese virus,” the least government can do is track its racial and ethnic casualties. After all, this disparate outcome is a legacy of this nation’s unwillingness to confront its history of racism and how it erodes the health of its black citizens.

At the very least, the special vulnerability of communities of color cries out for targeted testing. But testing remains a problem.

Avula said the Daily Planet is testing the uninsured and he’s trying to expand free testing in the private sector. His department did two large, free testing events, but then the flow of test kits from Washington dried up.

Tracy Causey, CEO of the Capital Area Health Network, said lack of testing is a problem. Meanwhile, low-income black communities lack choices in the face of the virus.

Residents in Richmond’s impoverished, isolated communities often lack the privilege that social distancing requires. If you live in a food desert, it’s an effort to obtain decent groceries during normal times.

Prevention is key in the absence of a vaccine. But at a time when we need rigorous data to tame this virus, we aren’t even getting the basics.

We cannot repeat the 1980s, when White House indifference over the HIV/AIDS pandemic had tragic consequences in the gay community. Add HIV to the list of maladies disproportionately afflicting black Americans today.

The people most likely to die from the coronavirus disease must not be rendered invisible. 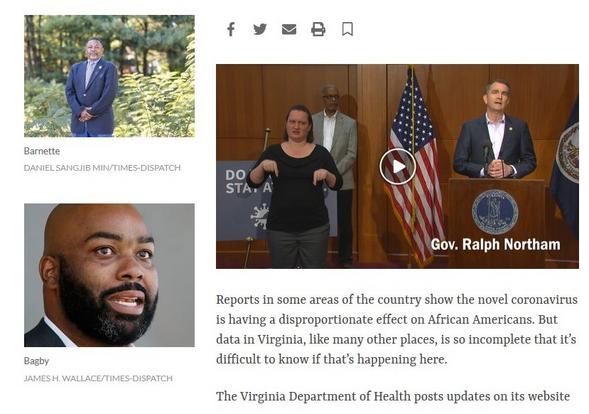 Another 20 more Deaths of minorities and African American Tommrow... 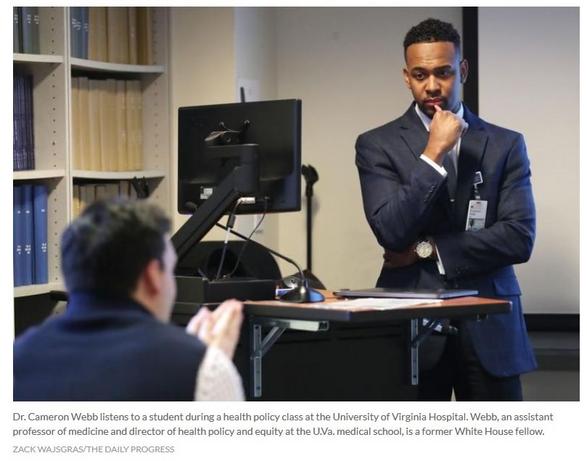 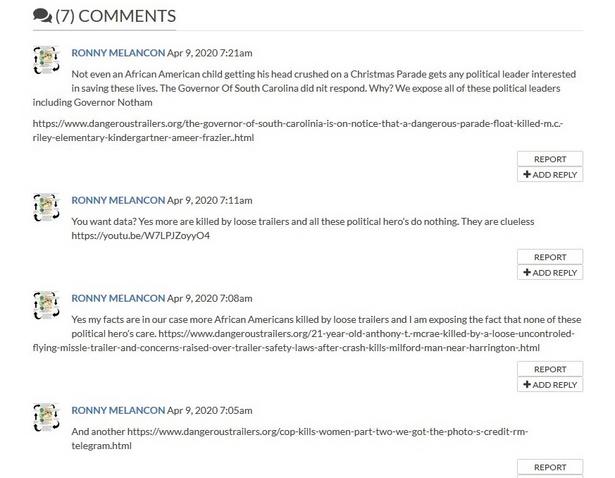 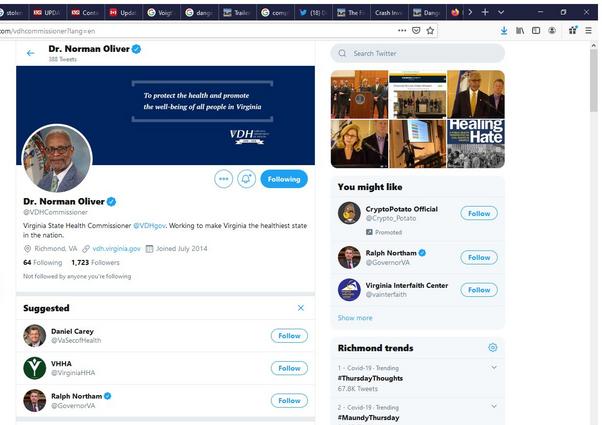 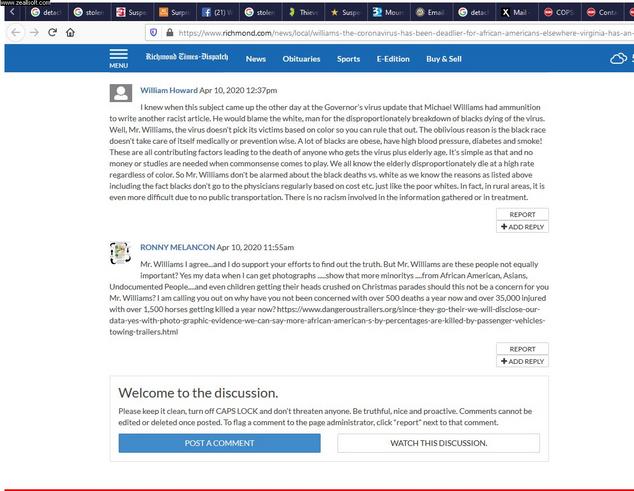 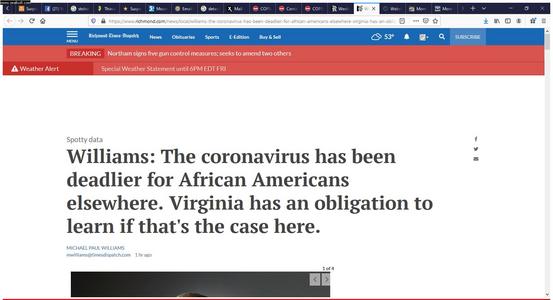 Since the political leadership has opened the door on this subject why only African Americans who have died from the COVID-19 Virus?   This page will expose the fact that these political leaders are only really concerned with scoring political points using deaths as a way to further divide us.

The fact is the Virus does not know who it attacks but when a person is towing a trailer for some reason with my photo evidence when I am able to get them my research shows that more African American's by percentages are killed by a loose and uncontrolled trailer!   That is what my research shows and for some reason none of these political leaders acted on our research.  Why?   Why has every political leader except for Governor Bob McDonnell ignored our cause?

"Would you put a baby into a homemade baby seat?"  Then why are people towing "Homemade" trailers in front of all of us on a Public Road?