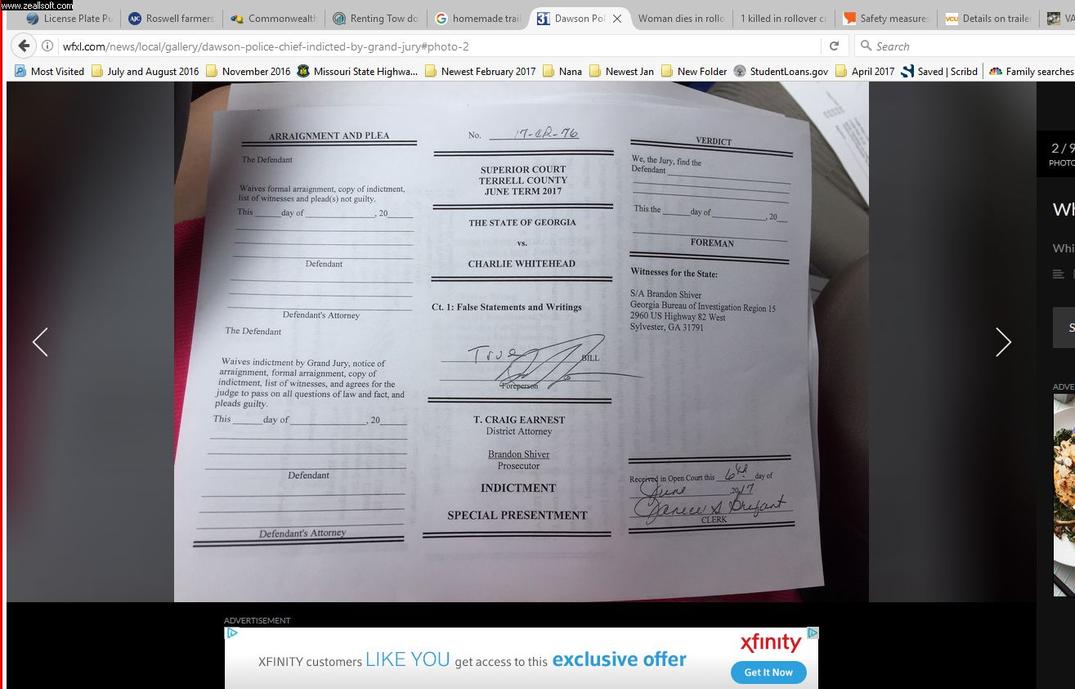 Note:  We provided tons of evidence to the DA on why and how people steal trailers....Google...Dangerous Trailers How To Steal A Trailer.

Dawson Police Chief Charlie Whitehead along with three other people have been indicted by a grand jury for their connection to a plate being illegally obtained for an allegedly stolen trailer in February 2017.

The Terrell County Sheriff's Office said Whitehead turned himself in around 9 a.m. Wednesday and has since posted bail and been released from the jail.According to court documents, Whitehead is accused of not inspecting a trailer and had not verified a serial plate was affixed to a trailer and that the certification would be used to unlawfully obtain a Georgia license plate.

That charge comes in connection to to the alleged theft of a trailer with a value of more than $5,000 by Christopher Peters. Peters then applied for a license plate for the trailer.

Peters is alleged to have known that the manufacturer's serial number and identification mark has been removed for the purpose of concealing the identity of the trailer according to the indictment. Peters was hit by a charge of false statements for applying for and obtaining a certificate under false pretense to obtain a Georgia license plate.

Peters has been charged with theft by taking, criminal use of an article with an altered identification mark, two counts of making a false statement, affixing of plate to conceal or misrepresent identity,

Christopher Robinson has been charged with two counts making a false statement for encourage and aiding Christopher Peters in making false statements on the homemade trailer affidavit and certificate of inspect by a law enforcement official.

District Attorney Craig Earnest said Whitehead's charge is a felony, and he could face up to five years in prison and a $1,000 fine if convicted.

Arraignment is scheduled for June 26 in Terrell County, with a trials currently scheduled to begin Aug. 28, subject to change.

FOX 31 reached out to Dawson City Manager Barney Parnacott for comment. Parnacott said the City has does not have a comment right now.