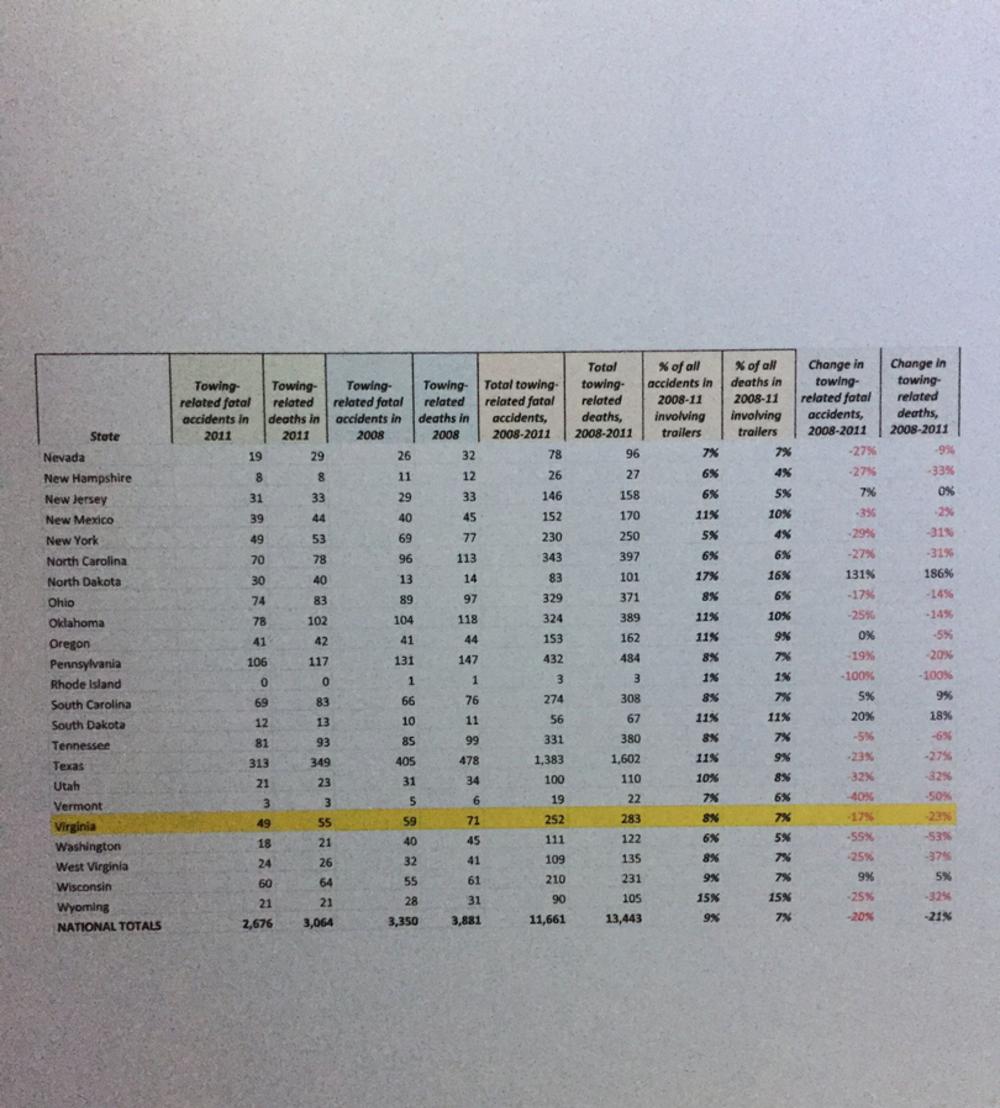 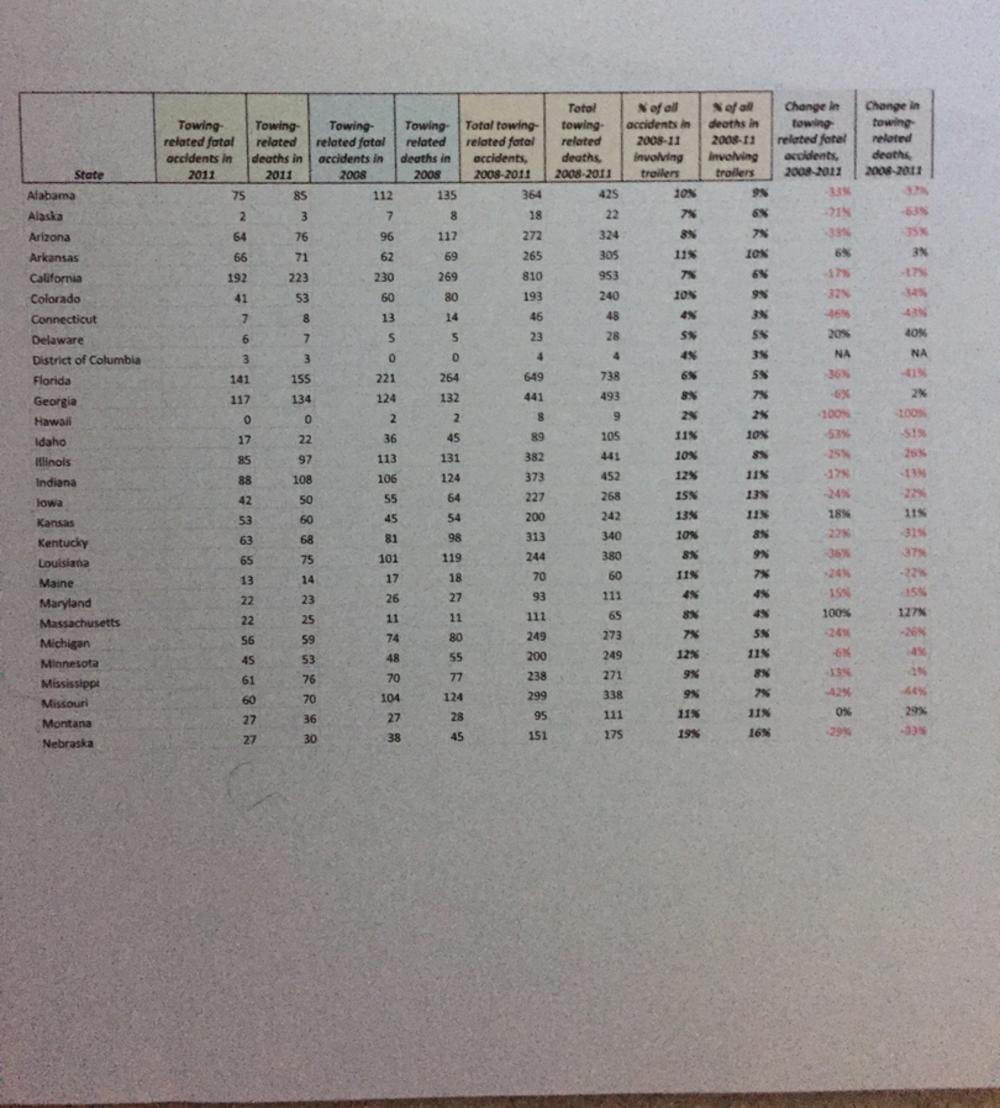 By Lee Francis and Mike Waldron

A trailer hauling a three-wheel motorcycle had come unhitched, slamming into the vehicle driven by Totter, a father of two.

According to Totter’s sister, Donna Moser, the family is still recovering and looking for answers.

“This had a big effect on my whole family,” Moser said. “He has two little boys, and during that week, those two little boys stood in front of his casket all them hours asking, ‘Why is daddy sleeping in there? Why won’t daddy come out of there?’ ”

Wisconsin is one of a handful of states where the number of trailer-related traffic fatalities has increased in recent years.

Between 2008 and 2011, towing-related fatal accidents jumped 9 percent in the state known as “America’s Dairyland.” During the four-year period, trailers were involved in 210 deadly incidents in Wisconsin, resulting in 231 deaths.

This is according to a computer analysis of data from the National Highway Traffic Safety Fatality Analysis Reporting System, which logs every U.S. traffic accident in which someone dies.

In 2008, the data showed there were 3,350 towing-related fatal accidents in the United States, and they killed more than 3,880 people. Trailers were involved in more than 9 percent of all fatal wrecks that year.

Thirty-nine states had fewer towing-related fatalities in 2011 than in 2008. Deadly trailer accidents in Idaho, Washington and Alaska dropped by more than half.

But nine states, including Wisconsin, saw increases in fatal accidents involving trailers; such accidents doubled in North Dakota and Massachusetts.

Trailers can pose a serious danger on the nation’s roads. From 2008 through 2011, there were more than 11,660 towing-related traffic accidents, and they killed more than 13,440 people.

For the four-year period, Texas topped the list with nearly 1,400 trailer-related fatal accidents and 1,600 deaths.

For Moser, the issue is more than numbers. Three times this year, trailers have come off in Wisconsin Rapids alone. One time, Moser said, the incident was caught on camera because the trailer hit a police cruiser. About two years after her brother’s death, a loose trailer killed 19-year-old Whitney Radder as she was heading back to college.

“You would not believe the homemade trailers I’ve seen here. It’s just horrible,” Moser said. “People take the back of their pickup trucks and turn them into trailers. I have never seen a cop pull someone over because it looks like their trailer is ready to fall apart. Never.”

When working at Home Depot, Moser said she was waiting for a customer to unload his trailer and recommended he cross the chains that help secure a trailer to a vehicle — and can prevent it from becoming unhitched in an emergency. The customer pulled up on the trailer’s hitch, exposing an undersized tow ball.

“He was laughing, and I looked at him and inside his truck. And he had two little girls in there. And I said, ‘Would you be laughing if a trailer came off and killed one of your daughters? Would that be funny? Would it be funny if that came off and killed somebody? Could you live with yourself?’ ” Moser said.

“I know I couldn’t, knowing that trailer can come off and kill someone and you don’t care.”

A Crusade Against Unsafe Trailers

What began as a fender-bender has evolved into one man’s crusade for a safer road system.

Ron Melancon was coming home from the library in Henrico County. The pickup truck in front of him began slowing down, so Melancon began braking. Then, there was a collision.

“I hit something and I thought, ‘What in the world did I hit?’ It turns out that I hit a trailer without working lights,” he said.

The police came and took a report. After some research, Melancon discovered that trailers like the one he hit aren’t inspected. He took plenty of pictures and was later able to prove in court that he was not at fault in the crash.

He could have stopped there, but Melancon has since lobbied legislatures across the country and founded dangeroustrailers.org, a website dedicated to pushing for increased regulation of trailers nationwide.

Shortly after his day in court, Melancon persuaded his state delegate at the time, John Reid, to sponsor a bill requiring reflective tape on tow-behind trailers in Virginia that don’t reach the inspection threshold.

Reid, a Republican who represented the 72nd House District from 1990 through 2007, submitted the bill for consideration by the 2004 General Assembly. House Bill 429 passed unanimously and was signed into law, taking effect July 1, 2004.

The law required that “There shall be affixed to the rear end of every trailer that has an unloaded weight of 3,000 pounds or less either two or more reflectors of a type approved by the [Virginia State Police] Superintendent or at least 100 square inches of solid reflectorized material. The reflectors or reflective material shall be applied so as to outline the rear end of the trailer.”

The following year, the General Assembly amended the law so that it applies to any utility trailer that does not require state inspection. The bill defined a utility trailer as “a trailer whose body and tailgate consist largely or exclusively of a metal mesh.”

Melancon said Virginia is the only state with this type of law. There is no overarching federal law that regulates utility trailers or their accompanying hitches, he said.

“My dream is to have Virginia be the model for the nation that can make this stop, or at least reduce the accidents,” he said.

Under federal law, if a trailer weighs more than 3,000 pounds, it’s supposed to have brakes that initiate when it becomes unhitched. Melancon says that regulation isn’t being enforced.

That was the case in a fatal crash in Chesterfield County in 2005.

Elaine Decker, 51, of Midlothian, was traveling westbound on Hull Street Road in her Cadillac when she was stuck by an unhinged homemade trailer. She died at the scene.

Benjamin Frazer, driver of the 2003 Ford F-250 pickup truck hauling the trailer, was charged with reckless driving and several other equipment-related charges after the incident, according to a statement released by the Chesterfield County police department about a week after the crash.

The trailer that killed Decker was above the weight limit required for a state inspection and working brake system, but lacked both, according to a crash reconstruction team from VCU’s transportation training safety center, which analyzed the incident.

Constructed in 1985, the homemade, steel, flat-bed trailer was composed of parts from a mechanical automobile lift and two axles from a mobile home.

The truck it was connected to was too high off the ground for the connecting mechanism to work properly, but crash investigators noted that the trailer’s “coupler” may have been defective before the crash and therefore would not have worked on a normal vehicle either.

The crash occurred when the hitch and coupler separated, putting the entire weight of the trailer on a small, metal clip connected to a worn-out chain.

“The clip failed, releasing the chains and allowing the trailer to become a freewheeling, uncontrolled projectile,” investigators noted.

Trailers are required to have working tail and brake lights, and if they exceed 3,000 pounds, they must receive a state inspection and have brakes.

In this case, brakes were installed on the trailer’s front wheels, but they weren’t connected to the electrical harness, rendering them useless. Neither was there an emergency breakaway system as required by law. Because it was equipped with brakes, this trailer was required to be inspected but did not display any plates or inspection sticker.

“During a cursory visual inspection while driving by, an officer could have easily identified a minimum of five potential violations,” investigators noted.

Virginia’s Department of Motor Vehicles requires homemade trailers to be registered and licensed. A police officer must inspect the trailer to ensure its Vehicle Identification Number to enable the process to title and register the trailer. However, crash investigators noted that “homemade trailers … do not have to demonstrate that they are roadworthy or safe in any general sense in order to be titled or registered.”

Investigators also noted in their summary of the crash that state code was silent regarding design of utility trailers.

“Cops will give me a ticket for not wearing a seat belt in my car to protect me against me, but they’ll let a person tow a homemade trailer in front of me that can kill me,” he added.

Melancon says certain politicians, government bureaucrats and special interests in the transportation industry are unwilling to challenge the status quo and push for safer trailers.

Melancon has contacted the office of U.S. Rep. Eric Cantor of Henrico County. Melancon would like the House majority leader to help pass a federal statute about trailer safety.

But Melancon said no new legislation pertaining to trailer safety is on the horizon nationally or in Virginia. He’s currently in the midst of writing a book on how to make sure trailers are working safely. Melancon says people will be able to download the book for free from his website. His goal? Saving lives.

More on this story

Details on trailer deaths by state

How we analyzed the FARS database

How we analyzed the FARS database

The data used for this story originated from the National Highway Traffic Safety Administration’s Fatality Analysis Reporting System. The federal agency releases the FARS data a little more than a year after it’s collected. The zipped files come in a .dbf format and were massive, almost 70 megabytes; therefore, they needed to be imported into Microsoft Access to handle the large file size.

Once imported, we were faced with the reality that the entire data set was coded. We assumed this was a residual effort to save space since FARS has been documenting all traffic incidents since 1975, a time when computer memory was a modicum of what it is today. So, in response, we used census data to decode the FIPS-coded states by linking the two tables in Access’ Query Design Wizard in order to begin sorting the information.

Once decoded, we were strictly interested in accident-related trailer fatalities and deaths along with total fatal traffic accidents and deaths. We accomplished this feat using Access’ Query Wizard and, without too many issues, were able to query the data for each year (the above steps had to be repeated for each data set since FARS, naturally, only releases one year at a time).

The information was then transferred into Microsoft Excel to ease the sorting, filtering, and subsequent totaling tasks (percent change, etc.) needed to put the data into perspective for the story.