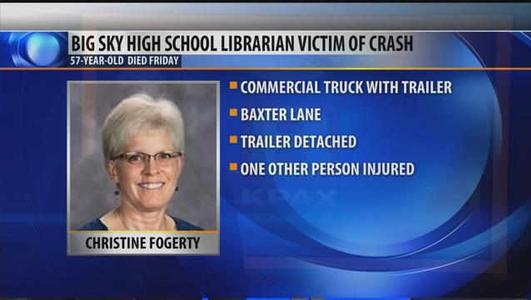 This Page Will Feature The Newest Loose, Detached, Horse, Boat Trailer Accidents That We Discover.  The Newest Will Be On The Bottom Of This Page As We Are Not At This Time Able To Put The Newest On Top.

Click Here To Be Taken To The Massive List...Newest Accident / Stolen Trailer on the Bottom

Big Sky High School lost longtime librarian Christine Fogerty on Friday when she died in a car accident while visiting family in Bozeman, according to Principal Natalie Jaeger.

The Montana Highway Patrol listed a single fatal wreck in Bozeman Friday, but released no name.

Walrath said the wreck happened on a strip of Baxter Lane outside city limits, just before its intersection with Monforton School Road. Although the car was pushed off the road by the oncoming trailer, Walrath said there was no evidence either of the cars was going too fast.

The injured passenger was airlifted to an unspecified city.

Jaeger sent out a note Saturday morning to students and parents informing them of Fogerty’s death, which she called "a great loss" to Big Sky and the community of Missoula.

“Christine's work in our schools and throughout Missoula and across Montana made an incredible positive impact on all of our lives," Jaeger wrote.

Jaeger said on Sunday that Fogerty worked for years for the Missoula County Public School District, where she served as a librarian at various schools, including Willard Alternative High School, Sentinel High, C.S. Porter Middle School and Big Sky.

Fogerty, Jaeger said, was one of the most energetic and innovative educators in Missoula. Although Jaeger said Big Sky will be looking for another librarian in the near future, the faculty and students are focusing first on grieving their beloved librarian and supporting her family.

“I can imagine that Christine would want us to take care of the professional loss immediately,” Jaeger said. “She was so organized and all business in that way. But we’ll get to that next week because there is no way to ever replace her or fill that void.”

Jaeger said Big Sky will be planning a vigil so students and faculty can pay their respects to Fogerty. Funeral arrangements are being planned by her two daughters, Sloan and Sundee Fogerty, she said.

MCPS Director of Communications Hatton Littman said Fogerty was involved in curriculum all across the state.

“Christine had an incredibly long career with the district,” Littman said. “And she was one of the strongest educators I’ve ever met.”