A thin metal ring designed to keep truck wheels tightly secured was missing from a tractor-trailer when two of its 18 wheels slid off last week on Interstate 10, bounded across the highway and struck a Tulane University senior at a Mississippi rest stop, killing her, according to a state transportation official.

The absence of the locking ring, a $3 part, likely led to the freak accident that killed Margaret "Meg" Maurer near Gautier on the Mississippi Gulf Coast, said Willie Huff, director of the office of enforcement of the Mississippi Department of Transportation.

Gautier police requested a state inspection of the big rig following the fatal incident, in which police said the two conjoined wheels traveled nearly 300 yards before striking Maurer and coming to rest another 150 feet away.

Maurer, a 21-year-old Minnesota native, was headed with Tulane classmates in two cars from the Mardi Gras celebration in New Orleans to a cabin in the Blue Ridge Mountains in North Carolina.

Faculty at Tulane’s department of ecology and evolutionary biology grieved last week over the loss, describing Maurer in glowing terms, personally and academically. A Newcomb Scholar in a leadership program for Tulane women, Maurer also was a teaching fellow. She sold plants and crocheted items at the Green Wave Community Market and became a skilled illustrator of nature.

Her bright future was snuffed out in bizarre fashion, during a bathroom break on the drive along the Gulf Coast.

The truck was heading westbound, and after the wheels slid off the trailer’s rear left side, they careened across the eastbound lanes of the interstate and into the rest stop where Maurer was returning to her car.

A photo of the trailer axle that lost two wheels while traveling westbound on Interstate 10 in Mississippi on March 5. The wheel assembly careened into a trucks stop near Gautier, MS, killing 21-year-old Meg Maurer, a Tulane University senior from Minnesota.

Huff said the metal ring — a 3-inch locking washer — was missing when inspectors unpacked the outer hub of the wheel assembly following the fatal incident. It is one of two rings that Huff said are meant to lock in place the large nuts holding the wheels in place. Only one ring was found, he said.

The conclusion that the missing metal ring was to blame for the lost wheels was still preliminary, Huff said.

These parts were found when Mississippi state officials unpacked the runaway wheel assembly that killed 21-year-old Tulane University senior Meg Maurer in a freak accident on March 5 in Mississippi. But a state transportation official said a locking ring of similar dimensions was missing.

It is not mentioned in a brief report by Mississippi transportation officials on the inspection that was done after the incident. That report, provided to The Advocate by the Gautier Police Department after a public-records request, found “out of adjustment” brakes where the wheels came off, but blamed the problem on a common failure of newer air-brake systems.

Inspectors also found a leaking seal in the same spot, a violation that prompted Mississippi officials to order the trailer taken out of service for repairs.

Huff said the leaking may have been caused by damage from the loss of the two wheels. In any case, he said, neither of those issues would have caused the rear wheels to spin off and cross the interstate.

He said that the missing ring wouldn’t have broken off. More likely, someone “failed to put (it) on there,” he said.

Publicly available federal truck inspection data show only one minor violation for the truck, for a failure to properly install placards, and nothing for the trailer over the last few years before the fatal mishap on March 5.

The truck is owned by Dana Transport Inc. of Avenel, New Jersey, a large trucking firm. It is also listed under a related company, Suttles Truck Leasing of Demopolis, Alabama.

Both companies are in good standing with the Federal Motor Carrier Safety Administration, with “satisfactory” ratings and a better-than-average record on crashes and vehicle safety.

Huff said the missing ring would not have been detected in the kind of unannounced roadside inspections that are logged into the federal database.

“To inspect that truck for that deficiency, you’d have to take all the wheels off the truck,” he said.

“It’s also something that probably would not be noticed with a pre-trip inspection or roadside inspection unless the wheel is wobbling. More than likely, this wheel wasn’t wobbling. It just slipped off.”

Gene Patten, vice president of safety and compliance for Dana Transport, declined to discuss details of the investigation but said the company wasn’t sure that Mississippi DOT was “on the right track” with its conclusions about the trailer’s wheel assembly.

“We’re all in shock. We all know the young woman was a beautiful person,” Patten said. “We’re grieving with them and we are praying for all involved.”

Patten's comments came before Gautier police released the Mississippi report to The Advocate, and before Huff described the missing locking ring to the newspaper. Patten did not return later calls seeking comment about those findings, or about any recent annual inspections of the truck that many states require.

David Dorrity, a South Carolina trucking safety expert who frequently testifies in court cases, said there are three main reasons that wheels can fly off big-rigs: a wheel seal failure in which grease is lost and the metal overheats, an installation error or a sheared axle.

Dorrity said wheel separations usually occur on the left side of a truck, where the wheels turn against the clockwise torque of the nuts. He said he’s come across a few such cases in the last year.

"It’s a dangerous situation,” he said. “It’s just the grace of God how they hit.”

Maurer’s mother, Tracy Maurer, declined a request to speak about the case.

A GoFundMe page has been set up to funnel donations made in Meg Maurer's honor to causes related to "her passions for conservation, plants, language and scholarship."

Exposing The Angel Wing The United States Senators  Who Do Not
Care That Over 28,000 Since 1975 Have Been Killed By
A Passenger Vehicle That Is Towing A Trailer
Click Here For Killer Wheels 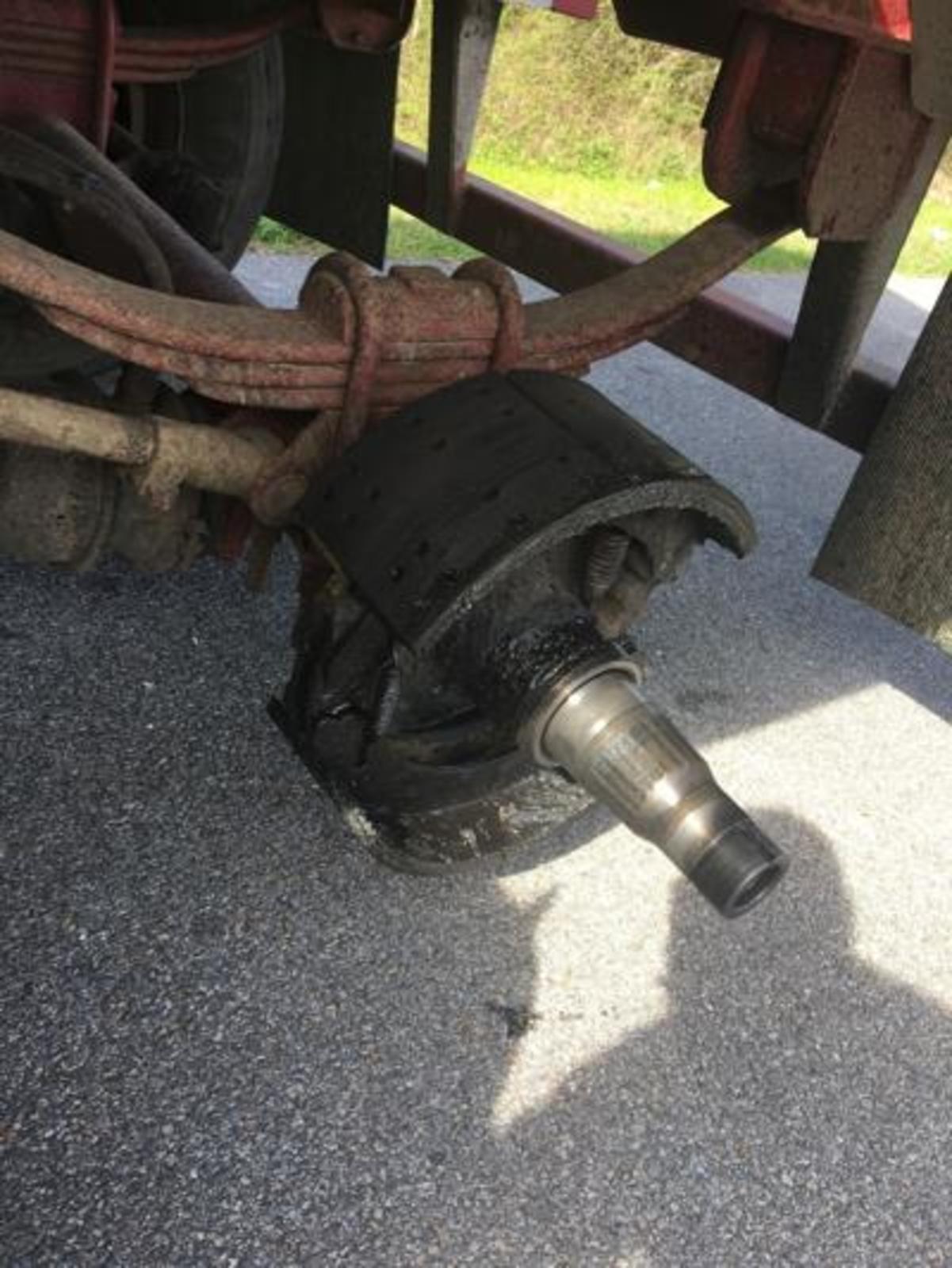 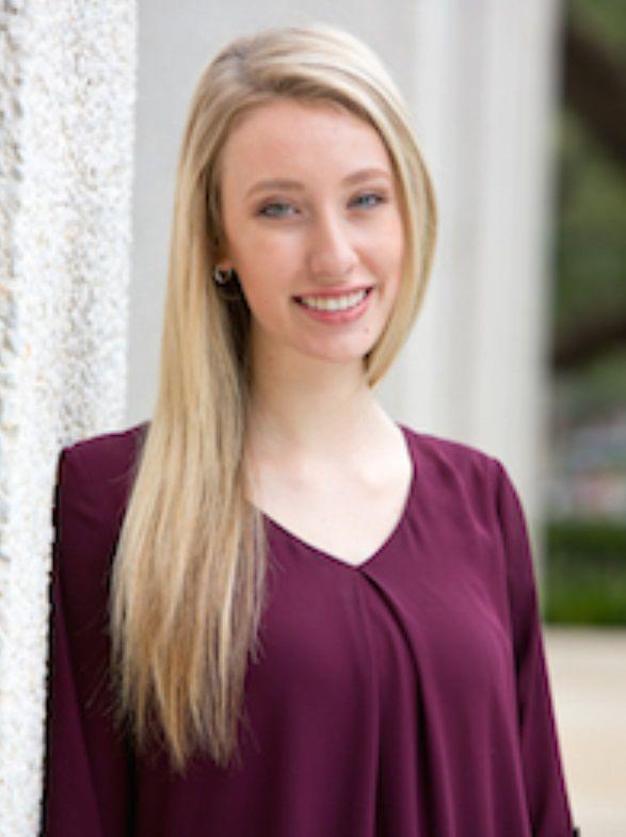 A photo of the trailer axle that lost two wheels while traveling westbound on Interstate 10 in Mississippi on March 5. The wheel assembly careened into a trucks stop near Gautier, MS, killing 21-year-old Meg Maurer, a Tulane University senior from Minnesota.Source: Mississippi Dept. of Transportation

Don't you find it really odd that each and every year over 100 are now killed by "Wheel Offs"  and not a single Government Agency wants to address why so many are killed like this...but wait a minute less than 80 are killed when a person hits.....

A Tractor Trailer and they want to "Mandate" a $5,000 "Angel Wing" on all tractor trailers that these lawmakers who are investors in this and make millions.....

Over 1.2 Billion dollars in trailers and contents are stolen a year now

Over 100 Will Die When Seniors who Drive RV's who are 80---85---90----95 and even 98 are driving 30,000 pounds of killing machines called RV using only a CAR DRIVERS LICENSE and all we get is CRICKETS at our Government agencies and push back by people who want to destroy and silence our cause.  We expose the Senators in Congress who do not care about the death of

Exposing The Angel Wing Part One

These parts were found when Mississippi state officials unpacked the runaway wheel assembly that killed 21-year-old Tulane University senior Meg Maurer in a freak accident on March 5 in Mississippi. But a state transportation official said a locking ring of similar dimensions was missing.Source: Mississippi Department of Transportation 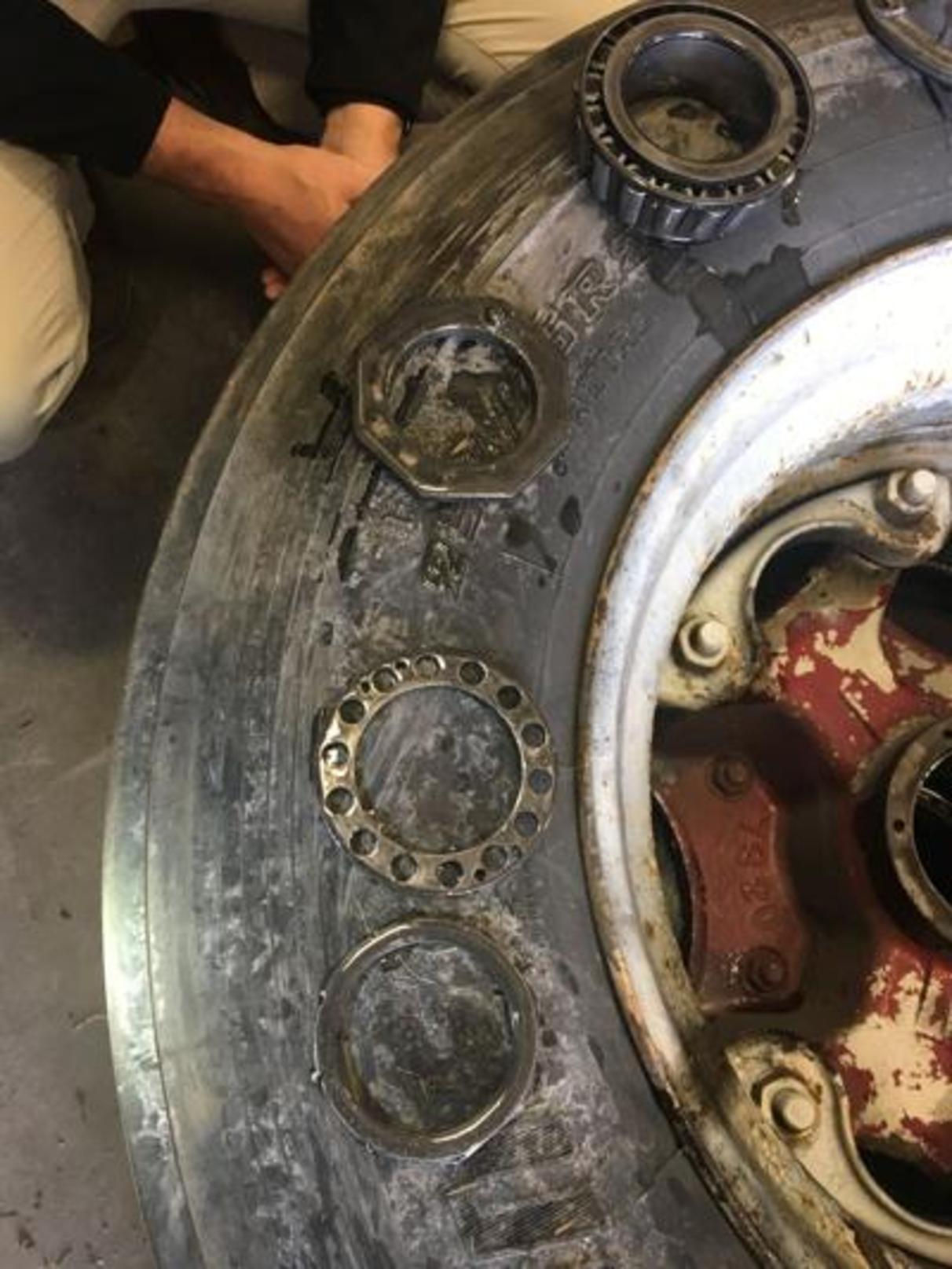