We Expose the complete and utter lie that these United States Senators are pushing.    We simply state that since

But boy if you hit a Tractor Trailer and kill yourself then we need a $5,000 add on to each and every tractor trailer that each and everyone of us will pay for when these trucking companies pass the cost onto us.

Memo more fuel will be consumed because the trucks will be heaver by this add on ....and will contribute to "Global Warming" right?

What Lawmakers will benefit with profits when they mandate this?  Ask The Questions 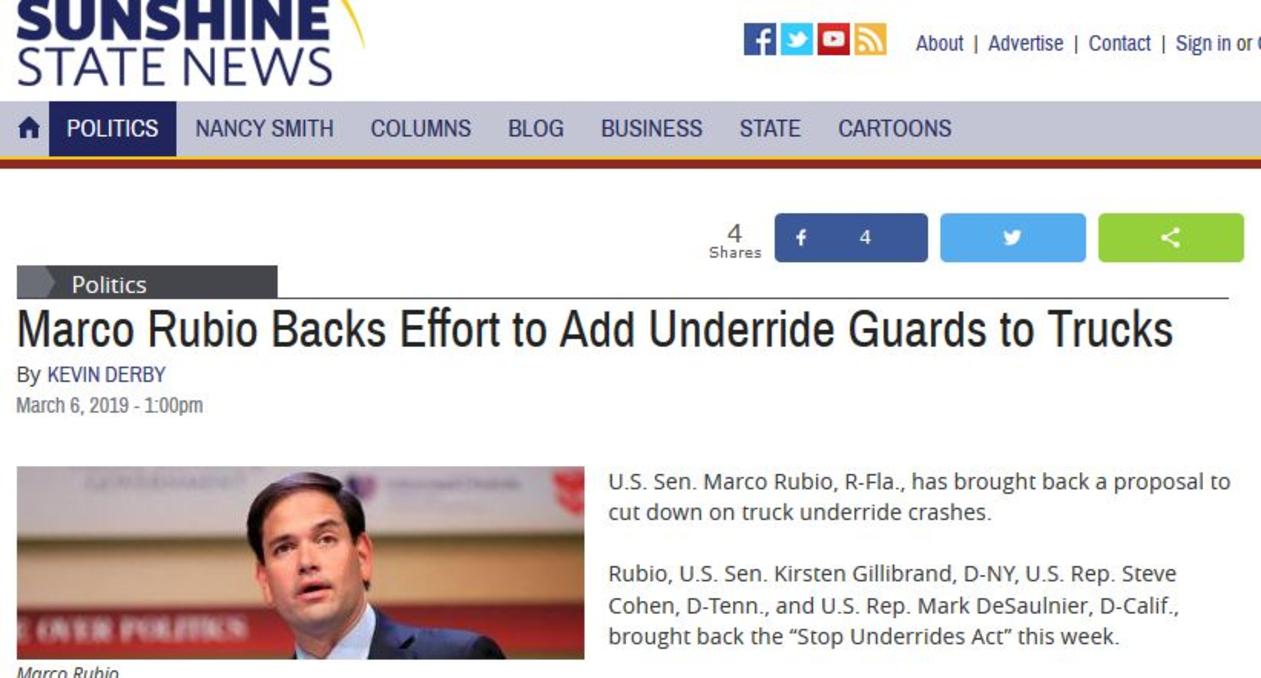 U.S. Sen. Marco Rubio, R-Fla., has brought back a proposal to cut down on truck underride crashes.

“An underride crash occurs when a car slides under a large truck, such as a semi-trailer, during an accident. When these accidents happen, a car’s safety features are rendered useless because most of the car slides under the trailer and the truck crashes straight through the windows and into the passengers. The passengers in the car often suffer severe head and neck injuries, including decapitation. These accidents are often fatal, even at low speeds,” Rubio’s office noted. “Studies and pilot programs show that a simple barrier attached to the lower area of a truck, called an underride guard, would help prevent a car from sliding underneath a truck in an accident. Under current federal law, underride guards are not required to be on the sides or front of trucks. Underride guards are already required for the back of a truck, but the standards are outdated. The bipartisan Stop Underrides Act would require underride guards on the sides and front of a truck and would update the outdated standards for underride guards on the back of trucks.”

“Hundreds of individuals across the nation are lost to underride collisions every year, with Florida, unfortunately, ranking among the top states for reported fatalities. This Congress, I am proud to join my Senate colleagues in reintroducing the Stop Underrides Act,” Rubio said. “As a parent with kids of driving age, I look forward to working in a bipartisan fashion to advance efforts to keep our roads safer.”

“Congress has the ability to make simple and commonsense changes that would save lives on the roads. Truck underride guards are one of the best and easiest solutions for protecting passengers and preventing them from being killed when a car collides with a truck,” Gillibrand said. “I’m proud to introduce the Stop Underrides Act to protect passengers and help keep our roads safer, and I urge all of my colleagues to join us in supporting this bipartisan bill.”

“The Stop Underrides Act lays out a path to bring an end to these terrible and all too often fatal accidents, including the death of Michael Higginbotham, who was killed in an underride crash in Memphis and whose parents, Randy and Laurie Higginbotham, have been urging Congress to take action on this long overdue issue. This is common sense legislation that will save lives. It’s the right kind of legislation that should be advocated in Congress more often,” Cohen said.

“Each year, truck underride collisions—among the deadliest type of accidents on the road—claim the lives of at least 300 people. No parent, friend, or loved one should have to suffer such a loss when there are commonsense safety improvements that can be made,” said DeSaulnier. “I am particularly thankful to Marianne Karth and Lois Durso, who each lost children in truck underride collisions, for their tireless work to make sure no other family suffers this same kind of loss.”

The Stop Underrides Act has the support of the Commercial Vehicle Safety Alliance, Advocates for Highway and Auto Safety, Consumer Reports, the Truck Safety Coalition, the National Safety Council, and the Road to Zero Coalition.

Gillibrand introduced the bill on Tuesday and she reeled in other seven cosponsors besides Rubio including U.S. Sen. Dianne Feinstein, D-Calif., and U.S. Sen. Ed Markey, D-Mass. The bill was sent to the U.S. Senate Commerce, Science and Transportation Committee. Cohen’s bill was sent to the U.S. House Committee on Transportation and Infrastructure on Tuesday.