Statement:  We are all in for saving all lives but when our cause can provide since 1975 over 25,000 dead men, women and children by a "Passenger Car That Tow Trailers" when we include Hayrides, Parades and Farm Tractors...Including over 1,000,000 injured since 1988 with missing legs, eyes, arms, hands and broken backs and no action on a National Level...........

They want a company called Angel Wing to produce and add over 3,000 to 5,000 in cost to the trailers.....who is investing in this new regulation?

Who is going to get rich?

How do we really know it is going to work?

In Dangerous Trailers.Org it is a loose trailer that comes off the hitch and randomly kills innocent people.

Now this article that Trailer Truck Bodies published they say that in the year 2015 ....301 lives were lost and we call them liars....because our approved data from FARS indicates that in 2015 Left Side Deaths were 38 Right Side Deaths were 20 how did they come up with 301?

FYI our cause in 2016 over 450 were killed by a passenger vehicle that is towing a trailer and BTW 6 States have no safety chain law. 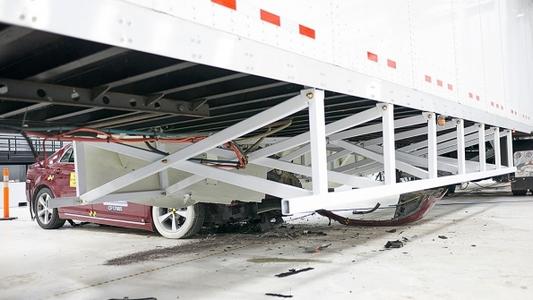 An aftermarket tractor-trailer side guard passed a strict safety test Tuesday, but while safety researchers see the demonstration as another step toward reducing underride fatalities, a trailer industry representative cautions that extensive real-world testing is needed before effective side guard standards can be established.

Tuesday's test by the Insurance Institute for Highway Safety was the second for the AngelWing device produced by Airflow Deflector Inc, upping the speed of a midsize car from 35 mph to 40 mph—the speed at which IIHS conducts its frontal crash tests of passenger cars. A 40 mph crash involves 30 percent more energy than a 35 mph crash, IIHS notes.

The latest test was conducted during the Institute's second roundtable on truck underride crashes. Held at the IIHS Vehicle Research Center and cosponsored by the Truck Safety Coalition and AnnaLeah and Mary for Truck Safety, the event brought together safety advocates, researchers, government officials and industry leaders to discuss ways to make it safer for passenger vehicle occupants to share the road with large trucks.

How to deal with dissimilar metals

"Our tests of the AngelWing show that measures to reduce the side underride problem are within reach," says David Zuby, IIHS executive vice president and chief research officer. "Broader use of devices like this one, combined with continued improvements to rear underride guards, would go a long way toward reducing deaths in large truck crashes."

The Tuesday test was "impressive," Truck Trailer Manufacturers Association President Jeff Simms told TBB. For his part of the program, Simms provided an industry progress update on the move to stronger rear underride devices, as well as some perspective on the evaluation of side guard equipment.Jeff Simms, TTMA
Along with pointing to highway safety data that shows about half of big truck fatalities do not involve "passenger compartment intrusion"—the sort of crash underride-protection devices are designed to mitigate—Simms noted the complexity of designing and installing devices for the wide range of trailer types and applications on the road today. Specifically, movable tandem axles make placing side guard devices problematic. Additionally, installing a device to protect the entire length of a trailer poses challenges.

And weight is “a main concern,” Simms noted, doing the math: Adding a roughly 800-lb. side guard to the trailer and displacing payload means additional trips will be needed to move the same amount of freight—and those extra truck trips also carry statistical baggage such as a greater number of accidents and fatalities, based on averages.

“There’s a lot more testing that has to be done for the manufacturability, different trailer configurations and installs,” Simms said. “And there’s no real-world testing yet. You’ve got to run these in all kinds of conditions. In the winter, you have to see how much ice and snow collect, and how that’s going to fall off. A big chuck of ice coming down the freeway at you is dangerous, as well.

“A successful test was done Tuesday, at 40 mph, in a direct, perpendicular collision. But what’s going happen at different angles, and will it redirect the car back into traffic?” Simms continued. “So there’s a lot more testing that has to be done, and data to be gathered.”IIHS photo
In Tuesday's test, a 2009 Chevrolet Malibu struck the center of a 53-foot-long dry van trailer at 40 mph. The outcome was similar to the 35 mph test with the AngelWing. The side guard bent but didn't allow the car to go underneath the trailer, and the car's airbags and safety belt properly restrained the dummy in the driver seat. Measures taken from the dummy showed there would be a low likelihood of injuries in a similar real-world crash.

In contrast, in a second 35 mph test conducted earlier this year with no side guard, the Malibu ended up lodged under the trailer with part of its roof torn off. In a real crash like that, there would likely be no survivors in the car.

The AngelWing is a result of a collaboration that came out of the first underride roundtable, held in May 2016 at the Vehicle Research Center. It was there that Airflow Deflector President Robert Martineau met Perry Ponder, president of Seven Hills Engineering, who had developed a design for a side underride guard. Together, they modified Ponder's invention and brought it into production.

While side guards that can prevent passenger vehicle underride are relatively new, lighter-weight guards to protect bicyclists and pedestrians are more common. At least three U.S. cities — Boston, New York and Seattle — require such guards on city-owned or contracted trucks as part of their Vision Zero initiatives.

Side underride guards were the focus of Tuesday's roundtable, which also touched on progress in addressing rear underride and the role of crash avoidance technologies in reducing underride fatalities.

"When people talk about Vision Zero, often what comes to mind is the potential for self-driving vehicles to eliminate crashes entirely," says David Harkey, who directs the University of North Carolina Highway Safety Research Center and delivered the roundtable's keynote. "While technology holds a lot of promise, it's going to take a long time to get there. There are things we can do now to save lives, and side underride guards are a perfect example."

Held at IIHS’ Vehicle Research Center in Ruckersville, Virginia, the most recent test was the second time IIHS tested the AngelWing device, with the first being conducted at 35mph.

According to the institute, their researchers decided to see if the side guard would hold up at 40mph, which represents the speed in which it conducts its frontal crash tests of passenger cars.

Vehicle underrides occur when a smaller car crashes into a tractor trailer or truck and goes at least partially underneath it. Currently, federal regulations mandate that tractor trailers have underride guards on their rears, but not their sides.

Results from the recent 40mph test revealed that the trailer’s side guard bent, but did not allow the Chevrolet sedan to pass underneath it. Additionally, the car’s airbags and safety belt properly restrained the crash test dummy in the driver’s seat, decreasing the likelihood of injuries in a similar real-world crash.

In comparison, the 35mph test was conducted without a trailer side guard, which resulted in the Malibu being lodged underneath the trailer with part of its roof torn off. According to IIHS, a similar real-world crash would likely leave no survivors in the car.

“Our tests of the AngelWing show that measures to reduce the side underride problem are within reach,” David Zuby, executive vice president and chief research officer at IIHS, said. “Broader use of devices like this one, combined with continued improvements to rear underride guards, would go a long way toward reducing deaths in large truck crashes.”