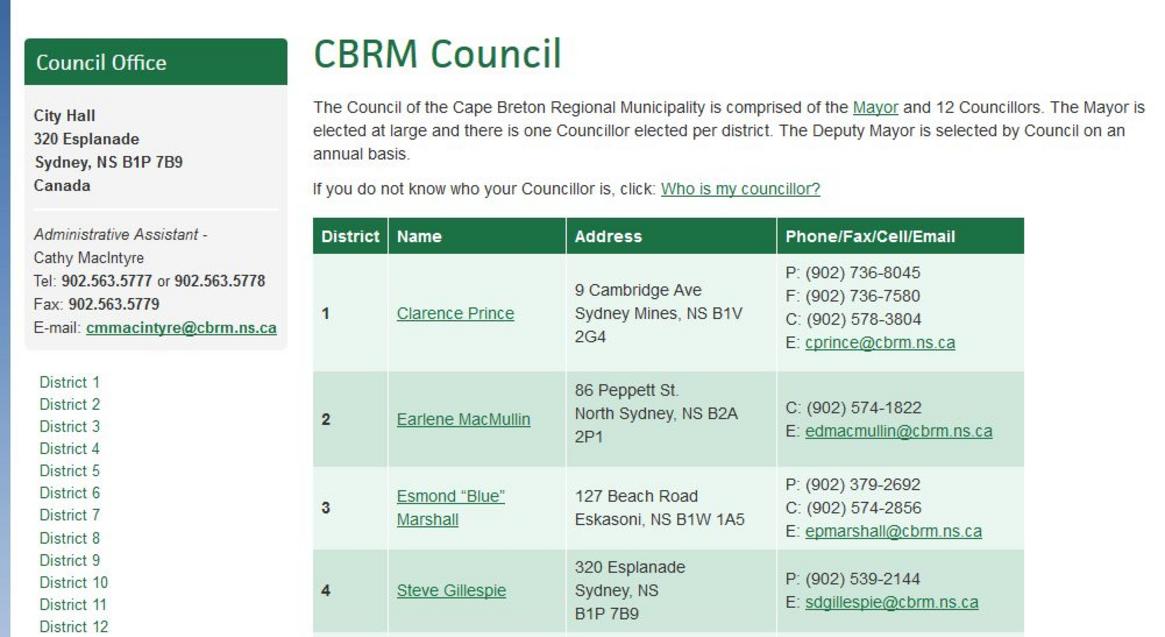 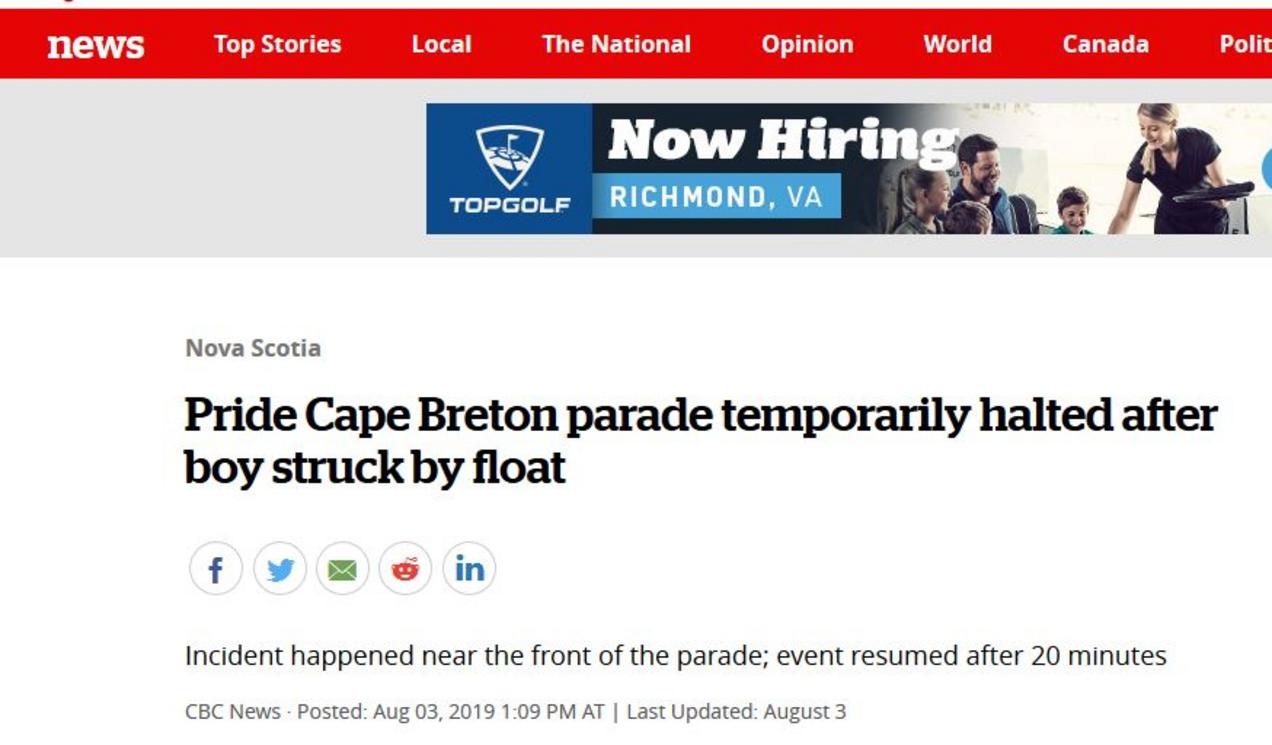 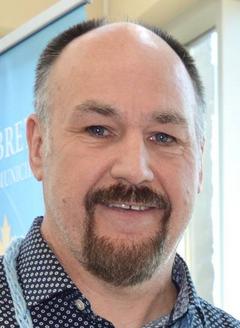 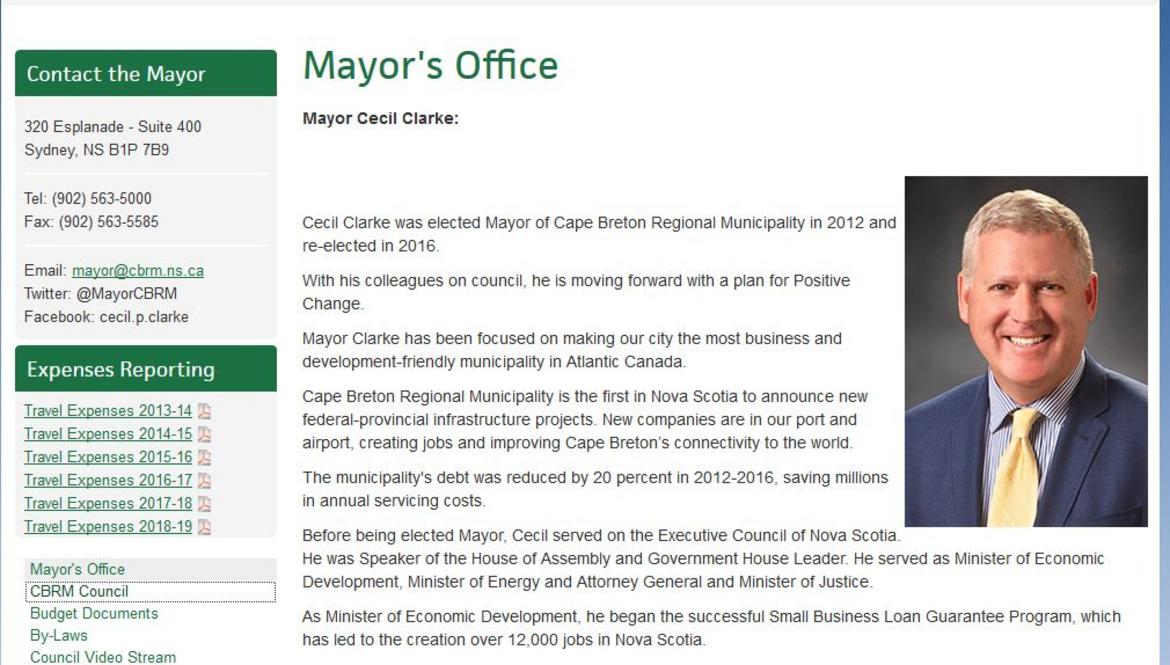 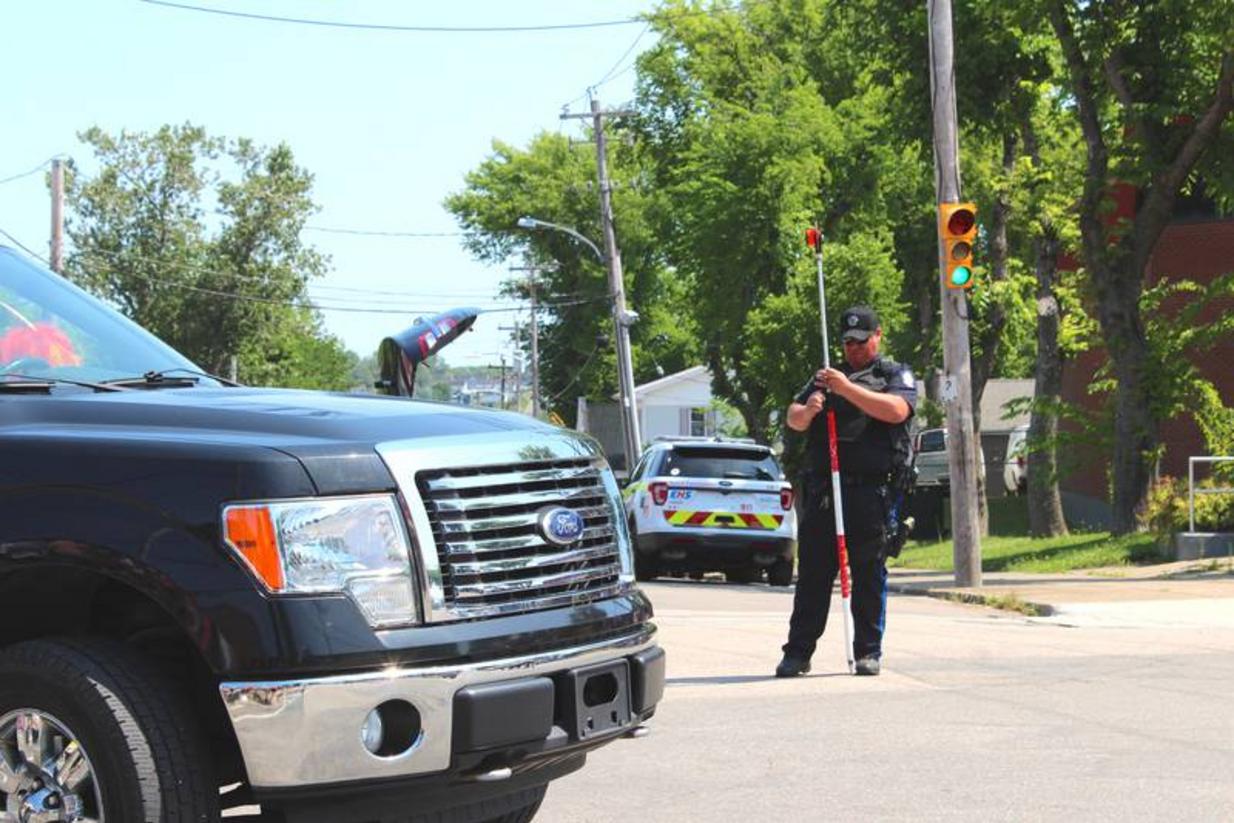 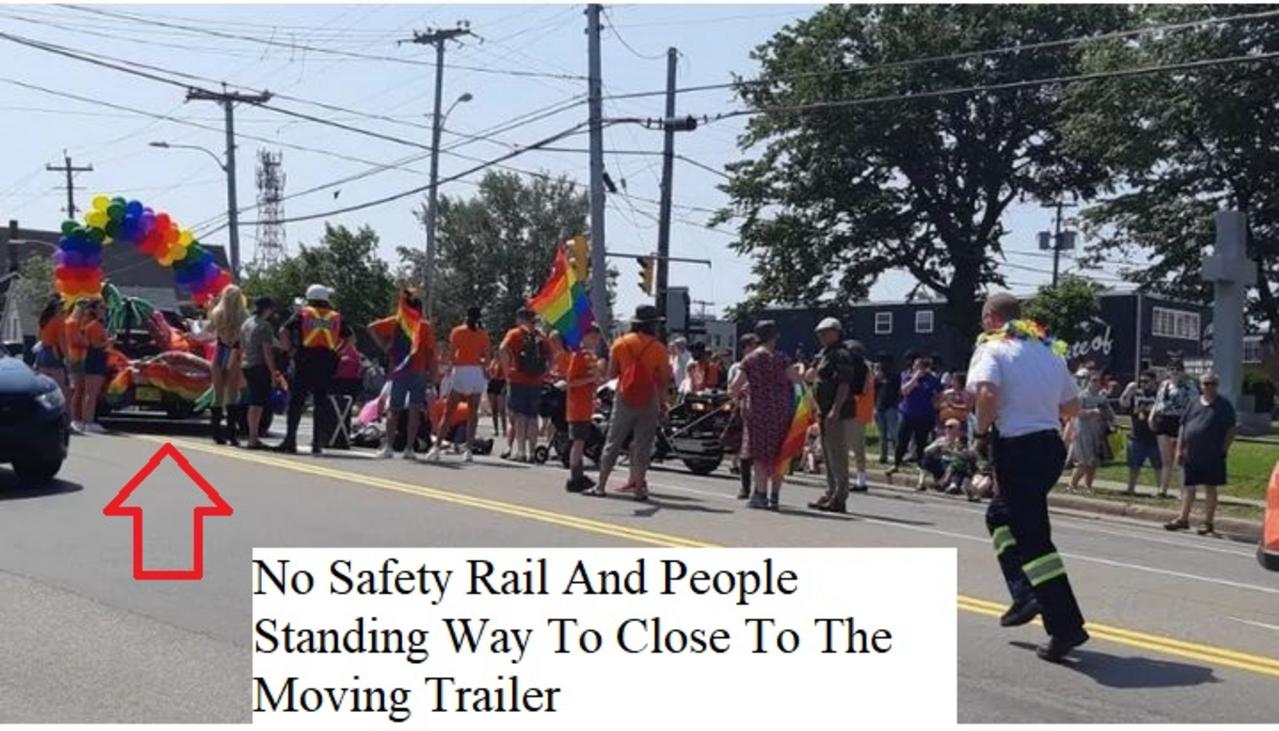 An ambulance is shown arriving at the corner of Dorchester and George streets in Sydney where a young person was struck by a parade float during the 19th annual Pride Cape Breton Parade. - Erin Pottie
SYDNEY, N.S. —

A boy was struck during the annual pride parade taking place in downtown Sydney.

The incident occurred Saturday during the largest Pride Cape Breton Parade in 19 years.

Parade onlookers were watching as the convoy was making its way along George Street, headed toward Dorchester Street and the Esplanade.

Police spokeswoman Desiree Vassallo said the injured person was a child, but could not provide his age. He was struck by the rear wheel of a trailer while he was walking.

He was taken to hospital by ambulance for the treatment and was conscious and talking to paramedics while leaving the scene.

CBRM District 4 Coun. Steve Gillespie made a Facebook post Saturday evening stating that the boy did not sustain any broken bones or serious injury.

The boy was among a group of participants walking near a Cape Breton University entry when the incident occurred.

A police traffic analyst was brought to the scene to take measurements. After a preliminary investigation and after a short delay, the parade resumed throughout Sydney.

The incident follows the Nov. 2018 death of a four-year-old girl at a Santa Claus parade in Yarmouth, which lead to wide sweeping changes for parades in municipalities across Nova Scotia. 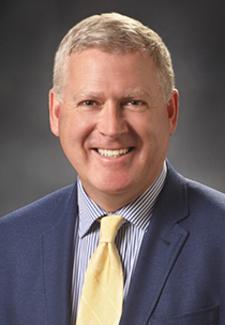 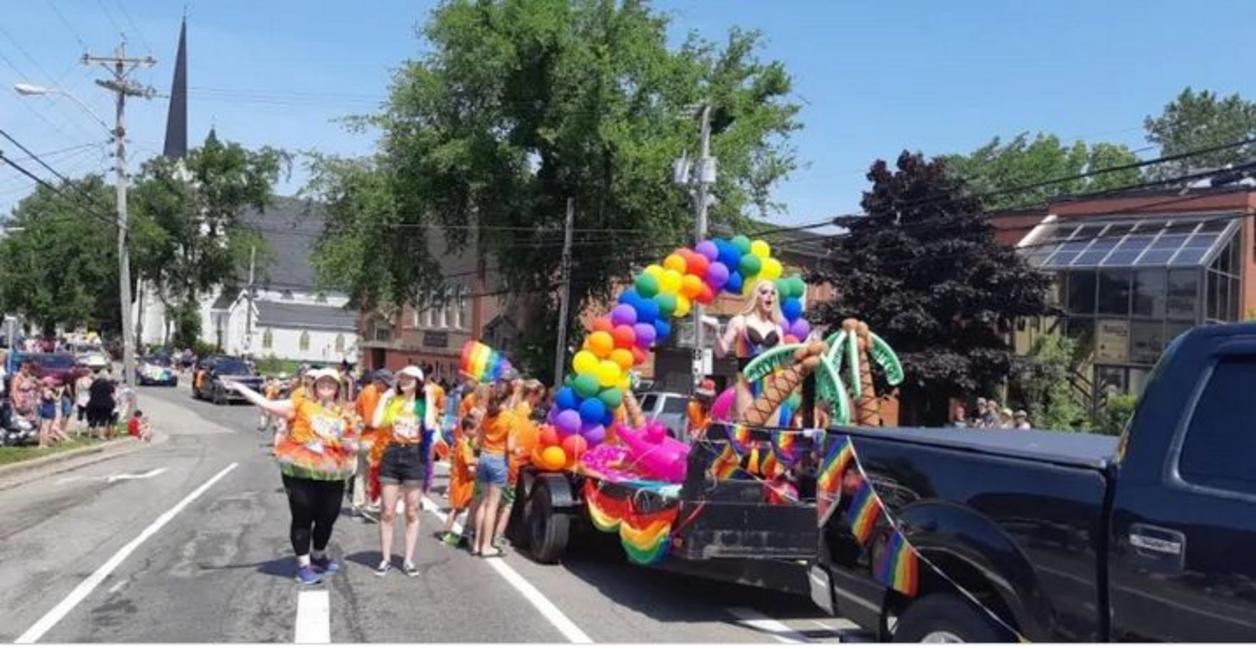 The only way to get them to listen and act is to expose them to the entire world.

A Cape Breton Regional Police officer conducts a preliminary investigation from the scene of an accident involving a 10-year-old boy who was struck by a parade float during the 19th annual Cape Breton Pride Parade. The boy was not seriously injured. - Erin Pottie
SYDNEY, N.S. —

The Cape Breton Regional Municipality is reviewing its parade rules and procedures after a 10-year-old boy was run over by a float during Sydney’s annual Pride Cape Breton parade.

The youth was struck by the rear wheel of a trailer being hauled by a pickup truck, while walking alongside the Cape Breton University entry as a parade participant.

He suffered leg injuries that were not considered serious.

The CBU float also featured people riding in the bed of the long trailer, which teetered into the air when the accident occurred.

Witnesses say the incident took place as the float was turning the corner of George and Dorchester streets, on its way toward the Esplanade.[Eldon MacDonald]
Eldon MacDonald

District 5 Coun. Eldon MacDonald was walking in the 19th annual Cape Breton Pride Parade with municipal officials Saturday morning but was on another part of the parade route when the accident happened.

The representative of the downtown area said in past years he’s been involved in discussions with staff and parade organizers about making safety improvements.

He said most of their concerns have dealt with parade spectators, as opposed to parade participants.[Jillian Moore]
Jillian Moore

“A lot of the concerns at that time was the longer float beds and the truck drivers making the turns, in particular onto Charlotte Street,” MacDonald said.

Jillian Moore, municipal spokesperson, said CBRM staff would not be available to discuss the incident until a meeting with police is conducted.

The municipality updated its parade rules last fall following the death of a four-year-old girl who fell underneath a float at a Santa Claus parade in southwestern Nova Scotia.

When parades happen on municipal roads, as was the case Saturday, municipalities are responsible for issuing their own parade permits.

“We take as many steps as we can to make sure that all of our parades run efficiently and effectively,” said MacDonald.

MacDonald said the municipality has operated a number of parades over the years with no problems, noting that important discussions about the rules will follow.

Currently there is no specific policy for floats that are cornering turns, however, all motorized entries must have at least two volunteer spotters walking alongside their float at all times for the duration of the parade.

CBU spokesperson Lenore Parsley said, for its role in Saturday's accident, the university is preparing to complete an incident report and root-cause analysis to identify any policy changes or training that may reduce the risk of similar problems in the future.[Lenore Parsley]
Lenore Parsley

“This was an extremely unfortunate accident,” Parsley said.

“We are so glad that the individual didn’t suffer any serious injuries and is doing well.”

Pride Cape Breton officials, who were the organizers of the parade, said they will be reviewing safety regulations with the CBRM after their annual festival is over.

According to Cape Breton Regional Police, there were nine police officers assigned to Saturday’s parade that featured 86 float entrants.

Police spokesperson Desiree Magnus said the complement included four traffic safety vehicles, a motorcycle, a bicycle, a patrol vehicle and two on-duty managers overseeing all operations and on foot at various locations throughout the route.

Magnus said a pair of vehicles led and followed the parade procession, while another vehicle travelled ahead of the procession to ensure all upcoming intersections were free and clear of traffic.

Police officers aboard a motorcycle and bicycle travelled along the parade route to assist with traffic control at intersections as the convoy passed by.

Police were also asked about traffic barriers that were set up along certain parts of the parade route, as vehicles could be seen freely passing by participants decorating floats early Saturday morning.

Magnus said decisions on street closures are unique to every permit that comes through the CBRM.

She said in this particular case, George Street is considered a main artery and was therefore kept open.

Magnus said where roads are not completely closed, alternate measures are put in place.

She said police received no complaints about the pace of the parade and an inspection of entries was completed before hitting the streets.

“All floats were inspected by a member of CBRM Rec (recreation department) and CBRPS prior to the start of the parade to ensure they met all rules and regulations — any who did not, were not permitted to participate in the parade,” she said.

Magnus said police are not discussing any further specifics of incident, including the presence of spotters as it is part of the investigation into what happened.

Magnus said officers will be meeting with the CBRM to discuss findings and to determine “if and what” must be addressed in terms of parade procedures.

Following the incident, police traffic safety officers stopped the pride parade for about 20 minutes to perform a preliminary investigation.

After a short delay, it resumed through downtown Sydney.

Boy recovering after being hit by float at Sydney pride parade 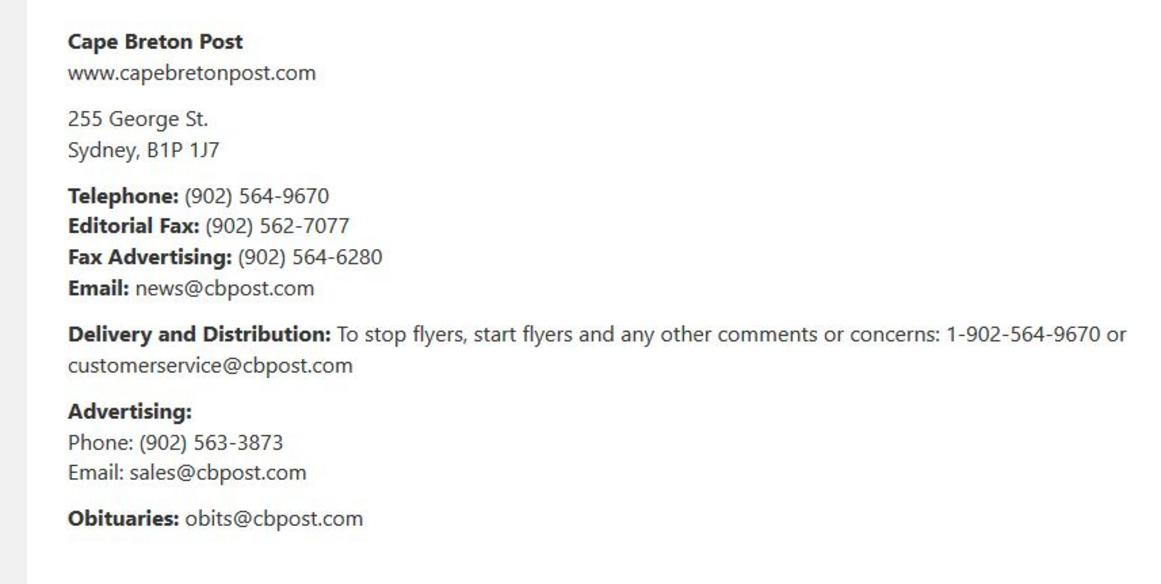 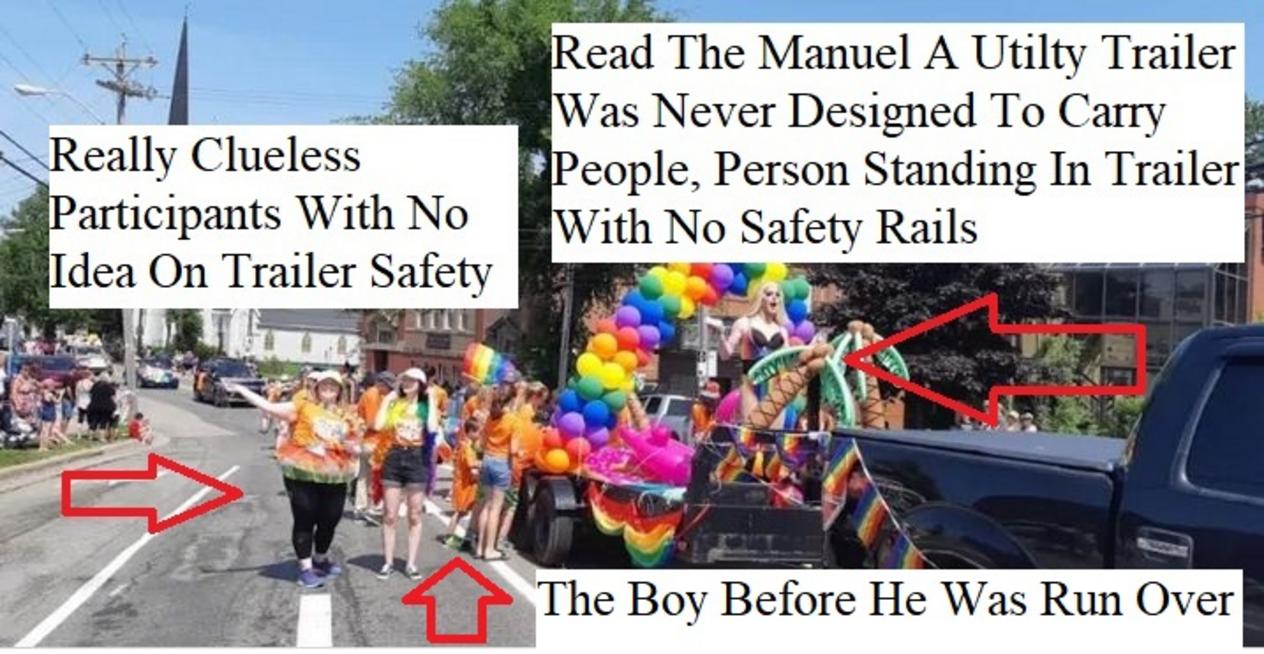 One Of Our Solutions Completely Destroyed By The Farmers
Santa Clause Runs Over 4 Year Old Girl In Nova Scotia And They Promised
And Guess What?  Nothing Was Done 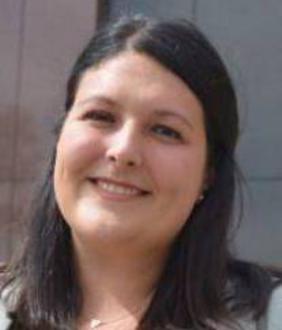 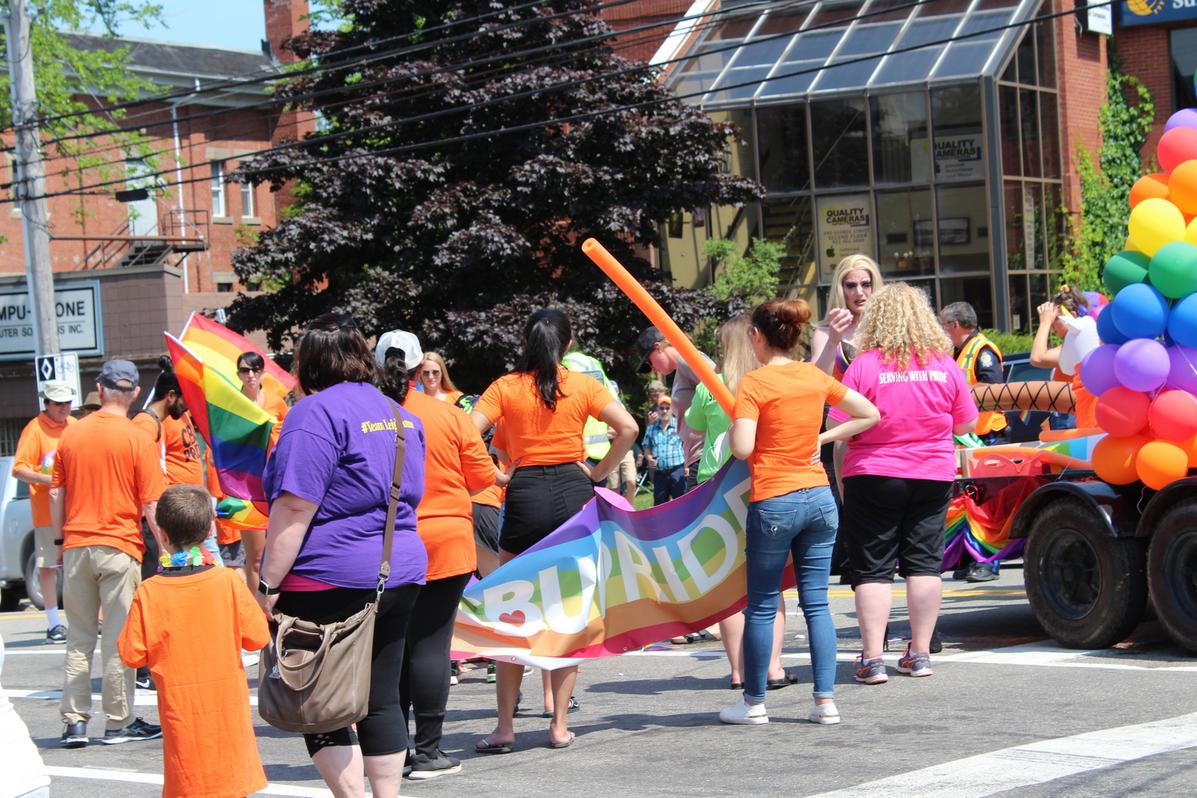 The Chain Of Command That Is Responsible For All Of This Is The College That Refused To Have Any Conversation With Us About Parade Safety.

Boy recovering after being hit by float at Sydney pride parade

So now only after a child was run over they are:

But hey they still will not call us to get our input....I guess they know better than us. 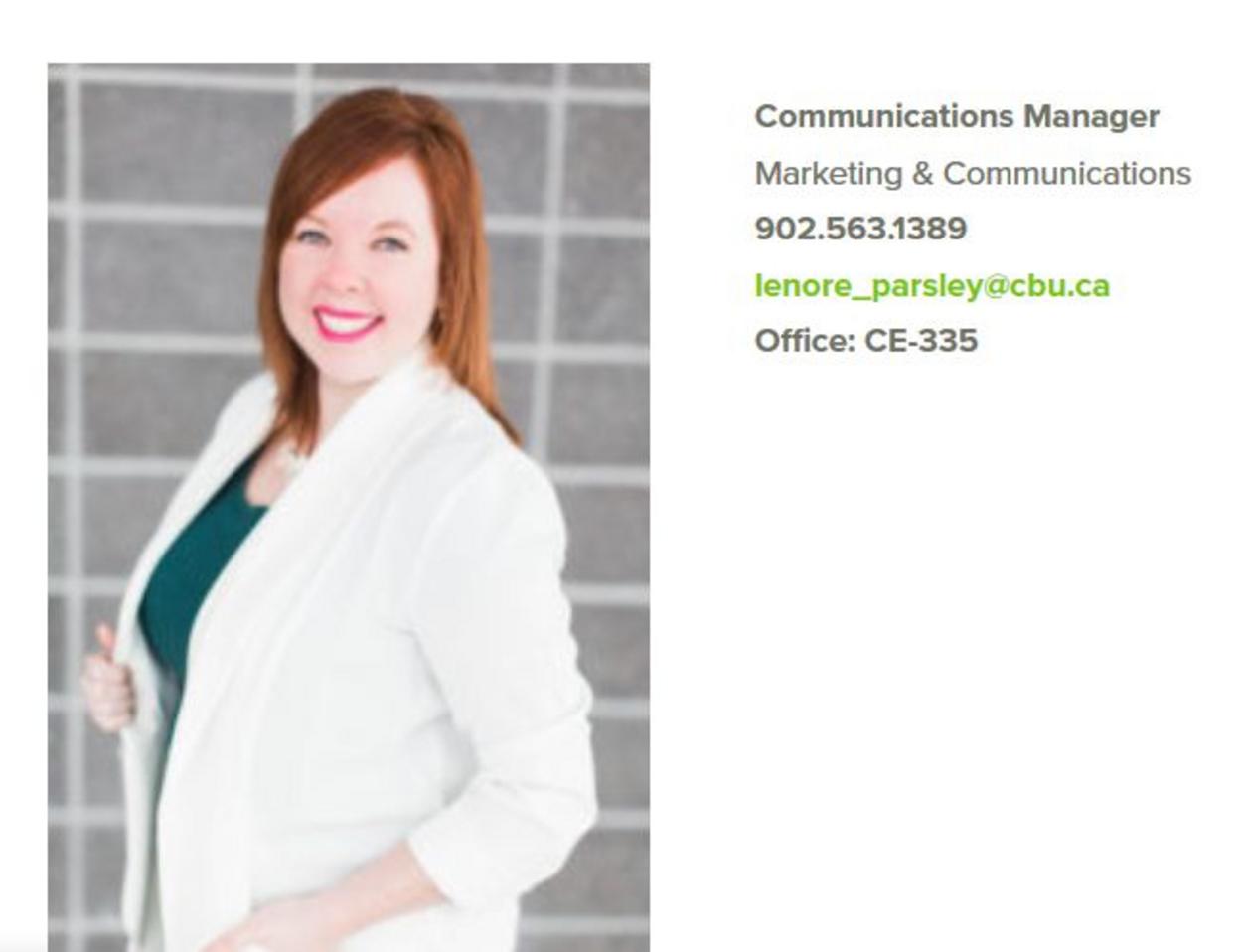 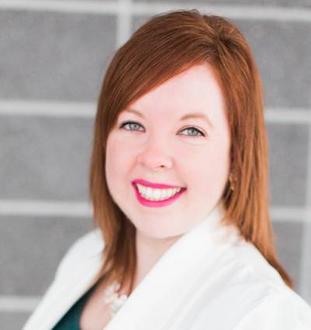 The Elected Leaders who didn't listen or care to call us about Parade Safety.

We reserve the right to call out

CAPE Brenton University for their complete lack of any written parade safety rules.  They refuse to provide what safety best practice they have or had.

Emergency crews responded after a child was hit by a float at the Pride Cape Breton parade in Sydney, N.S., on Saturday. (Submitted)

A boy was hit by a float at the 2019 Cape Breton Pride Parade in Sydney, N.S.

Cape Breton Regional Police say he was struck by the rear wheel of the parade vehicle he was walking with, injuring his leg.

Police say his injury was not life-threatening. His age has not been released.

The incident happened Saturday near the front of the parade, shortly after it started.

Emergency crews responded and the parade was halted for about 20 minutes before resuming. 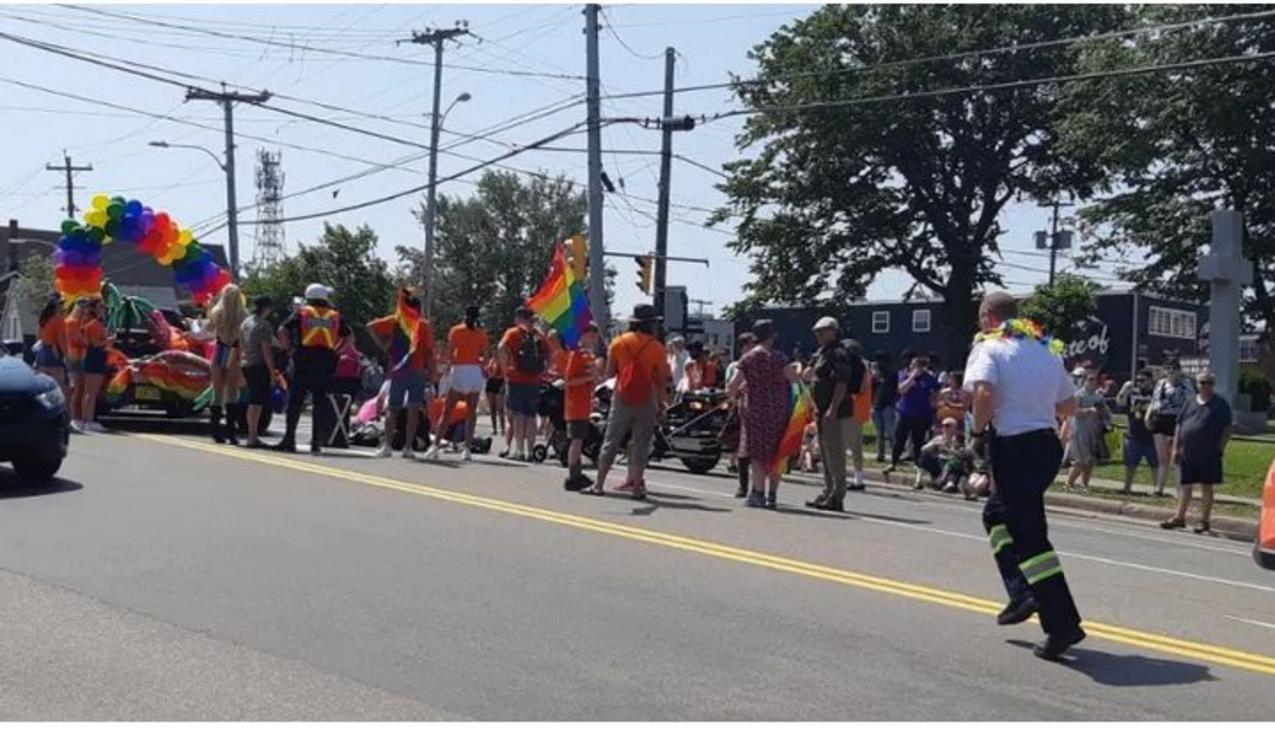 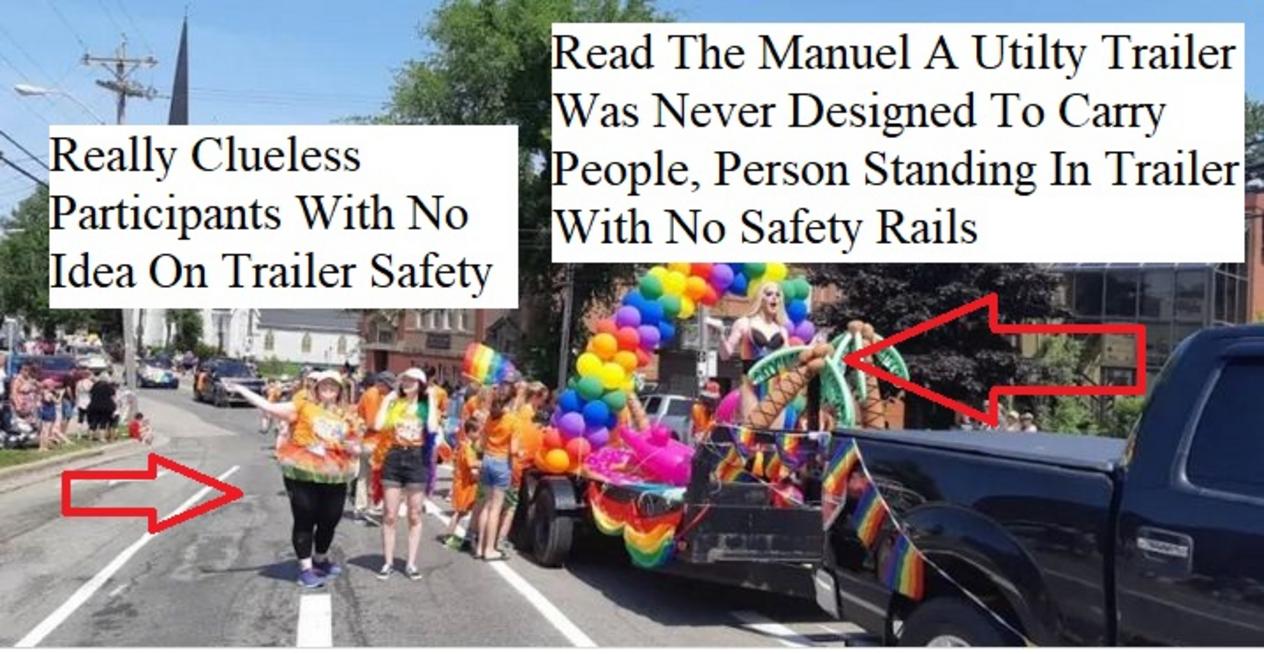 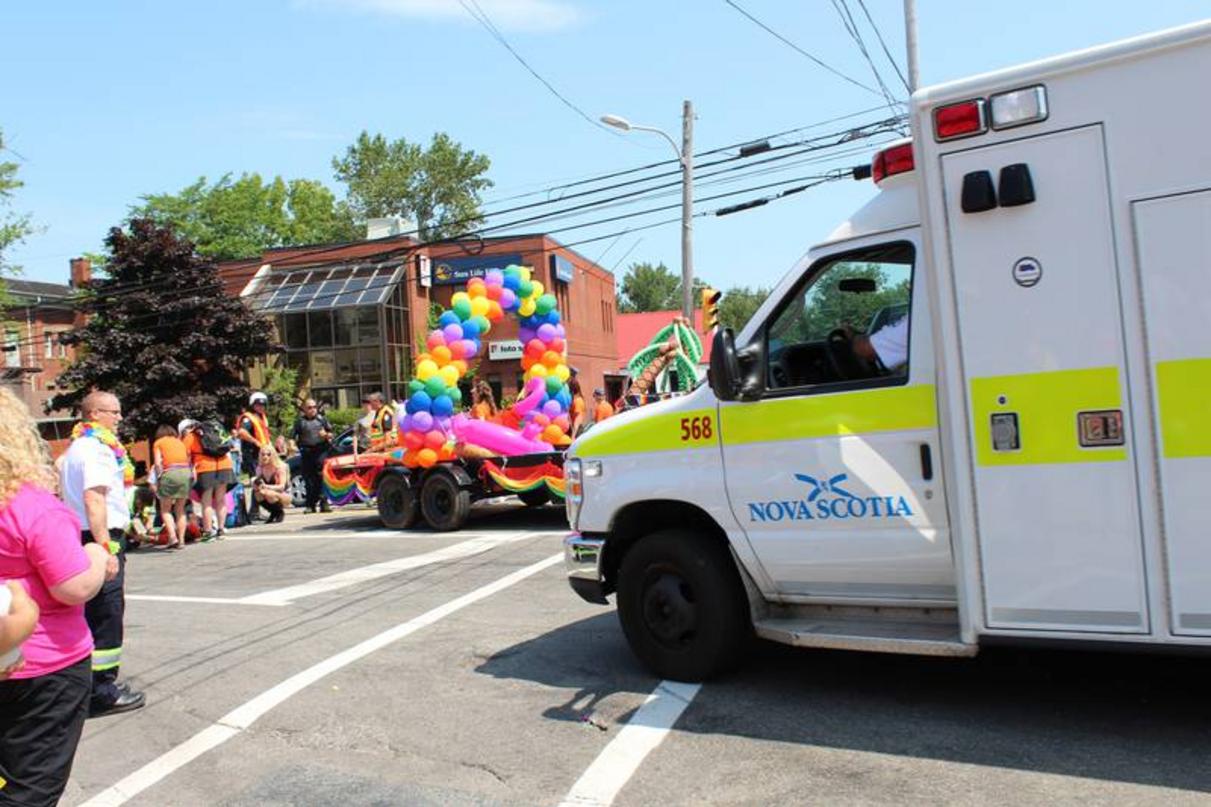 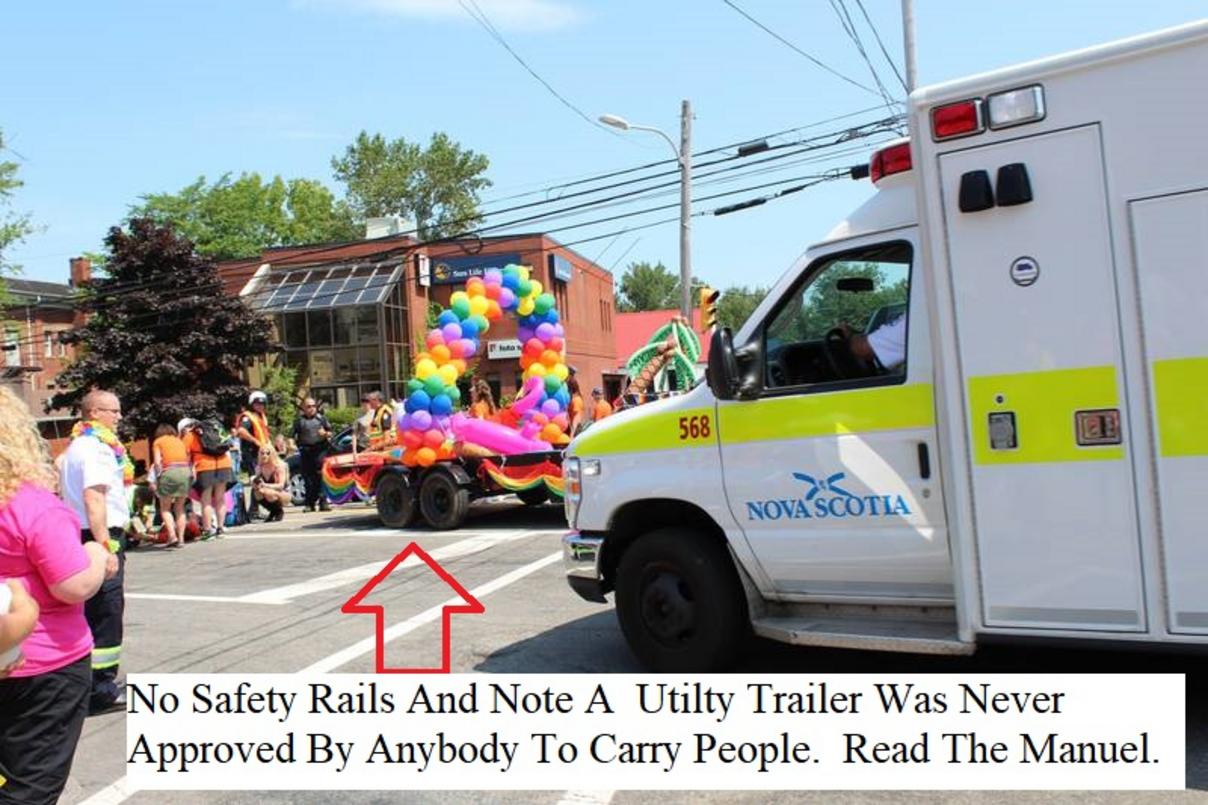 It happened again and for some reason our public safety officials keep ignoring our repeated warnings.

No National Mandated Step By Step Safety Program exists and yet all these people keep getting run over.

We Once Again Issue Our Emergency Safety Declaration Without Proper Safety Standards Parades Are Dangerous!

Boy Run Over At Nova Scotia And They Did Nothing To Prevent Why? Boy recovering after being hit by float at Sydney pride parade

We are responding to yet another totally preventable parade float accident that occurred in Cape Breton Regional Municipality where a child's leg was run over.  It is heartbreaking time and time again we at www.paradesafety.org has to document and then call our elected leaders about our 10 best practice parade safety program.

We are the authority on this subject as we note that not a single government agency wants to mandate a National Parade Safety Standard with our help to prevent over 20 deaths a year now and many injuries when we include hay rides.

We received a call from Nova Scotia Leadership David Burchill who promised us a copy of the improved "Parade Safety Standards" of yet another tragic death of a child run over by Santa Clause in Nova Scotia Yarmouth N.S.  My god have we already forgotten her name and why she died?

In case the memories of our elected officials are short here is what happened to her she was a 4 year old girl who died after a preventable tragic accident at a Santa Clause parade in 2018.  A witness described a scene of terror that shattered the small port town's holiday celebration.

Our urgent National Safety Parade Alert needs to be paid attention to as the upcoming "Parade Season Of Labor Day" is fast approaching and once again at least 4 parade participants will either fall off an illegal parade float or get run over.

In closing we point out that if people read the manuel of a Utility Trailer it clearly states that these trailers were never designed to be used to haul people.  We have provided Penn State University our 10 points safety program which they incoporated that for some reason no municipality wants to mandate in their future parades.

This is a fact in Nova Scotia "There are no standard regulations for maintaining parade safety in Nova Scotia Period".  Prove us wrong and by the way the 4 year old that was run over by Santa Clause her name was MaCali Cormier.

Then Our Letter To an editor :