Coeur d’Alene, ID – Two motorists are in serious condition after police say a “major equipment failure” caused the trailer of a semi-truck to unhitch and crash head-on into a car on Wednesday.

The Idaho State Police (ISP) reported the incident took place about three miles south of Coeur d’Alene in the northbound lanes of US-95 around 8:15 a.m. on August 14.

According to the ISP, a 2014 Peterbilt tractor-trailer driven by Wilbert Kahoonei, 56, of Puyallup, WA, was traveling southbound on US-95.

Kahoonei was negotiating a right-hand curve when trailer became unhitched and traveled into the northbound lane, authorities said.

The tractor-less Wabash trailer then collided head-on with a gray 2015 Nissan Altima near mile marker 426, according to investigators.

The sedan was being driven by 25-year old Nicholas Spooner, with Timothy Spooner, 59, in the passenger seat. Both men are from St. Maries.

Corporal Andy Hodl of the ISP, a responding officer to the scene, spoke with Transportation Nation Network (TNN) after the accident.

The trailer was resting on top of the sedan and good samaritans “cranked the jacks up” before emergency personnel even arrived, Hodl told TNN.

Once police and firefighters were on-scene, they were able to lift the trailer up more and extricate the men.

Hodl told TNN both men were “unconscious, but breathing” as they were rescued from the crumpled sedan.

The men were transported to a nearby hospital and remain in “very critical” condition.

According to Hodl, Kahoonei had pulled over to the side of the road when he realized the trailer had become detached.

Kahoonei was backing the tractor up when he noticed the accident.

The truck driver, who was understandably in shock, was “definitely cooperative” during the preliminary investigation, Hodl told TNN.

Kahoonei and his passenger in the semi, Darnelle Kahoonei, 51, of Graham, WA, were uninjured.

ISP says the circumstances of the accident are still under investigation, but “it appears to have been caused by a major equipment failure on the part of the semi-truck.”

A spokesperson for ISP, Chris Schenck, said he can’t recall seeing a trailer become unhitched from a semi in his almost-30 years of work.

The highway was blocked for nearly four hours after the accident.

According to signage on the side of the trailer, the trailer belonged to Mergenthaler Transfer and Storage.

Data from the Federal Motor Carrier Safety Administration shows Mergenthaler is headquartered in Helena, MT and has 230 drivers.

Hodl said the trucking company has been “very cooperative” in the investigation thus far.

The company’s vehicle inspection out of service percentage is in line with the industry average of 20%.

TNN will continue to keep you updated on new developments in this story. 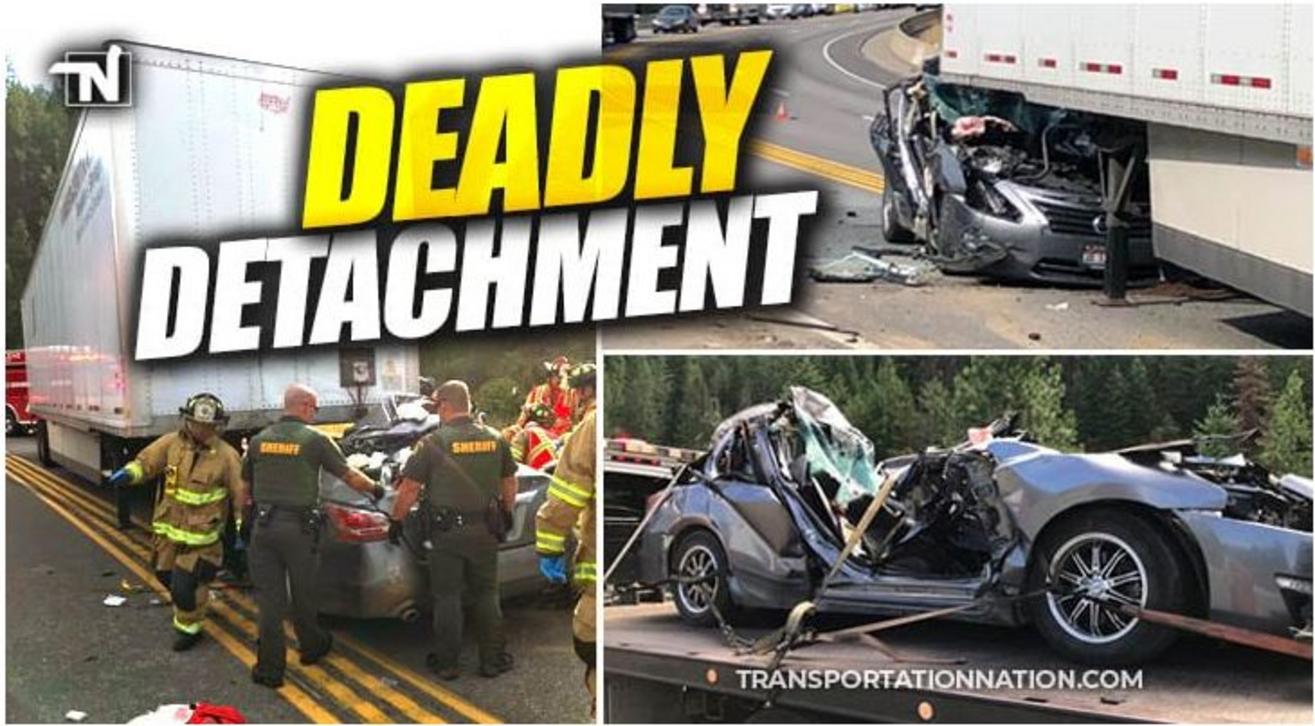 Click Here For More Background On This Preventable Loss Of LIfe
Everybody has had warnings....Yet The Government Keeps Trying To Shut Us Up.  Click Here
Pregnant Mother And Mother Of 3 Killed By A Defective Flying Axle's..Why?  Click Here

“Major Equipment Failure” Results in Detached Trailer Crushing Car"  Memo We Need To Know Why And What!

Coeur d’Alene, ID – The driver of a sedan that collided with a semi-trailer that became unhitched last Wednesday along US-95 has succumbed to his injuries.

Nicholas Spooner, 25, of St. Maries passed away on Monday following the collision, his family reported.

Spooner’s family posted on social media he was taken into surgery around 7 a.m. on August 19, where his organs were harvested for donation.

It was known on Thursday of last week that Spooner would not recover from the injuries sustained in the accident.

As Transportation Nation Network (TNN) reported last Wednesday, Spooner was driving a 2015 Nissan Altima in the northbound lane of US-95 around 8:15 a.m. on August 14 with his father, 59-year-old Timothy Spooner, in the passenger seat.

According to the Idaho State Patrol (ISP), a 2014 Peterbilt tractor-trailer was negotiating a right-hand curve in the southbound lanes of US-95 when the trailer became unhitched and drifted into the northbound lane.

The Wabash trailer collided head-on with the Altima near mile marker 426, authorities reported.

Corporal Andy Hodl of the ISP told TNN the day of the accident that both men were “unconscious, but breathing” as they were extricated from the crumpled sedan.

The trailer had to be jacked up in order to rescue the men from the sedan, Hodl said.

Both Spooner men were transported to area hospitals in “very critical” condition.

According to family social media accounts, Timothy was recently airlifted to Seattle and has undergone multiple surgeries on his arms, and additional surgeries are scheduled for his face.

A family member said they are “not sure the total extent of the traumatic brain injury” suffered by Timothy.

The driver of the Peterbilt, Wilbert Kahoonei, 56, of Puyallup, WA, and his passenger, Darnelle Kahoonei, 51, of Graham, WA, were uninjured in the accident.

Hodl told TNN Kahoonei and the trucking company were “very cooperative” during the preliminary investigation.

ISP says the circumstances of the accident are still under investigation, but “it appears to have been caused by a major equipment failure on the part of the semi-truck,” though ISP representatives have not ruled out a “freak accident.”

The truck and trailer was owned by Mergenthaler Transfer and Storage, headquartered in Helena, MT.

The company’s vehicle inspection out of service percentage is in line with the industry average of 20%.

You can read more about the accident HERE.

TNN will continue to keep you updated on any new developments in this story.

Corporations continue to non-disclose or minimize their defective products and then lobby and provide miss-information to the public.  Just like these quotes:

A spokesperson for ISP, Chris Schenck, said he can’t recall seeing a trailer become unhitched from a semi in his almost-30 years of work.

Really?  We Spoke to the NTSB and have been constanilly e -mailing our safety concerns for over 15 years it this the Government and our public safety officials who speak before they do the research.

We need this vital information and data to find out what is defective and how to prevent further loss of innocent lives.

When we can prove without a doubt that the Media and Government is covering up these "Total Equipment Failures" and they are failing to act then we have the right to expose and use "Fair Use" in order to expose what is going on.