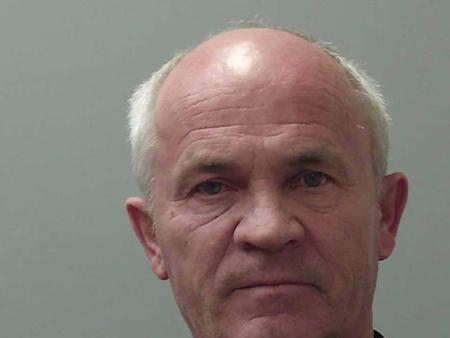 For over 15 Years ...Say Something...Do Something  We have tried and tried.  Questions must be asked:

Why did the entire hub and rim and tire come off?

Who is going to maintain "Chain Of Custody"  Key Evidence will go missing in this massive lawsuit when it is filed.

Could happen to anyone at any time': Flying wheel hub kills pregnant mom of 3, Illinois cops say

Charles Cullen wonders if things could have been different.

Melinda Cullen, his daughter-in-law, was driving home from work on I-80 when the wheel hub of a semi-tractor trailer became detached and smashed into her car’s windshield, Illinois police say. The 100-pound object struck Cullen at around 2:20 p.m. Tuesday near Joliet, Illinois, according to WGN9, and she was rushed to the hospital.

She was pronounced dead after arriving there, NBC Chicago reported.

Cullen was a mother of three daughters aged 15 months, five-years-old and eight-years-old, according to WGN9. She was also pregnant and due to deliver her son in just 10 days.

Her unborn child didn’t survive, according to NBC.

It’s been a tragedy for Charles Cullen’s family, and especially his son Dave.

"You don't expect something like this here, how it happened," Cullen told ABC7. "She was just in that place at that time. I sat up last night wondering if she would have been five minutes or 3 minutes, one way or the other, they would missed it."

"First thing I thought of was that could happen to anyone at any time,” he said. “There was two state police officers next to (the car) and there was a pretty big gaping hole in the windshield right in front of where the driver's face would have been.”

Police said that a wheel hub from the truck’s rear tractor axle detached, causing the object to fly and strike Cullen and her 2016 GMC Acadia, according to Patch. Authorities announced charges against the truck’s driver, 59-year-old Antanas Serevia.

They allege that he violated the Federal Motor Carrier Safety Act by having unsafe equipment on his vehicle.
Read more here: http://www.miamiherald.com/article204077024.html#storylink=cpy 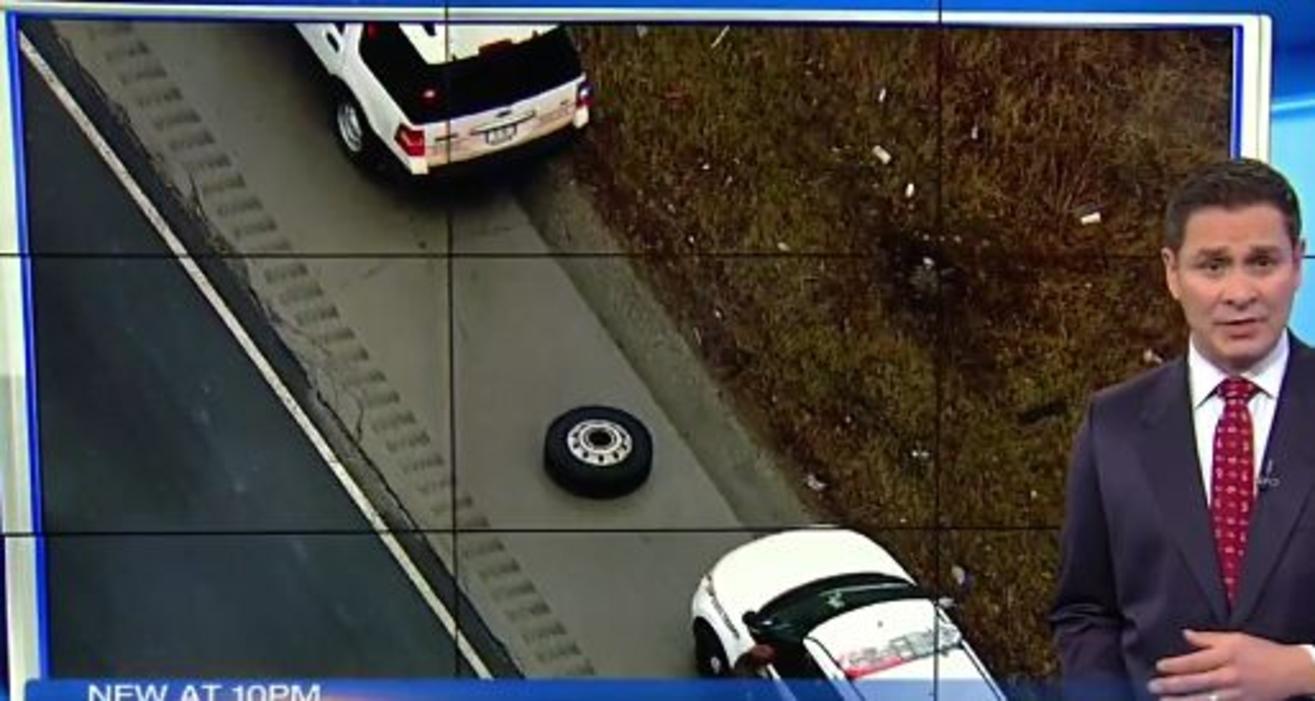 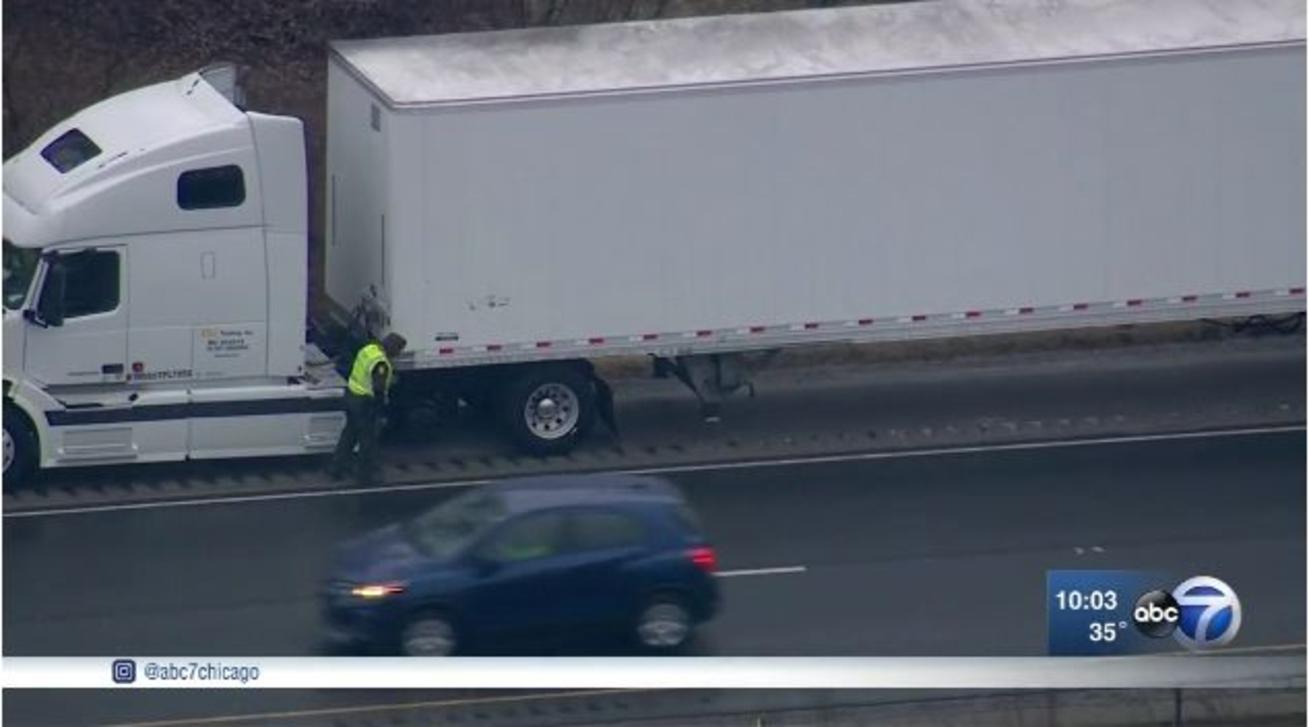 I-80 Trucker Blamed In Death Had 2016 DUI Arrest
Antanas Sereiva of Bolingbrook has been in trouble with the law prior to Tuesday's deadly incident on I-80.

The Will County semi-truck driver being blamed by the Illinois State Police for causing Tuesday afternoon's horrific fatality in Joliet on Interstate 80 has had multiple brushes with the law over the past few years, Joliet Patch has uncovered. On Tuesday afternoon, Melinda Cullen, 38, of Coal City was killed as she headed westbound through Joliet along Interstate 80 near Rowell Avenue. Police say the brake drum dislodged from a Bolingbrook man's semi as Antanas Sereiva, 59, was driving eastbound on I-80.

The Illinois State Police's preliminary investigation revealed that the wheel rim then became detached from its rear axle of Sereiva's semi and the wheel rim crashed through the Coal City woman's windshield, killing her. Police said that the 59-year-old Sereiva has been charged with a federal motor carrier safety act violation for having unsafe equipment.

According to state police, Sereiva was driving a 13-year-old semi, a 2005 Volvo Truck tractor, and a Hyundai semi-trailer at the time of the Coal City woman's death.

The Reeves Funeral Homes in Coal City is handling for the funeral arrangements for Cullen, who was several months pregnant with her son Jaxson Cash Cullen at the time of Tuesday's tragedy.

Her obituary notes that Cullen, whose maiden name was Cortez, grew up in Coal City and graduated from the Coal City High School Class of 1998. She obtained her bachelor's in communications from Southern Illinois University in Carbondale. She later worked for Commscope Technologies in Joliet. At the time of her death, she was employed in Tinley Park for Panduit.

"A woman of strong will, Melinda loved to cook and had a smile that could lighten up any room. She also made special time for her family or anyone in need. Family was of utmost importance to her, and she will most be remembered as a devoted mother that leaves behind a beautiful family that will miss her very much," her published obituary notes. Cullen's visitation is Friday and the funeral is Saturday.

It turns out that Sereiva does not have a clean driving record, and he's also been in trouble with the law here in Will County for issues involving violence.

Less than two years ago, in May 2016, Sereiva was arrested in connection with charges of driving under the influence involving controlled substances in the state of Alabama, according to arrest records. That arrest occurred in Huntsville, which is in Madison County, Alabama.

Locally, in 2014, the Will County State's Attorney's Office charged Sereiva with two counts of domestic battery and one count of resisting arrest after an April 20, 2014 disturbance call to his home in Bolingbrook in the 1200 block of Jennifer Lane.

According to the criminal complaint, Bolingbrook Police officers arrested Sereiva after he pushed and kicked a family member, and then he struggled with Bolingbrook officers during the handcuffing process.

Records at the Will County Courthouse show the judicial system needed to utilize a Russian-Lithuanian interpreter for the defendant.

That summer, in 2014, Sereiva reached a plea bargain and was convicted of one of the battery charges. He was put on a year of probation, given fines and ordered to perform 100 hours of public service, court records show. In January 2015, the parish administrator at a Lithuanian Catholic parish in Chicago, Nativity BVM Church on South Washtensaw Avenue, wrote Will County's court officials informing them Sereiva "has been working at our church for his service. He has completed 100 hours of service supervised by Father Jaunius Kelpsas." 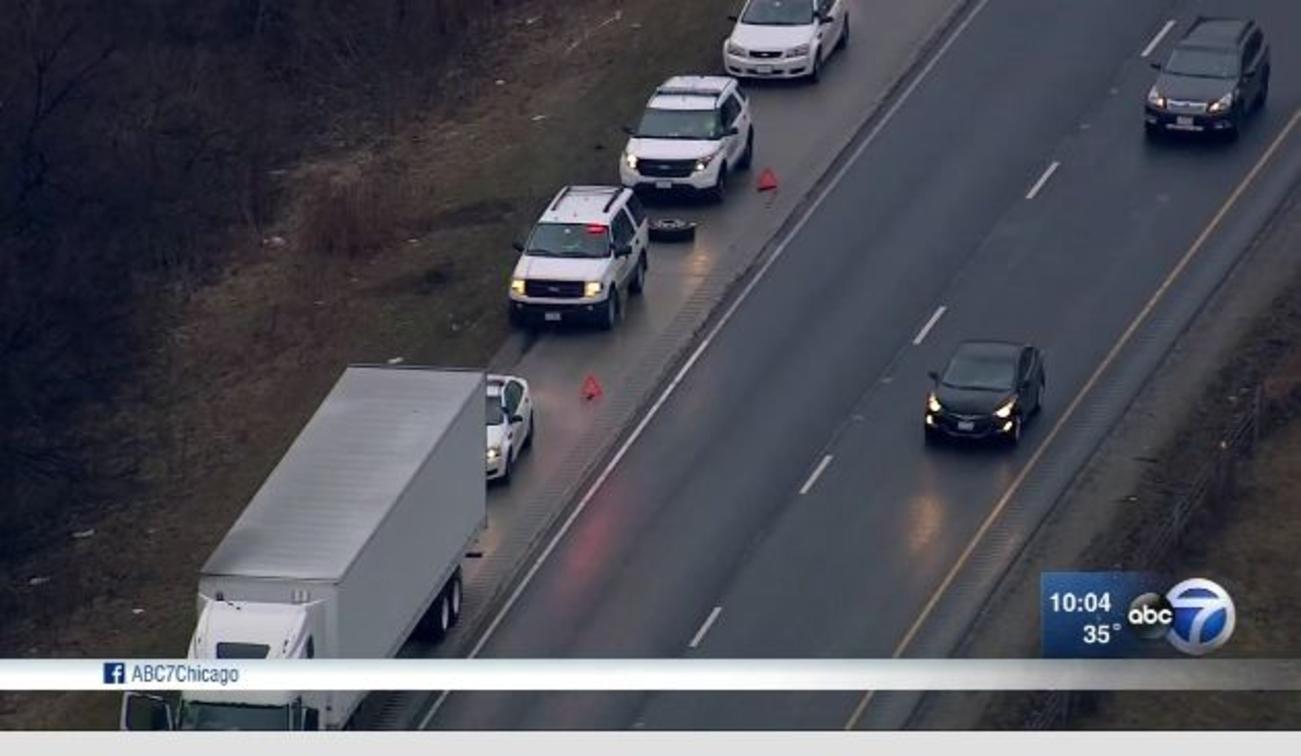 Video One Of Flying
Tire Report 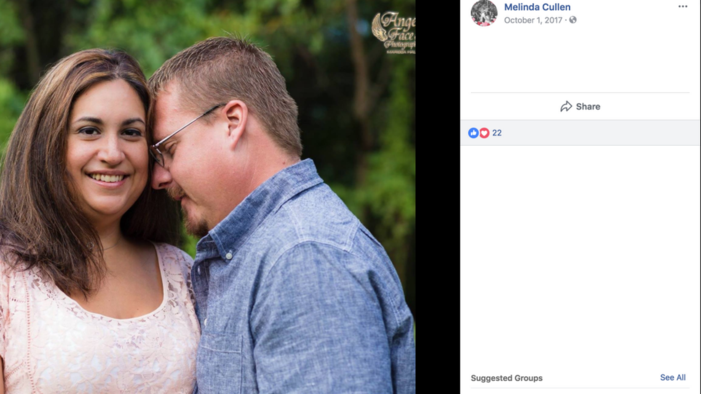 Video Three Of Yet
Another Flying Fire
Accident 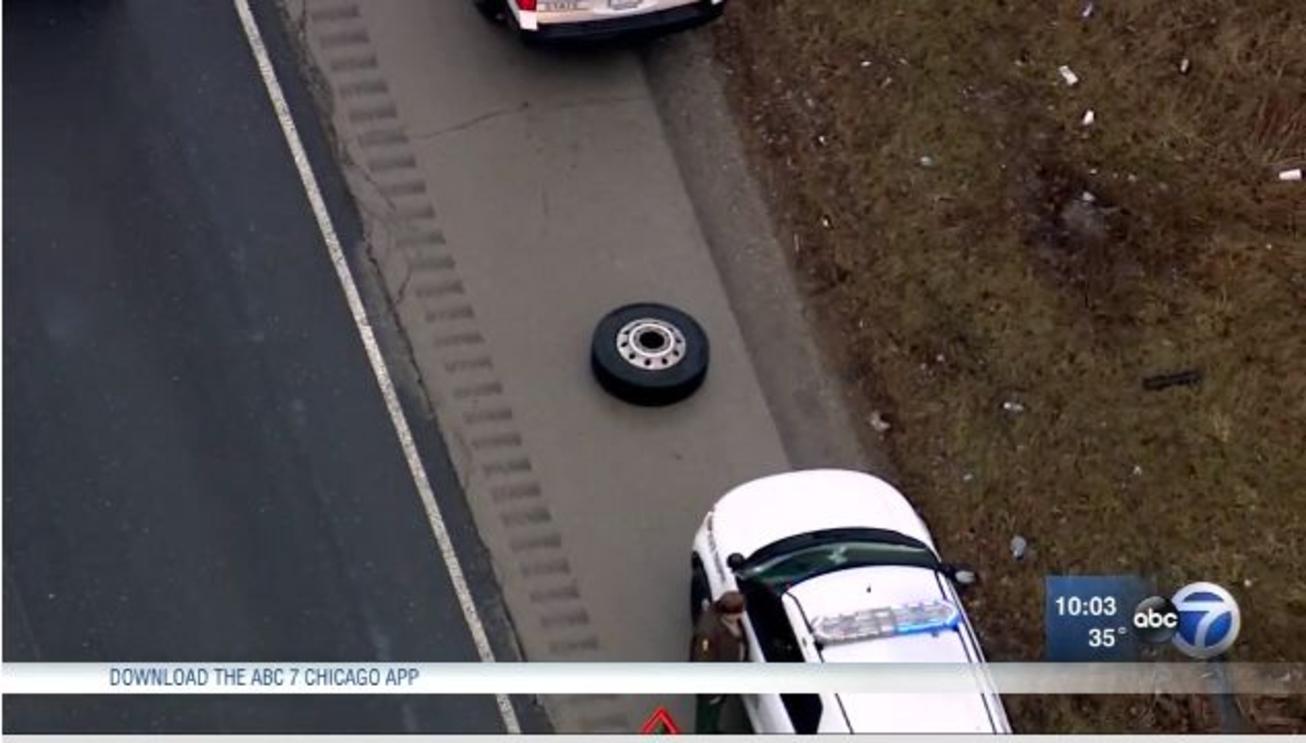 Click Here For Our
Coverage Of Other
Flying Tires 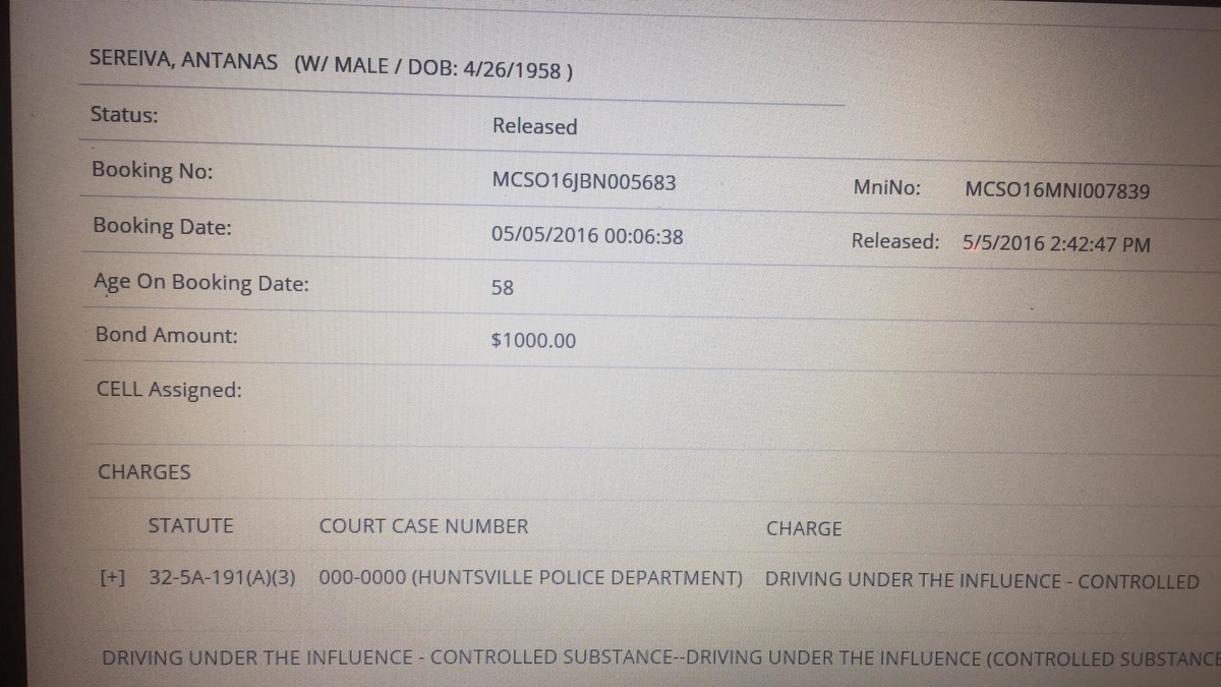 JOLIET, IL - Will County Coroner Patrick O'Neil announced on Tuesday night that the woman who was killed while traveling along Interstate 80 in Joliet was a resident of Coal City. O'Neil said that Melinda B. Cullen, 38, was driving westbound on I-80 when the tire rim from a semi tractor-trailer driving in the opposite direction, heading east, came off the truck. The tire rim went through the Coal City woman's windshield, causing her to crash near Rowell Avenue.

The Illinois State Police said the westbound crash occurred at 2:18 p.m. O'Neil said Cullen was rushed to Presence Saint Joseph Medical Center in Joliet, where she was pronounced dead. An autopsy is set for Wednesday and funeral arrangements are still pending, he said.

Melinda Cullen's Facebook page profile identified her as a mother, daughter, sister and wife, and noted that she had studied speech communication at Southern Illinois University in Carbondale.


"According to preliminary investigation, a truck tractor semi-trailer was traveling eastbound on I-80 near Rowell Avenue when its wheel hub came detached from it's rear tractor axle. The wheel hub crossed over into the I-80 westbound lanes entering the windshield of a passenger car striking the female driver," the Illinois State Police revealed.

The woman in the car was rushed to a Joliet area hospital, where she was pronounced dead. The State Police have their crash reconstruction officers and the Illinois State Police commercial motor vehicle officers on the scene investigating Tuesday's fatality.

At about 5:30 p.m., State Police announced that all lanes had been cleared for traffic.

This is a developing story. Patch will bring you updates as more information becomes available.