WILLIAMSTON, Mich. (WDIV/CNN) – Johnnie Lowe says he’s a lucky man after a metal beam sliced through the windshield of his box truck and narrowly missed him.

A Michigan man feels very lucky to be alive after a steel beam crashed through his front windshield, missing his chest by a half foot. (Source: WDIV, Johnnie Lowe, CNN)

Lowe was behind a truck on his way to Lansing to pick up some auto parts when the beam fell off the back of the flatbed and hit the roadway on I-96 last week.

"When it bounced off the concrete … I knew this was going down,” he said. “I just braced myself."

The windshield shattered. Glass was everywhere.

"I'm looking at my windshield with a big slice right in front of me with a big 6-foot piece of steel sticking out of it,” Lowe said.

The end of the beam was just 6 inches away from his chest. The edge of the dash and the steering wheel stopped it from going any farther.

"It was like being in the middle of an explosion of glass,” Lowe said. “When I got home, I had to take a vacuum cleaner and suck out glass out of my ears."

"I'm one lucky man,” Lowe said. “I feel like I need to go play the lottery. Definitely."

Police are trying to track down the driver of the truck that lost the beam and didn’t stop after the accident.

Johnnie Lowe keeps hearing the sound of the crash that left a steel beam inches from his chest.

Lowe, 49, of Wayne was driving a box truck about 1:30 p.m. Thursday westbound on I-96 near Williamston on his way to Lansing to make a pickup for his company DNC Logistics when he saw something slide off the back of a stake truck moving into the fast lane.

Lowe watched as a beam bounced off the tail end of the rusty-red stake truck with no gate on the rear. The beam did somersaults, like something out of a “Transformers” movie, as it drew closer to him, he said.

For a moment as it bounced, he thought he was safe.

“Then here it came,” he said. “It bounced my way, so I just put my arm up, put my hand on the back of the steering wheel, put my foot on the brake, eased the brake.”

“My life flashed before my eyes,” he said.

Father to three biological children and stepchildren, he thought of his family, he said.

He heard a sound like an explosion as the windshield shattered, and then the sound of cars still going by. He aimed for white — snow on the side of the road — as he pulled off and brought the car to a stop.

It felt like his face was covered in blood, but a glance at the reflection in his electronic tablet showed he had just one piece of glass in his cheek he said.

Looking down, he saw his body was covered in glass, but intact, he said. In the decimated windshield in front of him he saw a six-foot steel beam now laying on his dashboard and stopped against his steering wheel.

Lowe called police, his company, and finally his soon-to-be ex-wife in hopes she could calm him down. She did.

He keeps imagining the beam blasting through his windshield and keeps hearing the sound of the crash, but he wants to push through, he said.

[A photo provided by Johnnie Lowe shows his work truck after a beam slammed through his windshield about 1:30 p.m. Thursday, Feb. 6, 2020, as he drove westbound on I-96 near Williamston.]

A photo provided by Johnnie Lowe shows his work truck after a beam slammed through his windshield about 1:30 p.m. Thursday, Feb. 6, 2020, as he drove westbound on I-96 near Williamston. (Photo: Johnnie Lowe)

By Monday, he was back to work. He almost took the offer of more time off before returning to work, but said he’s a “gung-ho kind of guy.”

He’s the kind of guy DNC Logistics is proud to have on the team, said Jerry Babcock, general manager for Taylor-based company. Lowe has been on the team for a few months and it was his first job for the day.

When he first heard dispatch of the crash relayed to him, Babcock feared the worst for Lowe. Learning Lowe was alright, his team was in awe.

“With that 6-foot steel beam hitting the windshield, shattering the window, his eyes closed, I’m sure, at one point, and being able to handle a 26,000-pound vehicle is amazing,” he said

Lowe has driven limousines and party buses, and worked for two trucking companies over a little more than six years, he said. It’s lucky he had the training to handle the crash.

[A photo provided by Johnnie Lowe shows his work truck after a beam slammed through his windshield about 1:30 p.m. Thursday, Feb. 6, 2020, as he drove westbound on I-96 near Williamston.]

A photo provided by Johnnie Lowe shows his work truck after a beam slammed through his windshield about 1:30 p.m. Thursday, Feb. 6, 2020, as he drove westbound on I-96 near Williamston. (Photo: Johnnie Lowe)

He wants others to remember to secure their loads and stop using their phones while driving.

Police couldn’t immediately be reached for comment, but Lowe said he wants them to find the driver whose beam nearly impaled him.

“I could’ve got killed,” he said. “That steel beam could’ve gone right through my heart.”Contact Darcie Moran at dmoran@gannett.com. 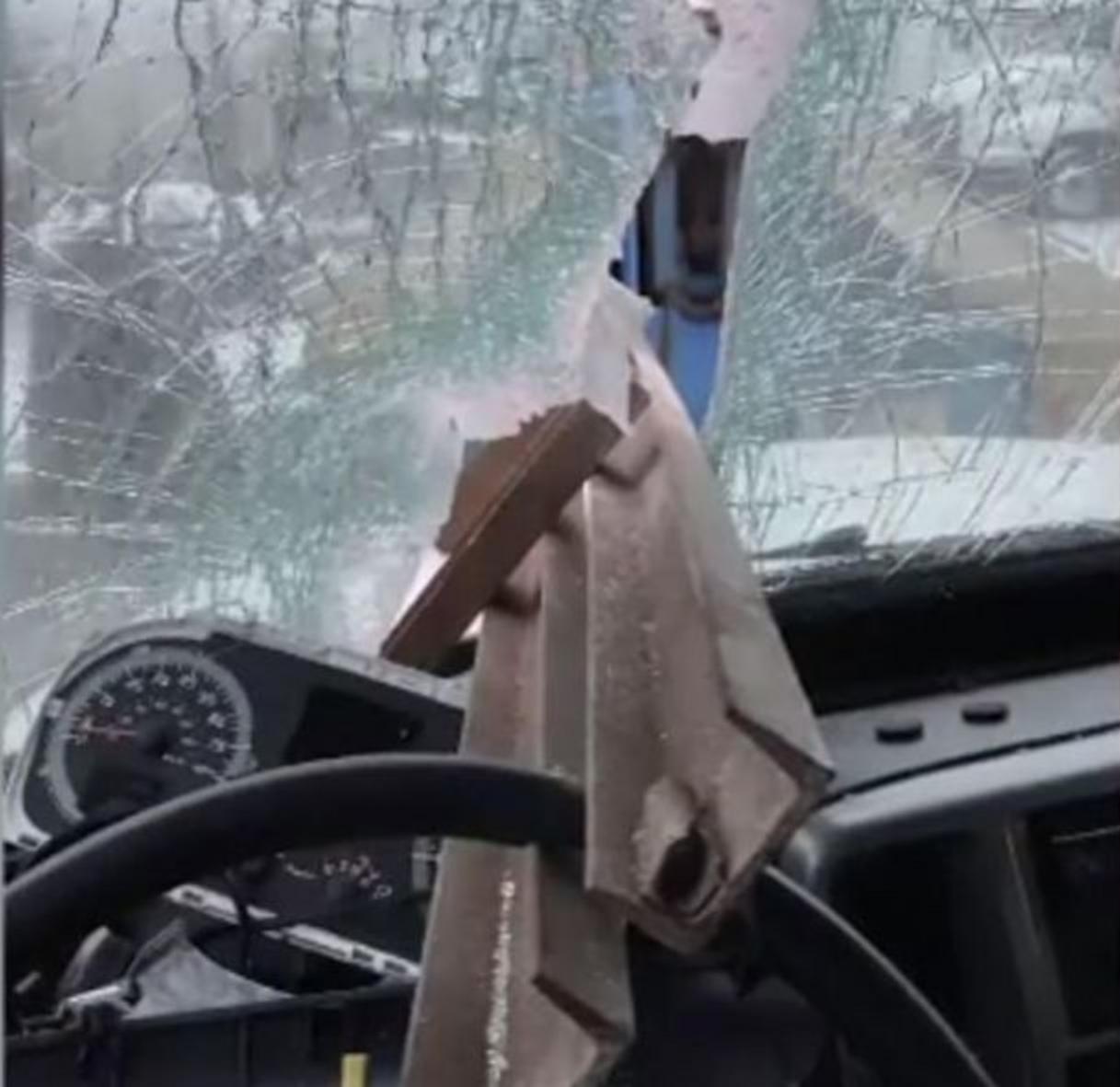 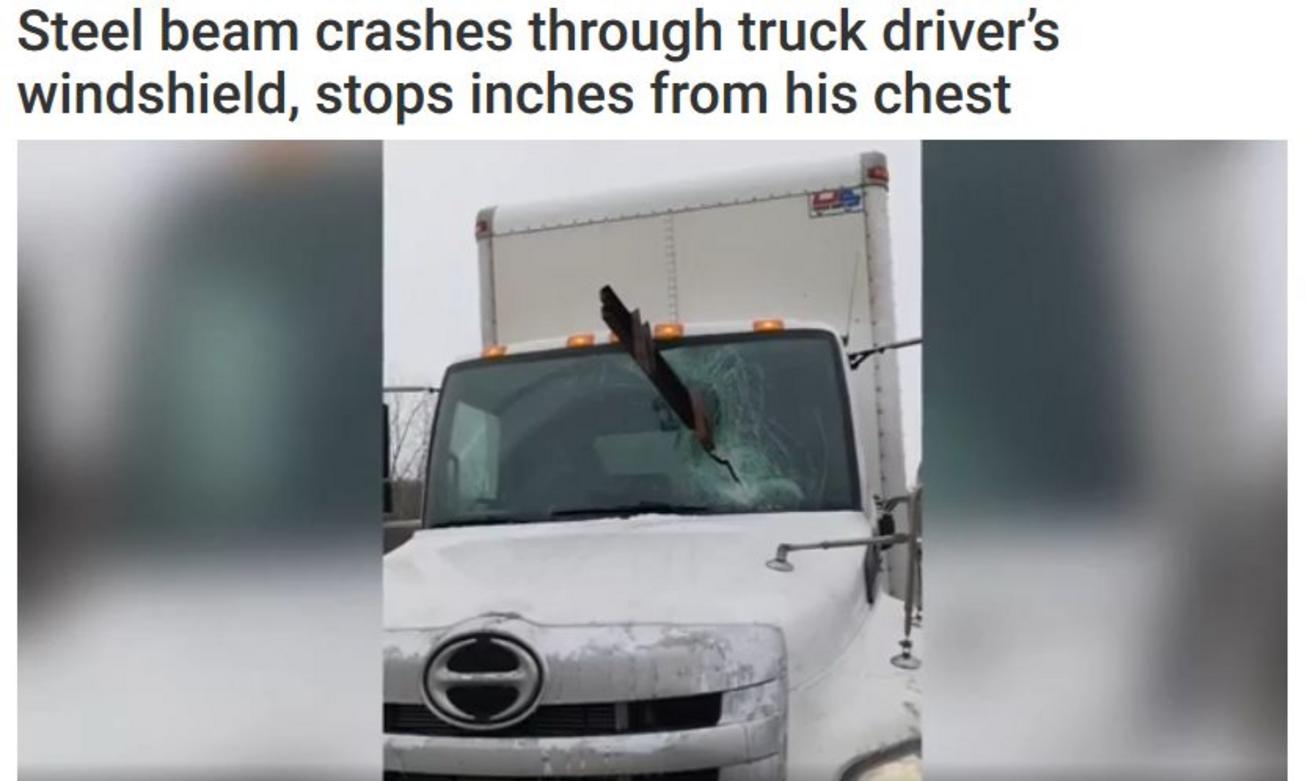 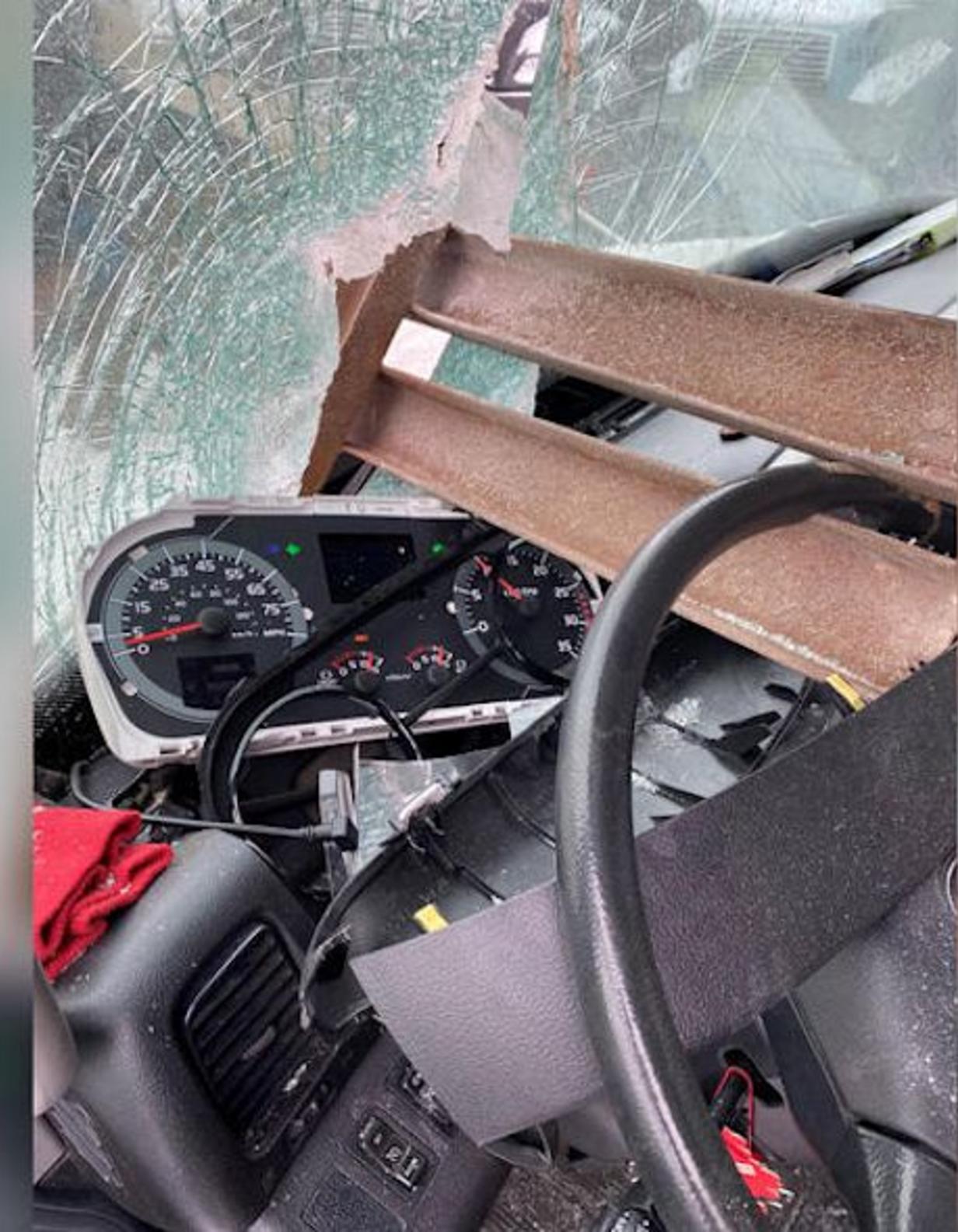 We are the only organization that has been trying to address not only loose loads but loose flying objects and flying tires and we have been viciously attacked and suppressed not only by the media but by the corporations that lobby our public safety officials to look the other way.

The most insidious of media bias is the continued bias of omission:

When they knowingly and intentionally suppress our stories of over 500 deaths a year and increasing at a rate of 20% year over year with over 35,000 injuries it does a dis-service to innocent Americans.

Because it does not fit the desired narrative of corporations, insurance companies, local governments and utility trailer companies we simply ask don't you find it odd that we are the only ones trying to not only save lives but prevent financial harm to ordinary citizens.