Back Off?  For God's Sake People Are Getting Killed By A Defective Products and we are in debt trying to expose the truth and everybody is getting "Paid Off" to shut up.  Could Boeing Corporation get away with it?  They almost did with the 737 MAX 8 Right?

Ken Green admits he had a "Gag Order" 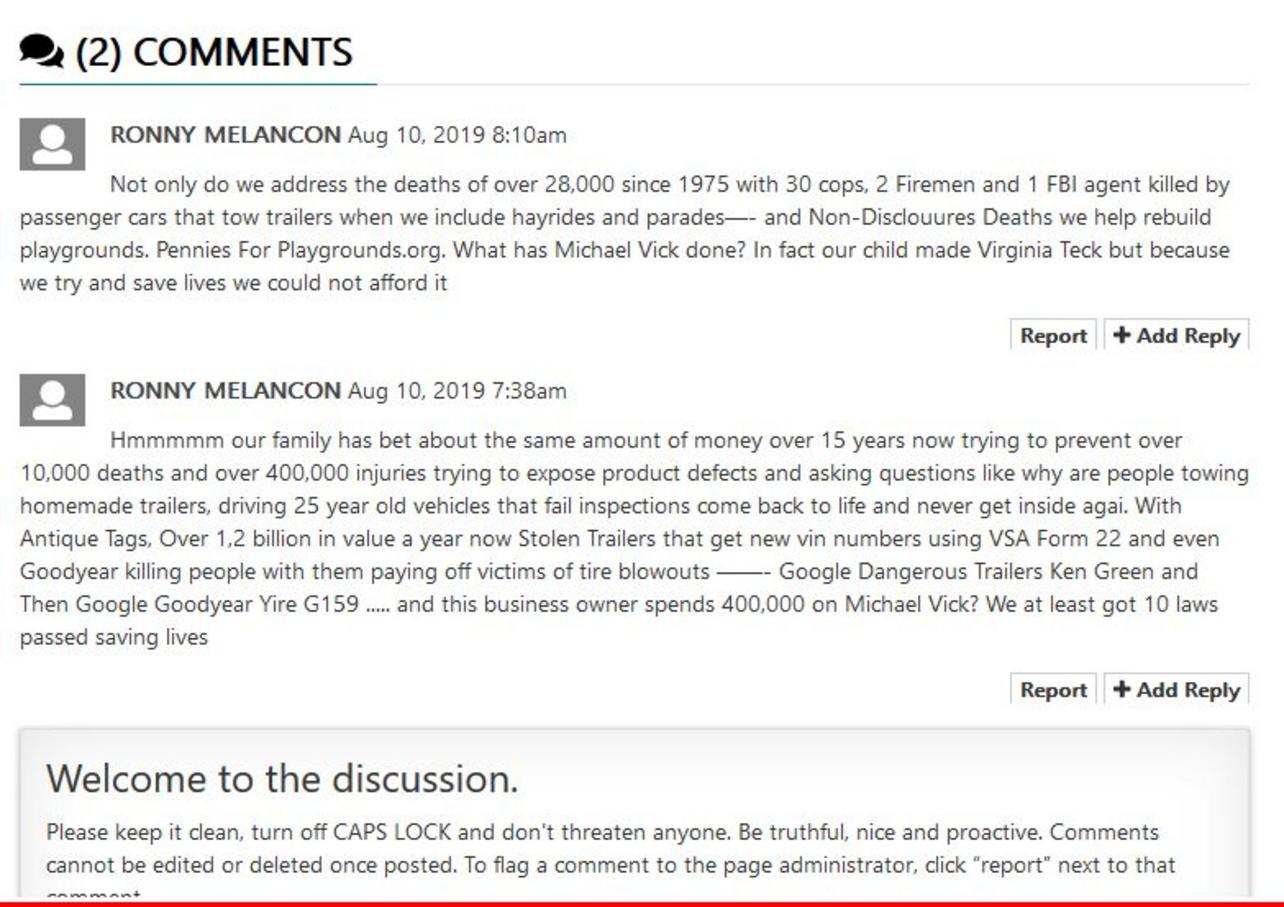 When businessman Jonathan Walker first spoke with Michael Vick — the retired football legend who had a history of debt problems and served prison time for dogfighting — Walker didn't dwell on Vick's falls so much as how he got back up.

"I liked the turnaround story he had," says Walker.

In September, Walker says, the two agreed to an unusual transaction, one that Walker hoped would propel his company into the potentially lucrative market of retired and current professional athletes willing to sell future income streams for immediate cash. Vick, 39, had played quarterback in the National Football League over 13 years, including stints with the Atlanta Falcons and Philadelphia Eagles, went on to work as a TV commentator and a coach, and had contacts throughout professional football.

"There was talk, with one of our affiliates, about making Vick the spokesman for this kind of deal," Walker says.

But that was before the deal soured and landed in ongoing legal proceedings in a Maryland courthouse.

Walker's company, NV Partners LLC, alleges that Vick received $400,000 in September 2018 and in exchange promised to have up to three years of future earnings rerouted from two of his employers to NV Partners.

But, NV Partners alleges, Vick asked only one of the employers to reroute the payments, was slow in doing so, and within two months had the payments routed back to him.

"I was flabbergasted," Walker says.

His company's legal filings assert NV Partners hasn't been paid in the deal since Jan.25.

The company's terms to Vick were formidable, according to court papers, and called for him to sign over nearly $800,000 in future earnings. NV Partners's filings include an agreement, signed by Vick, authorizing the company to ask a court to approve a judgment quickly without the company having to file a lawsuit.

Part of what Vick owes, NV Partners alleges, was money he would have received as a coach for an upstart professional football league called the Alliance of American Football, where Vick worked for several months before the league folded in April. And the company claims Vick owes late payments of $5,000 a day as well as hefty attorney fees.

"I admired him as a football player. Fun to watch. Courageous. Smart," says Daniel Wright, a lawyer for NV Partners. "But business is business."

Vick did not respond to voice or text messages seeking comment. His attorney, Lawrence Woodward, declined to address the specific allegations against his client or the terms of the deal. But Woodward said Vick was aware of the matter.

"Michael knows that it's a business issue he's got to address," Woodward said. "Michael will meet his business and financial obligations."

"We'll try to find a solution if we can," says Walker, adding that he is feeling increased pressure from his creditors over the deal with Vick. "In his mind, maybe he thinks he's going to make us whole one day. But reality doesn't allow us to float along on his timeline."

His company filed the claim in Montgomery County, Md., the location of a middleman that allegedly brought the parties together.

A football phenom in high school, Vick grew up in Newport News, earned a scholarship to Virginia Tech, and became the first player chosen in the 2001 NFL draft. He signed a $62 million contract.

Off the field, though, Vick and three friends began building a clandestine dogfighting compound in Virginia, which authorities searched in 2007. Vick pleaded guilty in the case and was sentenced to 23 months in prison. While incarcerated, Vick filed for Chapter 11 bankruptcy protection, listing more than $17 million in debts and agreeing to sell off assets that included his stake in ventures such as a wine shop in Atlanta, a horse farm and a car-rental business, according to bankruptcy records.

After his release from prison, Vick soon was playing football as well as ever, and earned the Associated Press 2010 NFL Comeback Player of the Year award. As for his debtors, he repeatedly said he intended to make them whole.

Out in Oregon, a company Walker co-founded, SMA Hub, had spent years putting together deals in the complicated and sometimes controversial world of "structured settlement" purchases.

On one end of Walker's transactions were firms called factoring companies that entered into contracts with people due long-term scheduled payments from personal injury, liability and other lawsuits. The contract terms called for lump-sum payments in exchange for the future funds. On the other end of his transactions were investors who wanted in on the revenue streams but didn't want to be directly involved in them. Since 2013, Walker says, SMA Hub has put together about 3,000 deals totaling about $150 million.

But starting in early 2018, he says, the market for structured settlement purchases cooled. Walker and his colleagues saw opportunity among current and retired professional athletes ready to exchange upcoming revenue for immediate cash.

Vick was among those, court records show.

At the time, he was working as on-air analyst and football expert for "Fox NFL Kickoff," a Sunday show on Fox Sports that previewed upcoming games. Vick had also joined the Alliance of American Football to be the offensive coordinator for its Atlanta Legends team.

The legal claims contend Vick agreed to sign over approximately a year's worth of earnings from the broadcast job, which he still has. It is not clear from the filings what he's paid.

Vick agreed to sign over three year's worth of earnings from the coaching job, for which he was to be paid $120,000 to $180,000, according to the legal claims. Vick left that position in February, and two months later the league filed for Chapter 7 liquidation.

Fox Sports and the Alliance of American Football are not named as defendants and are not alleged to be at fault. It was Vick's responsibility, according to the legal claim, to have the payments routed to NV Partners.

A Fox Sports spokeswoman, Terri Hines, said she could not discuss ongoing court proceedings. Bill Polian, a co-founder of the Alliance of American Football, declined to comment. Two other former executives of the league, co-founder Charlie Ebersol and Kevin Farrell, who headed corporate operations, could not be reached

In studying Vick's past, Walker could see the dogfighting allegations were awful. Federal agents had found more than 50 dogs on Vick's property. Vick admitted to taking part in two hangings of dogs that lost fights, according to federal court proceedings.

But to Walker, Vick's contrition after prison seemed genuine. The Humane Society of the United States enlisted Vick to help lobby for federal legislation that made it a crime to attend an animal fight, according to the Humane Society.

And in his bankruptcy proceedings that stretched for a decade, Vick managed to repay creditors nearly everything. "Paying 99 cents on the dollar, which he did, is remarkable," liquidating trustee Joseph Luzinski said in an interview in 2017 with ESPN online. "It happens in, maybe, one out of 100 cases."

To Walker, that meant something: "In our eyes, him paying off his creditors boded well."

The time has come to fully disclose the decision's I have made to "Better Our World"  to save lives and all the while helping by being used as the "Expert" in why trailers come loose and kill innocent Men, Women and Children.

For my mental health and Well Being.....I need to disclose the truth of why I have hurt my family by my decision alone to sacrifice.

Yes I have personally hoped for the best in people by being the only organization devoted in documenting why so many people are killed now ... over 600 a year and over 30,000 injured by a "passenger vehicle that is towing a trailer"

I am really concerned and yes upset that this company used $400,000 funds on Michael Vick that has done nothing to improve and save lives but our family has spent well over this amount by using "Credit We Didn't Have" to "Hang On" in the hopes that when the the people who we help win settlements we would get the help we so desperately need and prayed for.

Here is the truth yes we have spent well over $200,000 over 16 years on WEB Site's, Paper, Ink, Cell Phone, Computer Equipment, Lobbying, Printing, and even getting 11 laws passed unfunded.

16 years times 45 weeks.....again I spend every week doing this but I want to not become "Fake News"

I simply did not know of the power of a NON-DISCLOSURE I did not comprehend that corporations would pay people off not to come forward with a defective product that they know about but their silence would result in others after them getting killed.

Here is the cold hard truth:

"It's a very interesting article but the reason those families haven't help you (Utility Trailers) is they all signed confidentially agreements, that's pretty obvious if you read the article.  Goodyear has DEMANDED confidentially in every settlement.

Secret settlements should be illegal at the State And Federal level but they are not, that's because no STATES have passed laws appropriate legislation that bans them.  When they affect health and safety,
They Should Be ILLEGAL 0 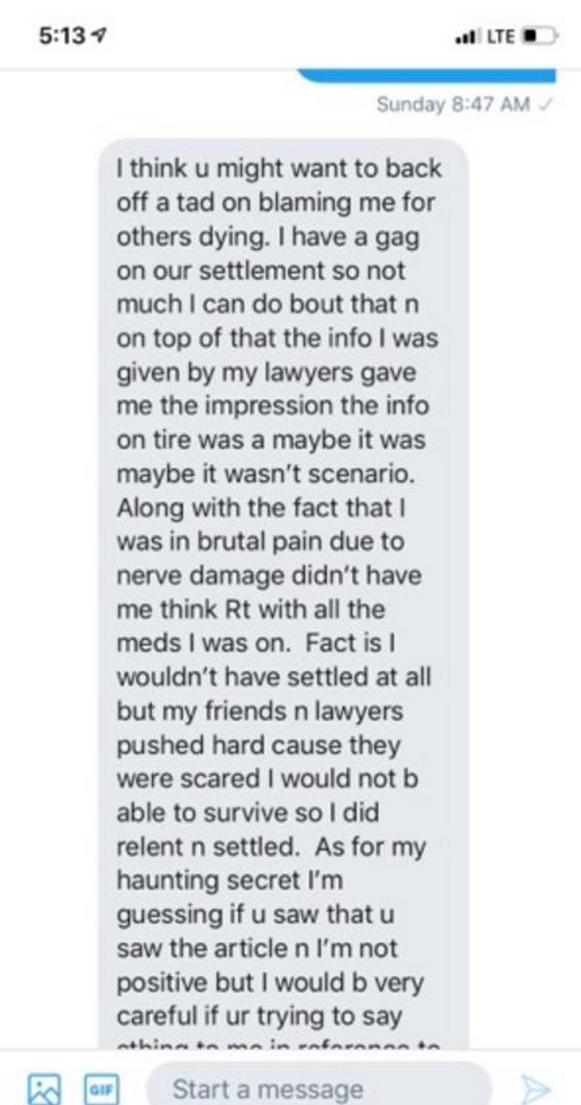