Trailer of supplies stolen from nonprofit that helps kids with cancer

INVERNESS, Fla. (FOX 13) - After years of helping kids with cancer, a local nonprofit now needs help of its own after thieves stole the trailer that houses their organization.

The group, Hannah's Art From the Heart, was inspired by Hannah Douglas. The young girl bravely battled her cancer diagnosis for the majority of her young life. But just months before her eighth birthday, her family was forced to say goodbye.

"She just had a zest for life that was very inspiring and caught on to a lot of people. She affected anyone she met," said Michael Douglas, Hannah's father. "She was a vibrant, vivacious young girl, the toughest girl I ever knew."

But through that devastation came something beautiful as the Hannah's Art From the Heart organization was born.

"My friend, Stacy Griffin, she's a school teacher and her son, Trevor, and Hannah were about the same age," said Douglas. "She came up with the idea of having kids make artwork, and then we would sell that artwork and donate all the proceeds to PCF."

The nonprofit started small but quickly grew. Hannah's Art From the Heart was able to raise over $17,000 for the Pediatric Cancer Foundation in Tampa.

"We have had thousands of pieces of art donated over the past 8 years and have raised over $17,000 for the National Pediatric Cancer Foundation. The children and art teachers of Citrus County have really rallied behind this cause," said Stacy Griffin, the third grade teacher at Rock Crusher Elementary who started the organization.

However, now their fund raising efforts are on hold. Griffin took to Facebook over the weekend pleading for the public's help after the trailer that houses the whole nonprofit organization was stolen from her backyard.

"It wasn't just the trailer," said Douglas. "It was the artwork we were going to use for our next show. It's the tables, it's the banners, the tent, the walls. It's all of the stuff that we use."

The trailer can be replaced, but the artwork that was donated by school kids all across Citrus County is priceless.

"This trailer had a lot of donated artwork, artwork the kids thought would go to help kids with cancer. It’s really invaluable because of all that it means to us," said Griffin.

Douglas is still hopeful the thieves might have a change of heart.

"Our hope is that someone looks inside, whoever took it, and is struck by some conscience to do the right thing," Douglas said.

The theft is a setback, yet Douglas and Griffin said it will take much more to keep them from using Hannah's story to make a difference.

"They may have taken the trailer," Douglas said. "But they can't take her legacy."

The theft has been reported to the Citrus County Sheriff's Office, and they confirmed to FOX 13 that they are investigating.

The trailer is white with a Florida tag of 9504UP.

If you have any information, you're asked to contact CCSO through their non-emergency line at 352-726-1121.

[Lakeland's palm trees are now under attack by a tiny bug called a plant hopper, which spreads disease and kills them.]

When tourists think of Florida, palm trees often come to mind. But the iconic trees are now under attack by a tiny bug called a plant hopper, which spreads disease and kills them.

The bugs are giving Lakeland an especially bad time.

“This plant hopper is a nasty little fellow,” said Kevin Cook, spokesman for the City of Lakeland.

Read the full article
[For many, the name Adam "Rattlesnake" Davis conjures up one of the most horrific crimes in the Bay Area.]

For many, the name Adam "Rattlesnake" Davis conjures up one of the most horrific crimes in the Bay Area.

The notorious killer, his then-girlfriend, Valessa Robinson, and their friend John Whispel plotted to murder Valessa's mother, Vicki Robinson because she disapproved of Davis dating her daughter.

The gruesome details of the crime spilled out during the trial. First, they injected her with a syringe full of bleach, but Vicki did not die, so Davis slit her throat. The trio then stuffed her body in a trashcan.

A Dunedin man has been arrested for the abuse and neglect of an elderly, disabled person - and the Pinellas County Sheriff's Office says it's his second arrest for alleged abuse of the same victim.

Deputies who were following up on a welfare check of the victim described a home filled with trash and feces, as well as emaciated dogs, puppies living in bins filled with their own feces, birds flying freely, rats, bugs, and overall unsanitary conditions.

The victim, a 67-year-old bedridden woman, and multiple animals were removed from the home.

Trailer of supplies stolen from nonprofit that helps kids with cancer

[Antoinette Love, 18, has been offered a total of $3,775,230 in scholarship money and applied to a total of 115 schools nationwide. (Photo credit: International High School of New Orleans)] 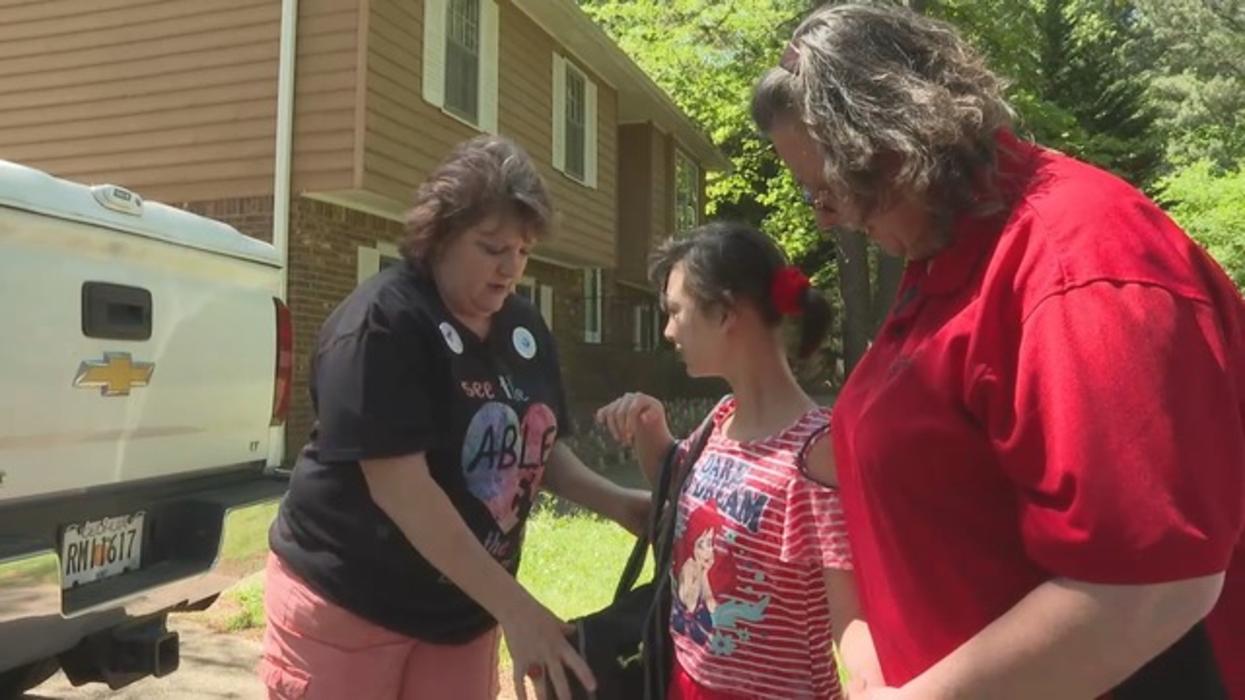 HENRICO COUNTY, Va. – A mother is speaking out after she says someone stole a trailer from the Henrico headquarters of a non-profit honoring her deceased daughter.

She says she wants the thief or thieves to know they are in possession of something special.

“It’s just inspiring to people. It’s so much more than a box with wheels on it,” said Grace Gallagher. “It’s got a heart on it and it’s passionate and it carries a bit of Cameron my daughter in it and it kind of felt like, where did you take her?”

Gallagher's daughter Cameron died in 2014 after suffering a heart attack at the end of a half marathon. But, before the 16-year-old's death, she had battled depression. The mother started the Cameron K Gallagher Foundation in honor of her daughter and to help others like her.

Gallagher says the trailer was stolen Monday night on July 23.

“We quickly realized it was stolen and our hearts sinked a bit when we realized that,” said Gallagher. “It’s just disappointing. Really, really disappointing.

Gallagher says that’s because the trailer carries a message of hope.

On the side of the trailer, reads the words "Awareness, Education and Help for those battling teenage depression.”

Gallagher says the contents inside the trailer are worth roughly $7500.

“It’s just more than the dollar. It really is all about the message. It sounds silly to be optimistic, but I just think something good has to come out of it,” said Gallagher. 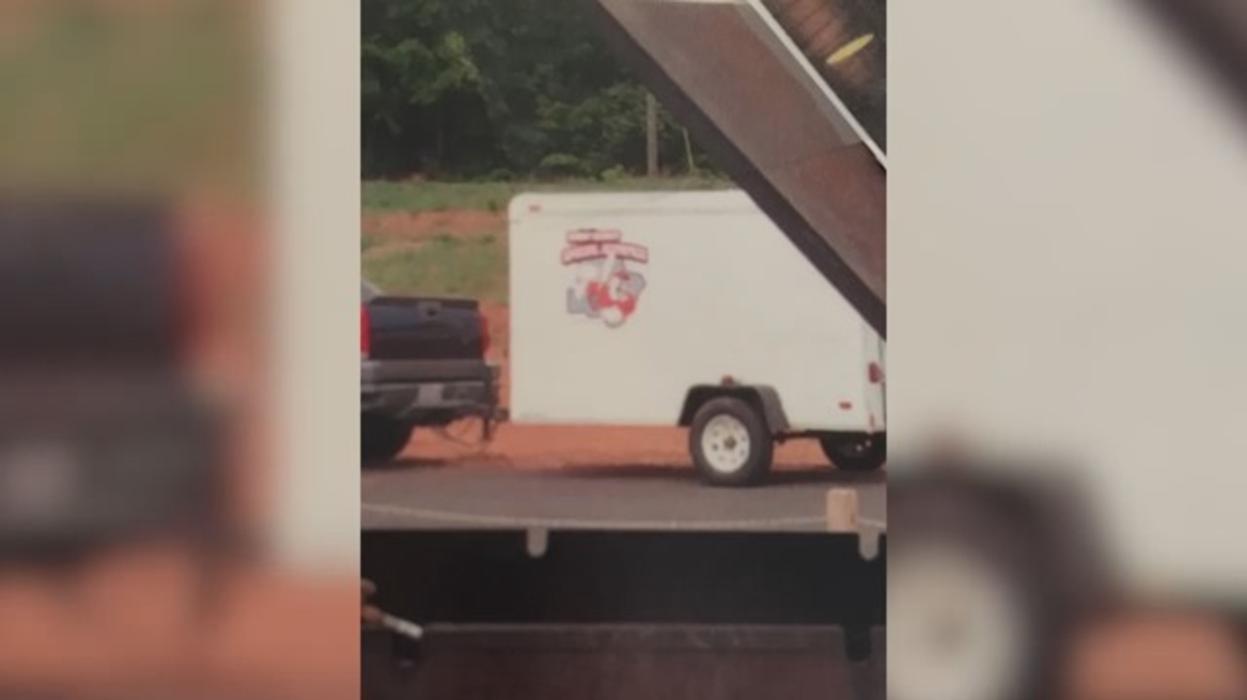 Lasan Scouts has impacted a number of young people's lives. For more than six years, it has grown from a handful of kids to nearly 50.By Nick Natario
Thursday, April 25th, 2019 9:52PM
A group of Boy Scouts in Cypress is left scrambling after its trailer was stolen.

Hurricane Harvey forced the group to use the trailer after the storm flooded their building. Now, they're devastated once again after the trailer went missing.

Lasan Scouts has impacted a number of young people's lives. For more than six years, it has grown from a handful of kids to nearly 50.

One of those is William Nguyen, who recently became an Eagle scout.

"This troop has given me a place to go to whenever I have hard times," Nguyen told ABC13 Eywitness News.

Now, he's looking for an escape after the hard times hit Nguyen's troop. A block and lock are all that remain of a trailer that once housed the group's supplies.

"We used to sneak in there to eat gummy bears," Nguyen said. "Now, it's gone."

Until Monday, the trailer sat at the troop's meeting location near Interstate 290 and Telge Road. Parents noticed it was missing on Tuesday.

They reported it to Harris County deputies. Between the trailer and goods, the group says it lost nearly $20,000 in equipment.

The scouts were planning to use the equipment this weekend for a camping trip. Now, parents are racing to buy ovens, tents, and safety gear.

Although it's gone, it doesn't appear to have damaged the spirits of this group too much.

"We can always start over," Nguyen said. "We're scouts. We can make something out of it."

If you're interested in helping, donations can be sent to:
La San Foundation Memo: Scout 1212, 14562 Cypress-North Houston Road, Cypress, Texas 77429 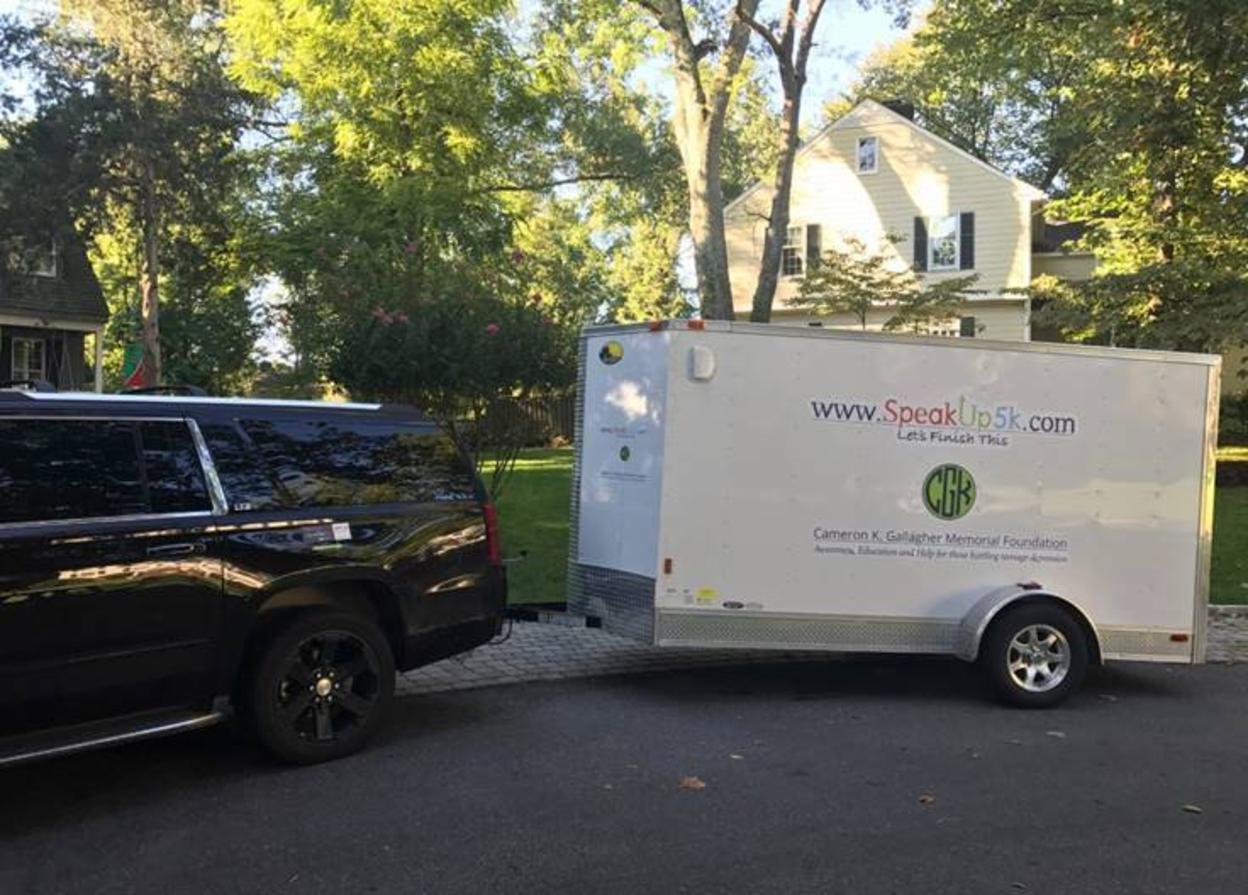 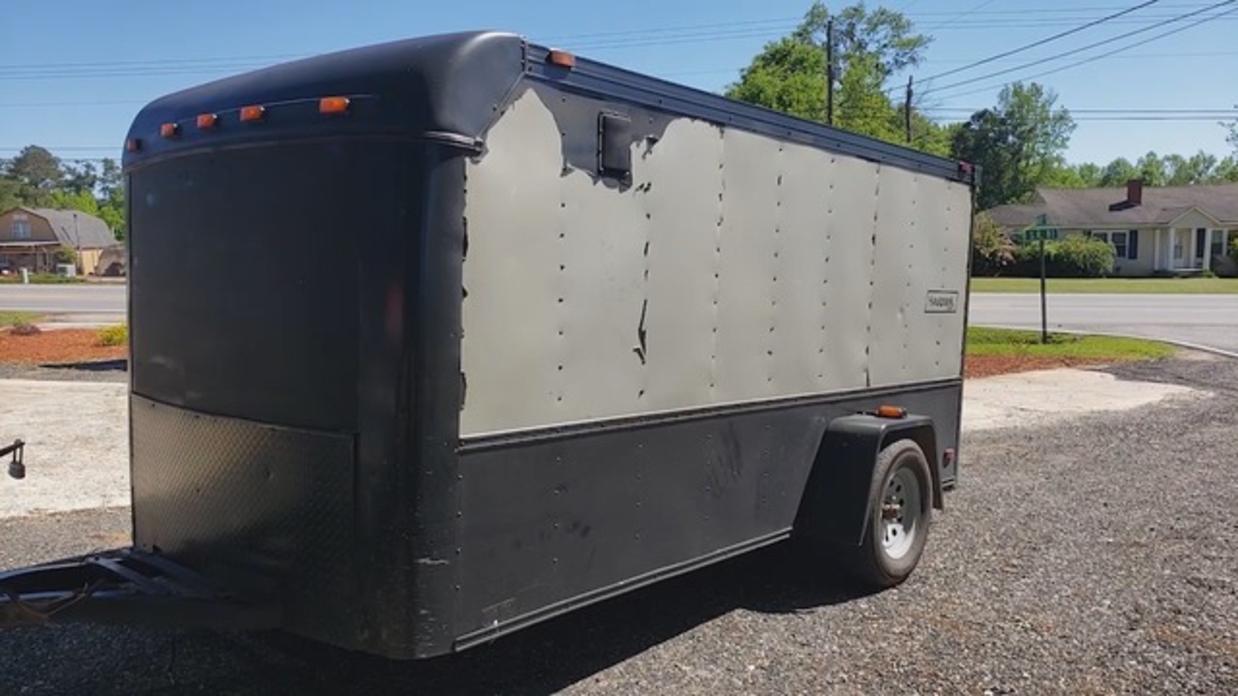 Do You See A Pattern? 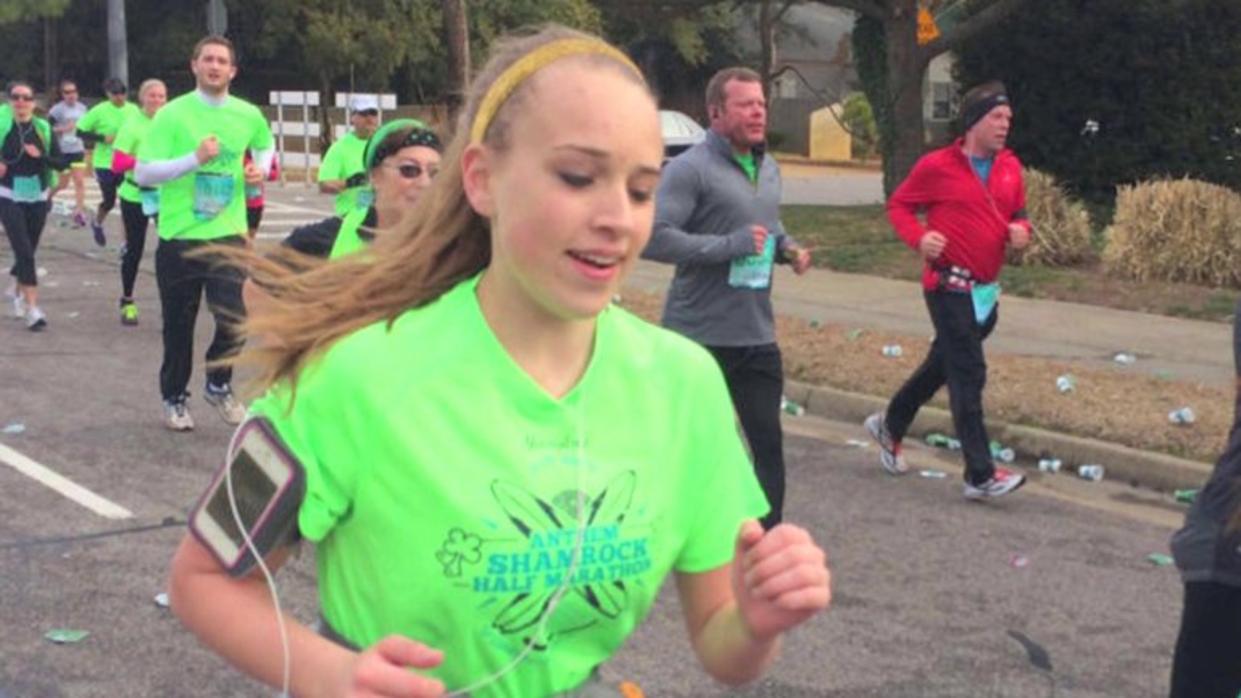 HENRY COUNTY, Ga. (FOX 5 Atlanta) - Some of the most heartwarming work in Henry County stems from its Special Olympics organization, so it really makes people's blood boil when that group is hit by crime.

Two of the volunteers, Terry and Rita Brooks, told FOX 5 News their trailer, used to bring hot food to Special Olympics events in the area, was stolen Thursday afternoon.

Their daughter told Henry County Police a white male with brown hair and tattoos knocked on her family's front door Thursday afternoon. She did not answer it because she didn't recognize him. A few minutes later, according to the police report, she watched the man drive a white SUV away with the trailer attached.

Between the trailer itself and the items inside from a church garage sale, the Brooks family is looking at about $3,500 in losses.

Rita Brooks emotionally told FOX 5 News that the victims of this theft go beyond her family. When asked, "Who are the victims," Brooks tearfully replied, "The hundreds of special needs [kids and adults] in Henry County."

Brenda Chamlee, whose daughter is a Special Olympics athlete, shared some strong words for the culprit.

"Just count your blessings, be kind to people and quit taking what's not yours," Chamlee said.

The family is urging people to keep their eyes peeled for the white trailer marked with Henry County Special Olympics and Bull Dogs decals.

This comes on the heels of another trailer reportedly stolen in Henry County. Thomas Boswell of Advanced Services said his trailer, which is frequently used for charity work, disappeared on Easter weekend.

"It very well could be connected, we just don't have that information right now," Sgt. John Davis said.

Investigators are asking people with any information on the whereabouts of the trailer or suspect to contact the Henry County Police Department.