In The United States We Gave Congressman Cantor 8 Years To Do Something But Over 6,000 Were Killed Under His Watch...

So We Helped Vote Him Out.

Then We Sat Next To Dave Brat The Day We Voted Out Congressman Cantor And He Looked Me In The Eye And Promised To Do Something.....Under His Watch Over 2,000 More Were Killed Under His Watch...

So We Helped Vote Him Out

Now Under Congresswomen Abbygail Spamburger So Far Over 100 Have Been Killed ...And See The First One Of 2019

"People need to know that going out without the correct safety checks, you're taking a big risk."

Ms Hussey, who has campaigned with her husband for better safety since her son's death, said "if our hard work saves one life, then it is worth it".

In 2016 the DVSA released new guidelines for towing safety after the family raised the issue.

As part of the meeting, The National Towing Working Group, chaired by Highways England, will launch a new safety framework, aimed at reducing towing-related incidents on the UK's roads.

The group will discuss subjects including the gathering of data on trailer related incidents, and raising safety awareness among trailer users.

Freddie was killed when he was hit by a trailer that had come loose from a Land Rover as he walked along a pavement in Bedminster, Bristol, in January 2014. 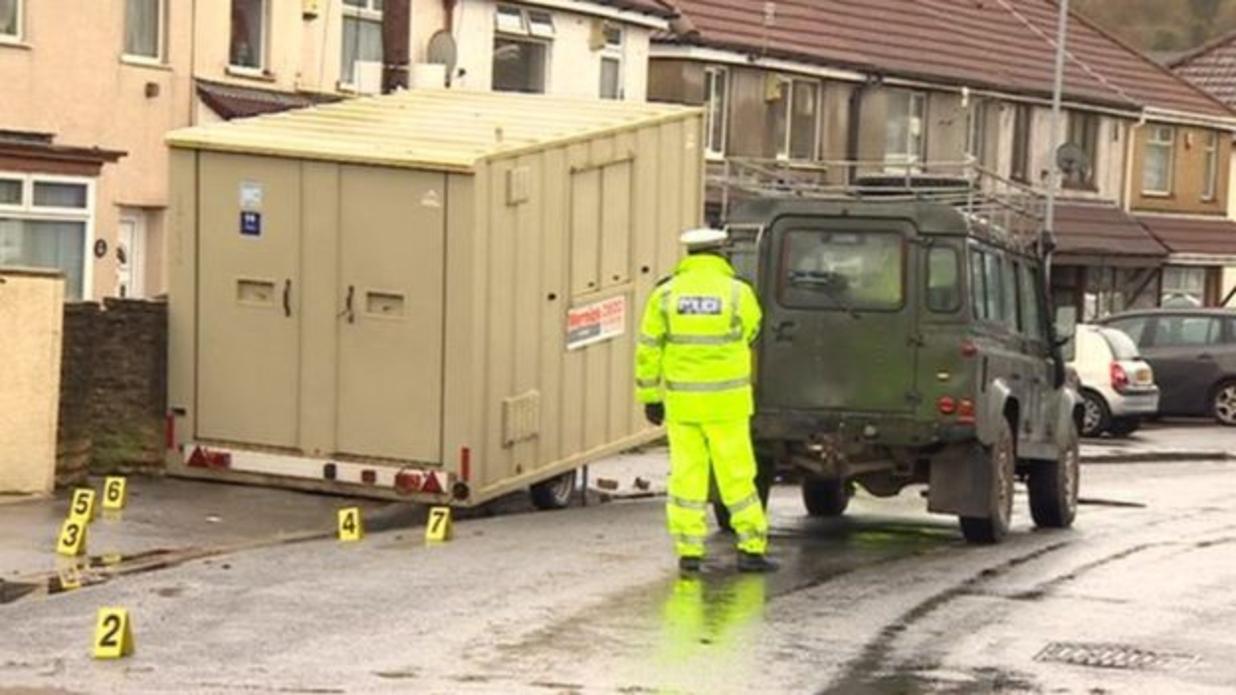 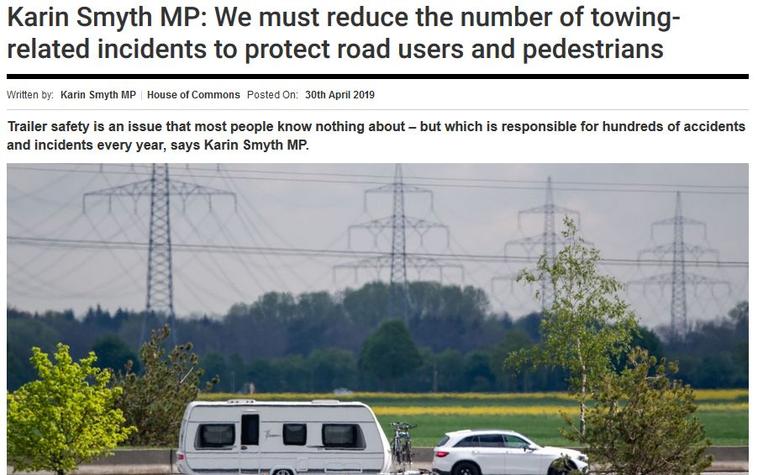 Karin Smyth MP: We must reduce the number of towing-related incidents to protect road users and pedestrians

Trailer safety is an issue that most people know nothing about – but which is responsible for hundreds of accidents and incidents every year, says Karin Smyth MP.

Today’s launch of the All-Party Parliamentary Group (APPG) on Trailer and Towing Safety in Parliament is such an important milestone in reducing the number of towing-related incidents across the UK, says Karin Smyth MP.
Credit:
PA Images

I first met with Donna and Scott Hussey in 2016, less than a year after becoming the Member of Parliament for Bristol South. Two years previously, they had lost their three year old son Freddie in the most tragic of circumstances, when a trailer came loose from a vehicle in Bedminster. Speaking to Donna and Scott that day, it was clear to me that Freddie’s loss had affected them in ways I can only try to imagine. Still through the grief, anger and sadness, I was struck by something else – a quiet, dignified yet unflinching determination to do something that would stop this happening to another family.In the years since then, I have been privileged to campaign alongside Donna, Scott and a growing number of supporters and stakeholders. Together, we’ve shone light on the many problems around trailer safety, an issue that most people know nothing about – but which is responsible for hundreds of accidents and incidents every year.

That’s why today’s launch of the  All-Party Parliamentary Group (APPG) on Trailer and Towing Safety in Parliament is such an important milestone. The creation of this cross-party group is another huge step forward in our campaign to improve trailer safety, and it is fitting that The National Towing Working Group, chaired by Highways England, will be launching their first ever Safety Framework at this inaugural meeting. The aim of this framework is simple – to reduce towing-related incidents across the UK.

And while today is about what we need to do going forward, it also provides a fitting point to mark the other milestones we have met along the way. As well as two high-profile Trailer Safety Summits in Bristol, we also secured an amendment to the Haulage Permits and Trailer Registration Act requiring the government to collect data on trailer related incidents. All the while, we have had positive and constructive talks Road Safety Minister Jesse Norman MP over further potential changes to legislation.

The DVSA have themselves introduced new guidelines for towing safety, launching the #TowSafe4Freddie campaign to help raise awareness among drivers – and honour Freddie’s name. We have also broken new ground by working with the National Trailer and Towing Association (NTTA) to promote free roadside safety checks for trailers, taking trailer safety out onto the roads themselves.

But there is so much more to be done to protect road users and pedestrians alike - which is why I have launched the new APPG, ahead of the publication this summer of the Department for Transport’s Trailer Safety Report, commissioned after my intervention in 2018.

And while the work of politicians, organisations and Government Departments goes on, I am guided always by the words of Freddie’s mum, Donna, who sums up the reason for our campaign better than I ever could.

“While it has always been difficult for us to comprehend what happened to Freddie, we made a promise to each other and to Freddie that we would do all we could to make sure this issue is given the serious consideration it deserves. If our hard work saves one life, then it is worth it. No family should go through what we have been through. We are determined to see this through in memory of Freddie.” 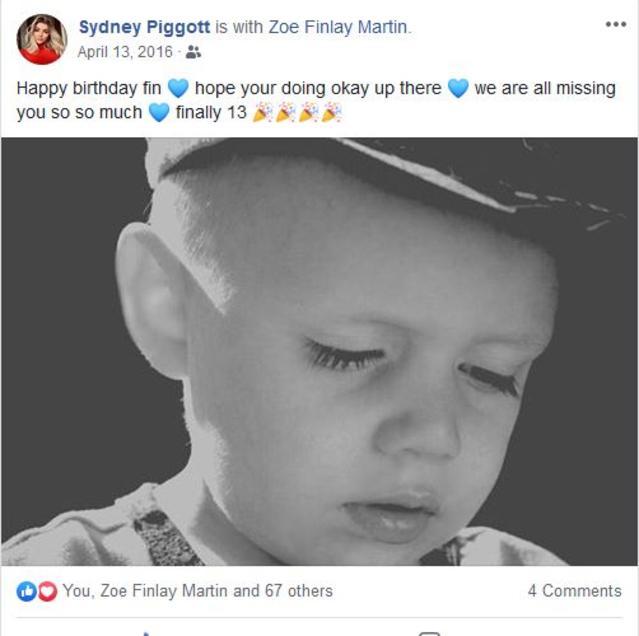 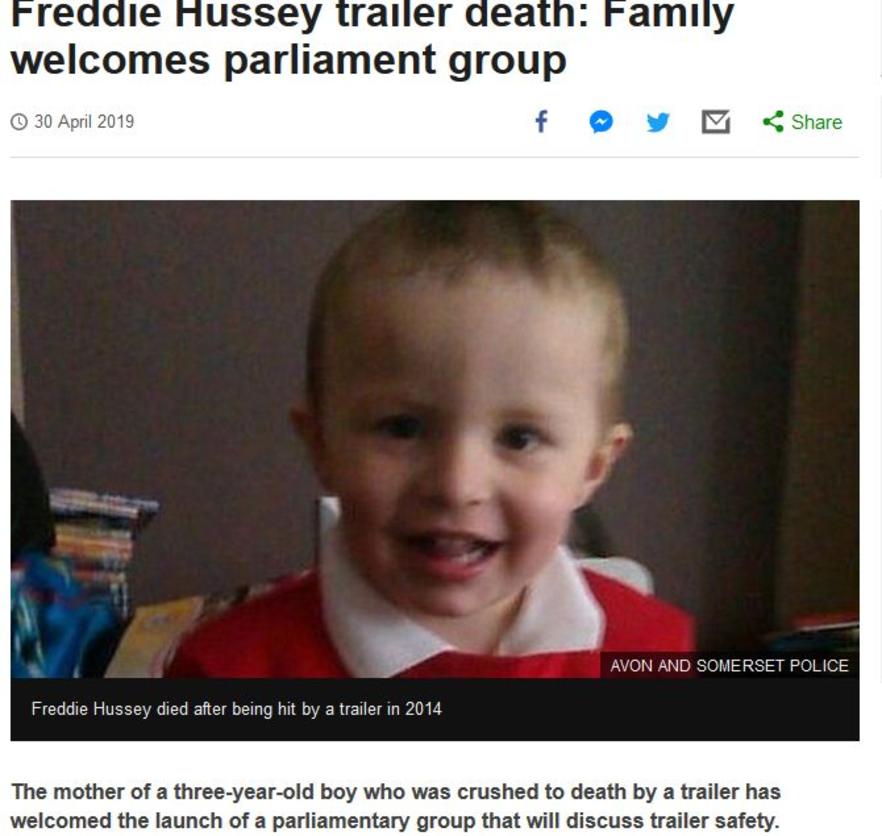 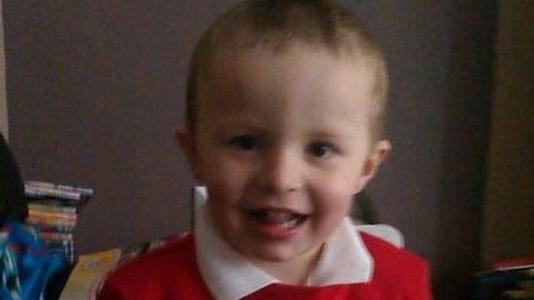 The mother of a three-year-old boy who was crushed to death by a trailer has welcomed the launch of a parliamentary group that will discuss trailer safety.

Freddie Hussey from Bristol was killed in 2014 when a trailer towed by a Land Rover came loose and hit him.

A new cross-party group, aimed at raising safety issues, will meet for the first time later.

"If that trailer had been serviced they would have known that the hitch was not secured correctly," she said.

"Had the driver realised there was a problem, he might not have gone out that day.