These City's and Towns keeps ignoring our safety recomendations and keep conducting these parades with no safety best practice that we at www.paradesafety.org keeps trying to promote why don't they listen? 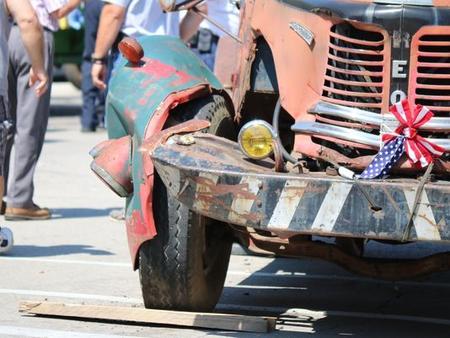 One man injured July 4 said he has hired an attorney

Dick said he bought the antique tow truck about six months ago, and checked it out by driving it around the block a few times.

When Dick entered the holiday parade route in downtown Fremont, he was behind two antique John Deere tractors, including one that was pulling nine passengers in a wagon.

Clyde Booze, 80, of Bettsville, a passenger in the tractor-pulled wagon, went airborne after Dick lost control of the tow truck and struck the cart after hitting parade participant Duane Huffman.

"I don't remember much because I was airborne after he hit us," Booze said. "I have four broken ribs on my right side, and one broken rib on my left side."

Booze said he landed hard on his back on the Croghan Street asphalt, severely bruising his back and "crushing my lung."

The 80-year-old said he has hired an attorney and plans to recoup the medical costs from Dick for his injuries, including the bruised lung that he told police could be life-threatening if it does not heal properly.

Dick said he attempted to avoid hitting anyone when he realized that the brakes and air horn did not work.

Traveling downhill on Croghan Street, Dick was unable to stop or use his horn and began yelling out the window that his brakes were not working. He turned off the truck's engine and left the vehicle in gear to slow it down, according to a police report.

"I was trying to avoid everyone," Dick said.

The tow truck struck Duane Huffman, 39, in the hip as he was walking in the parade and pushing his 18-month-old daughter Cadance Huffman in a stroller alongside the wagon carrying Booze and other members of the First Brethren Church of Fremont, according to the police report.

Cory Hull, a spectator, said the rear wheels of the tow truck came within four inches of running over Cadance Huffman's head after she fell into the street.

Fremont Police Sgt. Clayton Holskey told The News-Messenger that Dick was cited because the vehicle was leaking air that controlled the brakes and the horn. Although the tow truck was equipped with an emergency brake lever, that brake was not functioning, according to Holskey.

"With vehicles like this, they use compressed air for brakes and the horn. As he was driving to the event, he was gaining enough speed to have air compression for the brakes," Holskey said. "Once he was in the parade sitting idle or only going about 3 mph, there wasn't enough air pressure for the brakes or horn to work and the truck was not able to maintain adequate air pressure."

Investigators were unable to determine how fast Dick was traveling at the time of the crash, Holskey said.

For Fremont resident Mike Dukeshire, reading Dick's name in The News-Messenger article Monday brought back vivid memories of a horrific crash from 18 years ago.

On July 11, 1999, Dukeshire was driving home from Cleveland with his wife Melissa and two children, Michael and Katie, when his vehicle was involved in a tragic three-vehicle crash caused by Dick.

Dick crashed into Dukeshire's vehicle, forcing it into the roadway where an oncoming vehicle struck the driver's side door where his wife was seated.

The crash put Dukeshire in a coma for several days and took the life of his wife.

Dukeshire said he was told that nearly a dozen people were transported to hospitals by Life Flight helicopter that night, including his son and daughter.

Dick pleaded no contest and was found guilty of vehicular homicide. He was placed on probation for 12 months and did not have to serve jail time as long as he did not have any speeding or reckless driving offenses, according to Sandusky County Common Pleas Court records.

Dukeshire and other families filed civil lawsuits against Dick, and Dukeshire was awarded $50,000.

He said Dick should have better checked the tow truck he was driving in the July 4 parade.

"He just seems so reckless, or like he thinks he's above getting into an accident," he said. "That parade has been going on for years and years and everyone always checks their equipment."

Dick said this week that the 1999 crash is irrelevant to the parade crash and declined to comment further.

Prior driving records show Dick had his driver's license suspended for 30 days in 2001 after being cited for failure to maintain an assured clear distance. He also was cited four times for driving without a seat belt and in 1998 was cited for driving 65 mph in a 55 mph zone.

Frost said there is no procedure for inspecting vehicles entering parades in the city, saying the recreation department will look at parade vehicles as they line up.

"We are not going to get rid of the antique vehicles," Frost said. "Antiques are a big part of the city's past. It was very unfortunate."