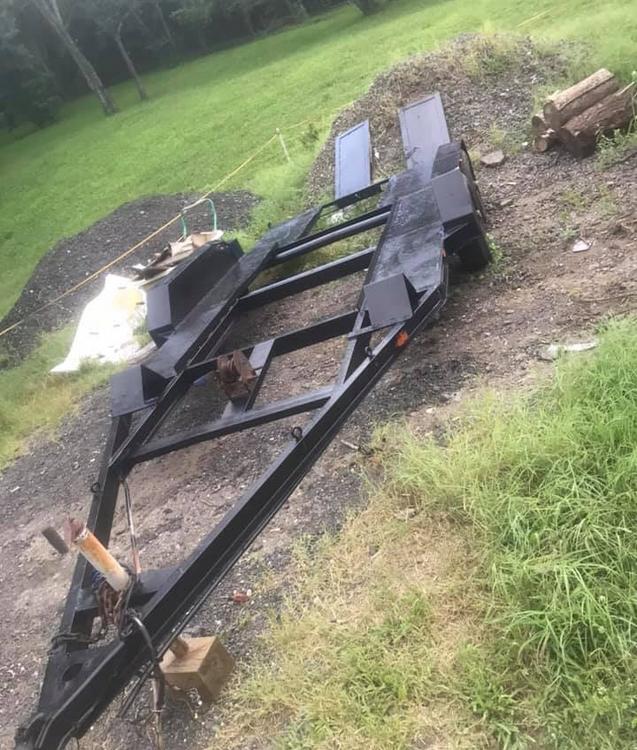 
Yes Everybody The State Of Missouri Is the Stupidest State In The Nation to Let
76,801 Trailers Be Registered In Maine. (Maybe They Were Educated By Common Core)


Connecticut officials have complained in recent weeks about the number of personal vehicles Connecticut residents have registered in Maine to avoid paying the property taxes they owe their cities and towns.

But it turns out, many more Maine-registered trailers than cars are from away — and Missouri is the most common out-of-state home.

Maine runs a brisk trailer-registration business that thrives from the same rules that make Maine an appealing auto registration destination. Namely, it’s cheaper and easier to register a trailer — from the boat trailer you two behind your car to fleets of commercial truck trailers — in Maine than in many other states. And there’s no requirement that the person or entity registering the trailer be based in Maine.

There are 1.15 million trailers registered in Maine, and more than 354,000 — almost 31 percent — are registered to people and entities outside of Maine.

In 2013, Maine’s trailer practices attracted the ire of motor vehicle officials in Delaware, who said vehicles hauling Maine-registered trailers were responsible for a fifth of that state’s unpaid tolls in 2012 — $300,000 out of $1.5 million.

The most common out-of-state home for trailers registered here in Maine? Missouri, with 76,801 Maine-registered rigs.

Check out the graphic above to find out which other states are responsible for Maine’s trailers from away. And here’s a top 10 list, compiled from data provided by the Maine Bureau of Motor Vehicles. 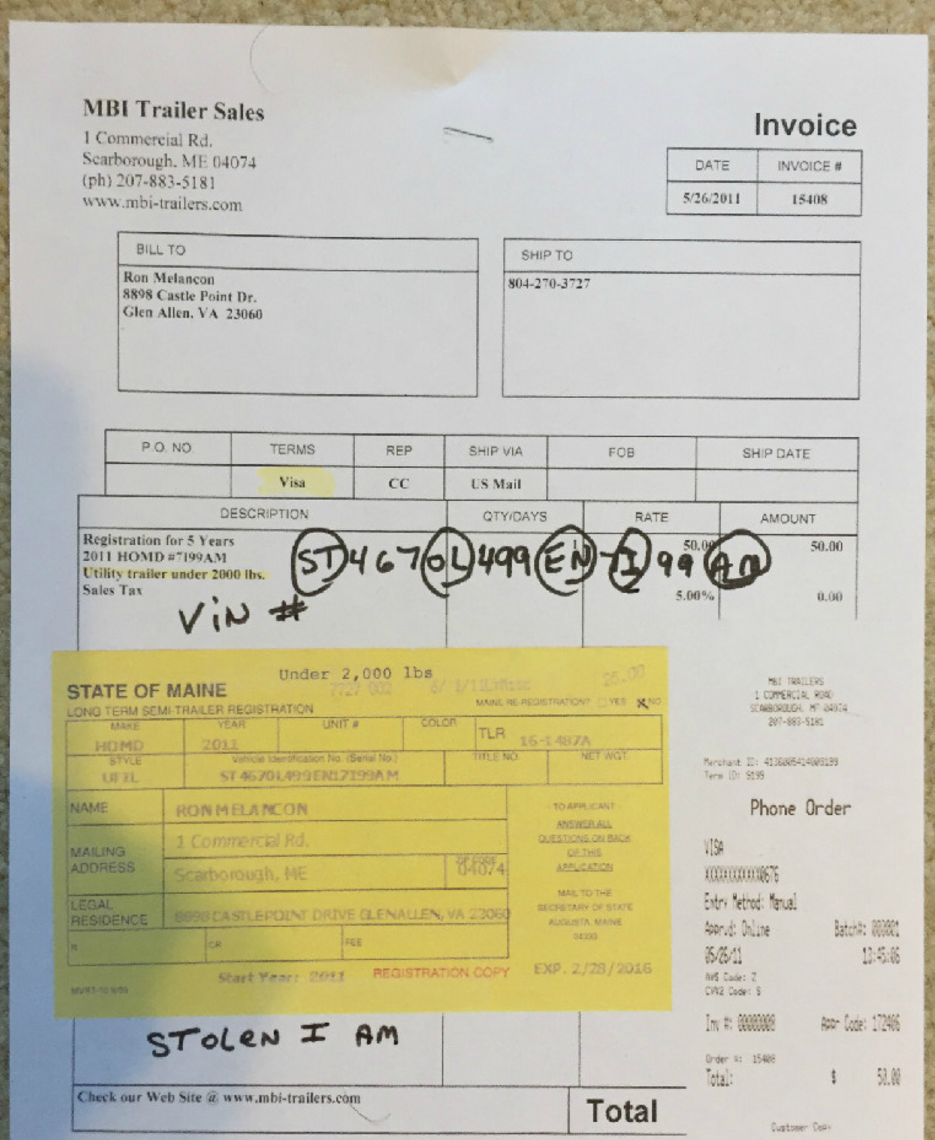 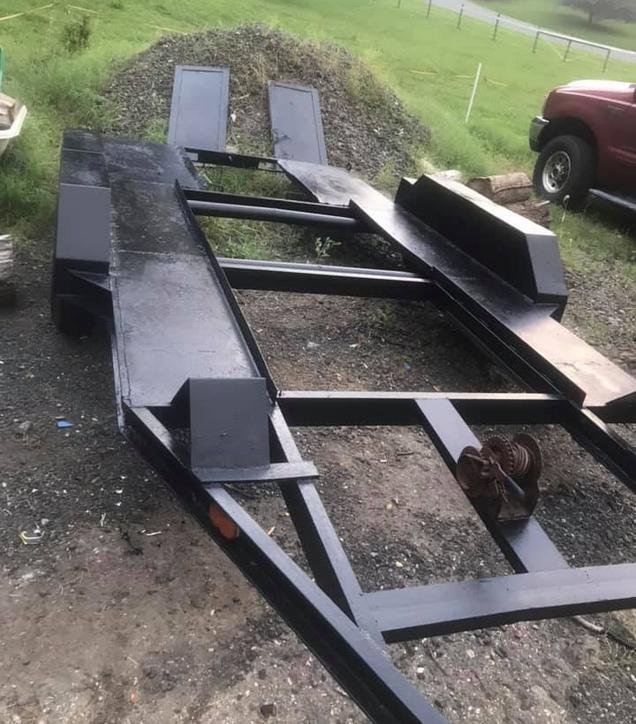 This person is selling a commercially built trailer with so many safety violations and then he is telling the new buyer he will get new vin numbers by getting them from Maine the biggest helper of re-registrations of stolen property in the United States.

The owners posting on a selling web site:

Homemade car/drag trailer made for smaller car with tubs, measures about 6ft 8in wide and set up for 14ft to bump stops could go another 2ft if wanted , 4brand new tires wheel bearings and taillights does have 4 wheel brakes I don’t have them hooked up never needed them , No title you can get a homemade one if you want I run Maine tags, no I will not go get one for you ! Price is OBO make a reasonable offer

Commentary from one of our supporters:

Axles have brakes but not hooked up, trailer doesn't have break away brakes. Homemade no registration. Completely illegal

A 2020 trailer valued at $10,000 was stolen from a business in Bedford Township Monday morning, according to the Monroe County Sheriff’s Office.

The trailer was removed from the Greystone Services LLC at 6339 S. Telegraph Rd. sometime around 5:30 a.m. Monday, a deputy’s report said. The trailer had a tilted deck, an Ohio license plate and company stickers on the side.

Surveillance cameras at the business showed two unknown males enter the property near a gravel parking lot and use an unknown vehicle to hook up to the trailer.


It was on a poorly lighted roadway in the dark of night that Ron Melancon bumped into the cause that's occupied him for eight years.

The Richmond, Va., resident was at the wheel of the family car when he plowed into the back of a homemade trailer. It had no taillights or reflectors, and it was painted black, which made it virtually impossible to see.

He was surprised a second time when he learned that such a towing arrangement was perfectly legal in his state. There were no regulations on trailers weighing less than 3,000 pounds in Virginia.

That's when Melancon, a former emergency medical technician, decided to learn more about how utility trailers are regulated in the U.S. He discovered that 10 states don't require registration, and nine don't require safety chains -- a fail-safe measure that keeps trailers secured if a tow hitch fails.

The more he learned, the more perplexed he became.

He regularly scours the Web for news accounts of trailer accidents. His findings appear across the top of his website, DangerousTrailers.org: "Since 1975, 15,592

lives lost." The pull-down tabs at the top of the home page lead to an archive of tragedies: "Homemade trailer slams into truck"; "Loose trailer takes life of 19-year-old"; "One dead in car collision with trailer."

Inadequate hitches, hitches that are improperly attached and the absence of safety chains often are cited in the worst accidents. Homemade trailers, which can be licensed in some states without inspection, are involved alarmingly often. (In California, a DMV safety verification is required.)

Perhaps the most outrageous incident occurred in 2010 near Grand Rapids, Mich., where a 46-year-old grandmother was killed when a utility trailer broke loose from a van, crossed into oncoming traffic and crashed into her SUV. The trailer had been secured by a makeshift hitch made of duct tape and metal screws.

Melancon's safety campaign has earned mentions in newspapers across the country, from USA Today to the Washington Post to the Los Angeles Times. He's fought a one-man battle, almost bereft of funding, but he's made his mark.

Largely because of his lobbying, Virginia now requires reflective tape on all trailer backs. (California requires one taillight on even the smallest trailers.) He persuaded Lowe's stores to attach reflectors to the trailers they sell. Arizona officials contacted him recently to consult on trailer safety. That, however, is only a part of his concern. He says the registration process needs to be tightened. Vehicle identification numbers, which are glued rather engraved onto trailer frames, are so easily replaced that theft and fraud are commonplace.

One popular scam is to buy a manufactured trailer, insure it, then remove the VIN and report it as stolen. Re-branding it as a homemade trailer with a new license plate can be as simple as filing bogus paperwork with another state.

Melancon did this recently to prove his point. He applied from Virginia for a Maine trailer license with a fabricated VIN (ST467OL499EN17I99AM). For a $50 fee, he received his license plate in the mail with official documentation. Apparently no one noticed the message hidden in the VIN if you remove the numbers: STOLEN I AM. 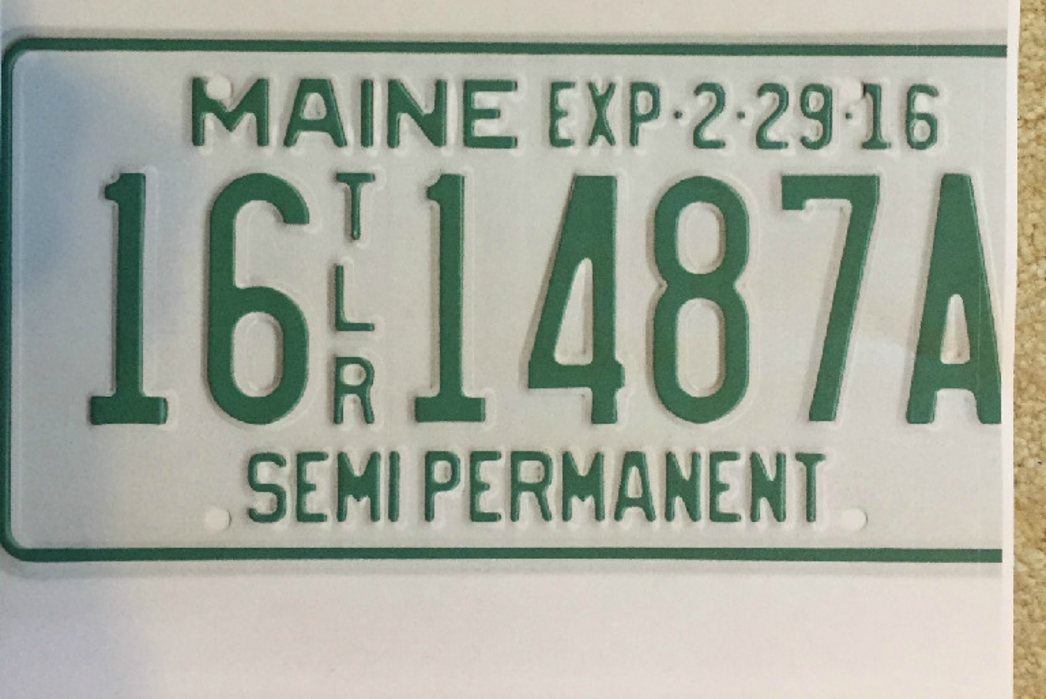 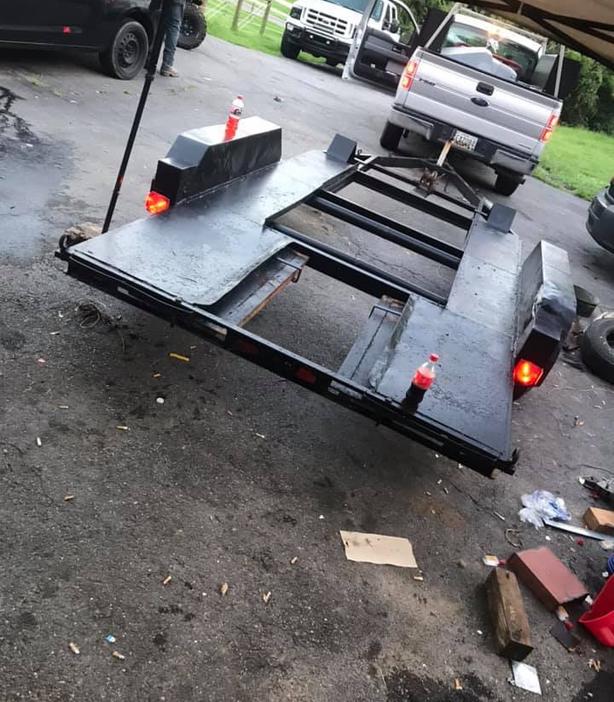 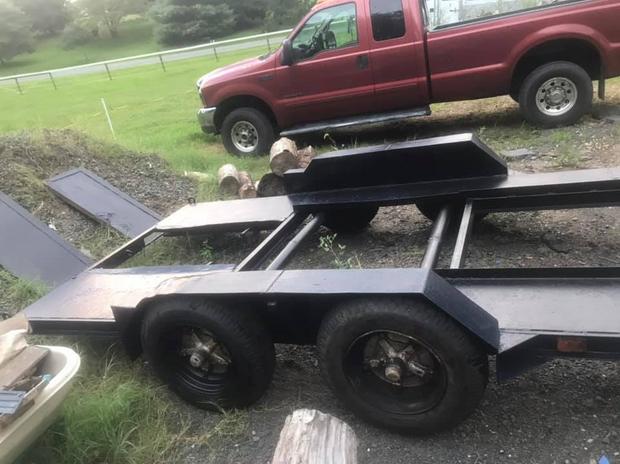 14 States Have No Registrations For These Small Trailers!  The Other 36 States
Allow Anybody To Purchase A Stolen Trailer And Obtain A New Tag And Vin Number!
Click Here

Now right to the point about Maine!

Maine Is The Largest Helper To Help Citizens Register Stolen Trailers And Avoid Personnel Property Taxes In The States Cheap People Live In... Yet These Cheap People Demand Funding For Local Schools And Local Fire And Police.   If You do Do This How Can You Expect  Others To Pay For Your Child's Education, Fire, Police And Local Government.

Right To The Point:

One popular scam is to buy a manufactured trailer, insure it, then remove the VIN and report it as stolen. Re-branding it as a homemade trailer with a new license plate can be as simple as filing bogus paperwork with another state.

Melancon did this recently to prove his point. He applied from Virginia for a Maine trailer license with a fabricated VIN (ST467OL499EN17I99AM). For a $50 fee, he received his license plate in the mail with official documentation. Apparently no one noticed the message hidden in the VIN if you remove the numbers: STOLEN I AM.