Her Story: Has a war chest of 15 Million less Lawyers Fees

Robin Abel, right, talks to daughter Maria Federici in this 2006 photograph. Federici was blinded and disfigured when a piece of particle board flew off a truck and crashed though the windshield. (Greg Gilbert/The Seattle Times)

More than a decade after Robin Abel’s daughter was blinded by a piece of particle board that flew from the back of a rented moving trailer, Abel saw the president sign a transportation bill on Friday that addresses the risks of unsecured loads.

It’s been more than a decade since Robin Abel’s only child, Maria Federici, was blinded and nearly killed by a piece of particle board that flew out of a rented moving trailer, struck the 24-year-old’s windshield and sheared off her face.

Since then, Abel has worked almost nonstop to educate lawmakers, businesses and individuals about the dangers of driving with unsecured loads.

On Friday, Abel allowed herself to enjoy a celebratory moment as President Obama signed a five-year National Transportation bill that included what Abel calls “my paragraph.”

It seems like such a simple, and perhaps even obvious, acknowledgment of the dangers posed by unsecured loads and highway debris, but it has been a long, arduous and sometimes lonely and frustrating campaign for Abel.

“As sad as it is what happened to my family, I know that I have made a difference and that’s what keeps me going,” said the 61-year-old former banker turned activist. “I know that my work has saved lives and will save lives, and I know that I am the right person for this mission because nobody cared about this more than me.”

Abel was asleep at her home on Lake Kathleen in Renton on Feb. 22, 2004, when she got a call from Harborview Medical Center.

Her daughter, then 24 and a graduate of the University of Washington, had been injured in an accident and was not expected to survive.

Federici had been driving home on Interstate 405 when a piece of wood flew out of the back of a rented U-Haul trailer and through Federici’s windshield.

The driver of the car pulling the trailer — who was tracked down by police through a fingerprint on the board — had been moving all day, was tired and had failed to properly secure the items in the trailer, police told Abel later.

At the time, there was no law addressing the consequences of poorly secured loads and the driver was cited for a traffic infraction and fined.

“Norm told me to tell my story, to keep it personal and that people would care,” she said. “And he was right. I know that after people hear me talk, they will never look at the road the same way again.”

In 2005, Washington legislators adopted what has been called “Maria’s Law,” which criminalizes a person’s failure to properly secure a load that results in injury or death.

But that was not enough for Abel. She went on to educate businesses, county officials, drivers, anyone who would listen.

In March, Abel was presented with the Department of Transportation’s National Highway Traffic Safety Administration Public Service Award for her effort to bring “awareness to unsecured loads and roadway debris risks to motor vehicles on a local, state, and national level.”

Federici, who won more than $15 million in a lawsuit against U-Haul, has gone on to live her own life. She bought a house and got married.

According to Abel, she is happy but does not share her mother’s mission.

“She doesn’t want to do this, and that’s OK,” Abel said. “But I cannot help what I do either. I don’t feel I can rest until everyone knows the dangers and how to secure their load,” she said.

Her next step is to work with states to show them what has worked in this state.

On Friday, just before she headed off to an appointment, she couldn’t resist sending one more email.

“One thing I want the public to know is that ALL items need to be ‘securely fastened’ and often drivers don’t understand that. They think if the load is heavy or light or crammed in, it is good to go. That is not the case. There should be nothing loose in the back of your truck, it must all be securely fastened.”Christine Clarridge can be reached at cclarridge@seattletimes.com or 206-464-8983.

A loose Runaway Trailer is unsecured load is it not?  Then why didn't the Obama Administration include our cause in this new National Law?  Because We Did Not have a war chest of 15 Million dollars. 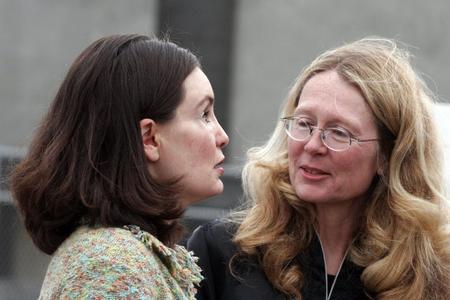 Our Story: Has only a debt of  $115,000 every victim who has attempted to sue has either been paid more to Non-Disclose or the owner of trailer has limited insurance policy's in which lawyers will not take on a case if the payout is only going to be the max of the policy.  That is what lawyers  keep telling us.