In June 2002, facing numerous complaints about a tire that had been installed on thousands of motorhomes, Goodyear Tire & Rubber Co. put out a service bulletin with one RV manufacturer to replace the tires for certain owners, free of charge. By then, Goodyear had received at least 20 injury and death claims over failures of the tire, the G159, as well as 310 property damage claims. Armed with knowledge of the high failure claim data, federal regulators are asking the company why it didn’t simply conduct a safety recall instead for the tires, which would’ve let owners of all G159-equipped RVs know about a potential safety issue.

More and more, lawyers, regulators and customers are asking this: if Goodyear was aware of so many reported problems with this tire, why not recall it?

It’s a question that has factored into the 41 lawsuits Goodyear has faced over the last 20 years due to accidents involving failures of the G159 275/70R 22.5, characterized by one attorney pursuing a case against the company as “the worst tire made in history.” The lawsuits allege the G159 was prone to heat-induced failure and, based on Goodyear’s own internal data and experts, that it wasn’t suitable for RVs.

Goodyear has never issued a recall for the tire. By securing secret settlements with numerous plaintiffs, which precluded them from submitting information about their cases to federal regulators, the U.S. Highway Traffic Safety Administration never launched an investigation into the G159, until earlier this year.

Now aware of the failure data associated with the G159, NHTSA asked Goodyear in an April 3 letter for an explanation “of why the action taken” in the 2002 Monaco service bulletin “was not pursued as a safety recall.”It’s almost certain a recall would’ve had an impact. After the bulletin wentout, Goodyear received an additional 57 injury/death claims, 240 property damage claims, and 3,484 adjustments over the G159. In total, court records show Goodyear has received at least 98 injury and death claims—Jalopnik’s ongoing investigation has confirmed at least nine deaths associated with G159-related crashes—as well as hundreds of property damage claims from G159 failures.

About 40,000 G159s were installed on motorhomes between 1996-2003, according to court records. The tire has a failure rate that exceeds the defective Firestone tires that developed into a nationwide scandal in the early 2000s.

In a letter sent to NHTSA by attorney David Kurtz, who has litigated G159 cases for more than a decade, Goodyear’s global director of compliance and product performance, Lynn Lovell, is quoted as saying that Goodyear’s position is “100 claims of death or injury did not indicate a quality issue with the G159.”
“Ms. Lovell acknowledged that Goodyear never disclosed to NHTSA the more than 600 property damage claims relating to the G159, never volunteered the property damage information to NHTSA, did not disclose adjustments to NHTSA, but asserts that if NHTSA had any inquiries,

But in 2006, in response to a request from NHTSA, Goodyear disclosed only seven injuries from G159 failures, despite having received 74 death and injury claims by then, Jalopnik previously reported. In its response, Goodyear only represented having received 58 failure reports, even though it was aware of 458 crown separations.

(Jalopnik obtained the letter after it was temporarily unsealed by a Maricopa County Superior Court Clerk. Goodyear asked a judge to call Jalopnik to stop the publication of the letter, but the judge refused.)

In a statement, Goodyear spokesperson Jim Davis said the company disagrees with “many of the statements” in Kurtz’s letter, and declined to respond to questions about the decision not to recall the G159, citing NHTSA’s ongoing investigation.“We continue to believe that there is no safety-related defect with the G159 size 275/70R22.5 tire,” Davis said. “We are fully cooperating with NHTSA.”

“Nothing is more important to Goodyear than the safety and quality of our products and the people who use them,” he added. “Goodyear has a robust process for identifying potential safety-related defects in its products. We continuously monitor the manufacturing process and theperformance of our products in the field. When potential issues or trends are identified, they are raised to the appropriate individuals and action is taken as necessary.”

“The numbers—the fatality rate—is frightening,” said David Friedman, the former interim head of the National Highway Traffic Safety Administration. “So far over what often triggers a recall in cars and other products.”

Friedman, now the director of cars and product policy and analysis for Consumers Union, said Goodyear’s required to recall a product that “does or may pose an unreasonable risk to consumers.”

“The only reason NHTSA gets involved is when companies resist doing the right thing,” he said, “the thing they’re required to do by law.”


‘That’s What The Law Says’

NHTSA is clear about when a manufacturer needs to report a possible defect and issue a recall. Once a determination of noncompliance has been made, the decision needs to be reported to NHTSA within 5 working days.

“Importantly, a manufacturer does not need to have identified the cause of the defect or noncompliance, or a remedy for that issue, in order to make this decision,” according to NHTSA.

“Indeed, the absence of this information is not grounds for a manufacturer to delay its reporting of the safety defect or noncompliance. If part of the information which is required to fully describe the recall is unknown, notification to the agency must still be made with that information that is known within 5 working days.”


In the past, Goodyear has notified NHTSA about issues with other tires. Take the Goodyear Wrangler Silent Armour tire.

In February 2012, Goodyear told NHTSA in a letter that it was conducting a voluntarily recall of 40,915 tires, and included six sizes of the Wrangler Silent Armour tire. Goodyear laid out the reasoning behind its decision:

More and more, lawyers, regulators and customers are asking this: if Goodyear was aware of so many reported problems with this tire, why not recall it?

Why Can Goodyear Get Away With This but......Not IKEA with their falling furniture in your own home that kills children?

But.....Goodyear has so much money they can pay off everybody. 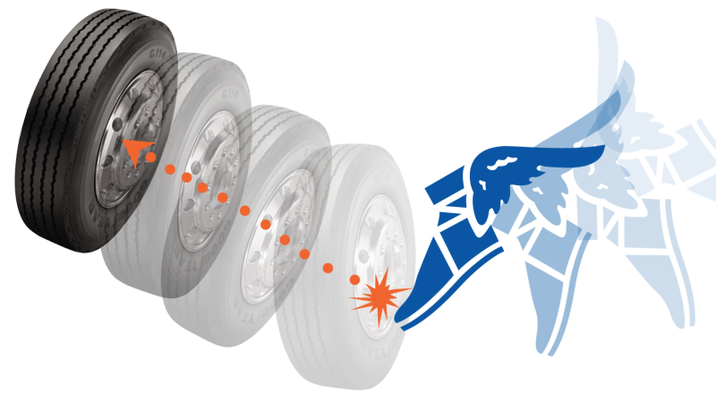 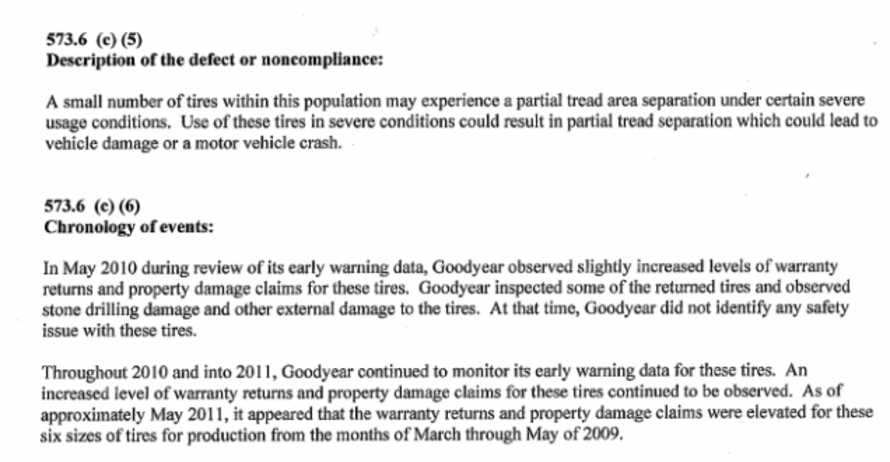 Goodyear said it based its conclusion on a “thorough analysis” of warranty adjustment and property damage claim data.

The company looked into a possible defect throughout 2010 and 2011, but it was a report of a single injury in the third quarter of 2011 that lead it to conclude, “in the interest of customer satisfaction,” to “conduct a voluntary recall of these tires.”

Friedman said federal law doesn’t “explicitly define” how a company can determine that a part or vehicle “presents an unreasonable risk to safety.” But in order to determine whether a defect exists, NHTSA needs to be aware of possible issues, like exceedingly high failure claim data.

NHTSA says it didn’t learn about the extent of G159 failure claims until attorney Kurtz secured a court order last summer to submit records to the agency.

“Among many concerns, claimants contend the Goodyear G159 tires were allegedly not designed for extended use at highway speeds as would be experienced during motor home operation,” NHTSA said.

The long delay is crucial, Friedman said. He used the General Motors ignition switch scandal as an example. It took NHTSA years to glean the extent of damage caused by the faulty ignition switches.

“If NHTSA had had that information [sooner], it would’ve been incredibly hard for the agency not to act,” he said.

Friedman said there’s a number of reasons that could explain why Goodyear never issued a recall. Perhaps, like GM’s explanation for the ignition switch scandal, relatively few people in Goodyear’s management team knew about the problem. (Jalopnik has reported that Goodyear executives signed off on G159 settlements that acknowledged its own internal tests showed the tire failed when used on RVs at highway speeds.)

When it comes to the Wrangler Silent Armour tire recall, Friedman said another possibility is that Goodyear’s single injury claim over that tire “wasn’t involved in a settlement.”

“And therefore it had to be sent to NHTSA,” Friedman said, “and they decided, given this was public, let’s act. Whereas, in the [G159] they’d have to shield it”

Regardless, he said, “it all gets back to information.”

But with what’s now understood about the G159, Friedman said it sure seems like a safety recall should’ve been issued.“Without digging into the details on the surface,” he said, “it certainly looks pretty clear.”

Cause it would cost them a lot of money.

Really no other reason.

Money is more important to companies than life.

When it comes to people’s lives and public safety versus profit; profit always wins.

Like kids who broke a window and panicked trying to get their story straight and then two hours later they’re framing the neighborhood cat for murder.

My buddy bought a camper with these tires on it a few years back. Had a rear blow-out that took out his radiator. Fixed it, and checked all the tires and they all looked visibly fine. No cracks, no touching on the dually’s, pressure was perfect, and the tread was good. Welp, he had another blowout, thankfully on the rear. It was then he decided to replace the rest with fresh rubber. My jaw dropped after reading the first article about these. It’s too late now to try to get any reimbursement from GY though.

I Need A Fun Upgrade From My 20-Year-Old Camry! What Car Should I Buy?Tom McParland
Yesterday 12:23pm
Jalopnik

The First Teardown Of A Tesla Model 3 Battery Is Quite SurprisingJason Torchinsky
Wednesday 2:00pm

Who's At Fault When Crashes Happen With Tesla's Autopilot?Ryan Felton
Yesterday 3:50pm

GM Is Expanding Its Semi-Autonomous 'Super Cruise' System To All U.S. Models Ryan Felton
Wednesday 11:10am