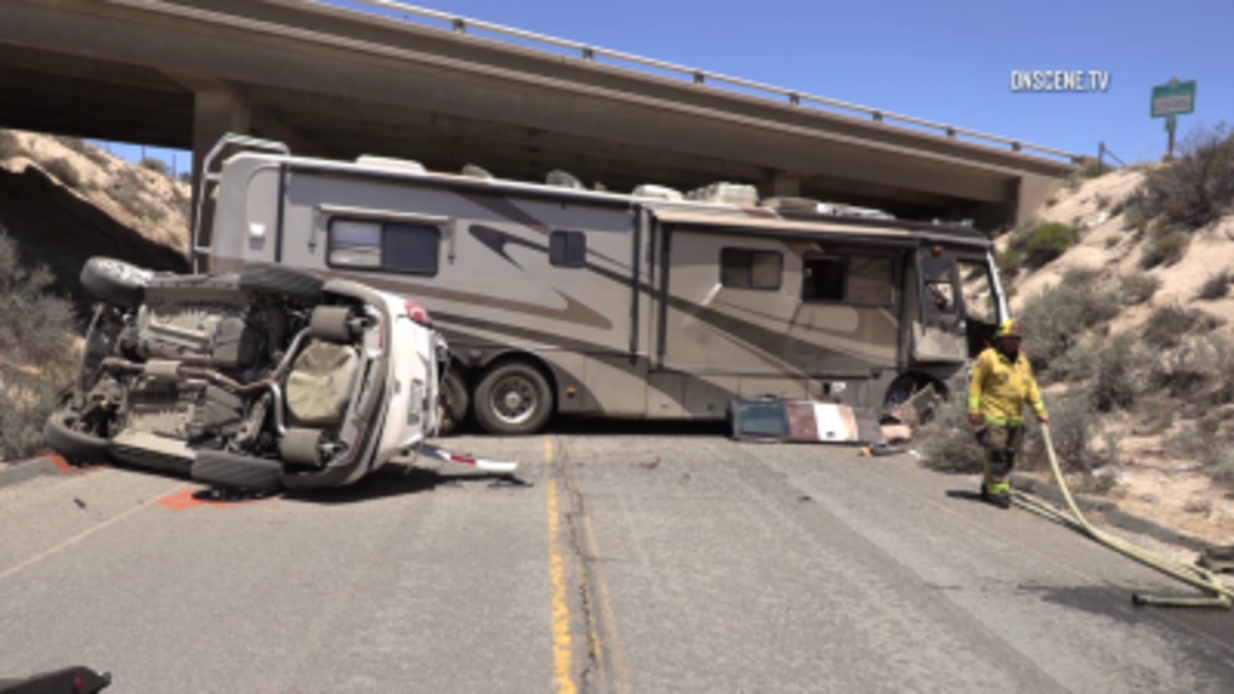 Police and fire crews were called when an RV veered off the road and crashed through a fence at Cimarron Pointe Apartments near N. Council Road and W. Wilshire Blvd.

Police say the RV bumped a building.  However, there have been no injuries reported.The crash was caused by a tire blowout which prompted the driver to lose control 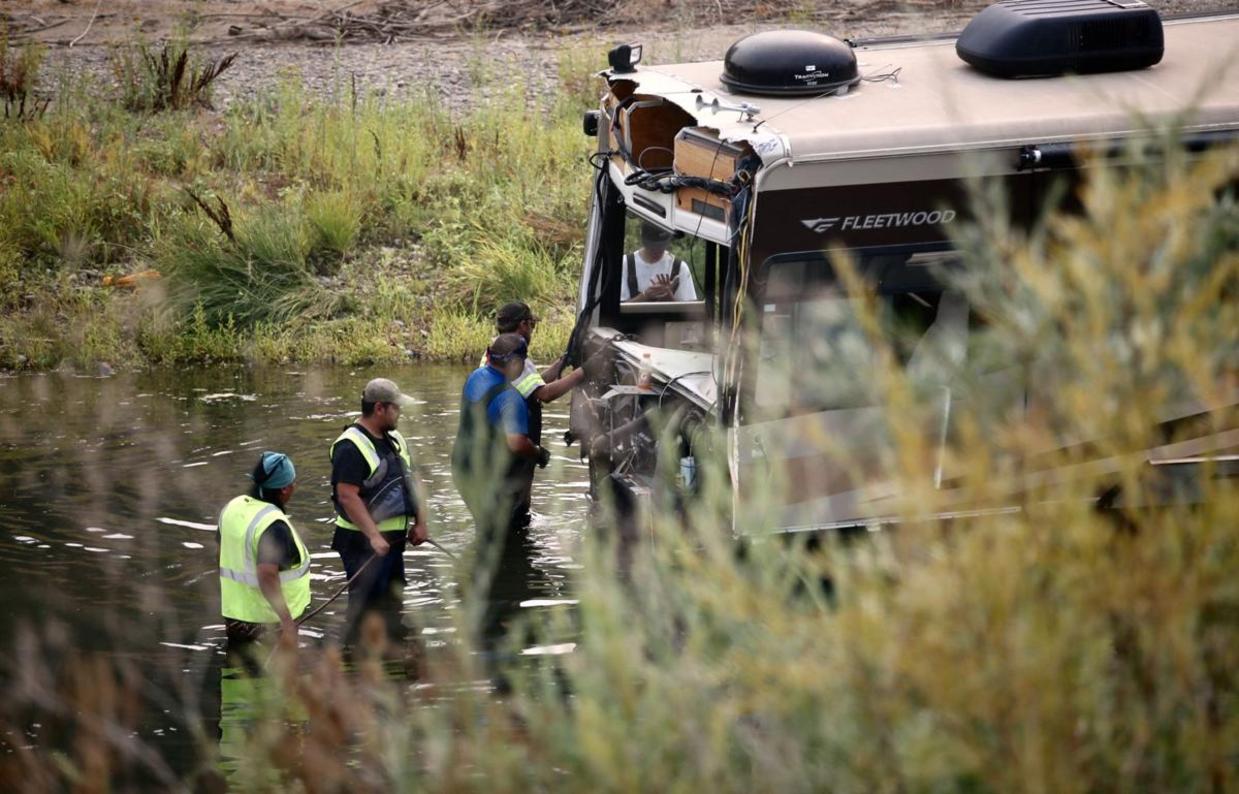 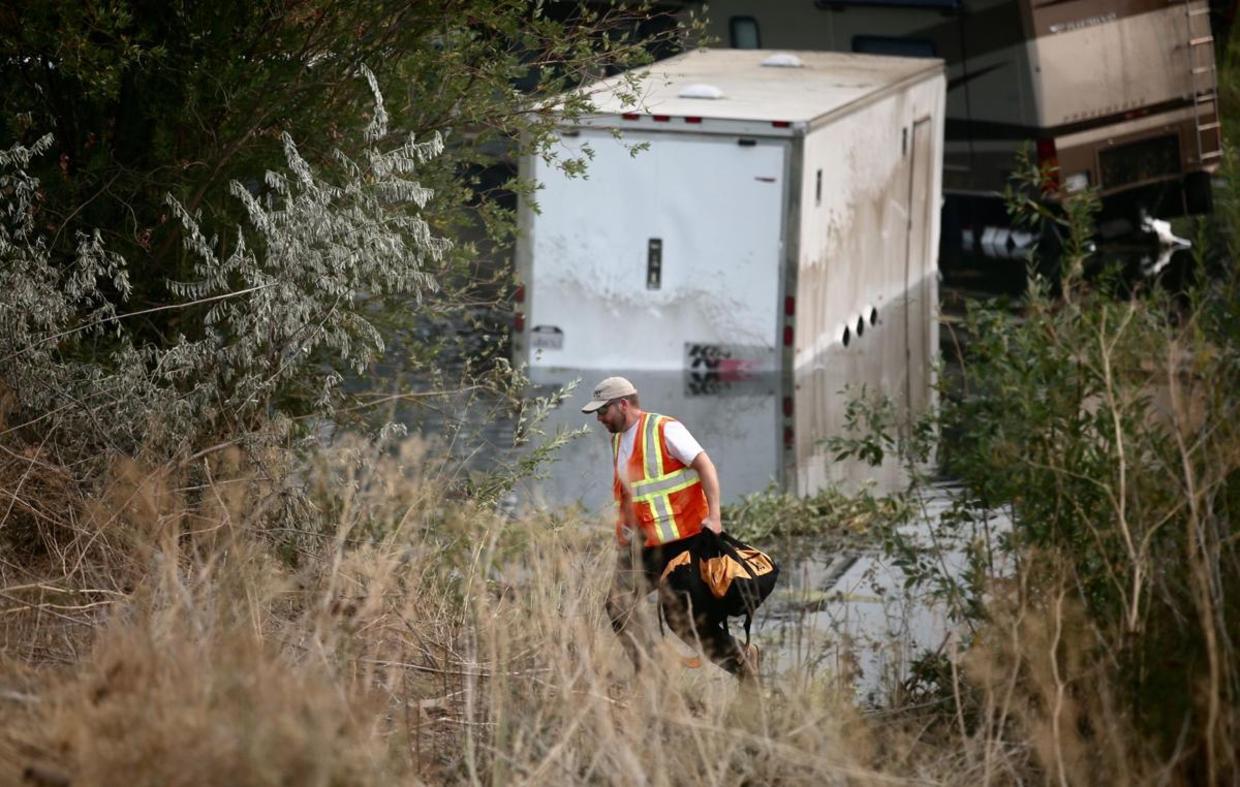 ZILLAH, Wash. -- A blown tire caused a motor home towing a race car in a trailer to go into the Yakima River on Monday, injuring one person and causing a fuel spill, according to authorities.

Matthew M. Woodward, 36, of Lakewood, Calif., was driving east on Interstate 82 about a mile east of the Meyers Road exit when his Providence Fleetwood motor home blew a tire shortly after noon, according to the Washington State Patrol. The RV and towed race car went into the river, the State Patrol reported.

Woodward and three other people, including a 3-year-old girl, were able to get out of the motor home, according to the news release. One of Woodward’s passengers, Naomi Woodward, 37, was taken to Astria Toppenish Hospital; her condition was not immediately available.

A tire blow-out is to blame for a crash that killed four people west of Santa Rosa Wednesday.

Police say an RV towing a Chevrolet Tahoe was traveling eastbound on I-40 when it had a blow-out on its front driver-side tire. The blow-out pulled the RV to the left causing it to travel across the median and into oncoming westbound traffic.

The RV collided with a Honda Pilot traveling westbound and then hit a Ford Escape head-on.

The impact with the Escape fatally wounded the four people riding inside. 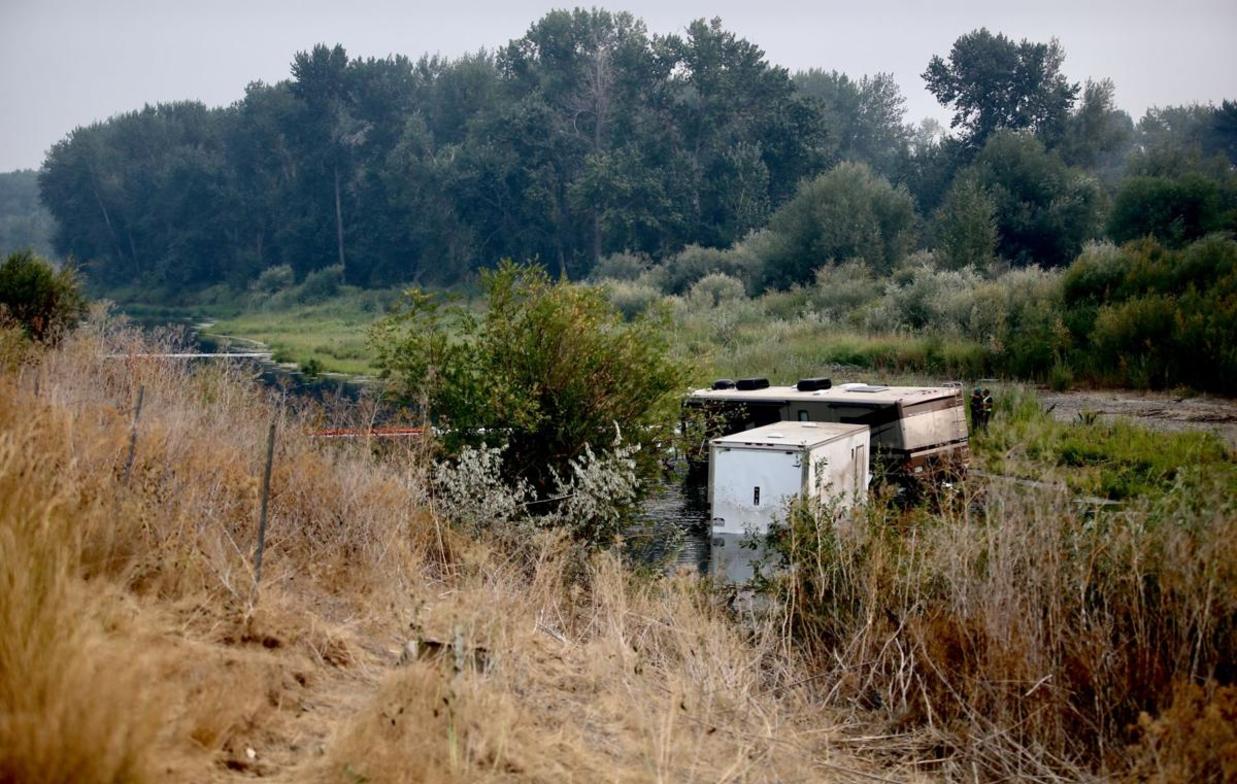 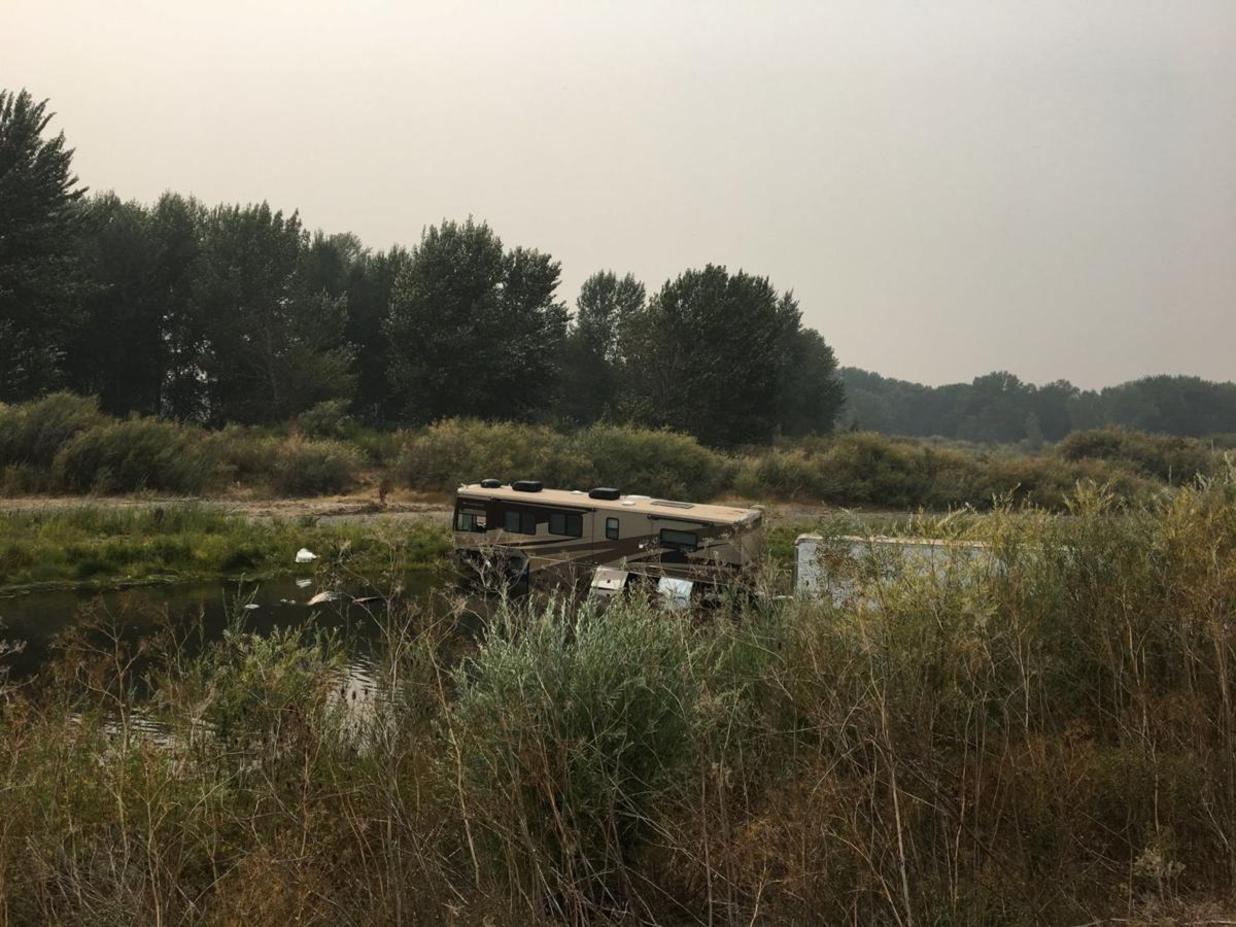 An Arizona woman injured last month when the recreational vehicle she was driving blew a tire, rolled and flew off Interstate 8 died almost two weeks later in a San Diego hospital, authorities said.Yuma resident June Seikel, 76, was heading east on I-8 toward her hometown on July 23 when her RV crashed and flew off the freeway at Ribbonwood Road near Boulevard, east of the Golden Acorn Casino, according to the California Highway Patrol and San Diego County Medical Examiner’s Office.

Seikel and another person in the vehicle were injured, a CHP spokeswoman said at the time. Seikel died nearly two weeks later, on Aug. 5, at Scripps Mercy Hospital in Hillcrest.

The crash happened a little before 11:30 a.m., and witnesses reported that a tire on the RV had blown out, causing the crash, CHP Offier Mary Bailey said.

The RV “struck the center divide and ... rolled over multiple times,” according to the Medical Examiner’s Office.

The vehicle launched off the overpass and landed on Ribbonwood Road, which runs underneath the freeway, Bailey said. Emergency crews had to cut Seikel and another person from the RV; both were taken to hospitals.

Click Here For Original Story
Click Here For Dangerous RVS Did You Know Anybody With A Pulse Can Drive One
Using A Regular License At Any Age?

CAMPO, Calif. – A man and a woman were critically injured Monday when the recreational vehicle they were driving blew a tire and crashed 35 feet off a bridge.

The single-vehicle accident happened at about 11:30 a.m. on the Campo Indian Reservation at the Cranbrake crossing on eastbound Interstate 8. Witnesses told the California Highway Patrol that the RV was going about 70 mph when a tire blew out. The RV lurched ont the right shoulder of the freeway and went off the bridge, landing on the roadway below the freeway bridge.

Rescuers carefully removed the victims from the wreckage. They were both flown by helicopter ambulance to Sharp Memorial Hospital in San Diego. Both victims were in critical condition, the CHP said.

Two dogs were in the RV. They were relatively unharmed and taken from the scene by a witness.

The names of the victims were not immediately available. The license plate on the RV was from Montana. 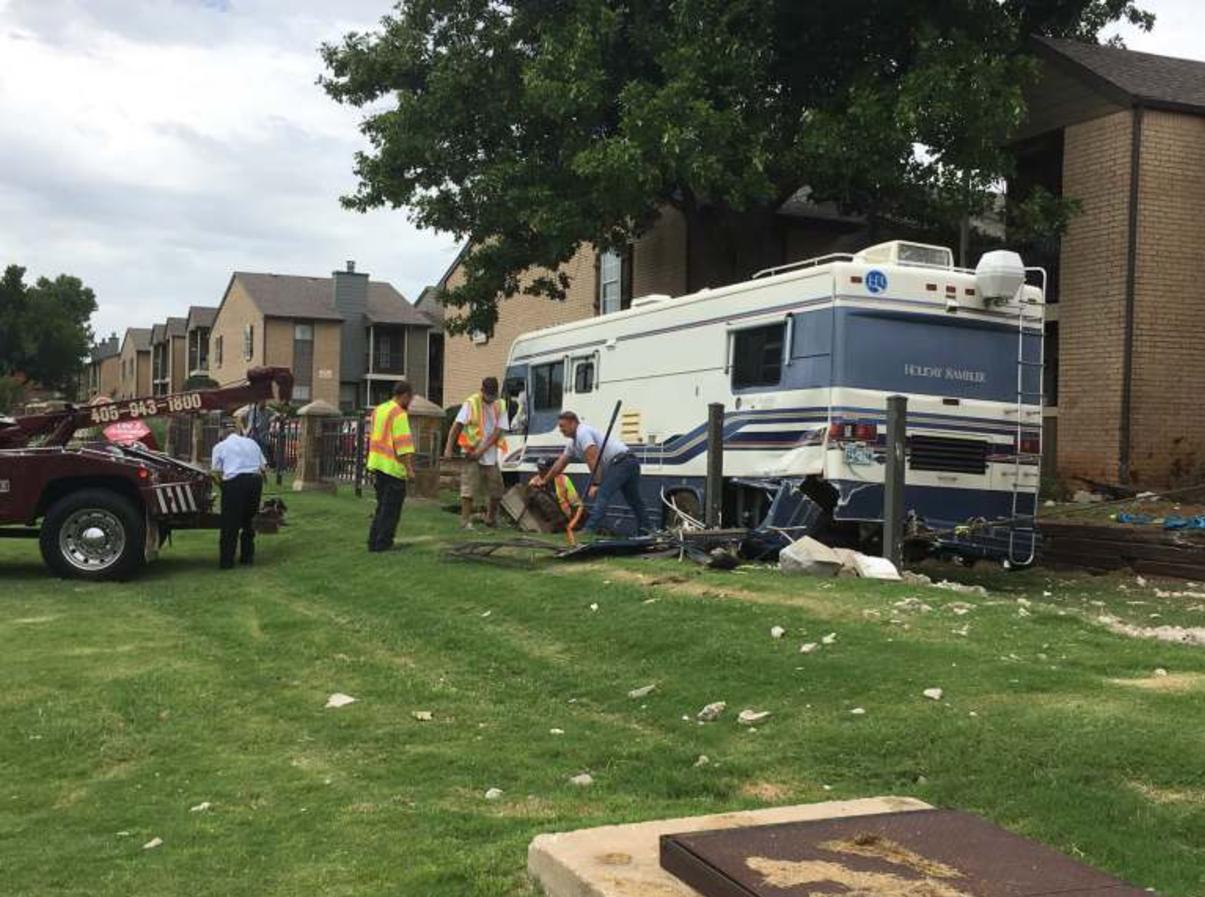 Troopers did not specify what type of race car was in the trailer.

A Yakama Nation hazardous materials team and the state Department of Ecology were on the scene putting a floating boom in the river to contain diesel and high-octane gasoline that were leaking from the vehicles, Ecology spokeswoman Joye Redfield-Wilder said.

It is not known how much fuel was in the vehicles, Redfield-Wilder said.

We will update with recent RV Tire Blowouts On This Page

We keep asking questions...notice in all of these reports no reporter or no police investigation teams ever ask or publishes "What Brand Of Tire Blew Out"  How can we gather the necessary evidence if our own Government and Reporters fail to answer our questions.

They certainly let us know about the TAKATA Air Bag issue, IKEA falling furniture,,,,The Firestone 500....but not a single mention on the brand of all these RV tire blowouts....why? 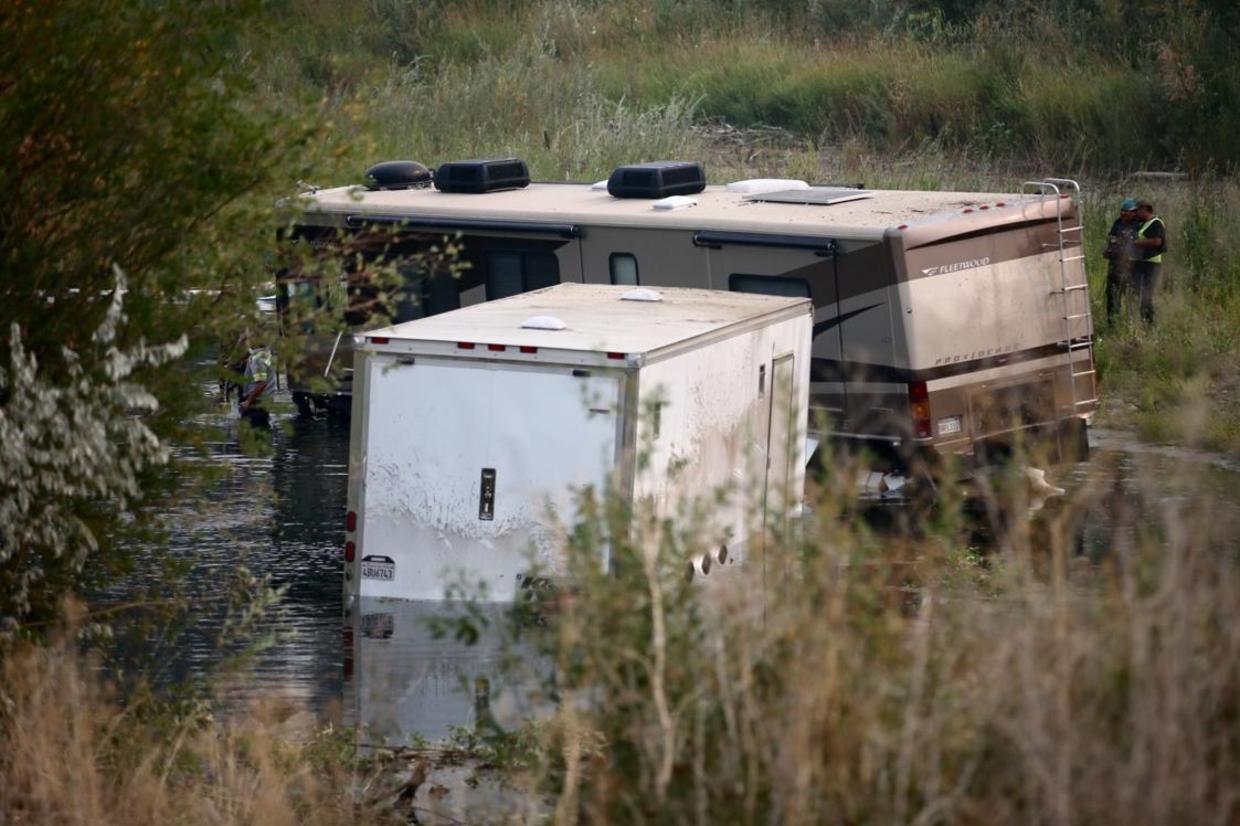