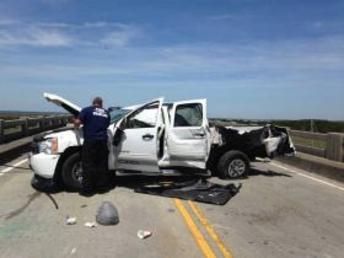 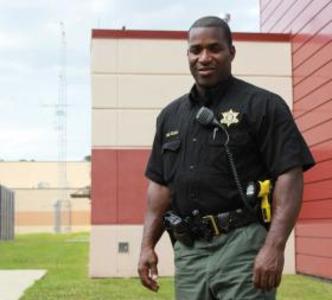 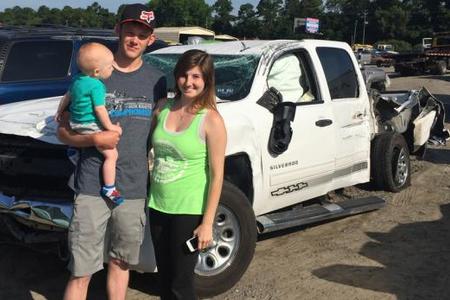 Eric Parsons and Amie Bowling, both 19, of Hurricane, W.Va., stand in front of their totaled 2010 Chevrolet Silverado after it collided with a wayward trailer Thursday on the Lazaretto Creek Bridge. (courtesy Amie Bowling)

A West Virginia couple is crediting a Chatham County Sheriff’s Office deputy with saving their lives Thursday during a wreck on the Lazaretto Creek Bridge by Tybee Island.

Deputy Demetrius Jelks, however, says he’s equally thankful they were there. While they say his actions stopped them from crashing over the bridge, he says they kept him alive, too.

“He’s just being a brave, modest cop,” she said. “He deserves recognition.”

Jelks was headed east on U.S. 80 about noon as Bowling, her boyfriend Eric Parsons and their 1-year-old son were headed west across the bridge. A trailer being towed in front of Jelks came loose, hitting the 2010 Chevrolet Silverado that Parsons was driving.

“It ripped off the whole back side of our truck and caused us to go up on two wheels,” said Bowling, 19.

“(The truck) was going up in the air, and it was coming toward me,” Jelks said.

He reacted in a way that would both avoid a head-on collision with his patrol SUV and stop the Silverado. The 48-year-old deputy drove his SUV a bit to the side and moved to where the truck would strike his driver’s side, and then he hit the brakes.

“It caused us from going over the side of the bridge,” Bowling said. “If it wasn’t for him, we’d be dead.”

The Silverado flipped three times after the impact, but everyone was OK. Jelks got out of his SUV and radioed in to dispatch that he needed EMS and police to the scene.

Jelks says he would have been in much worse shape if Parsons, 19, weren’t a good driver.

Jelks said he and Parsons both told each other they did a good job.

The nine-year sheriff’s office veteran said it was quick thinking.

“It was one of those situations where you really don’t have time to be nervous or scared,” he said.

Bowling was taken by ambulance to a hospital to be checked out, but said all injuries were minor. Jelks said the driver of the vehicle that lost its trailer was not injured, either.

Metro police had to block the road for about two hours while the accident scene was cleared.

Jelks’ patrol SUV, which he was driving onto Tybee for his duties as a street operations deputy, took a good bit of damage to the rear. The truck Parsons was driving was totaled, and the couple has since returned home to Hurricane, W.Va., from their first family vacation.