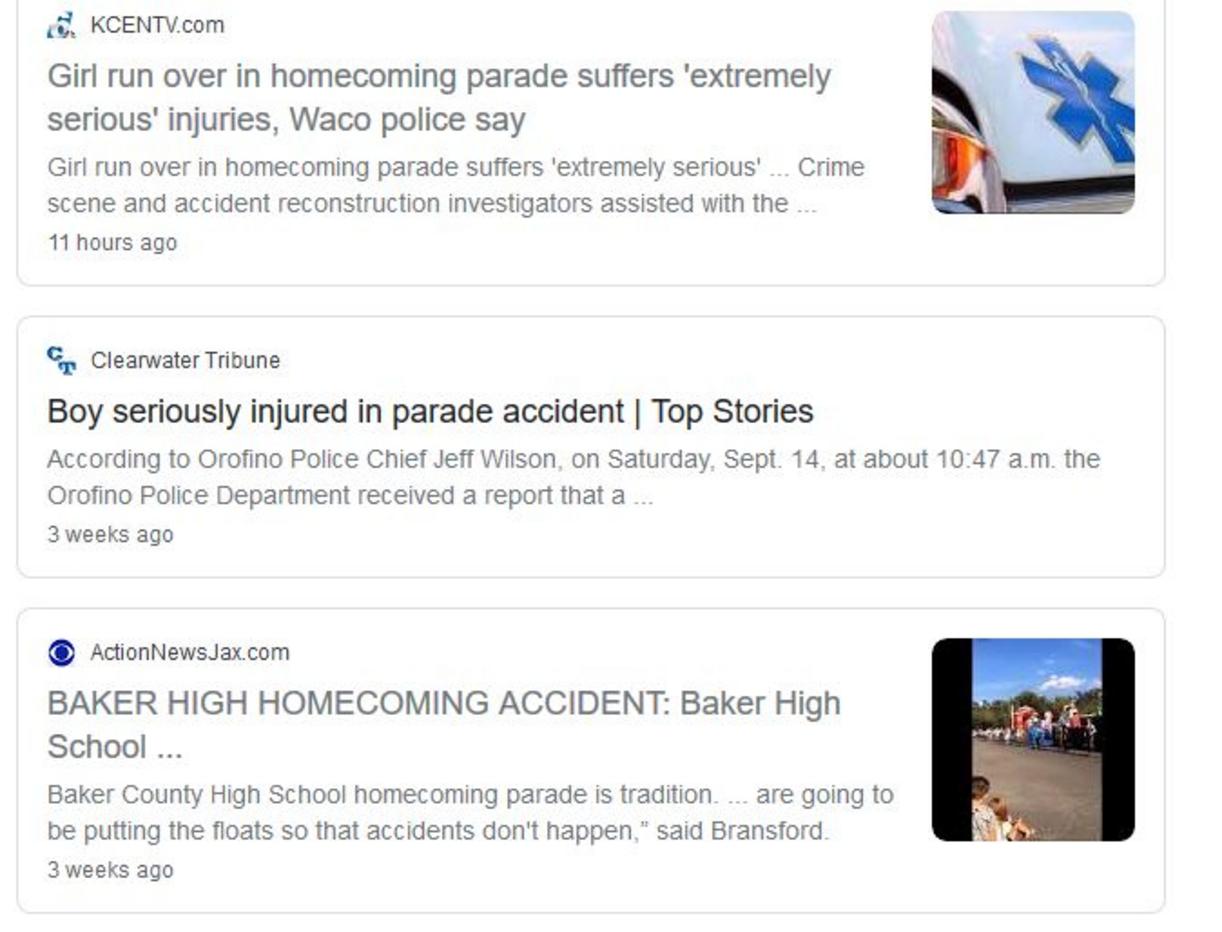 WACO, Texas — A young girl was in serious condition Friday after being run over in a homecoming, according to the Waco Police Department.

Police said the girl was riding on a homecoming float that was being pulled by a pickup truck in the 100 block of Cedar Ridge when she fell off and was run over.

The girl was taken to Baylor Scott and White Hillcrest before she was flown to McLane's Children's Hospital in Temple, WPD said.

A fifth-grade Bosqueville Independent School District student who fell off a homecoming float Friday afternoon has been flown to McLane Children’s Hospital in Temple with serious injuries, according to officials.

The student’s name has not been released.

“She is currently undergoing testing to determine the extent of her injuries,” the school district said in a statement. “Our prayers go out to the young student as she is being treated. Our thoughts and prayers are also with the family, fellow students and those that cared for her.”

Waco police responded to an injury accident in the 100 block of Creek Ridge Drive in Waco on Friday afternoon, Sgt. W. Patrick Swanton said. Upon arrival, officers found that a girl riding on a homecoming float behind a pickup truck had fallen from the trailer and been run over.

Swanton said the “girl’s injuries are considered extremely serious.” She was transported to Baylor Scott & White Hillcrest Medical Center by ambulance and later flown by helicopter to McLane Children’s Hospital in Temple.

Crime Scene and Accident Reconstruction Investigators responded and assisted at the scene. The investigation is ongoing. 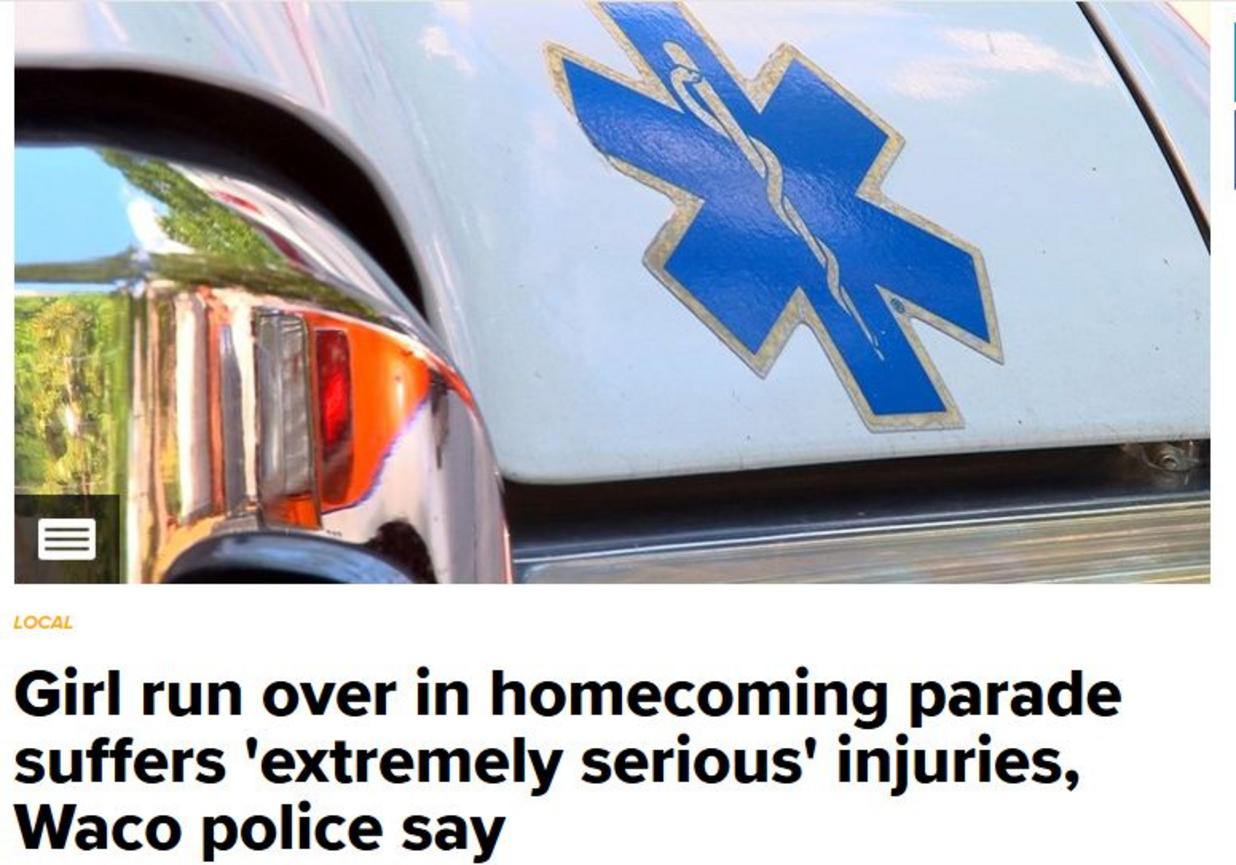 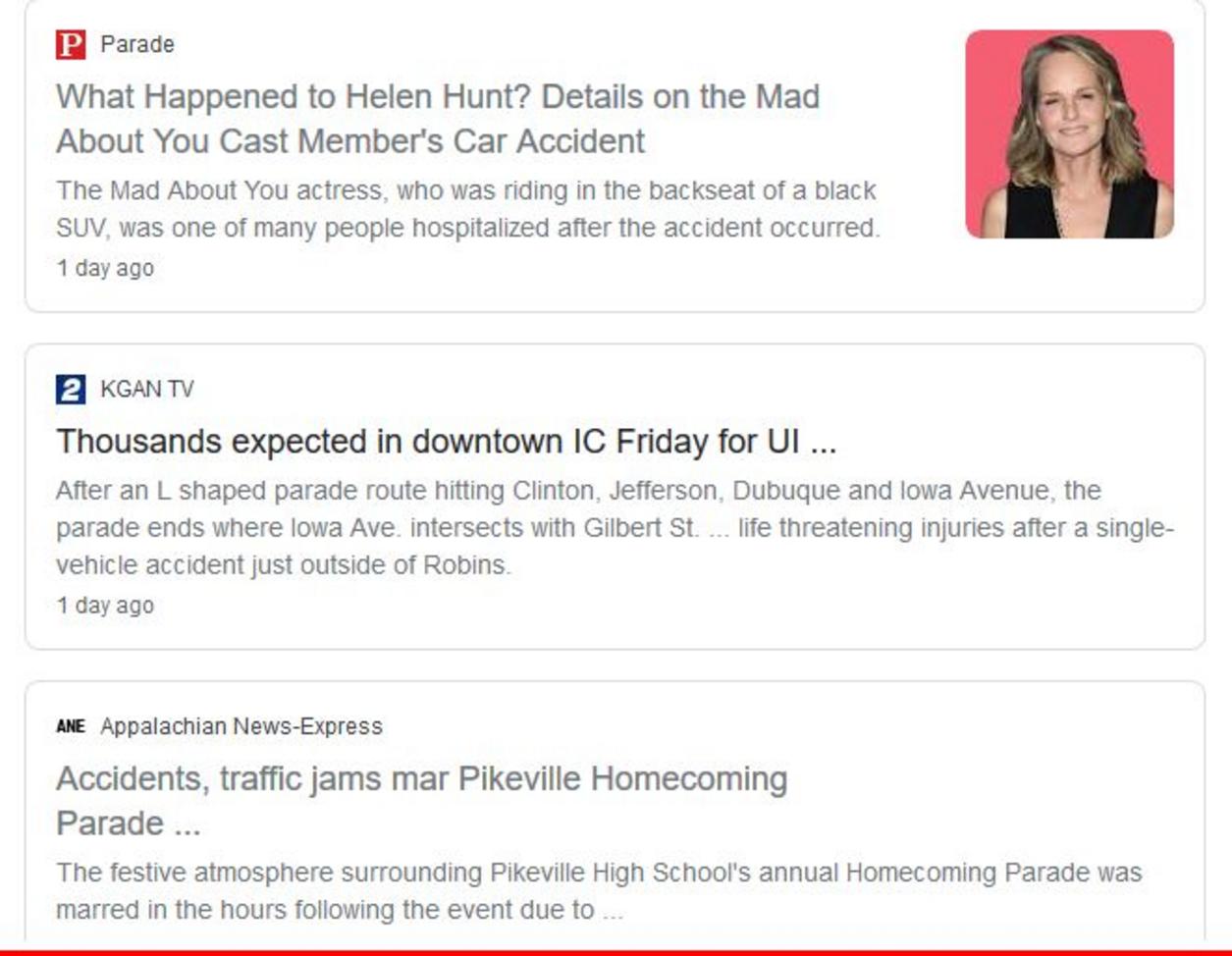 See A Pattern?  We call it a pattern of IGNORANCE. 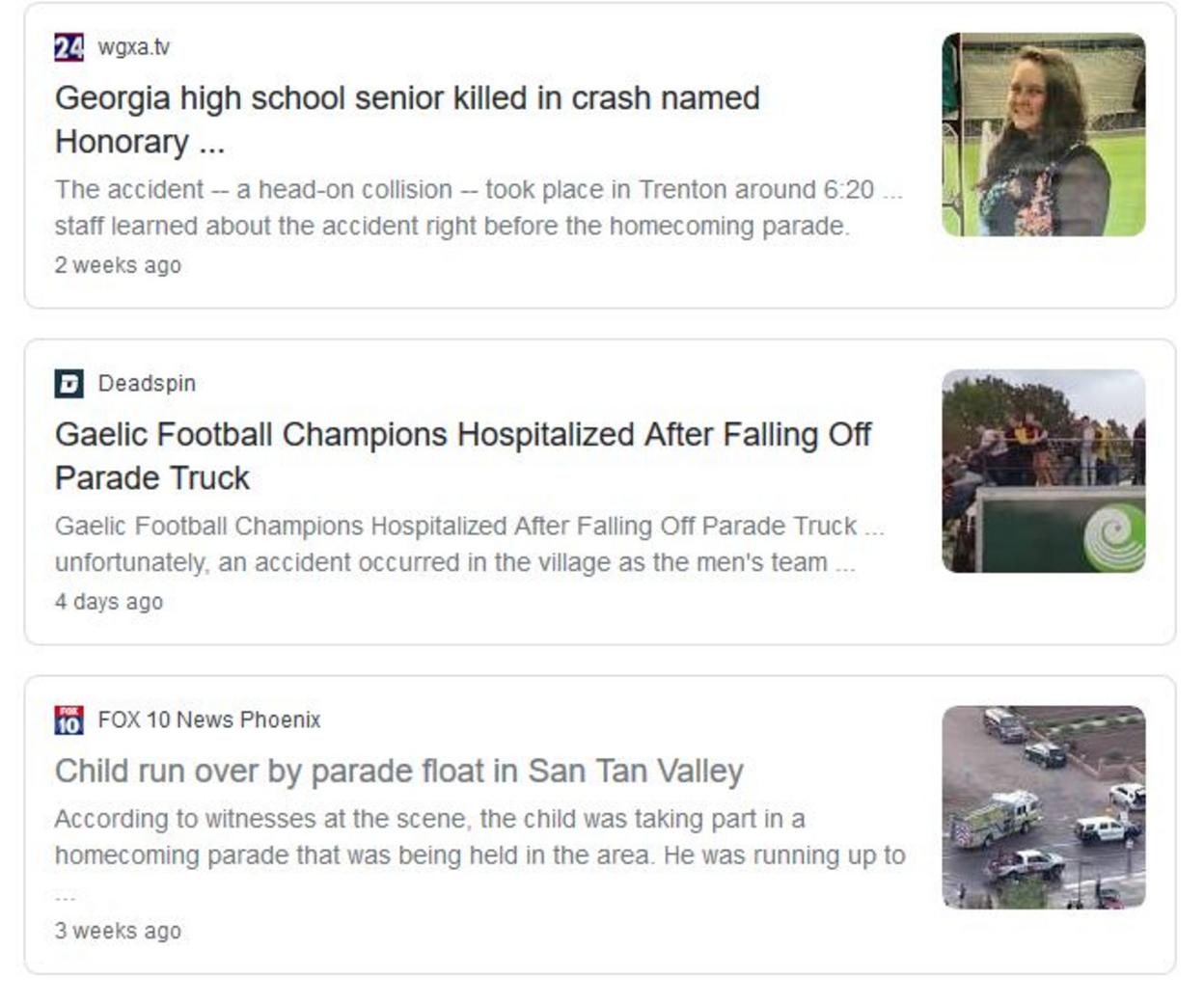 Parade Deaths Prompt Safety Recommendations for Localities
Most governments lack clear planning procedures and rules for parades. Read how localities can better prepare, along with a summary of recent parade accidents. 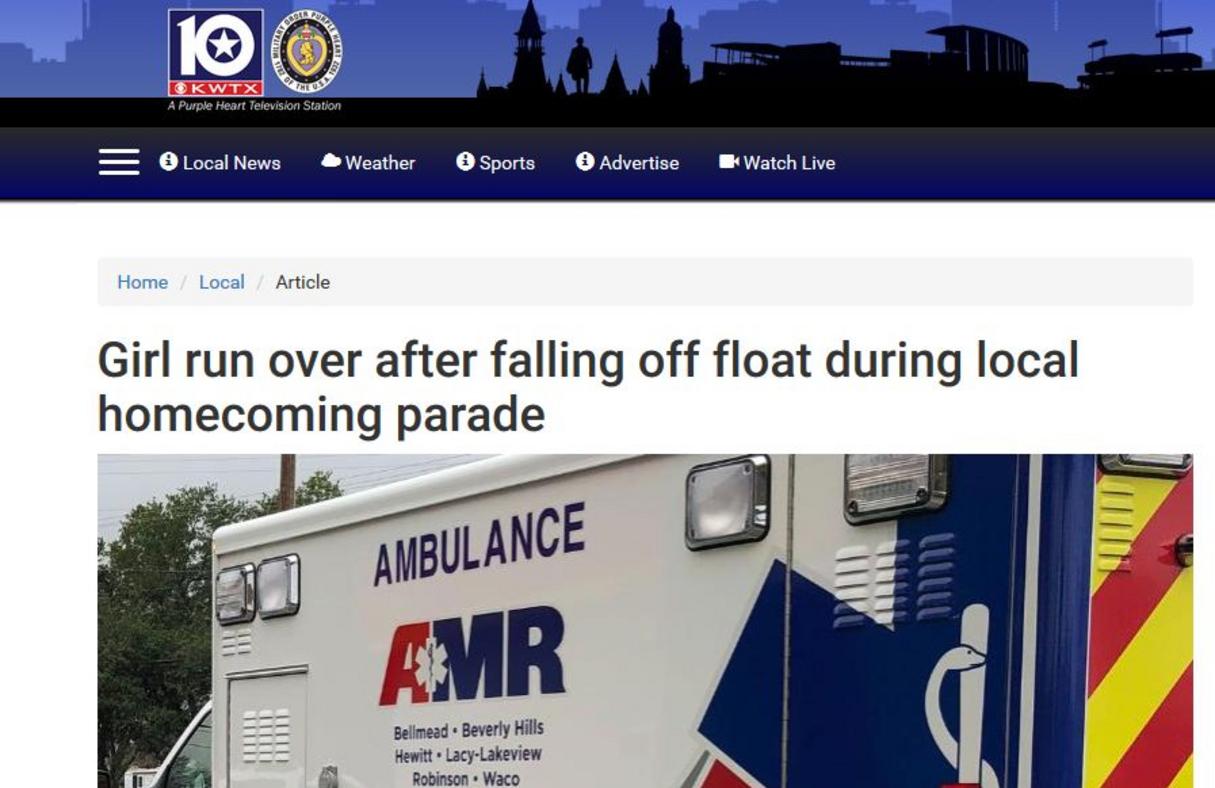 Click Here For www.paradesafety.org and see for yourself that almost everybody is trying to destroy and suppress
our cause?  Why?

WACO, Texas (KWTX) A fifth grade girl who was run over after falling off a float during the Bosqueville ISD’s homecoming parade Friday was flown to a Temple hospital with what police said were serious injuries.

The girl was riding on a float towed by a pickup early Friday afternoon in the 100 block of Creek Ridge in Waco when she fell off.

She was taken by ambulance to Baylor Scott & White Hillcrest Medical Center and then was flown to McLane Children’s Hospital in Temple.

No further details were released.

The accident evidently occurred as the parade got underway at around 2 p.m. Friday.

The parade was scheduled to proceed down Keys Creek Drive to Steinbeck Bend Drive and then west to Rock Creek Road and then north to the district’s stadium for a homecoming pep rally.