This was my argument in a committee meeting in Virginia when they had open debates on giving and making it a law that people driving must give  (3) feet for bike riders.

I stated that people who tow a trailer that is wider then the vehicle towing it cannot give (3) feet because the trailer does not allow that legal requirement.

They dismissed our concerns....well maybe this will change some minds.

But nooooooo all they do is destroy our cause.

A cyclist has appeared to have been knocked by a passing car trailer
In the video with over 16,000 views a car passes very closely before hitting them
A cycling equipment manufacturer compared the move to attempted murder

An Australian cyclist has been clipped by reckless driver towing a trailer in a dangerous overtake.

The footage taken along Beach Road in southern Melbourne was shared to Twitter on Tuesday by bike camera manufacture Cycliq has been viewed over 16,000 times.

Cycliq asked its cycling community how the dangerous overtake was any different to attempted murder.

Question: If someone shot a gun so close the bullet clipped someone's ear (even if they claimed that they missed on purpose) what would they be charged with?' they asked.

In the video a cyclist is seen riding along a road with no visible bike lane when a silver Holden Commodore towing a trailer approached.

The Holden is seen making some effort to move around the cyclist but swerves back too quickly and the cyclist is knocked by the spare tyre.

A loud bang is heard as they apparently make contact and the car is seen accelerating away.

It is not known where the video was taken but an unused bike path is spotted next to the road suggested the cyclist may have also been in the wrong.

Many cyclist said they had experienced similar behaviour from cars towing trailers.

'I got knocked off by a trailer a few years ago, ripped tights and thankfully only shaken, vehicle never stopped, took number and phoned the police, not interested as not injured so a good reason for a camera,' he said.

Other people pointed out that accusing the driver of attempted murder was taking the situation too far.

'You would have to prove intent first. The only thing this video proves, is that people need towing endorsements on their license or they shouldn't be towing trailers,' a man said.The Daily Mail Australia has contacted Cycliq for comment. 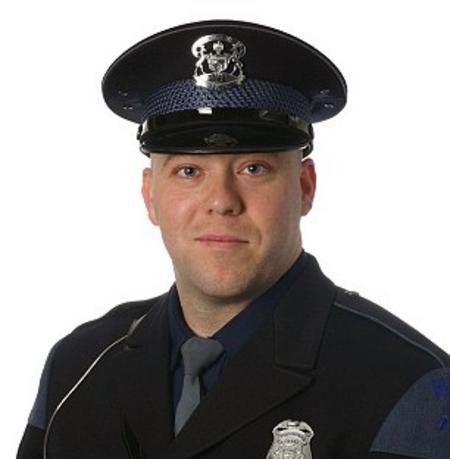 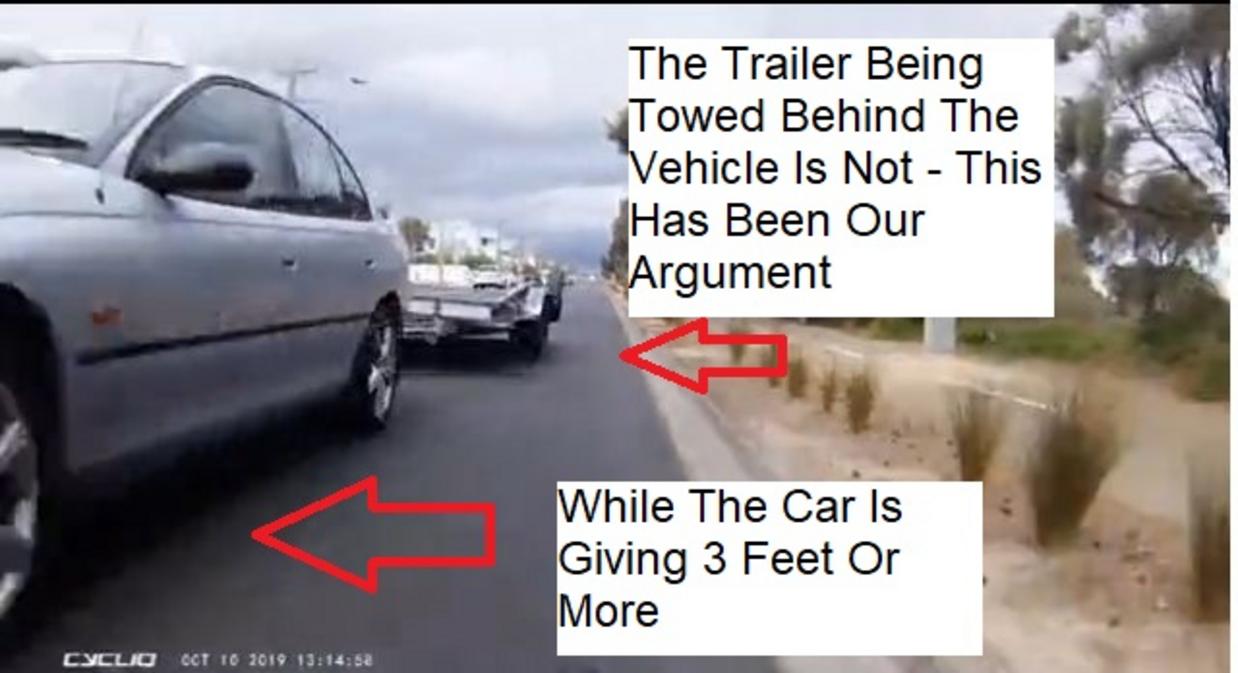 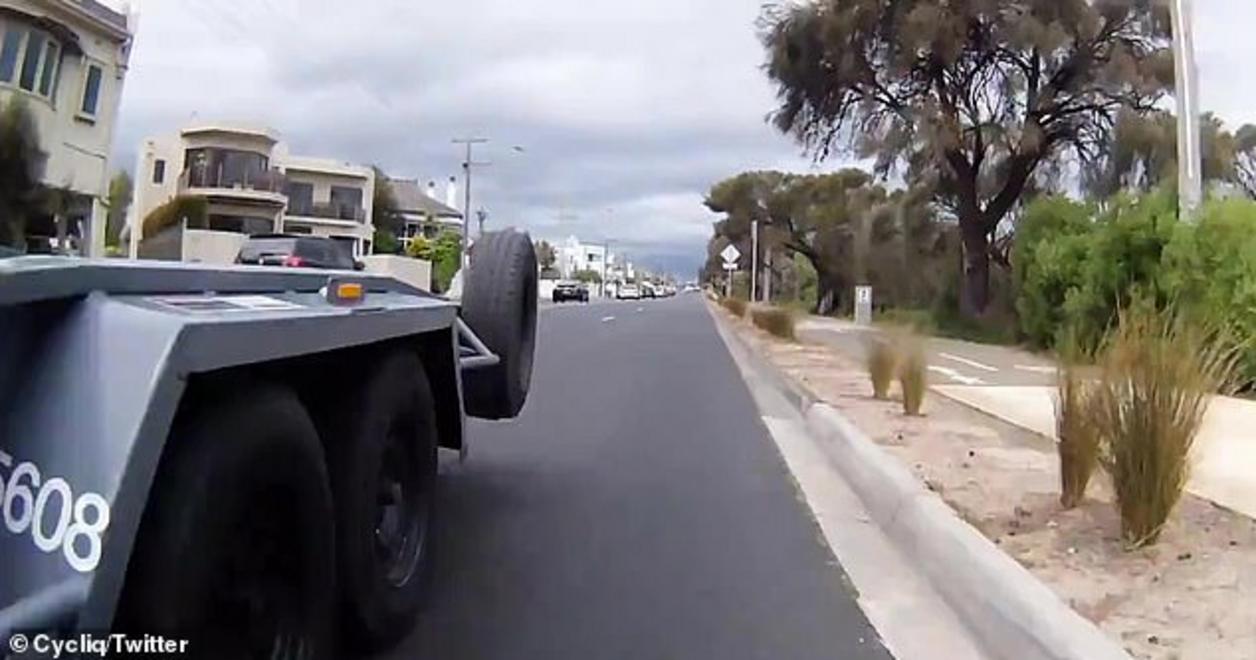 By Regina F. Graham For Dailymail.com

A Michigan State Police trooper died after being knocked from his motorcycle along an interstate and dragged several miles by an elderly motorist pulling a trailer.

Police say that at about 6:30am on Friday, a 72-year-old man in a four-door car hauling an empty trailer hit Michigan trooper Chad Wolf while he was riding his marked state police motorcycle in the right lane heading northbound on Dixie Highway in Springfield Township.[Tragic: Michigan State Police Trooper Chad Wolf (above) died after being hit on his motorcycle and dragged under a trailer for several miles on Friday]
+4

Tragic: Michigan State Police Trooper Chad Wolf (above) died after being hit on his motorcycle and dragged under a trailer for several miles on FridayThe elderly driver was traveling in the left lane, but abruptly switched lanes in an attempt to merge onto I-75 north, State Police 1st Lt. Michael Shaw told

The motorist hit the 38-year-old married father of four and proceeded to drag him trapped beneath his vehicle for 'several miles' before pulling into a rest area in Holly.

A number of witnesses saw what had happened and called 911.

'We all wonder how that could happen,' State Police 1st Lt. Monica Yesh told MLive.com.

Wolf was immediately rushed to the emergency room at Genesys Regional Medical Center in the Grand Blanc Township, but died Friday surrounded by his wife, relatives, fellow troopers and friends.

'It is with very heavy hearts that we confirm the death of one of our own, Trooper Chad Wolf,' State Police Director Col. Kriste Kibbey Etue said in a statement.

'Our troopers know the dangers they face each time they put on their uniform, but the calling they feel to serve the public is stronger than any fear. 'Trooper Wolf will forever be remembered as a loving husband, dedicated father and outstanding public servant.

An investigation is ongoing and no charges have been filed, WDIV reported.

Wolf joined the state police in 2008 and served posts in the Jackson, Flint and Detroit areas.

He grew up in northwestern Illinois and earned a bachelor's degree in youth ministries from Pensacola Christian College in Florida.

Wolf worked with troubled teenagers at Promise Village Home for Children in Davisburg before becoming a state trooper.

'My heart is broken for Trooper Wolf's family, his friends and his Michigan State Police colleagues,' Snyder said in a statement.

The troopers who serve us every day in the name of public safety are incredibly brave, selfless and honorable.

'This loss will be felt deeply by the entire state of Michigan.

'Trooper Wolf today laid down his life in service to others, and for that his family will never be the same.

'The First Lady and I extend our heartfelt condolences to them.

'Our thoughts and prayers also go out to everyone at the Michigan State Police who had the honor of working with Trooper Wolf, as well as those who knew him in the communities he served.' 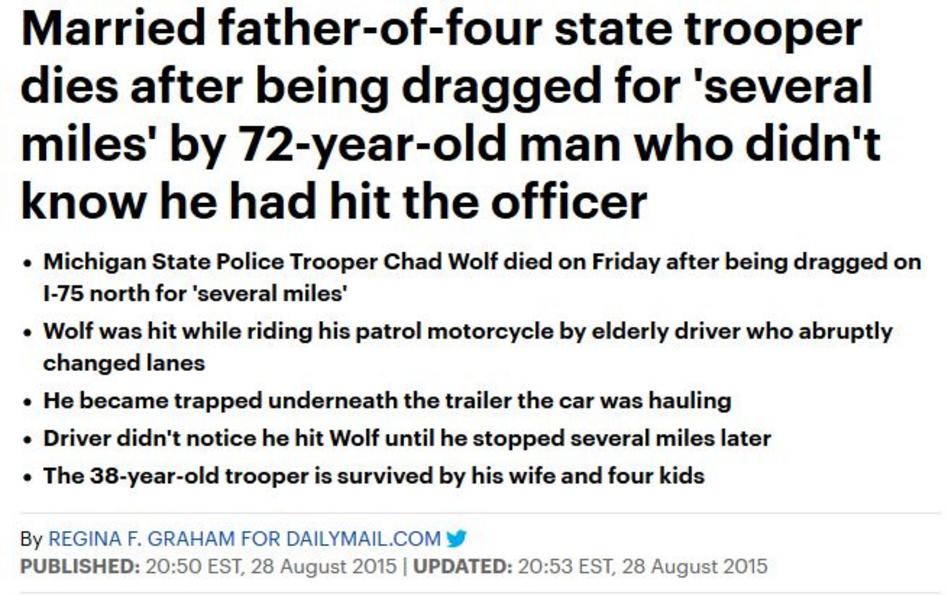 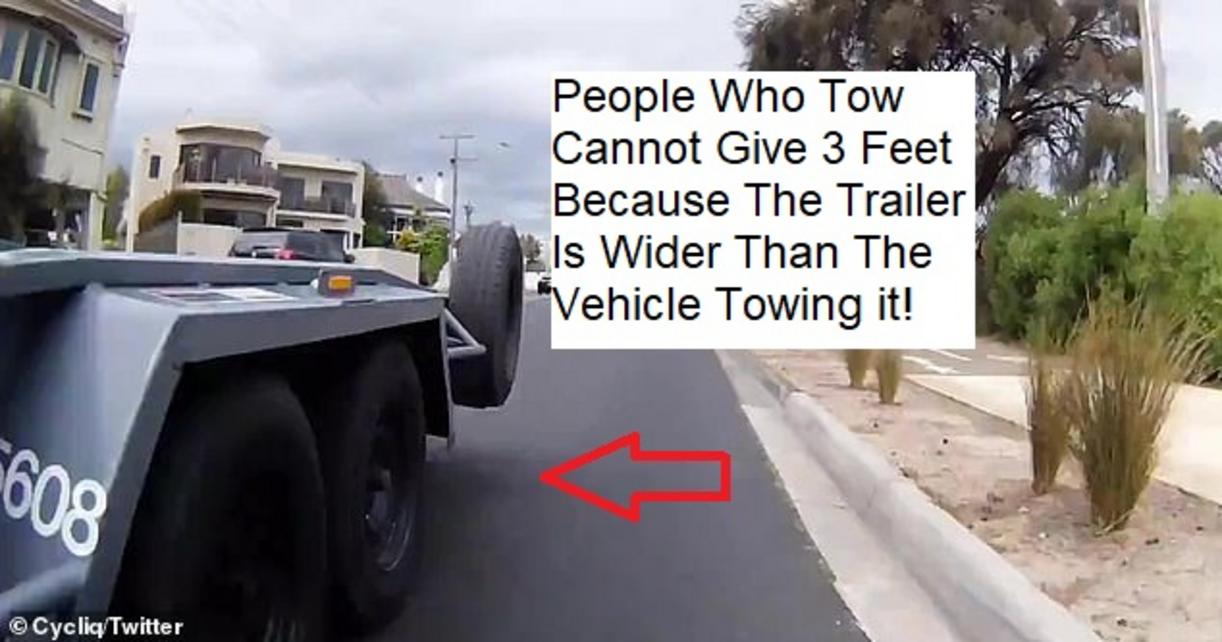