The wheel rim was pretty much destroyed after shearing off the hub of a boat trailer being towed down a Manitoba highway northwest of Winnipeg. (Photo/ Brad Dokken, Grand Forks Herald)

Trailers, I’ve concluded, are a pain.

Yes, they’re handy and essential pieces of equipment, but trailers also are disasters on wheels just waiting to happen. And often at the very worst times in the very worst places.

From bent axles to smoking wheel bearings, I’ve had a few trailer mishaps over the years but nothing to rival the latest brush with disaster. This time, the trailer wasn’t mine. This time, I was more of a spectator than a participant.

We were on our way home from a northern Manitoba fishing trip and had left The Pas, Manitoba, in my friend’s truck towing his boat shortly after noon Monday, June 10, for the 7-hour drive to his home northeast of Winnipeg.

The first few hours passed without incident, other than two roadside black bears that prompted me to slow down along Provincial Highway 60, a lonesome road about 90 miles long winding southeast through lakes and trees south of The Pas.

I slowed down as a precautionary measure, but the bears stayed off the road like good bears should.

Good thing, too, because Highway 60 would be a very bad place to hit a bear or have trouble of any kind. Cellphone service is nonexistent, and the only development even vaguely resembling civilization is Easterville, Man., a town with a population of “71 living in 17 of 26 of its total private dwellings,” according to Wikipedia.

Have trouble on the “Easterville Road,” in other words, and you’re up the proverbial creek without a paddle.

After a much-needed nap, my friend who owns the truck took the wheel when we got to the end of the Easterville Road and stopped at the intersection of Provincial Highway 6, the highway we’d follow for most of the remaining 5-or-so hours of our trip home.

The lakes and forests of northern Manitoba gave way to prairie and farmland as we drove south, and we were making excellent time when our smooth ride hit a rough spot north of St. Laurent, on the southeast shore of Lake Manitoba.

We were down to our last hour of windshield time when my friend who was driving made a sudden exclamation and quickly pulled to the shoulder of the road.

I was thinking flat tire — until I watched a wheel from the boat trailer rocket past us down the highway. ...

I’m no expert when it comes to things mechanical, but I know it’s not good when a wheel from the boat trailer passes you going down the highway. I had no idea unattached wheels could roll that fast.

For reasons I still don’t completely understand, the wheel on the left side of the boat trailer came off, the rim completely shearing from the lug nuts that secured it to the hub. By some miracle, the wayward wheel didn’t hit an oncoming vehicle on the busy highway.

The wheel veered into the east ditch and rolled perhaps 100 yards before coming to rest in some brush.

The trailer’s spare tire was of little use because the hub was severely damaged. But in a miraculous turn of events, my friend knew a guy who lived within 10 miles of the breakdown and was able to reach him by cellphone.

Long story short, the acquaintance who saved our day was mechanically savvy, and he cobbled together a hub that allowed us to limp the boat and trailer back to his house on the shore of Lake Manitoba. We probably could have made it all the way back to our destination north of Winnipeg, he said, but my friend who owns the boat didn’t want to take any chances.

One trailer misadventure was enough, so he left the boat overnight and returned the next day with new hubs that got him back home without incident.

Since then, he’s replaced the entire axle on the trailer so there shouldn’t be any issues for the foreseeable future.

Bad as it was, it could have been so much worse. The wheel could have fallen off on the Easterville Road in the middle of nowhere — when I was driving — or it could have rolled into the path of an oncoming vehicle.

Those are just a couple of worst-case scenarios that come to mind. Instead, we can look back on the incident and laugh, which is the best outcome anyone can hope for when it comes to trailer misadventures.

Or misadventures of any kind, for that matter. 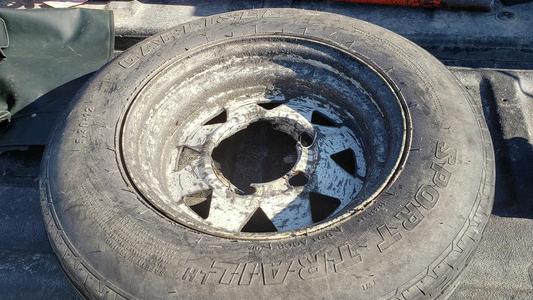