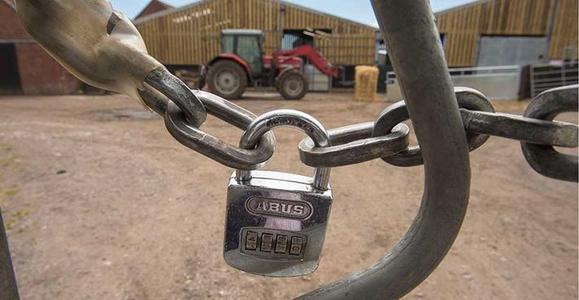 The Farmers In The United States And In The United Kingdom are the ones who resist our recomendations to help prevent stolen trailers....now it is they who are getting their trailers stolen.....

Police are warning farmers to be extra vigilant this autumn following a spate of quad bike and trailer thefts on farms across Dorset.

Last September and October, Dorset Police reported a spike in the theft of tractors, trailers and quads from farms. The force is urging farmers to take steps to prevent becoming a victim of machinery theft.

Figures published by Dorset Police show 18 quad bikes were stolen from farms in the county last year. So far, 14 quads have been stolen this year.

In an effort to prevent these types of machinery theft from farms, Dorset Police and NFU Mutual have issued the following advice to farmers:

NFU Mutual says thieves are targeting smaller vintage tractors due to recent improvements in tractor security in the latest models. But the kit inside tractors, such as satellite navigation equipment, is also a major target.

Are keys kept in a safe place? Consider a key safe with a key or coded entry. Bluetooth entry is also an option.
Remove all GPS guidance receivers, aerials or antenna globe when not in use. Consider fitting security tethers to devices to stop them being removed. Consider marking these with UV pen or engraving your postcode.
Record machinery serial numbers and photographs for reference – a picture of the stolen trailer or box will increase publicity prospects and recovery.
Put your postcode on the roof to make sure it is easily identifiable.
Machines fitted and registered with certain security markings are four times less likely to be stolen and six times more likely to be recovered if they are stolen.
Autoglass and NFU Mutual have partnered to offer a free security glass etching service. If you get a Vehicle Identification Number (VIN) etched on glass windows, it makes the vehicle more detectable and less appealing to thieves because they have to grind out the numbers. For more details and to arrange an appointment, email NFUM.Etching@autoglass.co.uk.
Consider fitting isolating systems to all farm vehicles, which will prevent theft such as fuel and battery isolators, and also fit immobilisers, VHF and GPS tracker devices. These methods have been proven to help recover vehicles that have been stolen.

Farmers often have no choice but to store trailers outside, but there are still precautions they can take to limit the risk of theft.

Ensure that any trailers or towable machinery have suitable locks, such as a towing eye lock which can be used on all types of ring hitch.
Livestock trailers should be security marked and secured using a wheel clamp, hitch lock. Consider using a security posts to secure or an appropriate ground anchor with strong high CEN-rated padlock and chain.
Trailers can also be secured by reversing up to a solid object such as a wall and then placing a bucket or other heavy implement over the hitch to prevent removal.
Fit an alarm – a simple battery-operated alarm will help deter the thieves.
Paint your postcode on the roof of horse boxes to enable police helicopters to spot it; chances are the thieves won’t know it’s there.

Fuel for tractors and all-terrain vehicles (ATVs) is an increasingly expensive resource and should therefore also be safely guarded.

Store fuel tanks within secure buildings or cages, keeping them locked and alarmed.
Install an anti-siphon device on vehicles.
Protect fuel tanks by equipping them with an alarm that will sound when fuel levels drop.

Farmers are being urged to report suspicious vehicles or people to police by calling 999 if the vehicle or occupants are seen committing crime, 101 in a non-emergency or via email 101@dorset.pnn.police.uk if a suspicious vehicle is seen.

Meanwhile, here are a number of appeals on Twitter seeking information for recent farm machinery thefts across the across the UK: