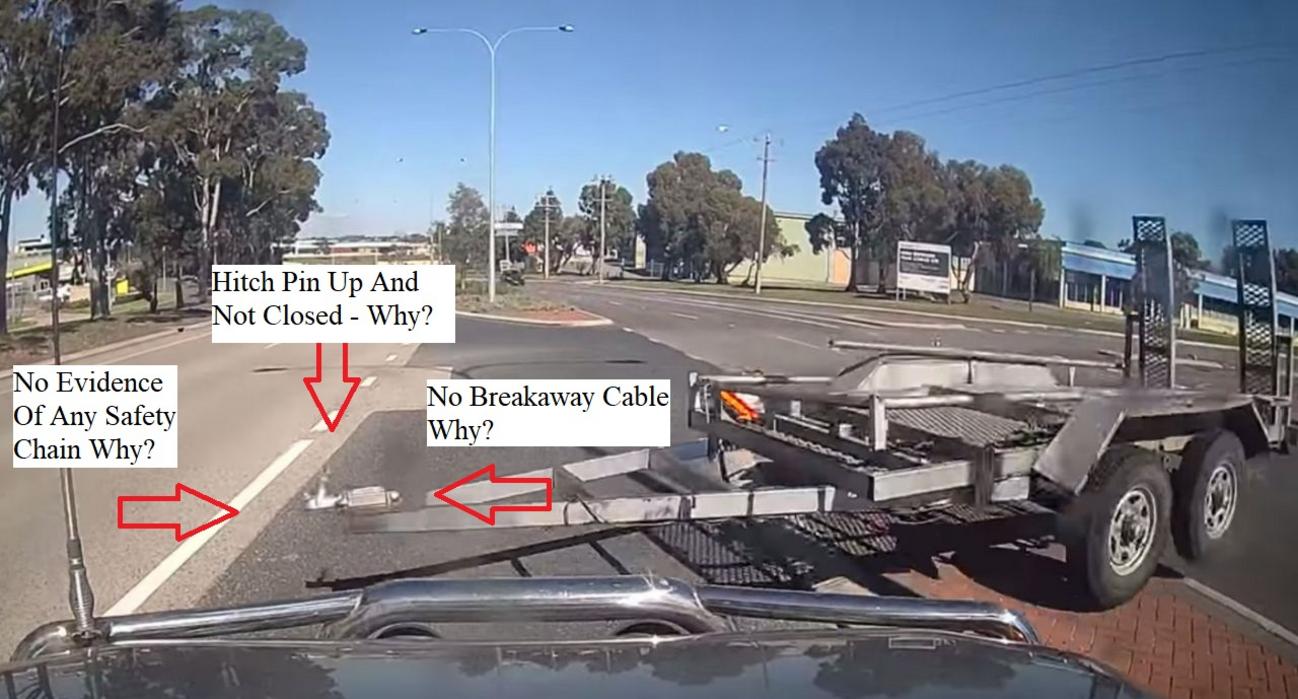 A runaway trailer has been captured only narrowly missing a collision with a vehicle after separating from the car it was being towed by.

Distressing footage filmed by the dashcam inside the car nearly clipped by the rogue trailer, showed it flying through an intersection in Wangara, north of Perth.

The dramatic incident unfolded on Hartman Drive on Wednesday just after 1pm, with the approaching vehicle shown stopping just in time to avoid being struck.

A driver inside the vehicle could be heard bracing for the worst before releasing into a chuckle after realising the crisis had been averted.

A dashcam video has captured the moment a trailer came skidding across a busy road. Source: Dash Cam Owners Australia

Many people said the incident could have been easily avoided had the trailer owner used a safety chain to connect it to their car.

“Did not expect that. To the guy whose job it was to put the safety chain on, we all think you need a new career,” someone wrote in a comment.

“It's not that hard to put a trailer on properly you just work to a routine and stick to it and double check,” another person said.

Many praised the responsible driver who fortunately had already begun braking off the 70km/h road into the normally-busy intersection.

“Dashcam driver could have continued and been hit then had their insurance company fix or write-off his car, but no, he avoids the accident then continues his business,” one social media user wrote.

In Western Australia, incorrectly securing a trailer is an illegal offence and can attract fines between a $150 and $5000, according to the Road Safety Commission and Transafe WA.

Do you have a story tip? Email: newsroomau@yahoonews.com.

Its Terrifying How Many People in the United States are trying to shut us up and destroy our life saving cause.

Since 1975 Over 28,000 dead men, women and children when we include hayrides, parades floats and all victims who die after 30 days of the initial accident.  Note the government will not count these deaths by a Passenger Vehicle That Is towing a trailer.

We never forget all victims

6 States have no safety chain law

14 States have no registrations for trailers