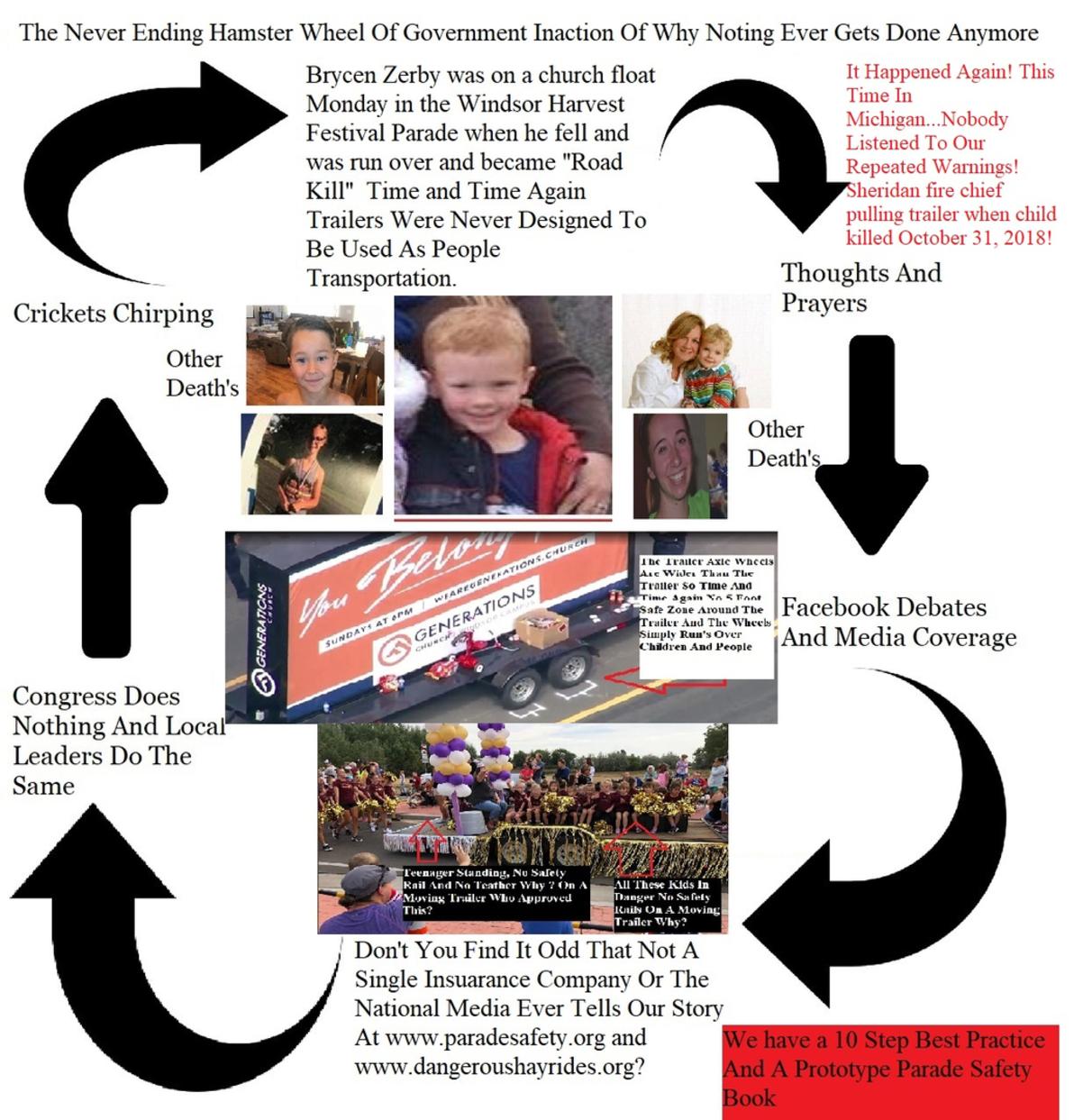 Click Here To See The Report That Everyone Has Ignored Why?
We Tried And Yes A 200 Dollars......Two Hundred Dollars Would have prevented this death.....The Farmers Keep
Fighting our recommendations Why?
Read This Fire Marshall Report From Maine That Killed A Teenager And Injured over 20 ...One Dead Teenager
Over 20 Million dollars In Medical Bills and nobody has done anything to prevent the same
From Happening Over , Over, Over , Over, Over And Over Again

The Maine Fire Marshal's Office says there's little the state can do to improve the safety of hayrides.

The group agreed to create a list of safety recommendations for those who wish to conduct hayride amusement rides. There are between 250 to 400 motorized farm rides in Maine each year.

SHERIDAN, Mich. (WOOD) — A small community is mourning the loss of an 8-year-old boy who was killed while trick-or-treating.

Sheridan is a typical tiny town in Montcalm County, north of Ionia on M-66. At 7:20 p.m. Wednesday, the streets were filled with kids and their parents going door-to-door getting candy. Many local folks use their lawn and small farm tractors to haul kids and tired parents through the streets.

Michigan State Police say 8-year-old Brady James Sexton from nearby Sidney, whose mother is a teacher in town, was on a flatbed trailer hauled by one such tractor when he either slipped or was pulled off when his clothing or costume became entangled in the wheels.

“My understanding was (the father was) walking alongside … the mother was on the wagon. Just makes the whole situation a lot harder,” Sheridan Village Superintendent Doug Lane told 24 Hour News 8 Thursday.

Brady was run over by the trailer wheels. He was later pronounced dead at Sheridan Community Hospital.

“They were walking faster than the wagon was going. There was no evidence of irresponsibility. Everybody was there for the kids, so there was great care being given to the kids and their safety," said Philip VanDop, a pastor, firefighter and the chaplain for the local fire department.

The trailer was owned by Lane and the tractor was being driven by his ex-son-in-law, Ed Lingeman, who serves as the village fire chief and assistant superintendent.

“He is absolutely devastated," Lane said. "I talked to him this morning and he’s terribly shook up. He loves children."

Saying the incident was still under investigation, MSP did say there is no indication that speed or alcohol played any role.

“Because it was Halloween, lots of kids, lots of families and everything else out there, I knew I was going to have to assess the situation and deal with the people where they were,” VanDop said.

VanDop said the tragedy rippled quickly in the tight-knight community.

“Parents wondering where their kids were, nobody could get a clear picture because it was dark and all of a sudden, Halloween was pretty scary,” VanDop said.

When asked whether the death would cause people to rethink using small tractors to take trick-or-treaters through the neighborhood, VanDop said he thought not.

“I would think that what it will do is make everyone much more aware that these things can happen. You go year after year and nothing happens, I don’t want to say people get lax, but it gets hard to believe that something like this can happen,” he said.

His sentiment was echoed by the village superintendent.

“I think no matter what we do in life, my feeling is we’re not going to prevent bad things from happening to good people,” Lane said.

People in Sheridan have started coming together to support the family of the boy killed, scheduling meals and helping where they can.

A Fire Chief Just Killed  A Child And We reserve the right to call for his dismissal  because we have been warning about this critical issue for over 12 years and he ignored the NTSB warnings and guidance.

Here Is A Summary Of My Recomendations To The NTSB...Where is the Disconnect?


An 8-year-old boy lost his life this summer when a Fourth of July parade float driven by his father ran him over in Edmond, Okla., during the city’s annual LibertyFest event. Later that evening, a 7-year-old boy died after suffering injuries in a similar parade float accident in Annapolis, Md. Yet another fatality occurred that day in Bangor, Maine, when a fire truck in a parade hit a man driving an antique farm tractor.