NOTE:  It is these FARMERS who lobby against us to not have a MOT in the United Kingdom And The United States Because Doing So Would Cost The Family Farm!

The container became uncoupled from a tractor as it travelled along Howards Lane in Mossley, Tameside, on Bank Holiday Monday

NOTE:.....Duhhhhhhhhh!!! Why did it come uncoupled?  Because we are towing with defective  towing systems and the idiot FARMER did not use safety chains....use a hitch pin....and did not have a secondary breaking system for the trailer because he is a cheap and selfish farmer who does not care about safety of others.....end of story.

A runaway trailer plunged through railings and down an embankment before crashing to a halt outside a school.

The container became uncoupled from a tractor as it travelled along Howards Lane in Mossley, Tameside, on Bank Holiday Monday.

Firefighters said it was ‘really fortunate’ that pupils were still on their summer break at the time of the accident.

The collision damaged a street light and some lighting bollards on the steps of Mossley Hollins High School, and also left live electric cables exposed. The high school will open to pupils on Wednesday as planned, its website said.

Crew Manager Simon Wheeldon said: “It was really fortunate it was a bank holiday and not a school day, otherwise there may have been more children around. There were 30 large bales on the trailer, fortunately they were secured well but it narrowly missed a car as it came across the road.”

Greater Manchester Fire and Rescue Service and Electricity North West were called to Howards Lane at around 4.50pm.

They worked together to make the scene safe.

A spokesperson for Electricity North West, said: “We were notified by Greater Manchester Fire Service of an incident in Mossley, Ashton-under-Lyne, which caused damage to a street light and lighting bollards. Our engineers attended to ensure the power supply to local customers was not affected and to make sure the area was made safe.”

GMP Traffic officers tweeted an image of the stranded trailer with the message: “Tractor lost its trailer, which rolled down the embankment, on Monday pm. No injuries. Just a roll in the hay!”

A message posted on Mossley Hollins High School website on Monday evening said: “There has been an accident involving a tractor, just outside of school today. Nobody was hurt during this accident, however, parts of the school grounds have been affected.

“Site staff are working hard to make the necessary repairs. School will be open tomorrow (Tuesday) for staff training and will be open as planned on Wednesday for students.”

Do you see the loose Flying Trailer?  I do...only the Idiots in political public safety thinks that this is a bird sitting on hay.

We reserve the right now to call each of our POLITICAL leaders in the United States, Canada and England PURE Idiots for their total ignorance of FLYING TRAILERS.  Over 12 Years Of Research! Totally ignored by All GOVERNMENT POLITICAL  SAFETY LEADERS in all countries are killing ordinary citizens and they don't care.  One Day When Someone important gets killed by a flying trailer suddenly will make them understand. 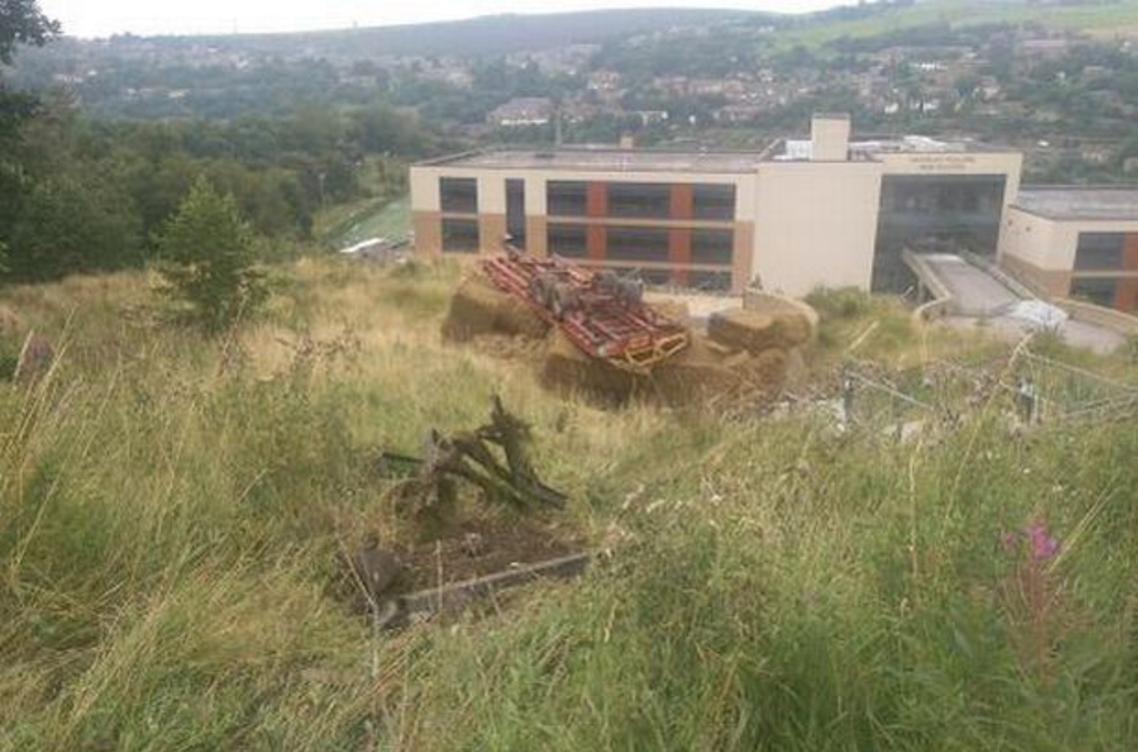