Click Here For The Funeral Video  We Know How
To Save Lives!  Why Do So Few  Believe Us?

Rally For Memory Of Charlie Meador And Each And Every American Who Is Subjected To Defective Towing And South Carolina Dangerous Trailers!

On Friday August 13, 2010 Charlie Meador (22) was killed by a runaway out-of-control, flying utility trailer. He was traveling to the University of South Carolina for his fourth year of college. Instead, the son of a Waccamaw Elementary School art teacher, died in a three-car crash on U.S. 521 outside Salters, South Carolina. He was pronounced dead at the scene after his 1996 Toyota collided head-on with a trailer that had broken loose from a 1995 Toyota that had been towing it, Williamsburg County Deputy Coroner Vernal Fulton said.

The trailer, which was being towed by David Brown, 60, of Manning, South Carolina crossed the center line at about 4:40 p.m., according to South Carolina Highway Patrol Lance Cpl. Sonny Collins.

Nobody was able to heroically rescue Mr. Meador because he was already gone.

In 2002 Secretary of Transportation Norman Minetta signed a letter stating that from 1992 to 2000 an "increase of over 36% involved Passenger cars that tow trailers."

To date our local government in Henrico County, Virginia, has eight states that do not have safety chain laws and there are over twelve states that do not require registrations. It seems that even our Federal Government has tried to prevent us from saving lives.

To date NHTSA has never done a “Crash Test” or a Safety Study on construction and quality of all utility trailers.

Secretary LaHood, Administrator Strickland, Governor Nikki Haley, and every Governor in the United States of America PLEASE stop stonewalling and address the safety of Utility Trailers.

Going forward, each and every death that occurs from LOOSE FLYING trailers should be addressed and questions need to be asked as to WHY there is no action?  Our elected safety officials need to be held accountable for each and every PREVENTABLE DEATH like
Charles Philip Meador. 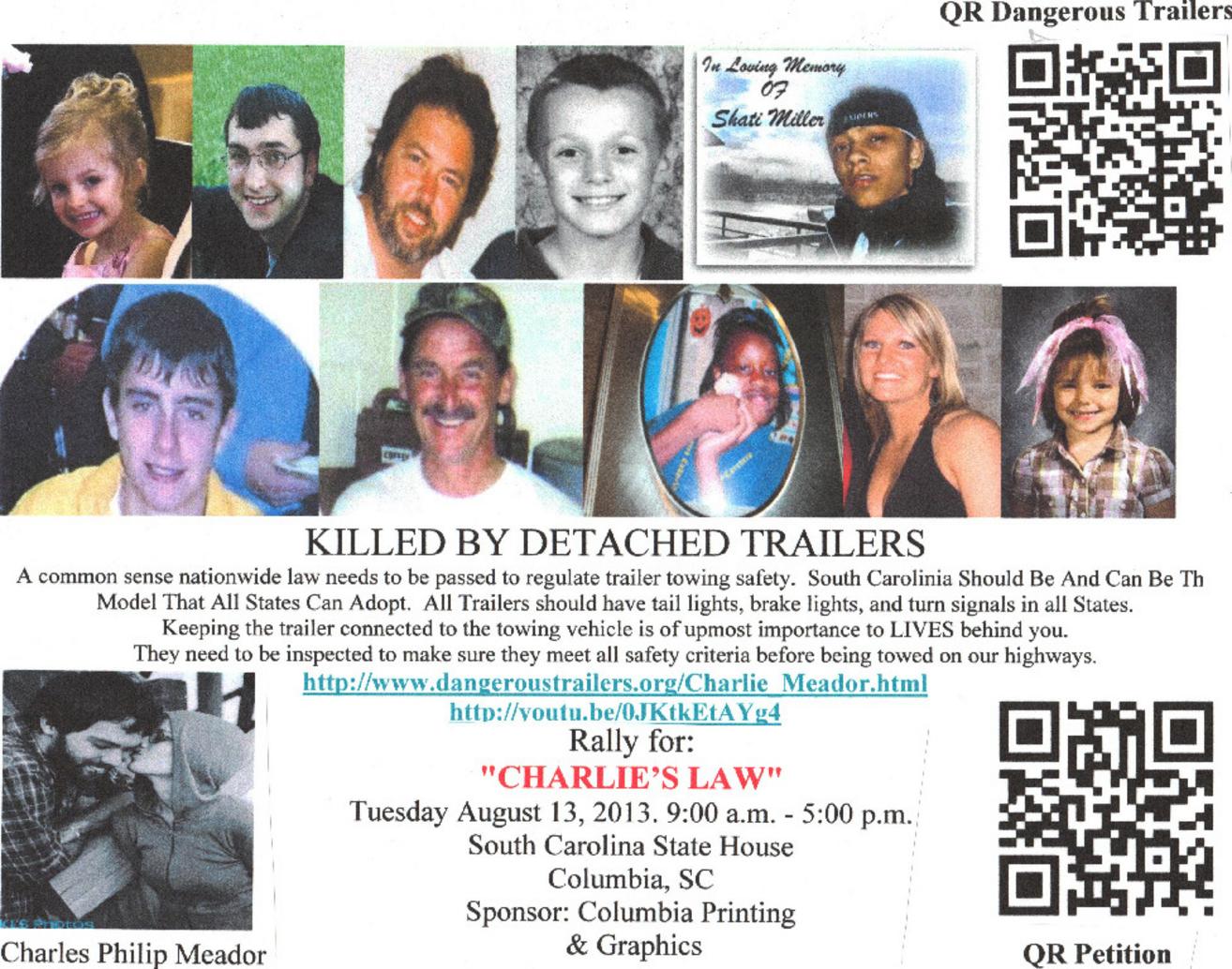