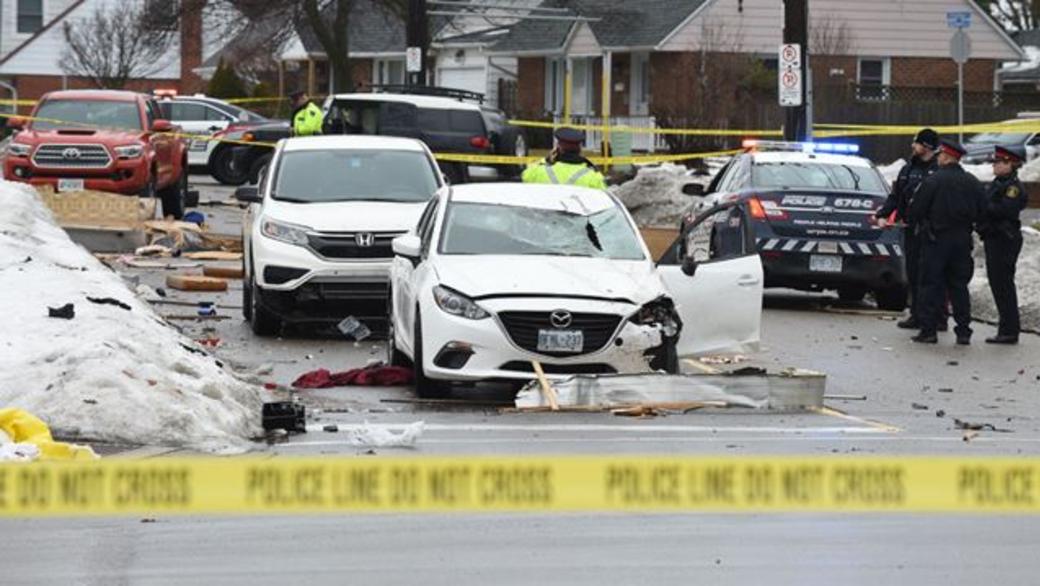 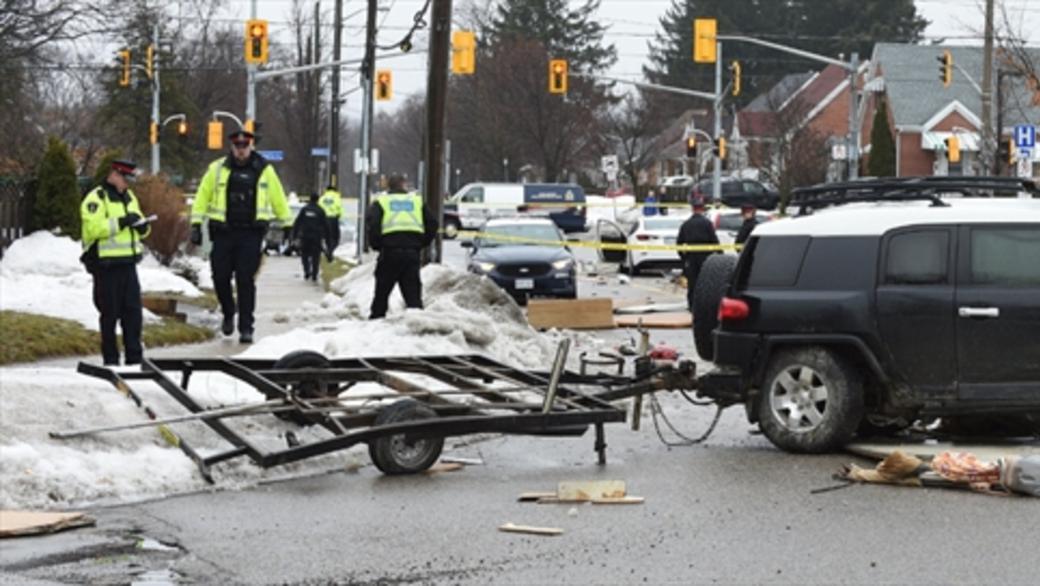 See the homemade crappy trailer?  Who approved this crap?  look at the safety chains,,,,look at the tires and the poorly constructed crap.  Would you buy a baby car seat that was never tested or certified?

KITCHENER — An attempt by a Waterloo Regional Police officer to stop a speeding sport utility vehicle pulling a trailer on Belmont Avenue West on Wednesday morning led to a six-vehicle crash, injuries to three people and a driver on the loose.

The incident began just before 11 a.m. when an officer started following a Toyota FJ Cruiser with an attached trailer in the area of Belmont Avenue West.

The attempt to stop the Toyota led to the crash involving five other vehicles, including three cars, an SUV and a pickup truck, said SIU investigator Carm Piro.

The driver failed to stop and fled the area on foot.

One car was severely damaged after hitting a light post at the intersection of Belmont and Queen's Boulevard.

A pedestrian at the intersection of Belmont and Queen's was hit in the collision and transported to Grand River Hospital.

Haffner said police notified the SIU because of the extent of the injuries.

"We determined the pedestrian involved may have had serious injuries," he said.

The pedestrian was later transferred to a Hamilton hospital with serious injuries, but they are not life threatening, Piro said.

The SIU is a civilian agency, independent of the police, that investigates incidents involving police and civilians where there has been a death, serious injury or allegations of sexual assault.

The suspect was still on the loose as of early Wednesday evening, said Haffner. He is described as white, about 40, with a short, stocky build.

"Officers are in the area are searching for the suspect," Haffner said. Police are also looking elsewhere in the region for the driver.

Police were in the area of Weber Street and Fergus Avenue later in the afternoon because of reports that the suspect might be there, but it was not him.

The area on Belmont Avenue between Spadina Avenue and Queen's Boulevard was taped off most of the day while SIU investigators examined the vehicles and the debris, including wood pieces and cushions, that were strewn the road.

"We have eight witnesses that we are interviewing right now," said Piro at the crash site.

Piro said it will take a few months before the agency's investigation is completed and results are reached.

In addition to the Waterloo Regional Police command post vehicle, the SIU had a command post and another truck at the scene. An empty Grand River Transit bus was in the area so witnesses could keep warm.

A Belmont Avenue resident said he didn't see the crash, but saw the commotion when he stepped out of his house to check his mail.

"I thought, what the heck happened out here," said Ron Biggs, who stood with other neighbours looking at damaged vehicles steps from his home.

"It looked like a disaster zone. It was really scary what happened," said Biggs, who's lived in the neighbourhood for 50 years.

"It's a well-travelled street and people drive too fast here," he said.

Two nearby public schools, J.F. Carmichael Public School and Queensmount Senior Public School, were put under a hold-and-secure for a short time, but that was lifted by early afternoon.