A young girl was seriously injured on Thursday morning in Miami Springs, forcing the city to cancel its annual Fourth of July parade.

“An 11-year old child slipped and fell and was hit by a trailer,” said Miami Springs Police Chief Armando Guzman.

The accident occurred at 11 a.m. near Curtiss Pkwy. and Pinecrest Ave. as the parade headed toward the golf course.

Laramie Police Department Sgt. Robert Austin, center, and officer Ethan Greenawalt talk with Emmett Holmes in the hospital after the child was injured in the Laramie Jubilee Days Parade last weekend. Holmes’ family praised Austin and Greenawalt for going above and beyond the call of duty.Photo courtesy of Darla Schermerhorn

Five-year-old Emmett Holmes was just told he needed some blood drawn by the nurses in the hospital, and he was scared.

The boy had just been run over by the Laramie Jubilee Days Parade float he was on, having been accidentally kicked off his spot sitting on the trailer’s wheel-well during last week’s parade.

Not wanting the child to suffer any additional trauma from the accident, Laramie Police Department Sgt. Robert Austin tried to tell him he didn’t need to be afraid of the needle.

So, Austin got his blood drawn to prove to Holmes it wasn’t so bad. Darla Schermerhorn, Holmes’ grandmother, said she was amazed at the sergeant for doing that.

“That made the world of difference in getting the blood drawn,” she said. “Everybody was just teary-eyed. We were all looking at each other like, ‘I can’t believe he just did that for Emmett, for that little boy.’”

Emmett’s mother, Kayleigh Holmes, also said Austin went “above and beyond” staying with the 5-year-old until all the various test results were in and the sergeant was sure he would be okay.

Schermerhorn noted the officer could’ve just left after getting the necessary statements, but he stayed for bloodwork, an X-ray and other tests.

Immediately following the accident during the parade, bystanders alerted LPD, and officer Ethan Greenawalt responded to the scene to rush Emmett to the hospital. Trying to juggle collecting statements from those at the scene and providing emotional support for the family, Austin drove to the hospital to see if Greenawalt needed assistance.

“Given what had just happened and what we were investigating, I just wanted to try to calm (Emmett) down and reassure him a little bit,” Austin said. “(Greenawalt) was pretty busy with trying to track everything down and get all the statements, so he was kind of forced to leave the room.”

Schermerhorn and Kayleigh Holmes both remember feeling terrified during all the testing, wondering how badly he was injured.

“I was scared — at first I didn’t know what even happened to my child,” Kayleigh Holmes said. “I didn’t know if he was alright.”

Neither of them were at the parade when the accident occurred, something Schermerhorn said was almost a relief.

“I know one person that actually saw it and how horrific it was and how shook up he is from seeing it,” Schermerhorn said. “I’m glad I didn’t … it’s traumatizing enough just thinking about what he went through when we weren’t there.”

Luckily, Emmett didn’t break any bones or have any major lacerations.

“He is walking and playing and having a good ole time,” Kayleigh Holmes said Friday. “Thank goodness nothing too terrible happened, nothing was broken.”

The Jubilee Days Parade website and application encourages children to be on floats but doesn’t mention any safety requirements for the floats. In a written statement, the Jubilee Days Board of Directors said it’s “saddened to learn of the injury that happened during last weekend’s parade.”

“Safety is of upmost concern to the Board,” the statement reads. “Our thoughts are with (Emmett) and his family during the healing process. The Board is looking into the incident in order to determine exactly what happened.”

Austin said accidents like this one are “super rare,” noting it was the first time in his long tenure as a local police officer where “we’ve actually had something happen in the parade.”

Schermerhorn said she’d still like some action to prevent another accident in future parades.

“If there are no guidelines for children to be on floats, there needs to be,” she said. “Accidents happen, but it could’ve been a little bit safer.”

While also not happy with what happened, Kayleigh Holmes said the officers and nurses helped more than she can say.

“I never expected that kind of kindness from anybody, let alone somebody I didn’t know,” she said. “If (Austin) wasn’t there, I don’t know how we would’ve dealt with that situation.” 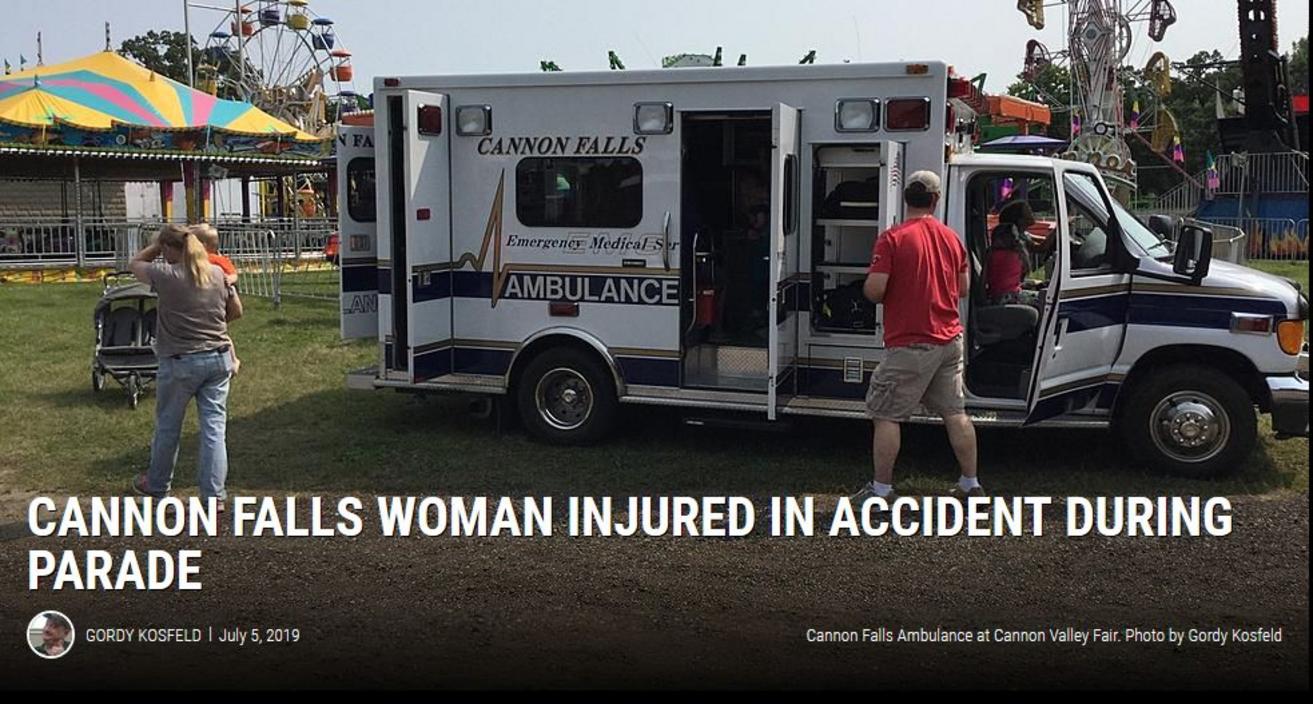 Two eyewitness accounts given to KDHL indicated Stolper was throwing candy from the float when she lost her balance and fell off the side.

We contacted the Cannon Falls Police Department but were unable to get an official police report of the accident.

Mayor John Althoff works with the parade and told KDHL he and another volunteer noticed the units had been stopped for a significant period of time so they hopped on an ATV and drove down the route to see what had happened.

The parade is staged in the Cannon Falls High School parking lot and Althoff said about halfway down the route is when they came upon the mishap.  They did continue the parade after the delay. 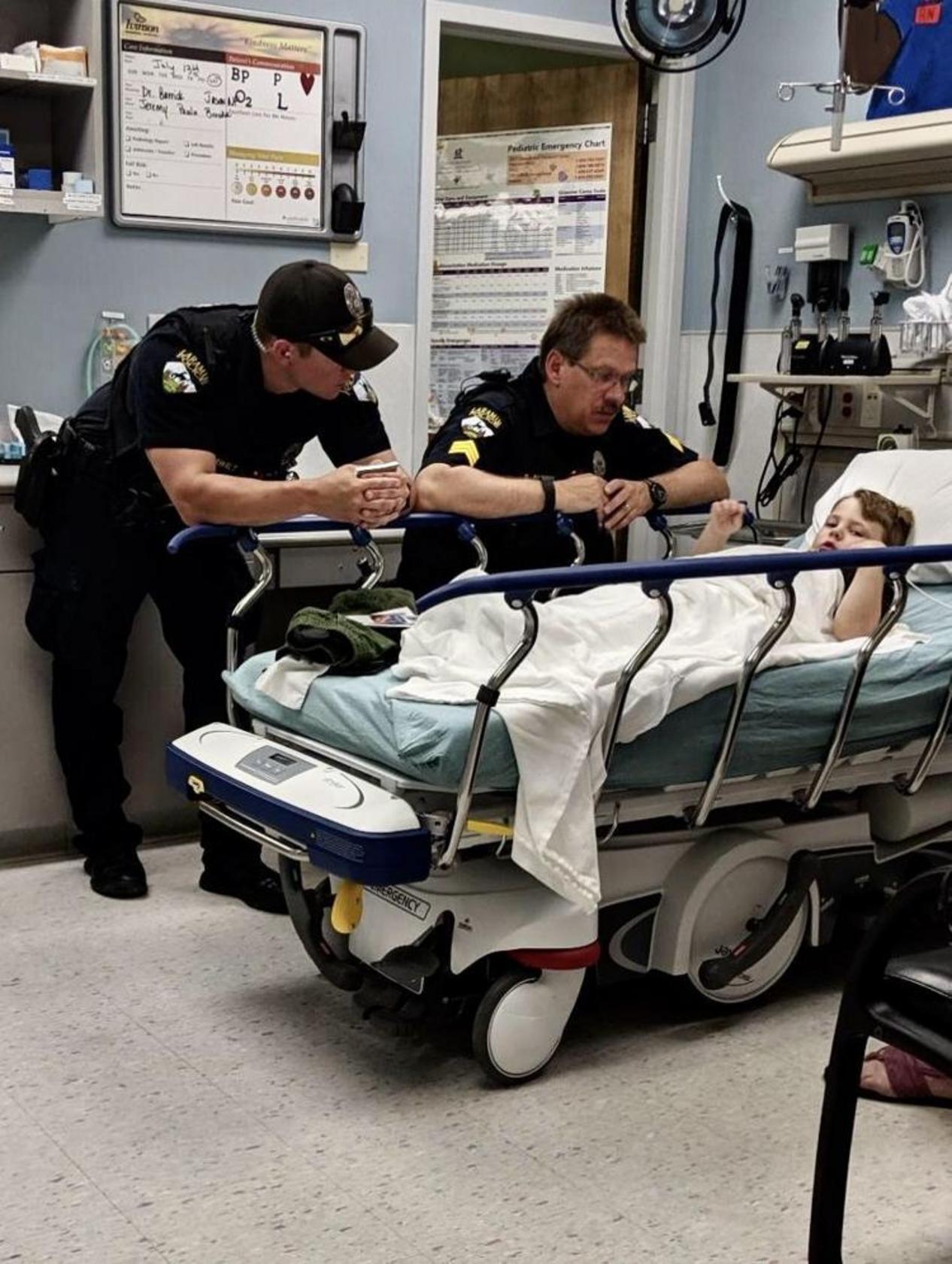 The Cannon Valley Fair Parade in Cannon Falls was delayed for about 30 minutes Thursday as paramedics were treating a woman injured after falling from a float at about the halfway mark of the parade.

Laura Stolper, 66, of Cannon Falls was on the Cannon Valley Senior Center float when she lost her balance and fell to the ground.  Stolper was then run over by the back trailer wheels according to eyewitness accounts.  She was transported to Rochester by ambulance.

The Facts Are Very Clear "A Utility Trailer In The Manuel States Not To Be Used For People Period"  So every trailer used in a sponsored parade is in violation of the law.

Our Web Site At www.paradesafety.org has been trying to sound the alarm that nobody wants to join with us in joining all interested parties into a week long discussion and come up with a "National Parade Safety" Standard!  Why?  we are willing to help save lives and prevent injuries.  Note We do not know if this child survived, they will not answer our questions: