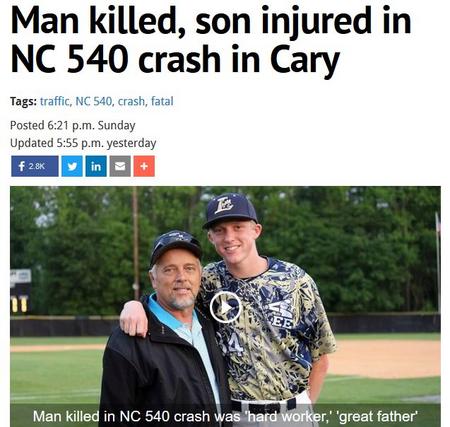 Cary, N.C. — A man was killed and his son was hurt Sunday afternoon in a crash on N.C. Highway 540 in Cary.

Terry Allan North, 54, of Sanford, was northbound with his son in a white Nissan pickup towing a white trailer when the trailer came loose, according to the State Highway Patrol. Troopers said the men stopped their truck in the middle lane of the highway and got out to try to retrieve the trailer.

North was between the trailer and the truck when a Jeep came up from behind and was unable to stop, slamming into the trailer, according to the Highway Patrol.

Troopers said they did not expect to charge the driver of the Jeep. They did not release that man's name but said he had minor injuries and was taken to a hospital by his daughter, who was a passenger in his vehicle.

Trey North, 21, was taken to Duke University Hospital, where he was being treated for non-life-threatening injuries. Relatives said he was recuperating at his mother's home in Sanford on Monday.

"Terry was a very hard worker and a very good friend, a very good father," said David Wicker, his boss at Central Moving and Storage in Sanford. "I would like everyone to remember Terry as a great father."

"My two sons gave me another state title. Thanks sons, y'all are the best!!!!" reads another.

erri Price, Trey North's grandmother, said the father and son were helping the sister of Trey's girlfriend move at the time of the crash.

"He loved those boys. They were his whole life," said Janet Chilton, who was Terry North's landlady.

"The community has lost a great man," Wicker said.

The toll road was closed in both directions for about two hours, and drivers headed north on N.C. 540 were detoured to U.S. Highway 64 and N.C. Highway 55 while troopers investigated the crash.

Why did the hitch fail?  Why we have questions