The Victim Advocate said the ADA
wanted photos. Told her that I gave them to the Sherrif. Said the Sheriff did not provide them. I told her that the YCSO email
system kicked them back to me. Which the Major implied "might happen".

So, I hand delivered them a dozen shots
the Monday after thanksgiving.

Still, they never got them to the ADA.

I will hand deliver them, again, in the morning to the Sheriff because the ADA wants to maintain arm's length protocol.

By the way, the YCSO still have not determined the owner of the trailer.
How hard can it be to run a plate?!

Even though it has not been registered in nine years!

You would think they would at least be just a little curious!

Where is Columbo when you need him?

Lawyer has officially notified boat owners as well. Thanks Ron!!!
Massive .... Against the Insurance Company
Update
He does have a commercial policy at
$1,000,000.
And the Carrier has accepted total fault.
Just notified the owners of the boat.
Will see how they respond.


How much longer can they ignore us www.dangeroustrailers.org
A lawyer sent me this years ago.   Travelers insurance company knows I have this and they told me they are going to sue me if publish it ....
This is for you. it's back on line let them sue me
http://www.old.dangeroustrailers.org/uploads/study_utility_trailer_accident.pdf

Read it understand the number one loss is people who tow trailers.
Sent from my iPhone
You must find out who the insurance agent is.   They have a 1,000,000 E AND O COVERAGE
the insurance agents never ask it they tow..... They never underwrite the  d.      Z  policy correctly,  but in my case I had a hole in the back yard the inspector told me to fill it because the dog dug the hole before I could bind coverage.
Go after the insurance company and agent you have 1,000,000
I can expose the insurance company
YCSO still does not say or know who owns it.
Our atty is also going after the owners of the boat.
The driver was hired by them to transport it and winterize it at his shop.


Tim need your letter writing skills on this one I am way to pissed off ...
Just received this now do you understand the massive cover up of the details of these loose trailer accidents?
Why is the government suppressing these accidents and trying to destroy our cause..... But hey if we have defective air bags that impacts about 10 lives but complete and utter silence on over 24,500 dead since 1975

2. Derelict and rusted through bumper on pickup.

4. No restraining straps on boat to trailer.

5. No operating brake lights on trailer

10. Claims to be a professional.

12. Deputy Sheriff stated at scene that " he will be criminally charged and face a Judge".

13. Informed later that he will just get 2 minor traffic tickets!!!!!!

Wife was and is still injured.....

If her instantaneous driving reactions had failed her she would have been decapitated and crushed to death.

He would be facing Manslaughter charges.
Then again, maybe not the way things have unfolded here. 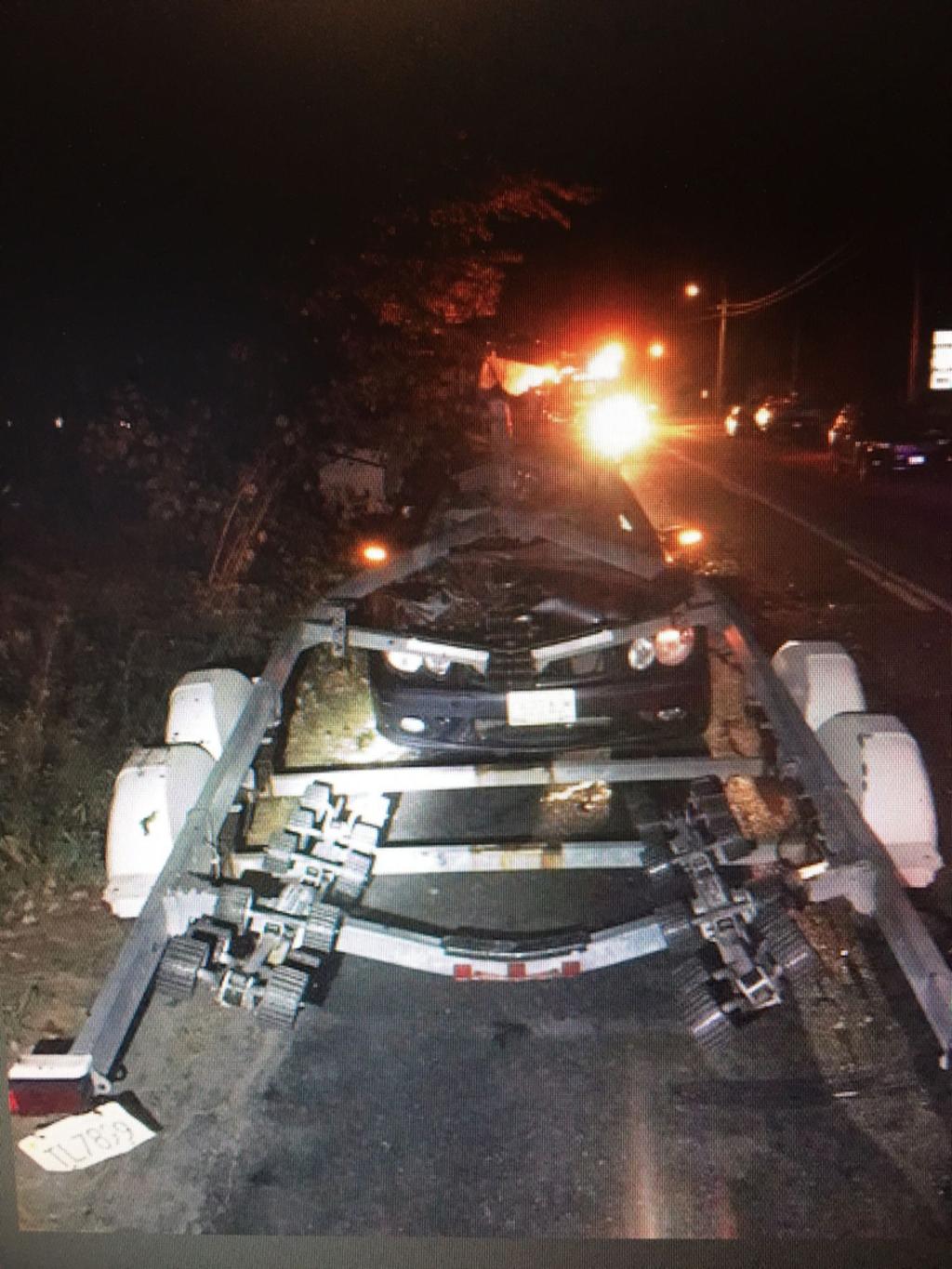 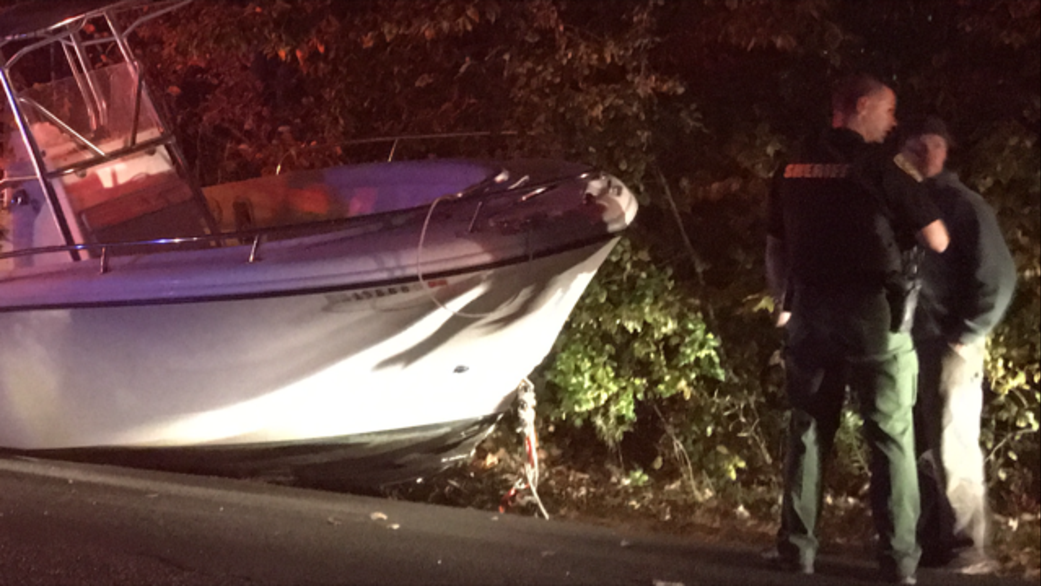 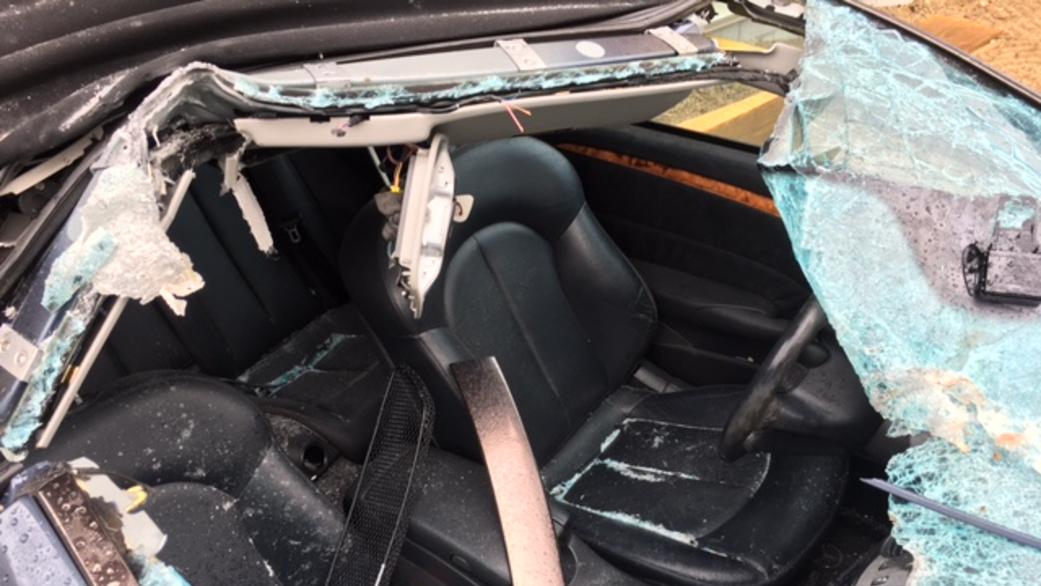 Now Here Is Even More The Pure Bull Poop This True American Is Undertaking To Get Justice Is Mindblowing. 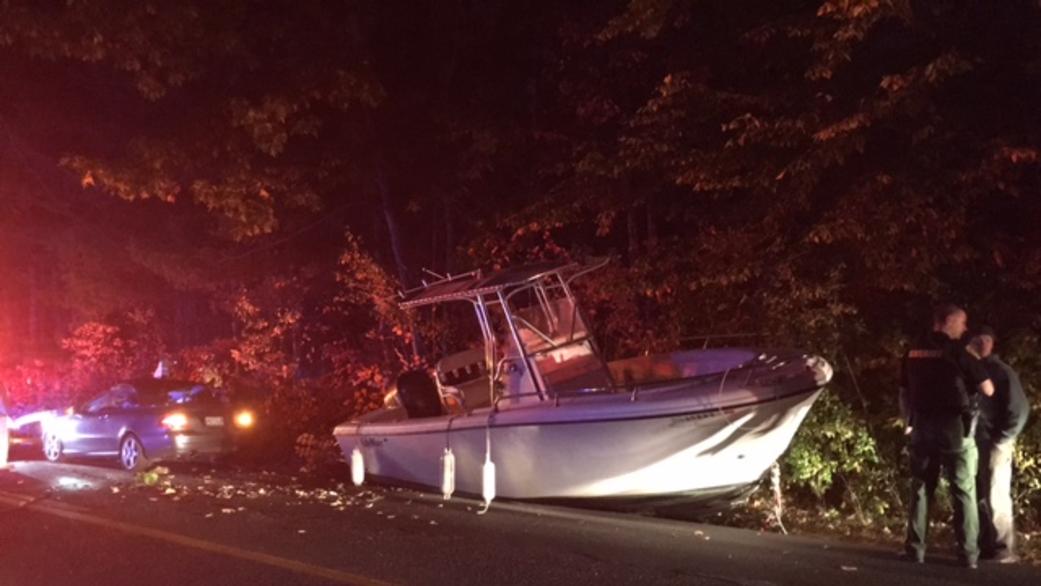 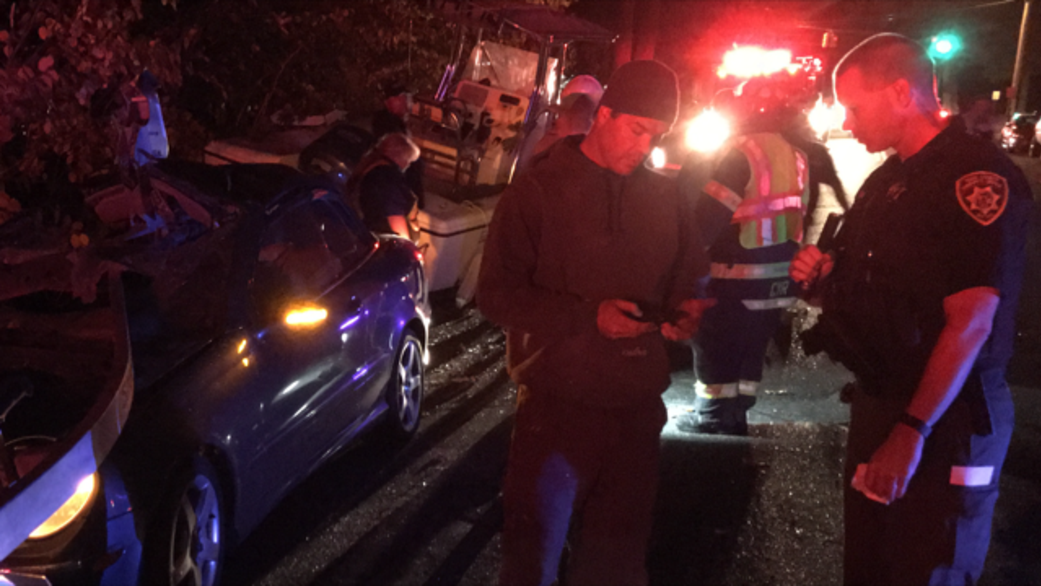 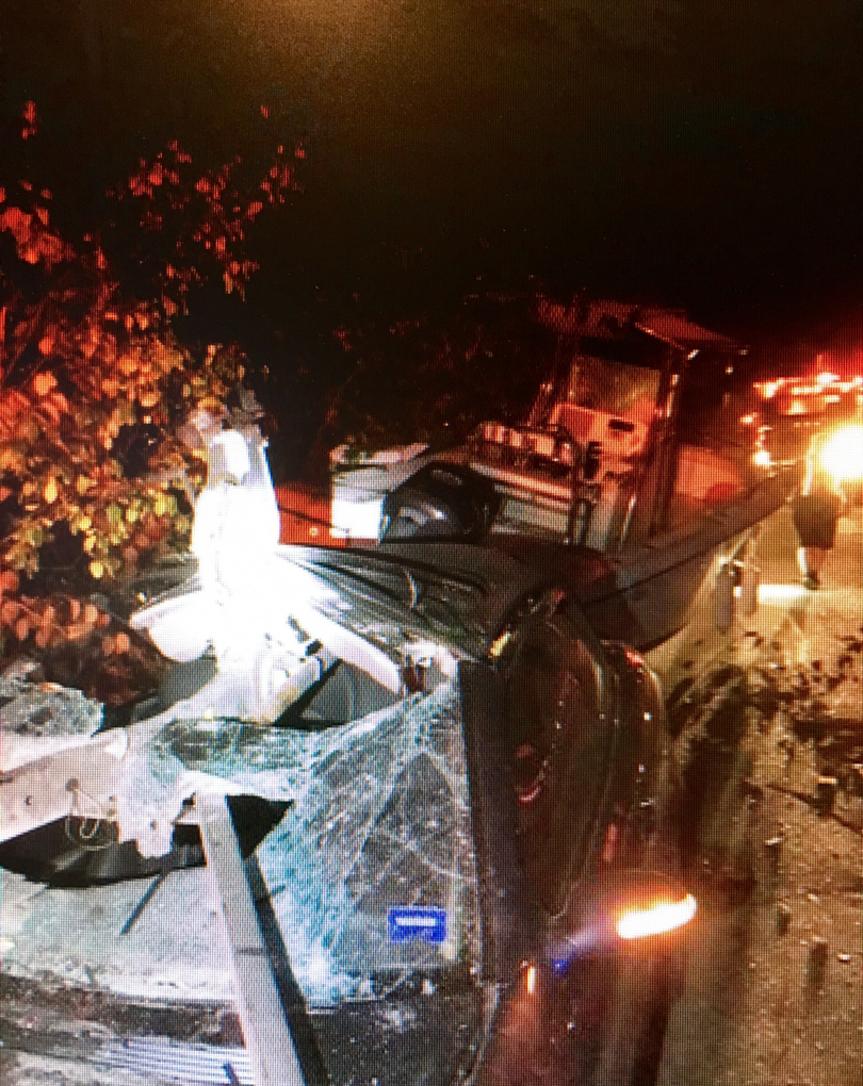 Stolen Tag On Trailer That Was Not Registered For 7 Years 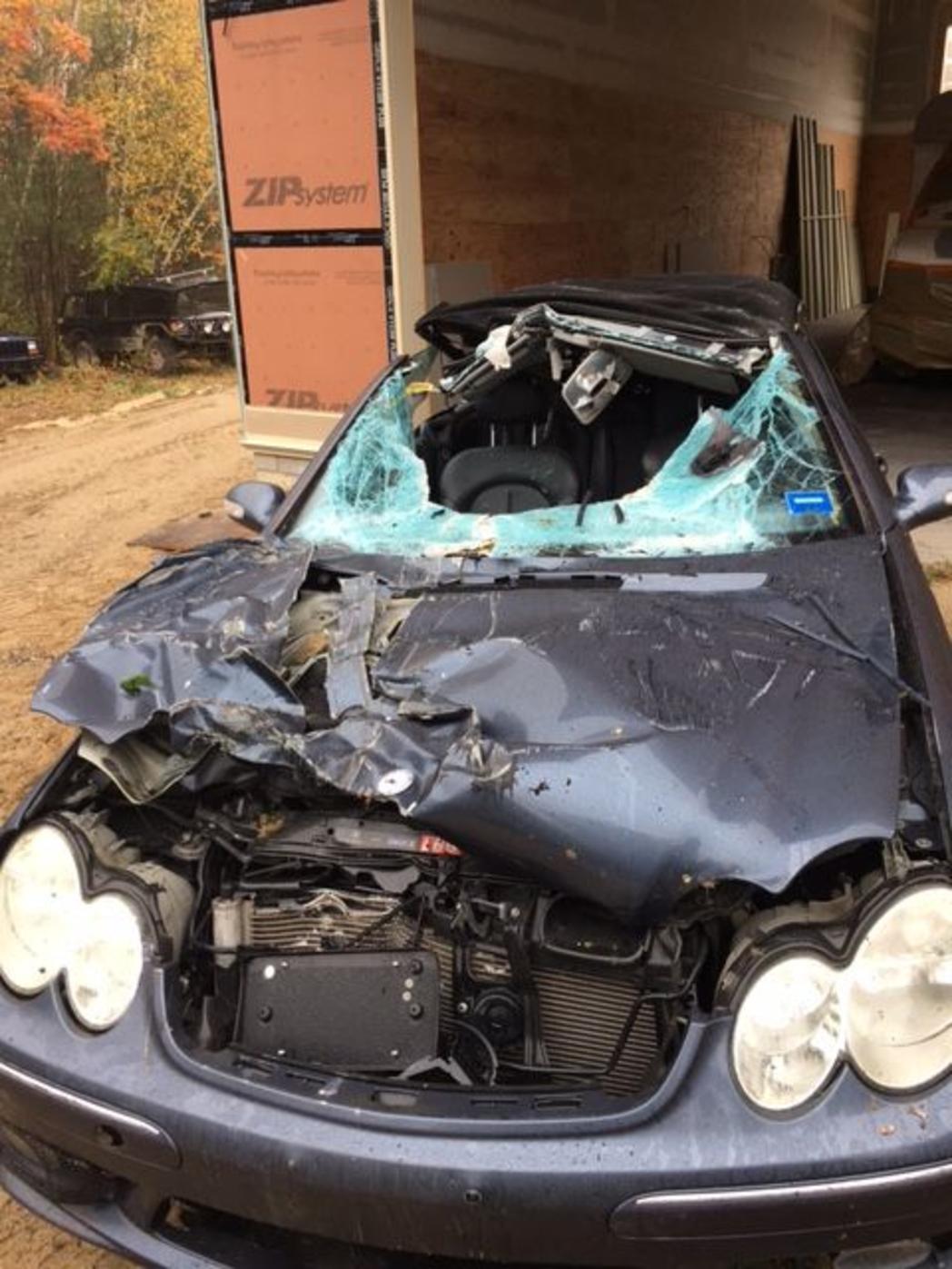 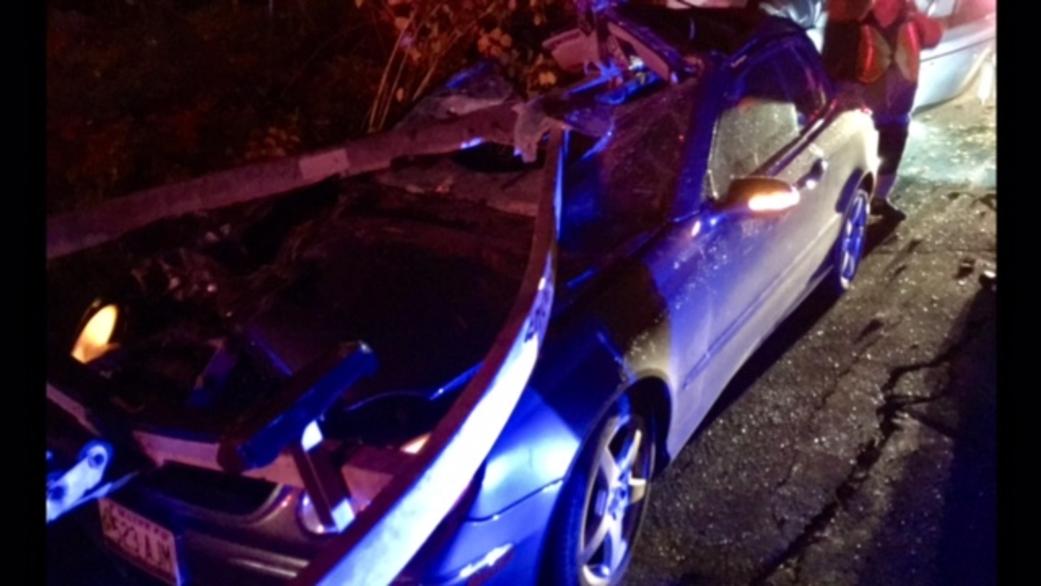 Here Are The Pictures They Keep Loosing 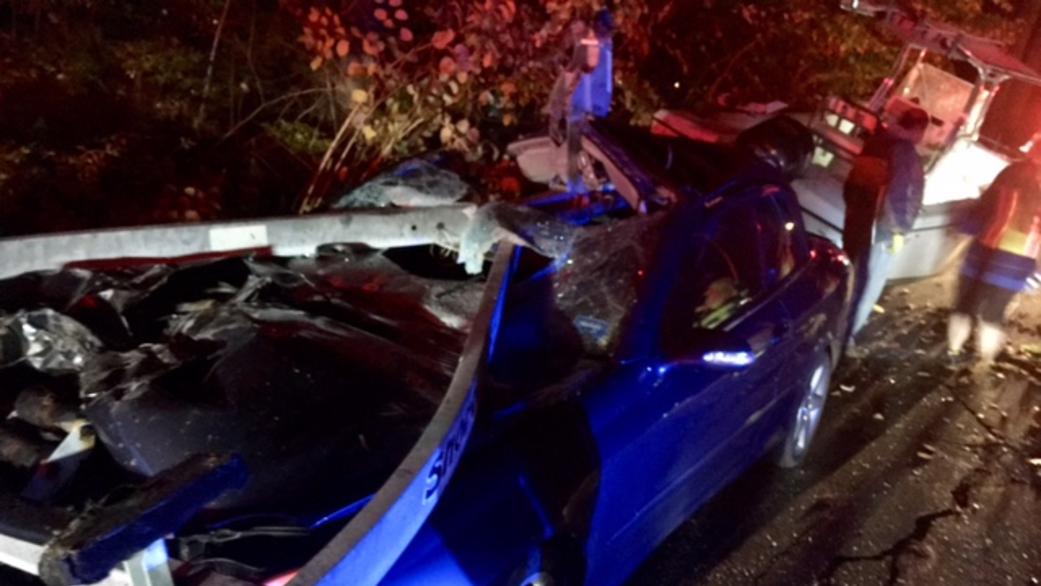 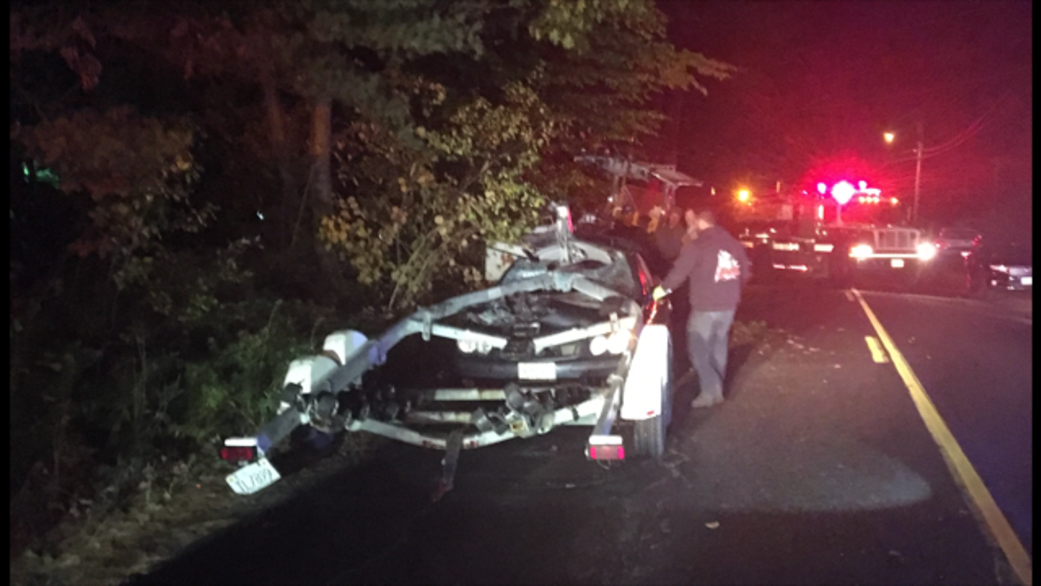 with any luck!!!
the RM squeaky wheel /bully pulpit in full effect!!!
thank you Ron.

No one is hurt in the Log Cabin Road incident.By Beth Quimby Staff Writer

A Kennebunkport woman escaped injury when a boat and trailer crashed head-on into her convertible at about 6 p.m. Saturday in Arundel.

The York County Sheriff’s Office said Bryan Raymond, 42, of Kennebunkport, was hauling a 25-foot boat and trailer with his 1996 Dodge Ram 2500 pickup truck north on Log Cabin Road toward Route 1 when the boat and trailer dislodged from the truck as he slowed for the traffic light at Route 1.

The boat and trailer crossed into the southbound lane and hit a 2005 Mercedes CLK convertible head-on. The convertible was driven by Amy Graynor, 54, of Kennebunkport.

The crash caused extensive damage but no one was hurt, police said.

Log Cabin Road was shut down for 45 minutes while the accident was cleared.

Police are investigating the incident.

The following is going to chronicle a loose boat trailer accident.  The person who contacted us on his free will has documented and addressed what happened.  So many others have not been as diligent.   We are going to post the pictures...and the article's and the blatant disreguard for any good police work to address the many violations of the trailer that resulted in a very serious injury.  Up until this point so many others have questioned our findings that almost every police department and district attorney's completly ignore the accidents caused by Passenger Cars That Tow Trailers.

We Ask Do We Have "Keystone" Cops?

Do The Cops Even Know That Since 1975 24 Cops Have Been Killed By Loose And Defective Towing Trailers?  Along With Over 24,509 And Counting Ordinary Men, Women And Children

Now Here Is The The First Contact From The Victim...One True American

Name.  Boat trailer
Bill Redacted
Email REDACTED
Subject
Boat hits car. Arundel Maine 10-20-16
Message
Saw that you posted this on Facebook. That was my wife in the collision. Amy Gaynor. The driver is only going to be charged with " imbalanced load and unregistered trailer." It is outrageous to think that he can get away with this particularly since the York County Sheriff Deputy at the scene and over the phone days later stated emphatically that the driver would be" criminally charged and appear before a Judge ". He did everything wrong from the start and could have prevented this with any minor sense of decency and safety toward others. Gross negligence of the highest order----

1. a rusted and derelict trailer!

#2. a busted winch so he could not load the boat squarely on trailer!

#3. a pick up bumper rotten through from rust!

#4. a non-functioning safety collar to attach the trailer to pickup!

#5. no safety chains and no pad eyes to attach any chains on trailer!

#6. unregistered trailer was expired for 7 years!

#7. no restraining straps on the boat to trailer!

#11. no brake lights on trailer! And he admitted to it all of the above on scene. Instead, this character gets a mere slap on the wrist. If it weren't for her lightning reactions she would have been killed, plain and simple. Still injured though etc., etc.