Several drivers slowed down and kept their distance as they watched on in horror.

Two lanes of the Eastlink were closed as crews worked to clean up the debris and removed the trailer.

An Eastlink spokesman told 9News: 'Don't stop in an emergency lane unless it's an emergency.'

'Maintain a safe braking distance and always be alert for the unexpected.'

No one was injured during the incident. The trailer came loose just as the truck passed the Monash Freeway exit ramp in Rowville, south-east of Melbourne, at about 11.35am on Tuesday

The trailer hurtled down EastLink unattached to its truck. (9News)

Video has emerged of a trailer carrying a ten-tonne load of clay becoming separated from its truck. (9News)

Once Again We have Questions:

How Many Are On The Road?

Who Is Going To Inspect And Perform A Vehicle Autopsey?

Why Didn't The Trailer Stop On Its Own?

Why Didn't The Pressure Breaks Not Engage When The Trailer Came Off The Tow Bar?

So Many Questions We Hope They Will Answer Our Questionso

Footage shows the trailer, filled with clay, detach from the truck on a highway
The trailer eventually crashes into a concrete barrier causing the clay to spill
Two lanes of the road were closed for several hours as staff cleaned the debris

A fatal accident was narrowly avoided after a 10-tonne trailer detached from a truck and skidded down a busy road.

The trailer came loose just as the truck passed the Monash Freeway exit ramp in Rowville, south-east of Melbourne, at about 11.35am on Tuesday.

The runaway trailer, which was filled with clay, crashed into a concrete barrier, spilling the contents all over the road causing the road to be closed for several hours. 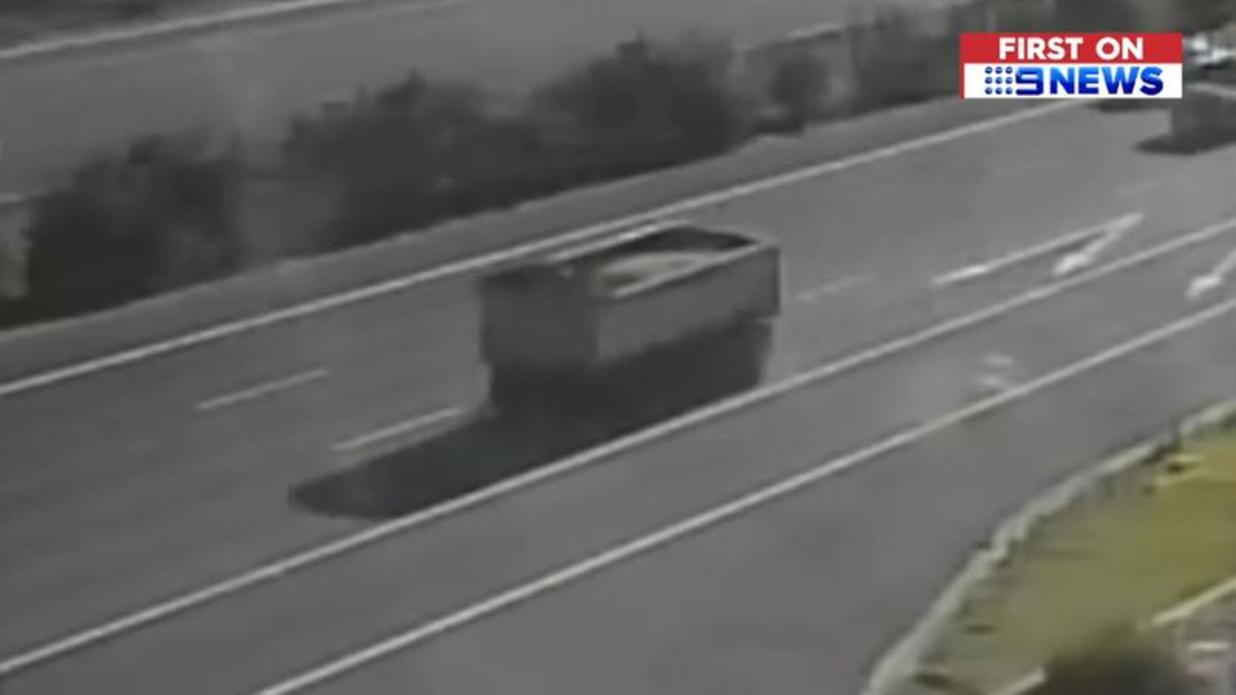 Runaway trailer travels down EastLink after detaching from truck

Footage has captured the frightening moment a runaway trailer detached from a truck on EastLink and travelled hundreds of metres before crashing.

9News has obtained heart-stopping video of a fully loaded runaway trailer barrelling down one of Melbourne's busiest roads after it detached from a truck.

The truck was travelling southbound in a middle lane on EastLink when its trailer detached near the Monash Freeway exit ramp in Rowville about 11.35am today.

Video shows the trailer, loaded with ten tonnes of clay, travelling for hundreds of metres unattached before crashing into a concrete barrier and overturning. 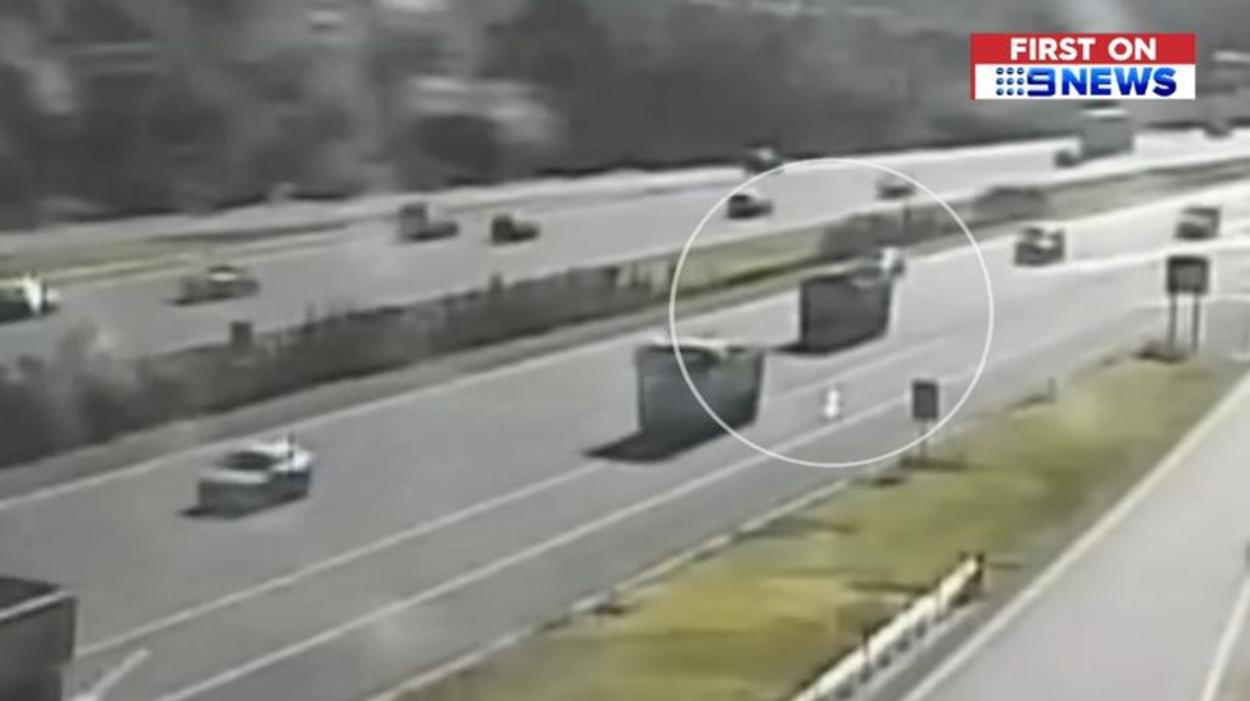 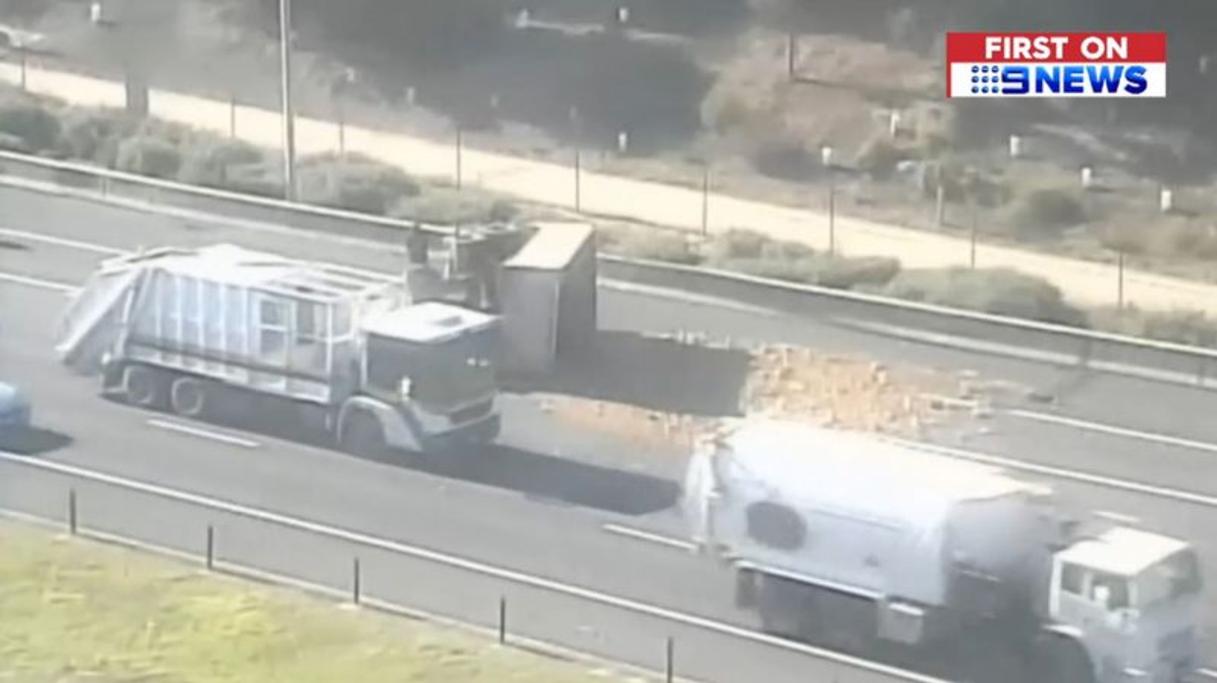 A video has captured the frightening moment a runaway trailer detached from a truck on EastLink and travelled hundreds of metres on its own before crashing.

Two lanes were closed after the incident left 10 tonnes of clay spilt across the busy highway at 11.35am on Tuesday.

Incredibly, the trailer managed to avoid colliding with any other traffic and there were no injuries.

Footage shown on Channel 9 news showed the terrifying traffic mishap could have been much worse.

In the vision, the truck’s trailer can be seen breaking away from the truck, before continuing to roll in a straight line for hundreds of metres, heading southbound on the approach to the Monash Freeway exit. 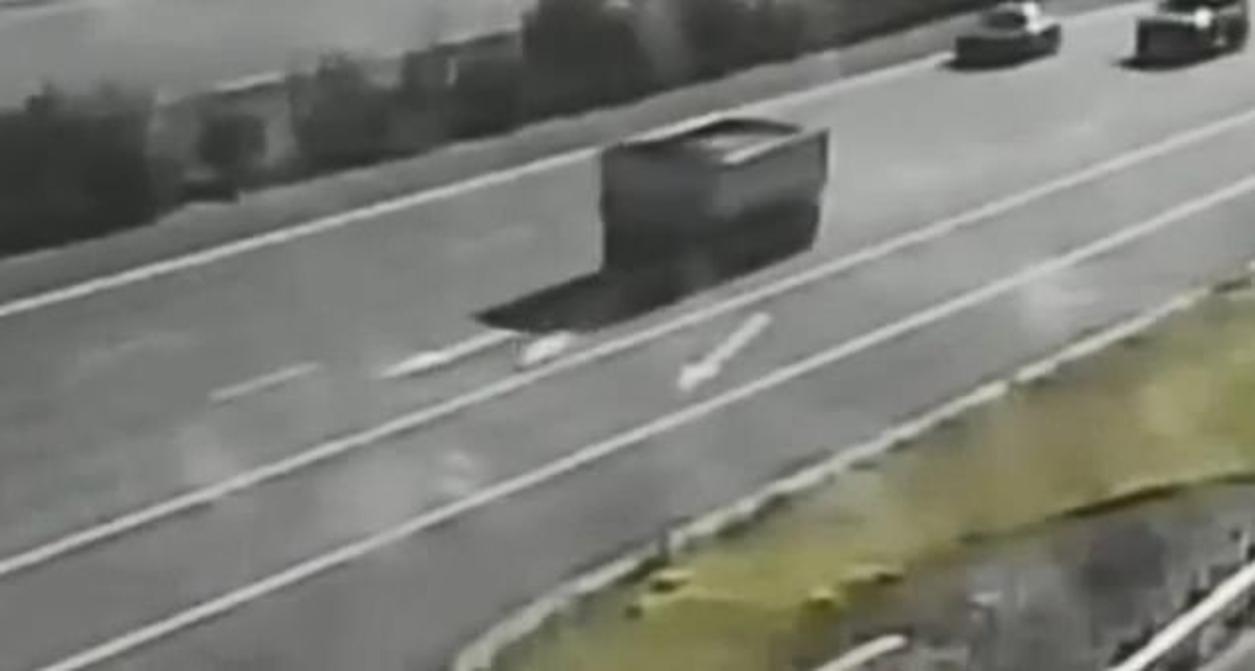 The trailer eventually overturned and spilled its clay load. (9News)
Remarkably, no one was injured.
Two lanes of EastLink were closed for several hours as crews cleaned up the mess and removed the trailer.
An EastLink spokesman said the incident was a reminder to drive safely and use emergency lanes only when needed.
"Don't stop in an emergency lane unless it's an emergency, as vehicles can run off unexpectedly into the emergency lane," the spokesman said.

The trailer gradually veered from the middle lane to the left lane and then smashed into a concrete barrier on the side of the highway.

Lanes were closed until 2.20pm as the EastLink incident response team cleaned up and arranged removal of the trailer.

The truck driver was uninjured.

It was believed a faulty tow bar was the cause of the load coming loose.

EastLink spokesman Doug Spencer Roy said it was a rare incident to see a detached trailer travelling independently such a long distance.

“It’s lucky that no other vehicles were hit,” he said.

In a separate incident, a car fire in the Burnley Tunnel at 3.50pm temporarily closed all lanes of the tunnel and led to major peak hour delays.

Do you have video, photos or a tip-off that you think 9NEWS would be interested in?

We have two main ways to get in touch:

Large files (when it's too big to send by email or text): 9news.wetransfer.com

Please include your name, location and contact details - preferably a phone number - in case we need more information.

By submitting information to 9News, you agree to comply with Nine's terms and conditions. To read our Personal Information Collection Statement please click here.

If you would like your name to be kept confidential, please let us know in the submission.

Please note that due to the high volume of emails we will not be able to respond to every submission.

If you are seeking particular videos or archive footage from Channel 9, you should submit a request to archives@nine.com.au or by post to Archives, PO Box 27, Willoughby, NSW 2068. 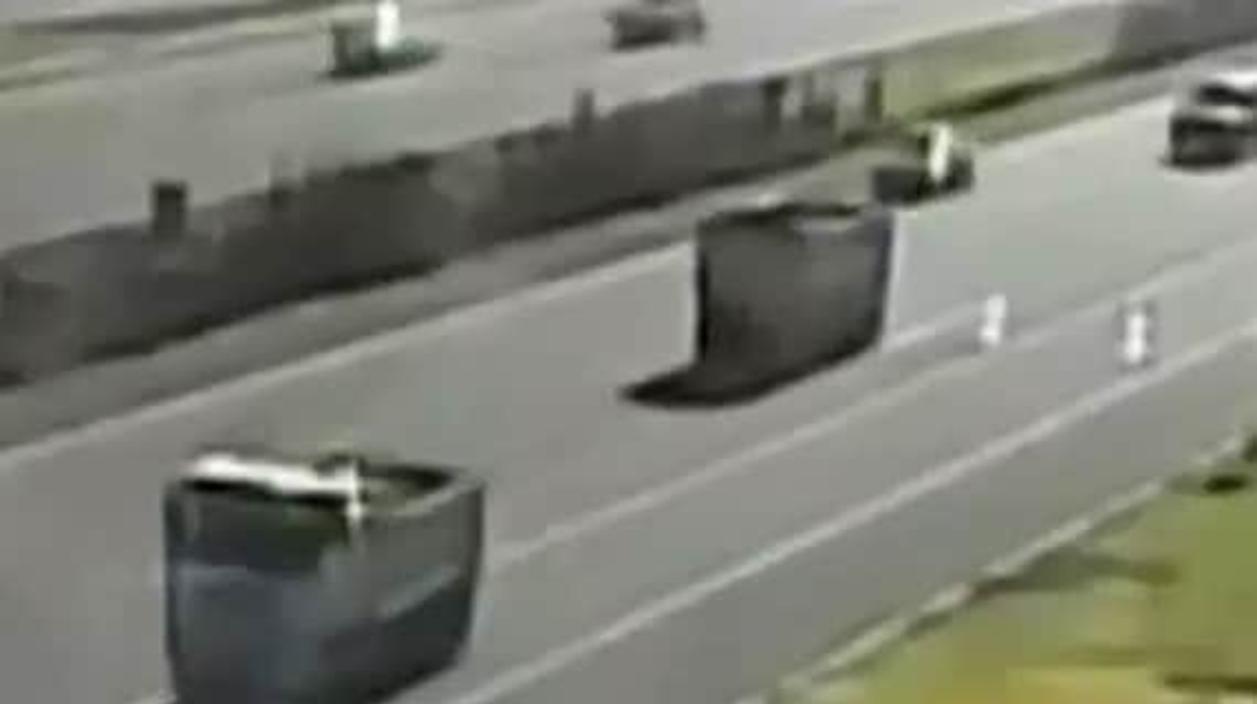 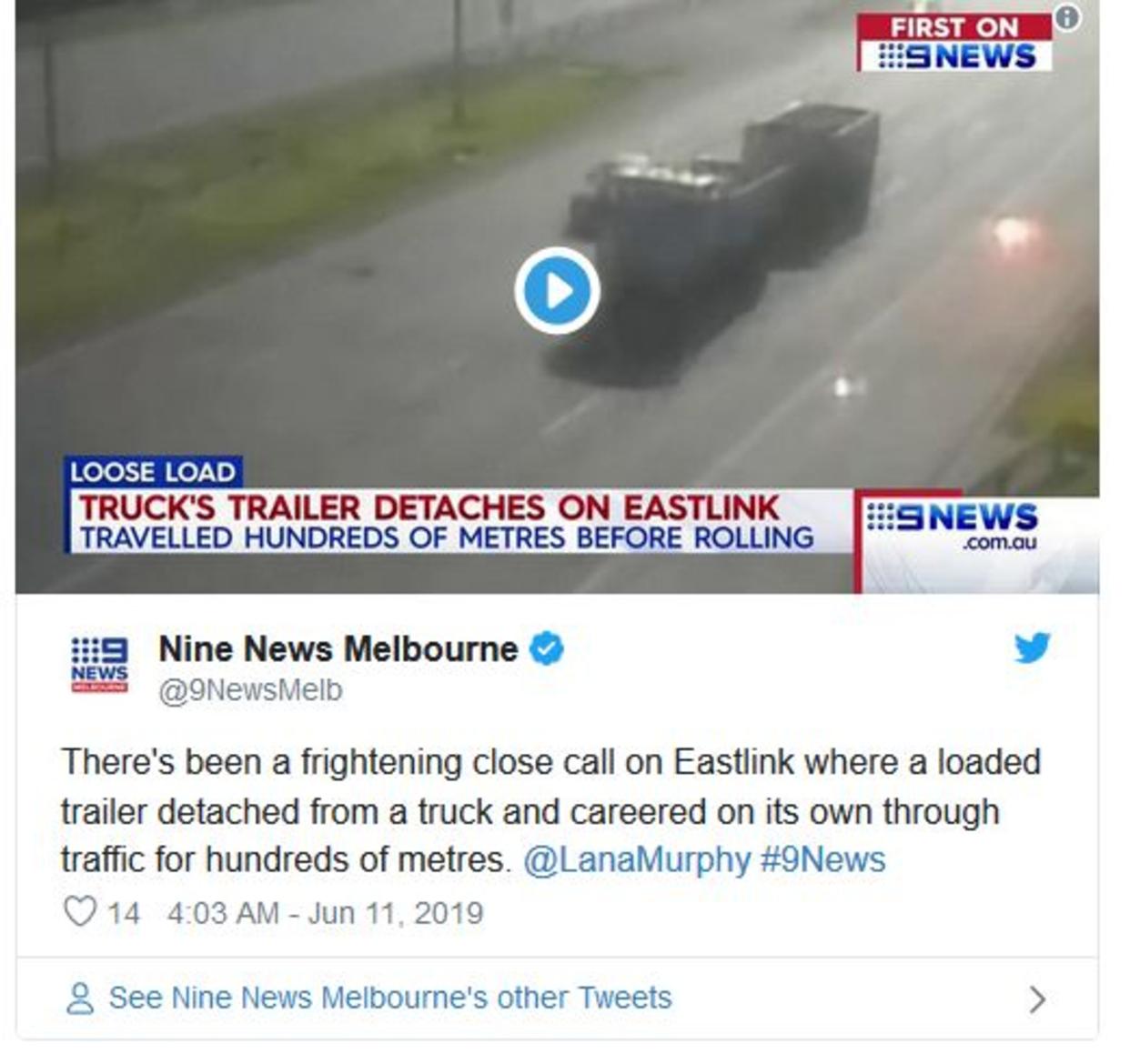