The National Trailer And Towing Association United States Of America

The National Trailer And Towing Association Of United States

You see our mission is to get a National Standard Across All States! No more state by state standards where a homemade defective trailer can travel into a state with better safety standards and kill anybody.

We need a NATIONAL Bench Mark Standard across all trailers in all states...just like a car has....when you buy a car in Virginia...it should be the same standards if you buy it in Texas.

Currently we have 6 States with no safety chain law....12 States with no registrations.....Farmers with exclusions....."Homemade Trailers Being built with no product liability and being sold to others"  Exclusions for trailers under 3,000 GVWR so the Manufactures make them weigh 2999.

Every State does not have a section on "How To Tow A Trailer" in their Drivers Ed Manuals...but so many vehicles come with Hitches.

Click Here For The Number Of Deaths Up To 2008 Only In England Note: Since
This Date They Refuse To Provide New Updates Why? 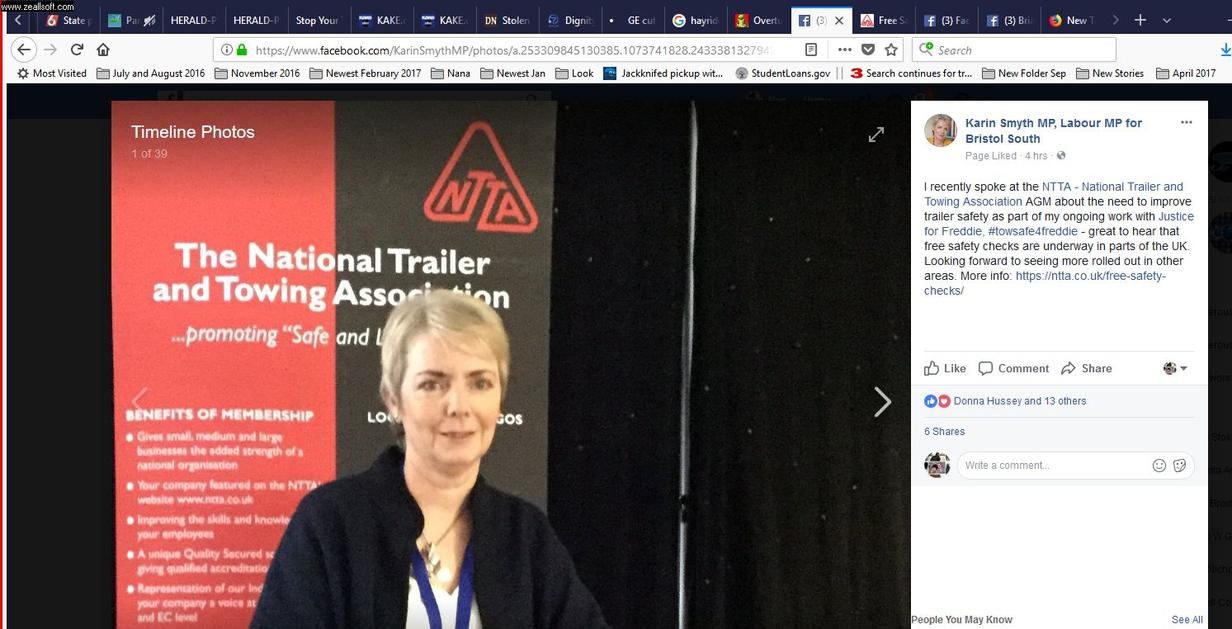 Our constant action worldwide compelled action in so many other countries.  In England it was not until another death of a child named Freddie Hussey did action take place.  You must know that before Freddie a child named Findlay was killed and so many others by a loose unsafe trailer.  See below:

It was not until Freddie Hussey was killed that a lawmaker decided to really get involved  and another family's loss that defective and loose trailers became important.

The National Trailer And Towing Association In the United Kingdom....sponsored this...see the results!

34 vehicles were stopped, 21 of which were towing trailers and 11 towing caravans. Of all the vehicles stopped, only 12 were clear of faults.

On Average out of 100 trailers we discover only 29 were clear of any safety violations......

No Lawmaker in the Entire United States has even considered any safety check ups on these trailers.

The Entire fleet of small Horse, Utility Trailers and Boat Trailers under 3,000 GVWR is completly and entirely run on a "Self Certification Safety System.  The entire industry is defective.

In The United States Of America...nobody has done this...NOBODY WANTS TO....Instead of helping our cause the powerful lawmakers ignore and harass our cause and suggest we better give up..."Or Else"  Why?

In The United States they promote Unsafe And Illegal Towing...Even A Cop who is trained to give us a ticket for a seat belt violation is not even trained on How To Tow?

Recently, NTTA has been working on an initiative to introduce the UK’s first Free Safety Check program for the light trailer industry.

All trailers, unbraked and braked, up to 3500kg (gross weight) can be taken to a participating NTTA QS Member for the Free Safety Check, which could highlight issues that should be addressed.

Working with the National Vehicle Crime Intelligence Service and Central Registration & Identification Scheme, officers ran the first Caravan and Trailer operation of the season at Junction 19 of the A12 trunk road, Chelmsford, near Boreham Services Lorry Park on Tuesday 4th April 2017.

34 vehicles were stopped, 21 of which were towing trailers and 11 towing caravans. Of all the vehicles stopped, only 12 were clear of faults.

Two overweight 3500kg vehicles were found to be 15 per cent over the maximum authorised mass when weighed and the drivers fined £600.

A number of vehicles’ tyres were also over the five-year recommendation and a total of eight vehicles had breakaway cables that were incorrectly fitted, or none fitted at all. Some vehicles towing caravans had no extendable mirrors.

The driver of a trailer with a seized braking system was given a £100 fine and 3 points on his licence for driving a vehicle in a dangerous condition. Of the vehicles that were stopped, four drivers were issued with fines and three licence points after it was discovered they did not have the correct category BE licence.

To find a Safety Check Centre near you, please click here

Note: No Lawmaker in the Entire United States has been this Courageous....as this lawmaker in the United Kingdom...We ask....if she deems it necessary to help save lives....why not the United States?  Answer...our lawmakers are more concerned with the "Russians" and the money from big corporations like the NATM who pays them off with donations to let the killing continue.