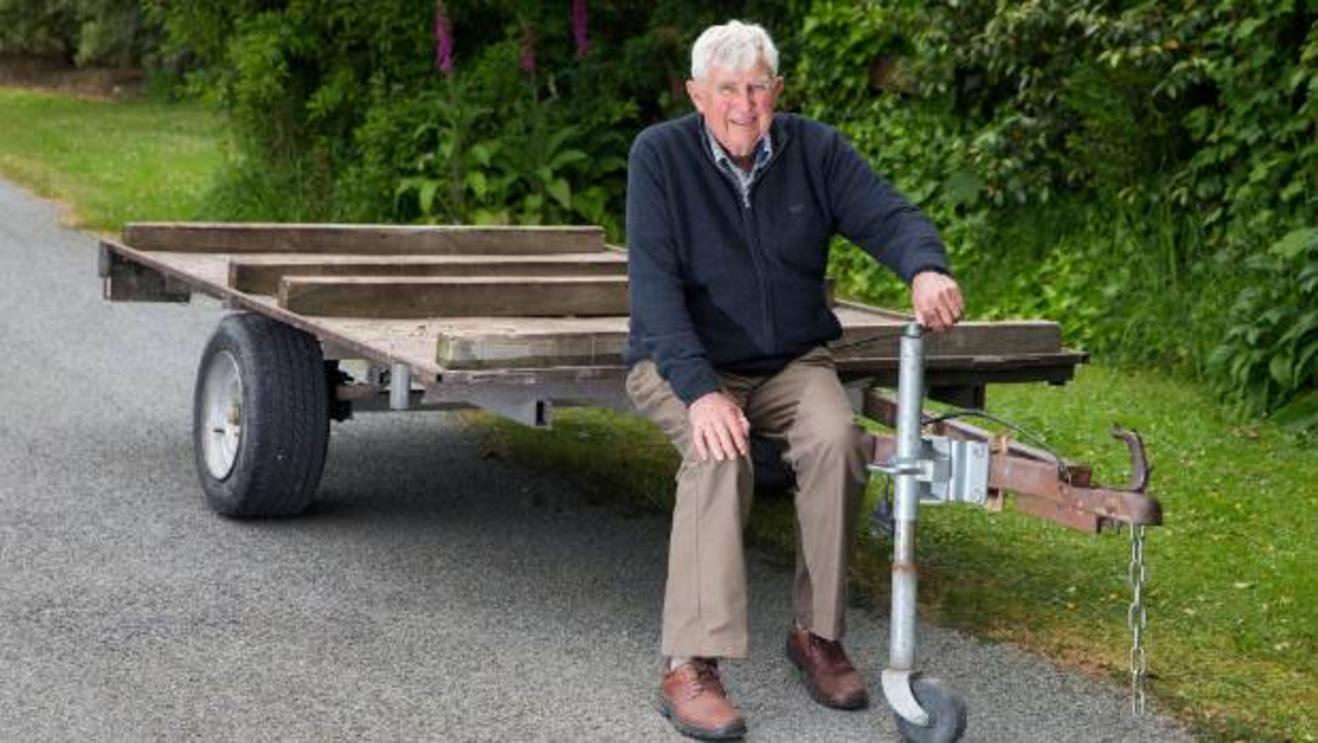 What a piece of total crap.  Look at the picture below the trailer is "Homemade" see the car tire which is not ST Rated and then see the one safety chain in violation of the law in New Zeland.

It is amazing all these people helped a man that can potentially kill others when this dangerous and  unsafe and poorly maintained trailer should come off the hitch and slam into an innocent victim.

This trailer needs to be destroyed immediately.

And the cop needs to be fired for returning such a defective piece of equipment.

Murray Sisson's trailer has been returned.

An 82-year-old furniture maker who had more than a tonne of macrocarpa furniture stolen from his Pleasant Point property is "so grateful" for the support from people all over the country, following the return of one of his stolen items.

Murray Sisson had a macrocarpa table, a chair and a flat-deck trailer stolen from his property on Thursday night.

The furniture had been loaded up on Thursday to be delivered to a buyer on Friday, but when Sisson went out to his workshop on Friday morning the trailer and furniture were gone.

Police were made aware of the theft of a trailer and two "distinctive" pieces of furniture on Friday.

On Monday morning, the trailer had been located but the furniture was yet to be found, Sisson said.

The trailer was found parked at the carpark/bus area on Maitland St in Pleasant Point by bus drivers, who then reported it police, he said.

Sisson said it was "great" the trailer had been returned and hoped people would still keep an eye out for his furniture.

"The support from the community and people all over the country has been unbelievable."

He said hundreds of people had been sharing pictures of the furniture online.

"It just went crazy," he said.

Constable Kris Howes, of Pleasant Point, said the trailer was found not far from where it had been stolen.

"It was just the trailer minus the furniture.

"Someone possibly had a bit of a guilty conscience," he said.

Police were following possible leads that the furniture could be located in the Geraldine area, he said.

"People should keep an eye out for distinctive furniture."

It was not the type of furniture you see in Mitre 10, he said.

Sisson had been making furniture, under his company name Weka.A, full time since he retired.

All pieces were made to order, he said.

The furniture which had been stolen had been displayed and sold at the Get to the Point market day held at Pleasant Point last weekend.

"We were supposed to deliver it to Albury, but we couldn't get it straight on the trailer - we had to wait for a forklift," he said.

Given the trailer and the furniture were unique, Sisson said they would be quite easy to identify.