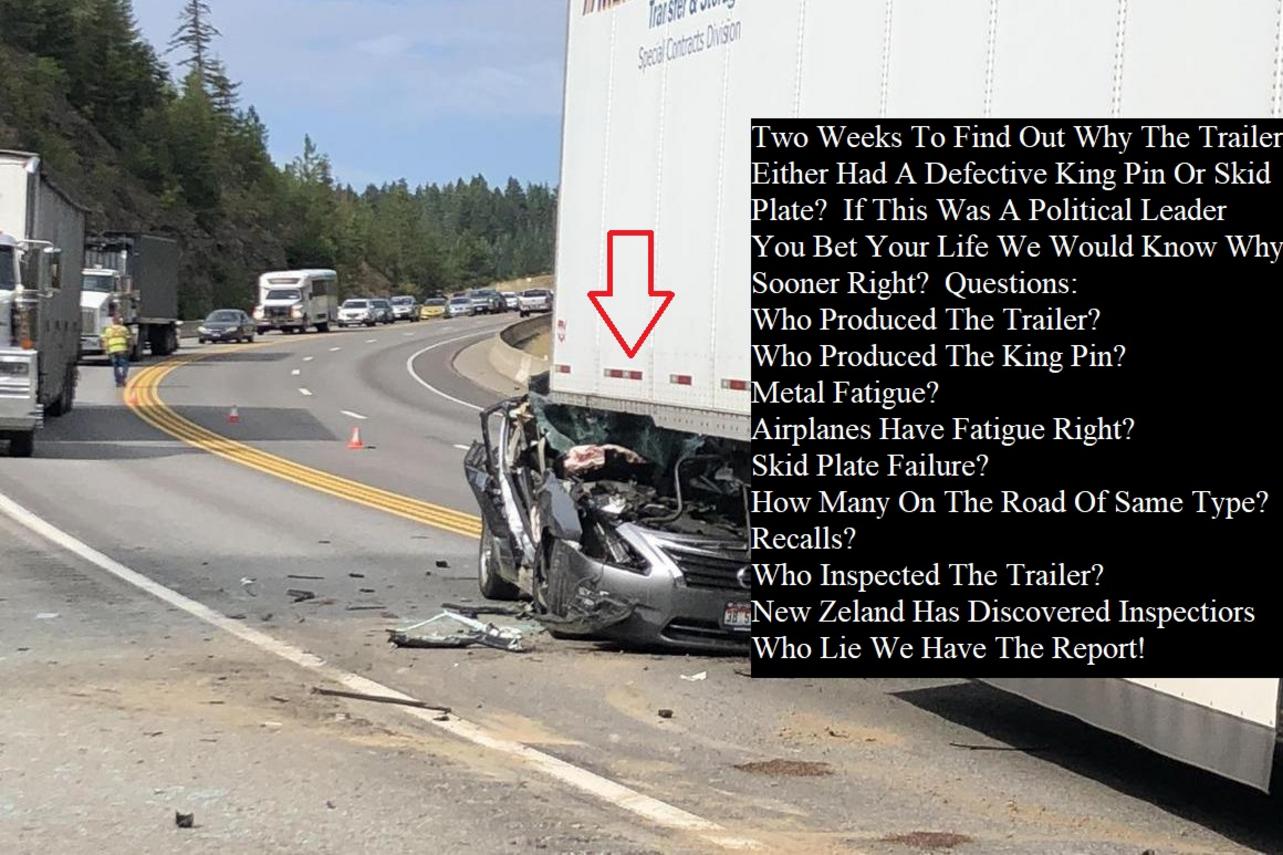 The driver of a Nissan sedan that was struck head-on by a semitruck’s disconnected trailer died in the hospital one day after the Aug. 14 crash, according to an Idaho State Police news release.

Nicholas S. Spooner, 25, of St. Maries, Idaho, died at 11:43 a.m. on Aug. 15 at Kootenai Health. His passenger, Timothy P. Spooner, 59, was transferred to Harborview Medical Center in Seattle and was listed in serious condition Monday morning.

Idaho State Police told The Spokesman-Review that Nicholas Spooner was on life support until Monday morning so his organs could be donated.

The Nissan sedan was wedged under the semitruck trailer, and rescue crews had to hoist the end of the trailer to free the victims.

Both men in the Nissan were wearing seat belts, according to a news release from Idaho State Police. They were transported to Kootenai Health in critical condition.

Kahoonei, the tractor-trailer driver, and his passenger, Darnelle I. Kahoonei, 51, of Graham, Washington, were not injured.

The cause of the crash was initially suspected to be an equipment failure related to the tractor-trailer, but Idaho State Police said it has not made an official determination.

When the media and our public safety officials continue to not report the truth we declare "Fair Use" doctrine "The Interest Of Public Safety Outweight's Any Copy Rights When We Can Prove That Time And Time Again Suspected Coverups Occur"  Ron J. Melancon

More To Come And Expose

Time and time again as we look at our "Crash Reconstruction Teams" To fully disclose and determine why these equipment failures keep happening our organization is the only ones that is trying to develop a common cause as to why so many innocent men, women children and horses are killed every year by a "Passenger Vehicle Towing A Trailer And Commercial Vehicles towing a trailer.

What we do know about this most recent tragic accident.

It was a Peterbuilt tractor

It was a Wabash

Is is owned by Montana company Mergenthaler Transfer & Storage

Normally we never find out all of this info.

We ask who produced the Skid Plate?

The Connection To The Skid Plate

Where is the tractor? Did they impound?

Where is the trailer? Did They impound?

We ask that the Governor Of Idaho establish an Oversight Committee on this death and we ask will they sacrifice this American for the Corporations that might have produced a defective product?

We Quote One Of Our Mentors:

ISP (Idaho State Patrol) says the circumstances of the accident are still under investigation, but “it appears to have been caused by a major equipment failure on the part of the semi-truck,” though ISP representatives have not ruled out a “freak accident.”
Translation: If they can't figure out the complexities of big rig loosing it's trailer-crashes they will punt claiming 'no foul leaving the family to hire lawyers who have investigators on staff. What a cop out.
Tim HRedacted.... here