Click Here And See What
Another Traffic Back Up
Caused 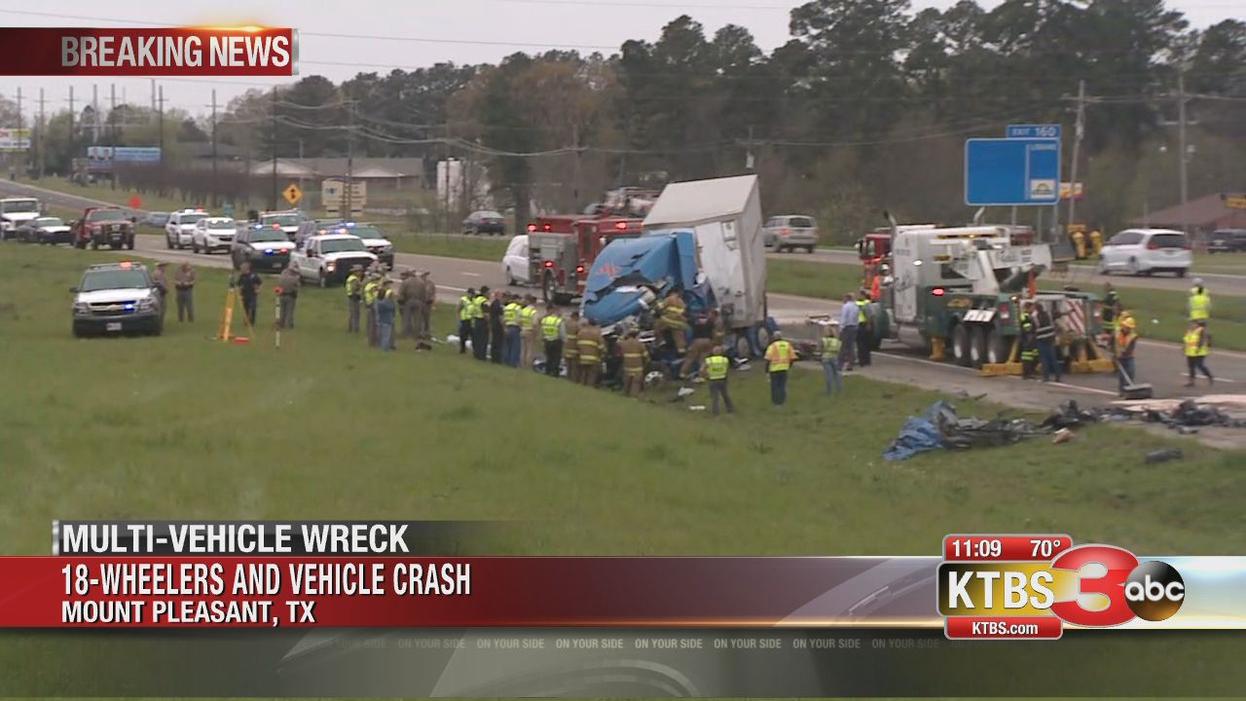 Victims identified in I-30 crash in Mt. Pleasant

(MT. PLEASANT, TX) -The driver of a 2018 International Truck-Tractor Semi-Trailer (TT-ST) and one of five vehicles involved in yesterday’s crash, on IH-30 at mile marker 162 in Mt. Pleasant, Texas, has been identified as Wanda Gebhart.

The 2011 Toyota Sienna, occupied by a family of five, was the first vehicle to be struck in the crash. The driver of the Toyota, Jeffery Brokish, a 42 year old male from Savoy, IL, was transport by air ambulance to a trauma center in Tyler. Jessica Brokish, 41 year old female, and two sons, ages nine and six and a two year old daughter were pronounced dead on scene.

This is an ongoing investigation. No additional information available at this time.

Both lanes of I-30 have reopened after emergency crews were on the scene of a deadly crash in northeast Texas.  Officials tell KTBS 3 News that four 18-wheelers and passenger vehicle crashed Friday morning on I-30 near Mt. Pleasant.

Details on the crash are limited, but authorities confirm there are at least five confirmed deaths. Three of those dead are children under the age of 10 and their mother. The fifth death was the driver of the 18 wheeler that hit the minivan. The father is in stable condition and was taken to a Tyler hospital. That's according to the Mt. Pleasant Police Department. The family was from Savoy, Illinois.

Troopers say the crash started when a U-Haul truck and trailer lost control and rolled over. No one was injured in that crash.

Stay with KTBS 3 News on the air and online as this story continues to unfold.

More and More deaths can carnage are now being caused  when you are stuck in an Accident Backup.  More and more reports are coming in to our organization when people at the end of a accident back up are getting plowed by truckers behind going full speed and suddenly coming on the traffic backup and not slowing down.

Note:  This accident and all of these deaths were caused when a person driving a U Haul Truck towing the trailer fliped over and this preventable accident caused all of this.

If the U Haul Truck and trailer never fliped over all of this would not have happened.

Note:  Anybody can drive a U Haul truck and trailer at any age even a 98 year old and no class or training is required.

Including RV'S that are bigger than Greyhoud buses.