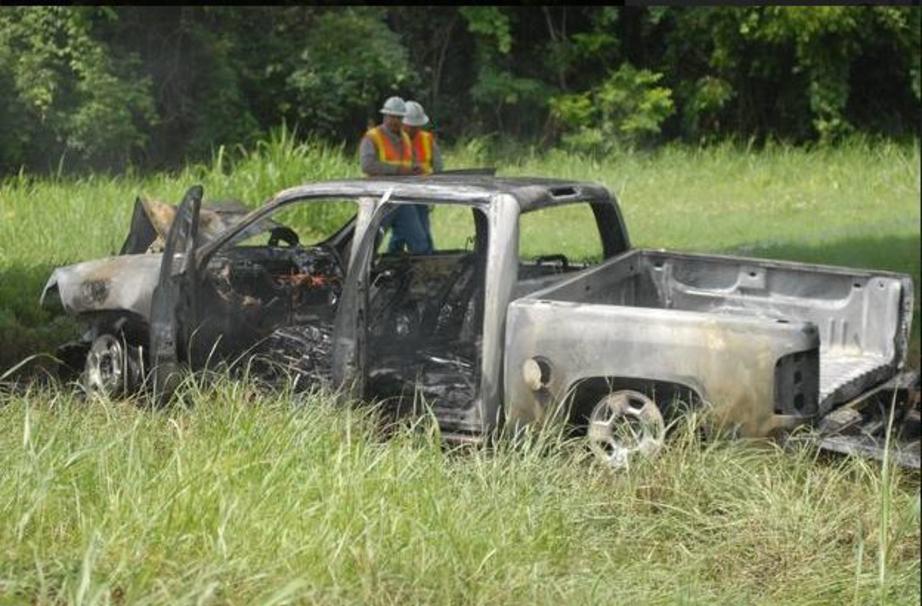 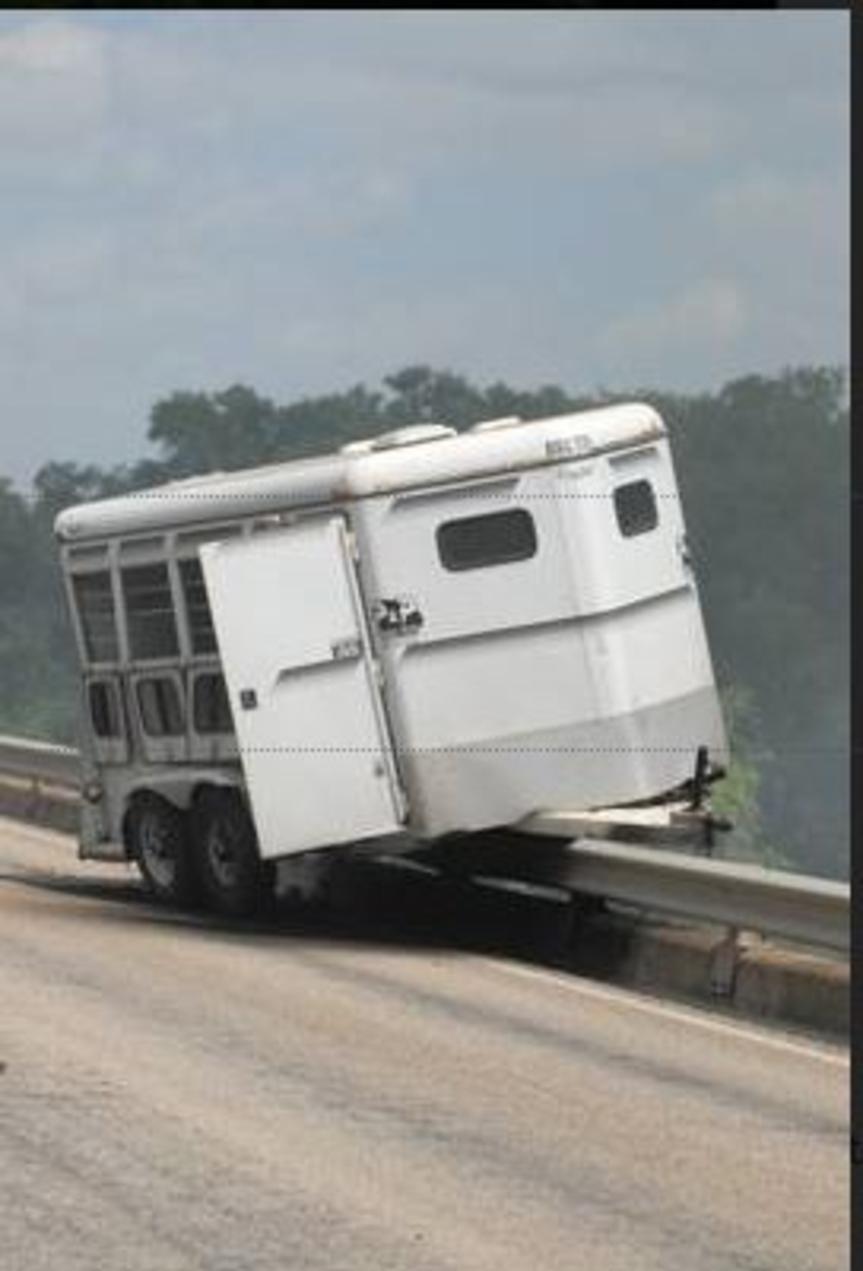 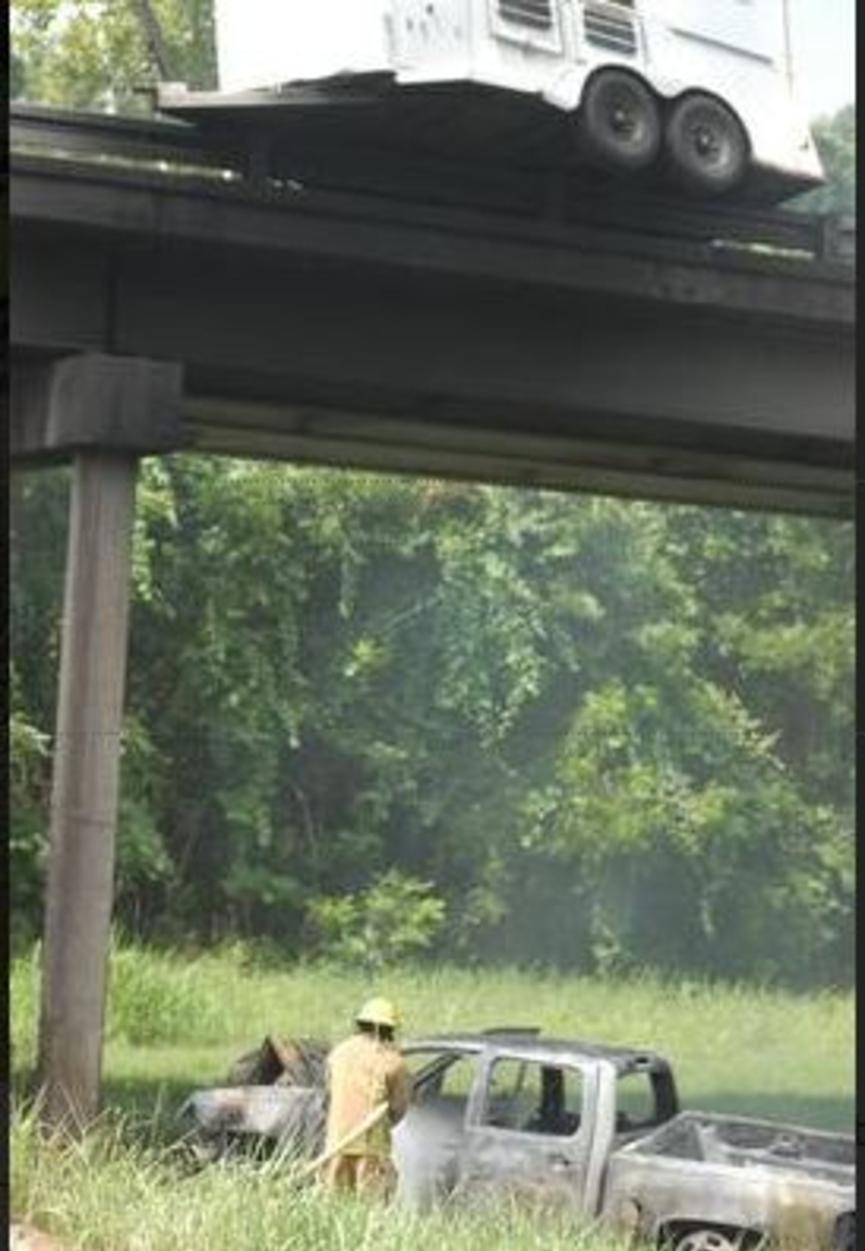 Aug. 2, 2014 at 6:48 p.m.
Updated Aug. 5, 2014 at 11:12 a.m."No safety chains, defective tires, defective hitches, speed, inexperience ... all of those factors add up to injury and death," he continued. "Shouldn't we do all we can to prevent accidents from happening in the first place? By having an agreeable safety standard that all vehicles must adhere to can save lives."

A horse trailer hangs over the railing of a bridge on state Highway 111 in Lavaca County after the driver of the truck pulling it lost control and the truck went over the bridge. The driver and passenger in the truck as well as the horses were not injured.

A recent wreck involving two teens, a horse trailer and a 30-foot drop from a bridge is spotlighting a national concern raised by a consumer advocate.

Ron Melancon, of Virginia, has spent more than 15 years advocating for stricter regulation on livestock farm trailers and runs an information website to educate the public about an issue that's highly unreported.

"I got tired of seeing people die," said Melancon, who lives just outside Richmond, Va., and who worked for three years as an emergency medical technician.

He said he saw people dying in wrecks caused by carelessness.

"No safety chains, defective tires, defective hitches, speed, inexperience ... all of those factors add up to injury and death," he continued. "Shouldn't we do all we can to prevent accidents from happening in the first place? By having an agreeable safety standard that all vehicles must adhere to can save lives."

Melancon's website - dangeroustrailers.org - brings attention to several articles and stories of wrecks and injuries in which a trailer was a prominent factor to the cause. Although his website cites the statistics of lives lost in trailer-driven fatalities, the state and national governments do not track wrecks involving livestock farm trailers.

The Texas Department of Transportation stopped categorizing trailer-related wrecks by type of trailer in 2010. The last year of data showed that out of 980,305 vehicles involved in crashes, 10 were livestock trailers.

Two Edna teenage girls escaped injury in a fiery wreck July 21 after falling off the side of a bridge on state Highway 111 in Lavaca County near the Jackson County line.

The horse trailer started whipping, causing the truck to veer to the right and strike the guardrail. After it hit the guardrail, the pickup crossed the highway, striking the other guardrail. The trailer then detached, and the pickup dropped 30 feet over the side of the bridge, Trooper Gerald Bryant, a spokesman with the Texas Department of Public Safety, told the Advocate.

The trailer was carrying two horses, which were also uninjured.

No regulations govern these types of trailers, which fall under a farm exemption.

The only requirement is a Class C license.

Farm trailers weighing less than 34,000 pounds aren't required to register with the Texas Department of Motor Vehicles and don't need a license plate - a practice that leaves Melancon on alert.

"What that's telling me is that if that trailer comes unhitched and hits me, how do I prove who owns it?" he asked.

Despite the lack of regulations, law enforcement in the Crossroads say they have not seen alarming traffic violations or an increase in wrecks related to livestock trailers.

"Our deputies have not reported any traffic safety violations specific to these types of trailers," Lt. Thomas Eisman of the Victoria County Sheriff's Office wrote in an email. "Motorists hauling animal trailers do not stand out among the motoring public in Victoria County."

Goliad County Sheriff Kirby Brumby and Calhoun County Sheriff George Aleman both agree traffic safety involving livestock trailers has not shown to be an issue in their respective counties.

Scott Nelson, 49, of Victoria County, said he's hauled livestock all of his life and said he feels safe with a trailer.

The axle in smaller horse trailers is in front, he said, so if the weight is out of alignment, the trailer pulls.

Nelson's wife, BJ, said those who aren't raised in rural areas just don't get that teenagers, such as the girls in Edna and most country folk, have been raised on farms. Hauling livestock is part of their culture.

Les Zeplin, who has sold livestock trailers for almost 20 years, said when it comes to safety, the error isn't necessarily with the production of the trailer but more with the person who drives and loads it.

Many times, he said, you'll see people hauling a trailer with a truck that's not heavy enough for the pull. Zeplin also said the misalignment of weight is an issue.

"A lot of people don't understand you've got to have tongue weight," he said. "If there's too much weight in the back, it'll whip."

Melancon said his desire for change is to call out the politicians that allow basic safety standards to be ignored.

Phone calls and emails to Victoria's state Rep. Geanie Morrison about the issue were unanswered.

"Let's work together and make a better Texas," Melancon said. "You might say we have enough standards - we don't. I want to call them (politicians) out. You don't want to make safety standards better because your constituents don't want them, but what gives them the right to affect my life because you failed to properly take care of it?

"Let's have a meeting of the minds. Let's get the problem fixed."