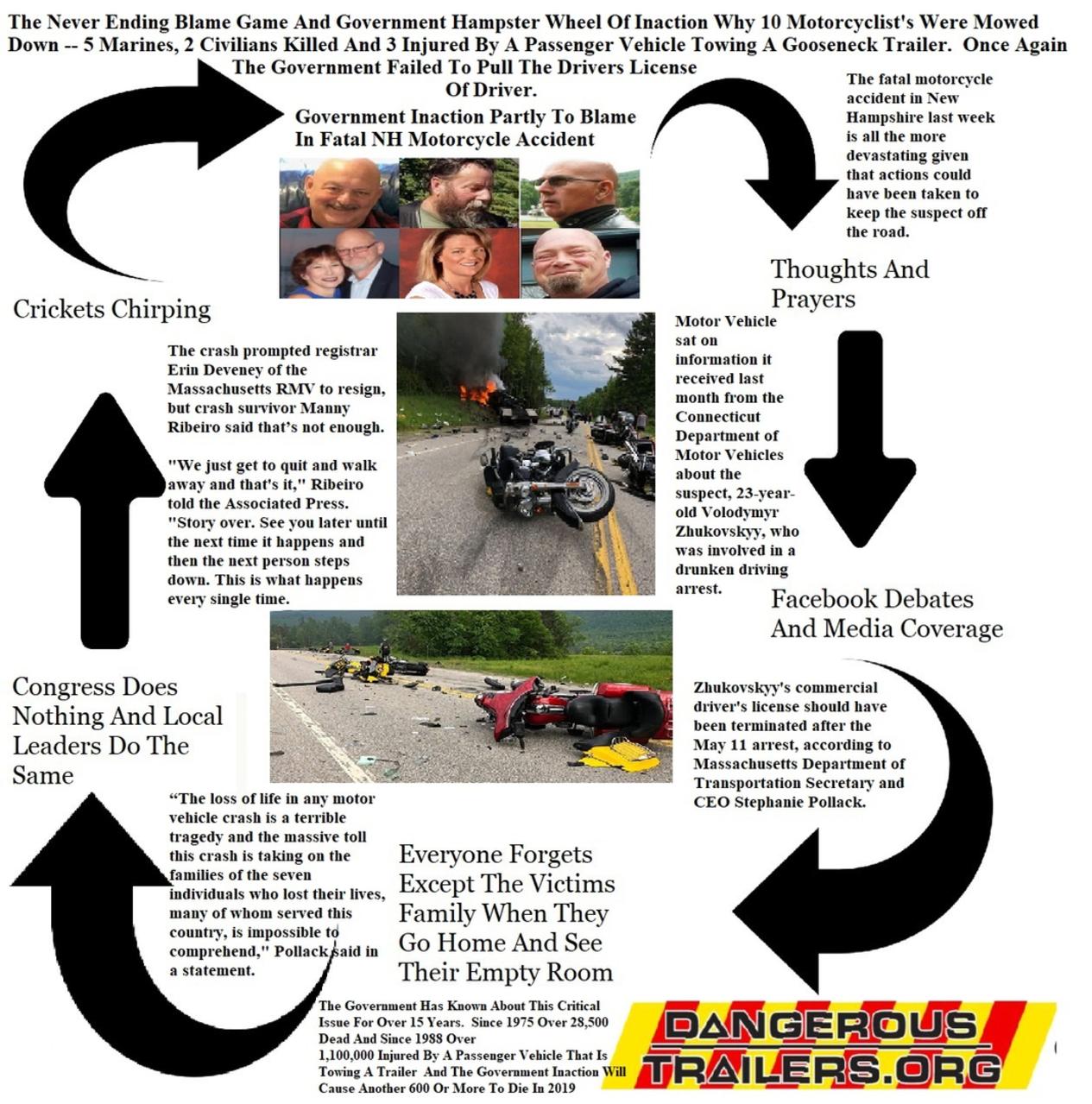 The First Reporter In Our 15 Years Of Trying To Get Someone To Say This Exact Quote:

We Have Document Evidence That We Can Prove And It's Not Fake News!  Click Here 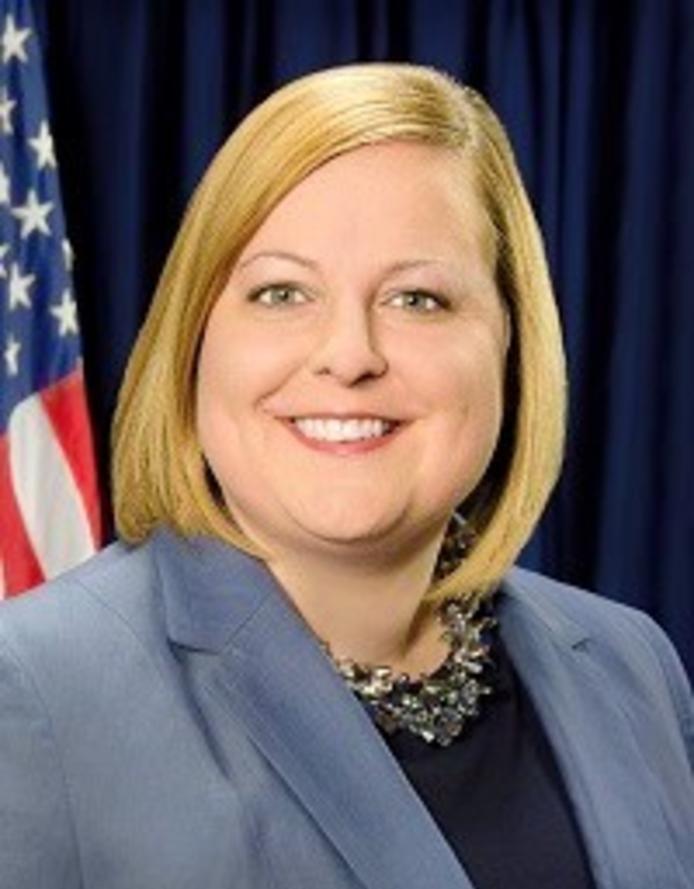 The fatal motorcycle accident in New Hampshire last week is all the more devastating given that actions could have been taken to keep the suspect off the road.

The Massachusetts Registry of Motor Vehicle sat on information it received last month from the Connecticut Department of Motor Vehicles about the suspect, 23-year-old Volodymyr Zhukovskyy, who was involved in a drunken driving arrest.

Zhukovskyy's commercial driver's license should have been terminated after the May 11 arrest, according to Massachusetts Department of Transportation Secretary and CEO Stephanie Pollack.

Finally In Print A Reporter Said Exactly What We Have Been Saying For Over 15 Years!

Government inaction on all "Passenger Vehicles That Tow Trailers"  All RV'S- All Hayrides and Parades Floats have killed and or injured over 2,000,000 million  since 1975 note they did not include any injuries before 1988. 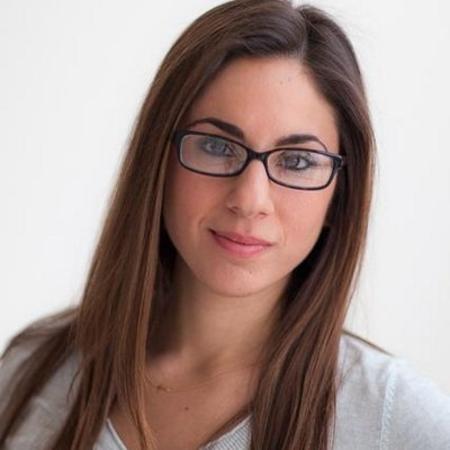 he fatal motorcycle accident in New Hampshire last week is all the more devastating given that actions could have been taken to keep the suspect off the road.

The Massachusetts Registry of Motor Vehicle sat on information it received last month from the Connecticut Department of Motor Vehicles about the suspect, 23-year-old Volodymyr Zhukovskyy, who was involved in a drunken driving arrest.

Zhukovskyy's commercial driver's license should have been terminated after the May 11 arrest, according to Massachusetts Department of Transportation Secretary and CEO Stephanie Pollack.

Zhukovskyy failed a sobriety test on May 11 in East Windsor, Conn., after police were alerted to someone revving a truck engine and jumping around outside of a Walmart, according to a police report. The West Springfield man was arrested, but police said he refused a chemical test — which in Massachusetts results in the automatic termination of a trucker’s license, according to MassDOT.

Connecticut, however, “failed to provide sufficient information” through the federal licensing system about the refusal to take a test, MassDOT said. Therefore, the automatic license suspension did not happen.

Then on May 29, the Connecticut DMV sent a message about the OUI arrest to the Massachusetts RMV through the state-to-state messaging system for registries — but still no suspension.

“While the RMV system could not automatically process the communication, it generated a notification requiring manual review,” the MassDOT statement reads. “This review had not been performed by RMV personnel as of (Sunday) June 23, which is why the May 11 chemical test refusal does not appear on Zhukovskyy’s driving record and why his license had not been suspended in MA.” (Boston Herald)

“The loss of life in any motor vehicle crash is a terrible tragedy and the massive toll this crash is taking on the families of the seven individuals who lost their lives, many of whom served this country, is impossible to comprehend," Pollack said in a statement. "The Massachusetts Registry of Motor Vehicles has a responsibility to enforce the laws governing safe operation of vehicles and carries out its mission to the best of its abilities."

Court documents allege Zhukovskyy, a Ukranian national with permanent residence status in the U.S., was driving erratically and crossed the center line around 6:30 p.m. Friday on Highway 2, a two-lane roadway that passes through the small town just north of Mount Washington. His Dodge pickup truck was towing a flatbed trailer when it plowed into the bikers. All of the victims were members or supporters of the Marine JarHeads, a New England motorcycle club that includes Marines and their spouses. Those killed ranged in age from 42 to 62. (FoxNews.com)

"We just get to quit and walk away and that's it," Ribeiro told the Associated Press. "Story over. See you later until the next time it happens and then the next person steps down. This is what happens every single time."

Last month’s arrest was not the first time red flags went up about Zhukovskyy. In 2013, he was placed on probation and his license was suspended for 210 days for a drunken driving charge in Massachusetts. And earlier this month, police in Texas said he was involved in a tractor-trailer crash near Houston. He said at the time he was cut off, prompting him to lose control of the vehicle. But months earlier, the same Texas police department said they found a crack pipe on him when he was  “talking to himself and acting strange” at a restaurant.

Friends of the victims are rightfully incensed.

“I cannot believe he (Zhukovskyy) was just busted last month and still out driving around,”  Leigh Nichols, whose close friend died in the crash, told the Boston Herald. “Whoever screwed up, that blood is on their hands as well. The company should have pulled his driving record and known he got busted.”

Zhukovskyy pleaded not guilty on Tuesday to seven counts of negligent homicide.

Erin Deveney of the Massachusetts RMV