An 8-year-old boy lost his life this summer when a Fourth of July parade float driven by his father ran him over in Edmond, Okla., during the city’s annual LibertyFest event. Later that evening, a 7-year-old boy died after suffering injuries in a similar parade float accident in Annapolis, Md. Yet another fatality occurred that day in Bangor, Maine, when a fire truck in a parade hit a man driving an antique farm tractor.

As communities across the country hold holiday parades this time of year, the National Transportation Safety Board (NTSB) is calling for localities to adopt more stringent safety measures. The agency issued several recommendations in a November report that found governments and sponsoring entities often lack adequate planning procedures and clear rules for parades.

How Safe Are Oil Tanks on Trains?
Cause of NYC Train Derailment Under Investigation
National Transportation Safety Board Takes Over BART Tragedy Investigation

The most notable recommendation for localities in the NTSB report, which evaluated a 2012 Veterans Day crash in Midland, Texas, calls for governments to require written safety plans as part of an event approval process. At a minimum, NTSB states, the plan should address risk mitigation and contingency planning, safety briefings, driver and vehicle screening, float safety and notifying railroads or other entities about potential hazards.

“We want to really get organizations and communities that want to do parades to think about the risks ahead of time so that they can be managed,” said Robert Molloy, deputy director of the NTSB’s Office of Highway Safety.

Some of the more common parade hazards include participants falling off floats or performers being run over. Children running out into streets to retrieve candy also pose safety risks, Molloy said.

In the Midland report, NTSB reviewed policies from a sample of nine municipalities and universities, finding wide variation in parade operating rules and procedures.

Of the nine reviewed, only the city of Dallas required event organizers to submit a route plan for approval. Most policies also didn’t address driver communication, walking support and speed limits. Two cities and two schools prohibited objects being thrown from floats, while the other five lacked such rules.

Our Organization is the only only one who is keeping track.  The Government has no clue as they really do not cover or report all the hayrides and parades that have accidents or conducted on "Private Property" Notice the reporter says.... Some Governments?  We State that over 90% do not have any clue or idea on Parade Safety. 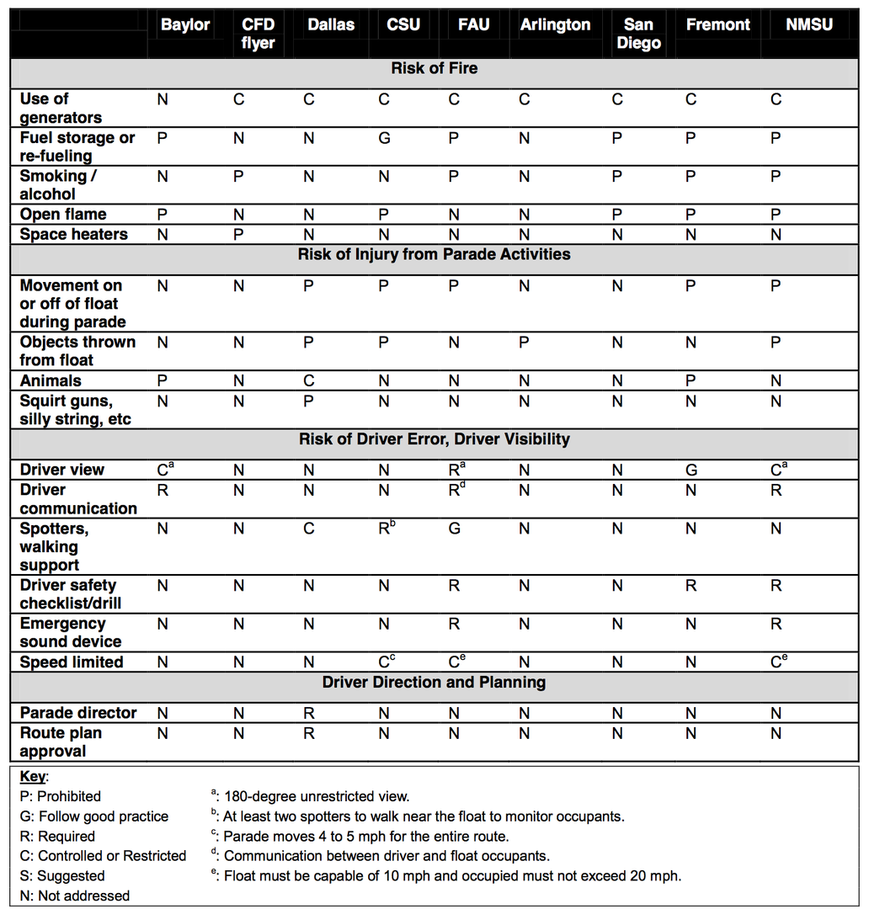 Without clear guidelines and rules, communication can break down.

The Midland crash occurred when a Union Pacific train collided with a float carrying veterans and their wives, killing four people and injuring 12 others. NTSB identified the probable cause as the failure of the city and parade organizer, Show of Support Military Hunt, Inc., to address the risks of routing the parade through a railroad crossing.

In previous years, a city police lieutenant had placed officers at crossings to monitor trains, or he notified the railroad of the parade so it could either slow trains or temporarily stop traffic. When the police lieutenant retired before the 2012 parade, no one notified the railroad or posted officers at crossings with the specific responsibility of monitoring oncoming trains, according to the NTSB report.

“It was informally planned, so they couldn’t take into account all the possible hazards that could occur in their parade,” said Rafael Marshall, a senior project manager with NTSB.

At the time of the accident, Midland did not require organizers to notify railroads when parade routes traversed railroad crossings. NTSB also faulted the city for failing to enforce its parade ordinances by allowing the event to take place without a permit for four years.

For events held on an annual basis, not much might change from year to year. Requiring a written safety plan reduces the likelihood that planning will become lax, Marshall said.

ICMA is currently working with NTSB to develop a list of best practices for parades.

Christina Barberot, an ICMA public policy coordinator, said most of the municipalities she is working with are prepared and have plans in place, but there is currently not much standardization specific to parade policies. She expects to publish a report in early 2014.

The following map shows eight fatal parade accidents occurring in the U.S. over past three years. Incident information was compiled from news reports, so some events may not be listed.