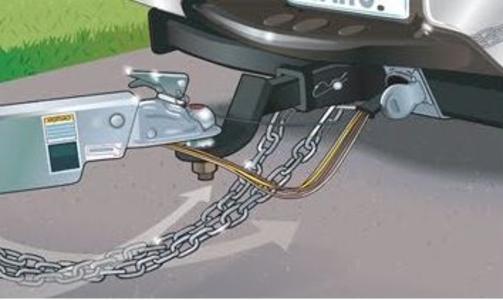 A new bill, signed by Georgia Gov. Nathan Deal, requires drivers to secure trailers to their vehicles with safety chains. The bill, which takes effect July 1, was prompted by the death of a young Fayette County mother who was killed last fall when a runaway trailer struck her vehicle.here.

Rep. John Yates advanced the trailer safety chain bill (HB 123) after Tiphanie Fletcher's mother visited him at the state Capitol. Fletcher was killed as a result of an unchained trailer slipping loose from the truck ball. The ball was later found to be the incorrect size for the trailer hitch.

"This law will require that all registered trailers, those with a license plate, be adequately and safely attached to the vehicle while being towed," said Frank Watson, the University of Georgia Extension coordinator in Wilkes County.

Watson said trailer owners must ensure their trailer has a safety chain or cable as a safety backup to the primary hitch connection. A trailer can be retrofitted with safety chains for about $50, he said.

"Commodity trailers, like peanut wagons or cotton wagons, are exempt," Watson said. "For the most part, people will need to retrofit older or homemade trailers with safety chains if they do not have them."

"There is certainly a safety issue with trailers that don't have safety chains," he said. "I daresay that the attorney for an injured party would show no mercy to someone whose trailer caused an accident that could have been prevented by safety chains."