Five years ago, Parker Reimer was a football center and a baseball catcher and spent every free minute playing outside.

Now the 16-year-old from Hudson, Wis., is recovering from two shoulder surgeries and can’t lift anything above his head with his left arm. He drives every other week to OSI Physical Therapy in Stillwater, where he works on weightlifting, stretching and resistance training.

Parker and his mother, Kelly Bridge, and older brother, Carter Reimer, were injured in 2013 when a go-kart driven by a Shriner at the Booster Days parade in downtown Hudson careened out of control and crashed into them.

“It has been really a struggle,” Parker said during an interview at the family’s house. “If (my brothers) are playing a game of basketball in the front yard, I have to sit out and watch because I can’t get my arm up to shoot a basketball. I can’t swing a bat. I can’t play football.

On July 6, 2013, the family went downtown to watch the Hudson High School marching band perform. Trevor Reimer, another of Parker’s older brothers, was playing bass drum in the band for the first time, and they camped out on the curb in front of Pudge’s Bar on the east side of Second Street to watch his debut.

As they were waiting for the band, eight members of the Zor Roadrunners, the St. Croix Valley Shrine Club’s go-kart unit, drove by in a synchronized routine. The men, dressed in red fez hats and white dress shirts, “were whipping around right in front of us,” Kelly Bridge said.

“I said: ‘You know what, guys? They look like they’re going really fast today. Let’s back up a little bit,’ ” she said.

According to police reports, the accident took place about 11:30 a.m. Milton Helmer, then 72, was driving the third go-kart in formation as the group made a U-turn in a single-file line.

Video footage shows the go-kart going up on two wheels and Helmer struggling to regain control. The go-kart then drives into a crowd of spectators on the sidewalk.

“He hit the accelerator instead of the brake and drove straight into us,” Bridge said. “He hit Carter and flipped him upside down, so his head went this way and his feet went that way. With Parker, it just landed on Parker and pushed him back. They were both completely under the go-kart.

“I had put my hand out to try and stop it, like you would in a car accident,” she said. “It was dragging me along. I was screaming, ‘Take your foot off the gas!’ ” 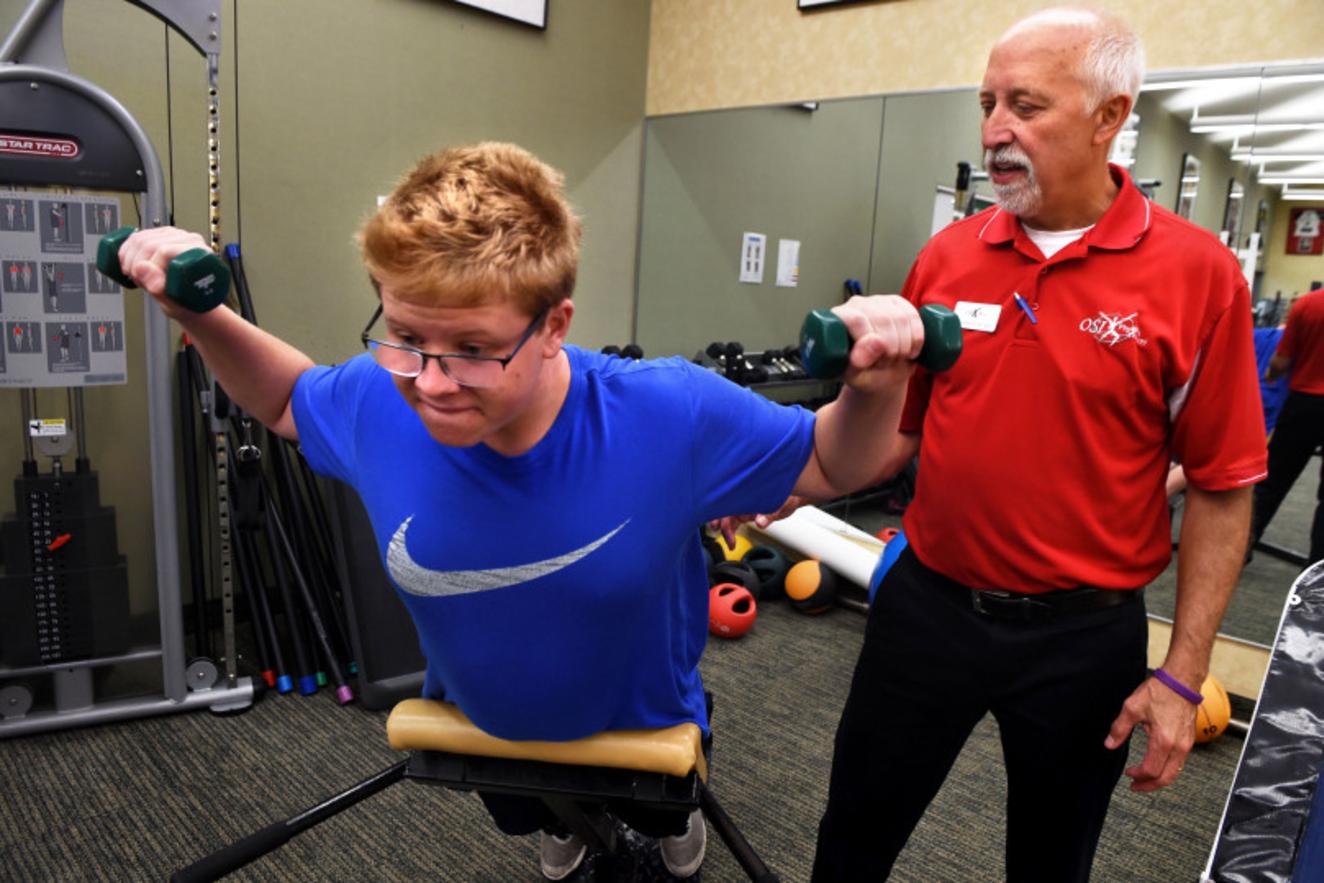 A man who had been watching the parade helped lift the go-kart off the boys, she said.

Police said it appeared as though the accident happened when Helmer took “corrective action” to avoid rolling his go-kart, and “it did not appear as though Helmer intentionally or recklessly left the roadway.”

Helmer told police that he had been a member of the Zor Roadrunners for several years.

“Helmer stated he didn’t remember what exactly happened and was very shaken up over the incident, continually asking how the injured persons were doing,” according to the police report. “(He) stated that he thought there were people in the road on the west side of Second Street, and he was unable to move far enough over to make an adequate turn in the roadway.”

Parker, who was 11, suffered the brunt of the injuries. Carter, who was 12, had a broken leg, a large hematoma in his leg and several bruises. Bridge’s right wrist and left knee were seriously injured, and she has had two surgeries.

In December 2017, Bridge sued the Shriners, Helmer and their insurance companies for medical expenses and additional damages in St. Croix County, Wis., Circuit Court. A pretrial hearing is scheduled for Oct. 16.

The Shriners last month offered to settle, but Bridge said the offer — $30,000 to cover Parker’s medical expenses and $40,000 to cover hers — was insufficient.

The Shriners raise money for 22 Shriners Hospitals for Children, which provide specialized care to children with orthopedic conditions, spinal-cord injuries, burns, and cleft lip and palate, regardless of the families’ ability to pay.

In a document filed in court, the Shriners denied many of the claims made in Bridge’s lawsuit, including a claim that the Shriners failed to provide adequate instruction and training before permitting Helmer to use and operate the go-kart.

Bridge’s attorney, Tom Weidner of Eckberg Lammers in Stillwater, said he was “surprised and disappointed” that the Shriners were not accepting responsibility for the accident.

Bridge, a single mother and a kindergarten teacher at Eagle Point Elementary School in Oakdale, said she had hoped to avoid taking the Shriners to court.

“They said, ‘We’ll cover it at the end,’ but they’re not covering it at the end,” she said. “I didn’t want to throw the Shriners under the bus … because I think they stand for a good cause, but after dealing with them on this, I have definitely seen that actions speak louder than words.”

The go-kart landed on Bridge’s purse, and the family’s three cellphones were shattered, she said.

“They never paid to replace those,” she said.

No one from the Shriners checked on the family after the accident, she said.

“I’m still so baffled by that,” she said. “No one came to check; no one apologized. The driver never even got out of the go-kart.”

The Bridge-Reimer family is a football family. They got into the sport because Trevor has albinism — a lack of pigmentation in the skin, hair and eyes — and is visually impaired.

Parker Reimer, right and his older brother, Carter Reimer, are seen in a photo from around their time they and their mother, Kelly Bridge, were injured when a go-kart driven by a Shriner careened out of control and crashed into them at a Hudson parade. (Courtesy of Kelly Bridge)

“Football was one of the only sports that he could play,” Bridge said. “We tried it, and everybody ended up liking it.”

The boys started playing flag football when they were 5 and moved to tackle when they got to third grade.

Trevor, 19, now plays center for the University of Wisconsin-River Falls, where he is a sophomore majoring in social work. Carter, 17, a senior at Hudson High School, is captain of the school’s football team.

Parker, a junior at the high school, was “my most athletic by far, and the one who spent the most time outside,” Bridge said.

“He has never been a video-game kid,” Bridge said. “He went from being outside all the time to being inside all the time. Losing football and weightlifting was a very emotional loss. He became really introverted. It has been heartbreaking to watch.”

Said Parker: “I didn’t really get a chance to see how good I would be.”

Parker had to wear a shoulder brace for the first year after the accident.

Instead of playing with friends after school, he said, he had to go home to rest. “Getting through the school day was a struggle,” he said. “I was in constant pain, and I just wanted to sit at home and try and get rid of the pain for a little bit.”

He had two surgeries — one in October 2017 and one in January — and missed 34 days of school last year.

“It would have been better to wait until he was older to have the surgery, but everything was just stretched too far out,” Bridge said. “His shoulder would pop out of place, and he would have to pop it back in. It’s kind of a crapshoot because we don’t know how much more he’ll grow.”

He is limited to lifting just one pound in front of him and 10 pounds on the side.

“Things like water-skiing or tubing are off-limits,” Bridge said. “He can’t do any pulling on that arm. It would just pull and slip, and we’d be back to square one. That is for the rest of his life. No contact sports.”

Kelly Bridge is seen with her sons, from left, Carter, Parker and Trevor Reimer in an undated family photograph. Bridge, Carter and Parker were injured in 2013 when a go-kart driven by a Shriner at the Booster Days parade in downtown Hudson careered out of control and crashed into them. (Courtesy of Kelly Bridge)

Parker said he has been feeling better since his last operation. He has taken up bass fishing. He and friends go to the St. Croix River, Lake Mallalieu in North Hudson or to a private lake owned by a friend, he said.

Football season is hard for him, Bridge said.

“It’s just a lot of the fun stuff, the camaraderie, he misses that,” she said. “It is what it is, we can’t change it, but it’s a hard season for him to get through, especially with both brothers playing. Watching him watch … that is hard.”

Parker tried running cross-country, “but it’s pretty boring,” he said. “It’s, like, how can people do this?”

He also tried playing drums in the marching band, but his limited mobility was a hindrance.

Now, he’s working on relearning magic tricks — a hobby since before the accident — and trying piano again.

She takes six Advil a day for the pain.

The accident left her unable to perform household chores like scrubbing the kitchen floor or changing the beds, she said. Cooking dinner is a struggle.

“My right arm gets so fatigued and so worn out,” she said. “Washing my hair, I mean it sounds ridiculous, but it takes everything out of me. It brings me to tears.”

She said bills for Parker’s surgeries are still coming in, and co-pays are owed for his physical therapy appointments.

“I cannot afford any more,” she said.

This is not a freak....accident.

No National Safety Standard for parades

This Organization has run into people before in other parades

This Organization is responsible

They did not get the message....the lawsuits might convince them otherwise to call us

Somebody needs to hold this unsafe parade operations and organizations responsible

Under the watchful eye of therapist Mike Ripley, Parker Reimer uses weights to strengthen his rhomboid muscles at OSI Physical Therapy in Stillwater on Tuesday, Aug. 28, 2018. Reimer's left shoulder was injured in 2013 when a go-kart driven by a Shriner at the Booster Days parade in downtown Hudson careered out of control and crashed into he and his family. Reimer had shoulder surgery in October 2017 and again in January 2018, and continues to work on extending his range of motion and strengthening the shoulder area. (Scott Takushi / Pioneer Press)