ASHEBORO — Tim Stevens drove tractor-trailers for a living and insisted that his rigs be the best and safest on the road.

He was killed because someone else did not take responsibility for their equipment.

On Nov. 14, 2014, Stevens was driving home from work on U.S. 311 in his “pride and joy,” a bright red Chevy 1500 pickup. At the same time, a Dodge dually pickup pulling a gooseneck trailer loaded with an excavator and wood chipper was headed in the opposite direction.

The owner and the driver of the rig were not as careful about safety, knowing that the brakes on the trailer were inoperable but neglecting to fix them. Added to the mix was the fact that the driver had a suspended license, but he chose to drive anyway.

As the Dodge and trailer headed south on U.S. 311, traffic ahead was stopped while another vehicle waited to make a left-hand turn at the Sophia Post Office. The Dodge driver slammed on brakes, but the weight of the trailer, which had no brakes, kept it from stopping.

The driver crossed the centerline to avoid piling into the line of traffic, but Stevens’ red Chevy was northbound coming directly at the Dodge. The two trucks collided head-on.

The Dodge driver, spared of serious injury, chose to leave the scene. Stevens had no choice, his injuries leaving him paralyzed. Seven weeks later, he was dead.

This is but one example of how defective, sometimes runaway, trailers can be time bombs on the highway. On Aug. 28 of this year on N.C. 49 south of Asheboro, a tractor-trailer ran head-on into a runaway trailer that had become separated from the truck pulling it.

Although there were no injuries in the accident, one can only imagine the result had the trailer slammed into a passenger car. Nevertheless, damages to the tractor-trailer were estimated at $15,000.

The driver of the truck pulling the trailer was charged with failure to secure load.

N.C. Highway Patrol records show that a similar scenario took place in December 2015, but the result was much worse. In Pender County, northwest of Wilmington, a GMC Yukon was pulling a utility trailer north on N.C. 11 near the Cape Fear River bridge. The trailer came loose at the bridge and veered into the southbound lane.

A southbound logging truck struck the utility trailer, then careened into the bridge railing, rupturing the fuel tank and catching on fire. The collision caused the logs to come loose, striking still another truck.

According to statistics from the National Highway Traffic Safety Administration, between 1975 and 2015, there were 361 fatalities in North Carolina due to crashes involving a passenger vehicle with a trailing unit. Nationwide, the figure was 17,903.

You can quote statistics, damage estimates and legal penalties (Stevens’ offender was sentenced to a minimum of 33 months to a maximum of 49 months in prison), but the human toll from defective and runaway trailers can’t be quantified. Grief can’t be measured nor can broken lives be gauged.

You can only listen to the grieving family members and hope they find solace in memories. The Stevens family gathered into a meeting room at the courthouse immediately after the man convicted for his negligence in the accident was sentenced.

“I just don’t feel like living anymore,” said Janet Stevens, Tim’s wife and soulmate. They had loved hiking and camping together. “Sometimes when I’m alone, there’s this feeling of loneliness. The family feeling is not there. You don’t know until you’re in my situation, when you’ve lost a spouse.”

“Dad was the backbone of our family,” older daughter Danielle Stevens Williams saidf.

It was Danielle who spoke on behalf of the family during the sentencing hearing of the trial. She told the judge that her mother “was affected the most. After his death, she depends on us and meds to get by. She can’t do the things she and my dad did together.”

Williams added that she and her sister, Jennifer Stevens, also depended on their father for so much.

“Dad never met the man my sister will marry or they children they’ll have,” Williams said, referencing Jennifer’s fiance, Robert Campbell. “My dad was my backbone. I could talk to him about things I couldn’t talk to anyone else about.

“My family has been ruined,” Danielle told the court. “I can’t ask him a question I have. I can’t knock on heaven’s door to celebrate his birthday with him.”

Looking at the defendant, Danielle said, “You can return home one day. My father won’t.”

Although Tim held on for seven weeks in his hospital room, he was unable to speak beyond the first day.

Janet recalled his words to her that first day in the hospital: “He said (when he saw the collision about to happen), ‘Oh Lord, this is going to hurt.’ ”

Mark Sams, Tim’s best friend from childhood, now lives in Ohio but comes to the Piedmont often on business. He was at Tim’s bedside during the ordeal.

“The doctors said Tim was a quadriplegic and would have been from then on,” Sams said. “He was mentally aware but couldn’t move.”

Mark talked about the man Tim was. “He did what he did for the family, Tim and Janet did for each other.

“You go through life with acquaintances but not many true friends. Tim was a true friend that I will never have back. That’s the human side of the story.”

“He was known as Mr. Fixit Man,” Jennifer said. “He could fix anything.”

Mark added, “Tim would do anything for anyone. He was very compassionate and trustworthy. He took care of his neighbors and would watch their places while they were on vacation.”

“He was very dependable,” Danielle said. “People called him if they needed something.”

“He would stop whatever he was doing to help,” Jennifer said. “He taught us daughters how to be self-supporting women.”

Both sides of the spectrum

Jennifer’s fiance, Robert, drives trailers on his job. He explained his routine before ever getting into the driver’s seat: “I hook up the trailer, then do a walk-around to check the tires, the lights and wiring, make sure the load is secure and the brakes are working. Those steps were not done (with the defective trailer prior to the accident).”

Robert said that according to state law, the braking capacity of a trailer must be able to stop the weight of its load. Obviously, the faulty trailer that resulted in Tim’s death failed to meet that guideline.

“His death should not have happened,” Mark said. “The accident should have never happened. If anyone had taken responsibility (for the trailer’s condition), the accident would never have happened.

“Tim knew trucks and brakes,” Mark continued. “He required his tractor and trailer to be the best on the road. On the other side, the company (that owned the faulty trailer) did not take responsibility for the employees or the equipment.

“You have both sides of the spectrum. That’s a nutshell summation of why we’re here today.”

Robert said that since Tim’s death there has been “a palpable void for the family — for no reason whatsoever.”

The National Association of Trailer Manufacturers offers this safety checklist to use prior to departing:

* Before driving, make sure your vehicle maintenance and trailer maintenance are current. This is very important because towing puts additional stress on the tow vehicle.

* Check and correct tire pressure on the tow vehicle and trailer, including the spare tire.

* Make sure the wheel lug nuts/bolts on the tow vehicle and trailer are tightened to the correct torque.

* Be sure the hitch, coupler, drawbar and other equipment that connect the trailer and the tow vehicle are properly secured and adjusted.

* Make sure the safety chains are properly criss-crossed and connected, not touching the road but with enough slack to make turns.

* Check that the wiring is properly connected, not touching the road, but loose enough to make turns without disconnecting or damaging the wires.

* Verify that the brakes on the tow vehicle and trailer are operating correctly.

* Ensure the breakaway system lanyard is connected to the tow vehicle but not to the safety chains or ball mount.

* Check that all items are securely fastened on and in the trailer.

* Be sure the trailer jack, tongue support and any attached stabilizers are raised and locked in place.

* Check load distribution to make sure the tow vehicle and trailer are properly balanced front to back and side to side.

* Check side- and rear-view mirrors to make sure you have good visibility.

* Check routes and restrictions on bridges and tunnels.

* Make sure you have wheel chocks and jack stands.

* Match the gross vehicle weight rating (GVWR) of your tow vehicle with the gross trailer weight (GTW) of the trailer you want to tow. If the GTW exceeds 50 percent of the GVWR, a trailer sway or even a wreck could happen.

* Invest in a weight distribution hitch system. It will spread trailer hitch weight evenly across all vehicle and trailer axles.

— Maintain a safe speed on descents.

— Downshift into lower gears to slow down.

— If sway occurs, manually use the trailer brake controller to slow down. Trying to brake with your tow vehicle usually makes the problem worse.

* Watch weather reports. Here’s what to do in high winds:

— If the trailer starts feeling unsteady, do not apply the brakes.

— Take your foot off the accelerator.

— Keep a firm grip on the steering wheel.

— Steer straight until you’re through the wind.

Focus: Defective and runaway trailers can be the death of you

And I will add

Focus: Defective and runaway trailers can and will be the death of you, horses and animials

Note All Trailers Are Built To A "Voluntary Standard"  Set  up by the Trailer Companies. 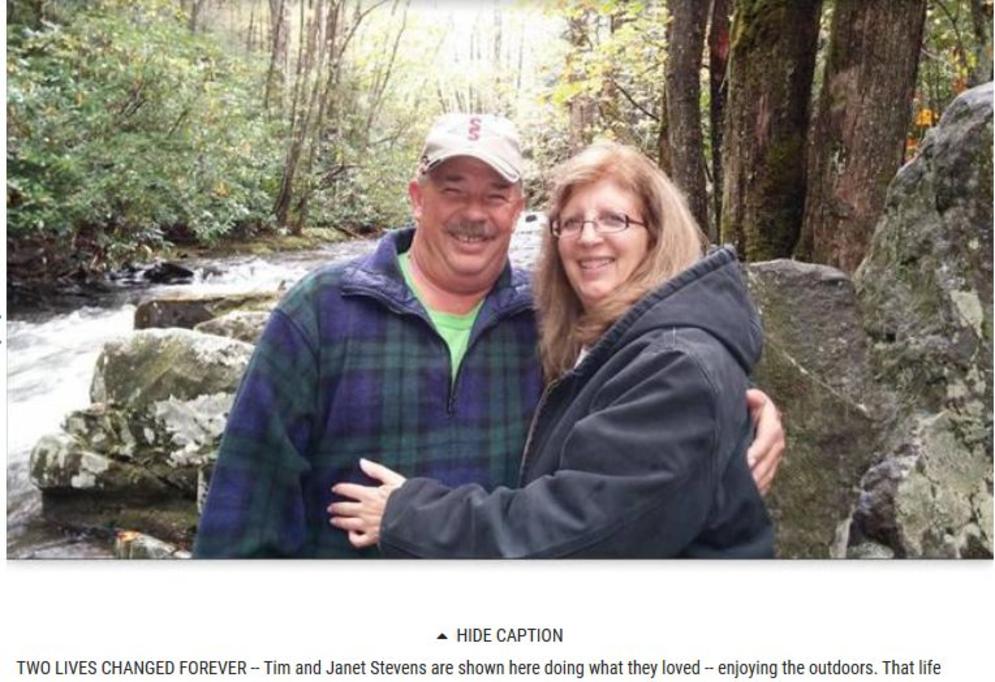 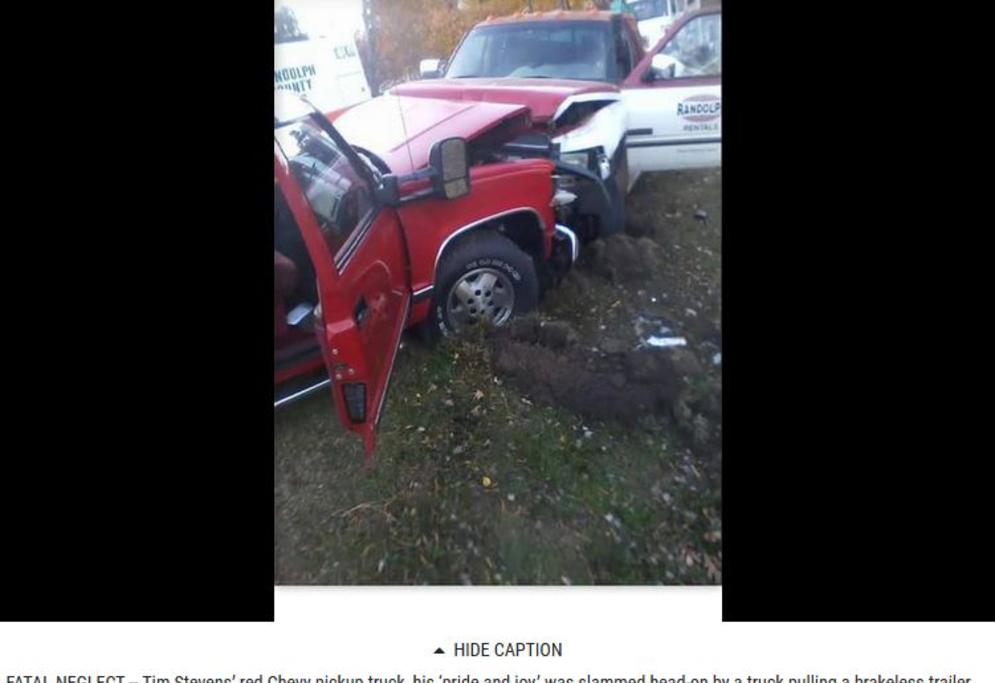