Another Farmer Towing A Trailer And Kills A Horse And Once Again
Nobody Cares!

Over 1,500 Horses are killed every year now by a Passenger Vehicle Towing A Trailer!   We expose the total disregard for not only human life but for horses and large annimials. 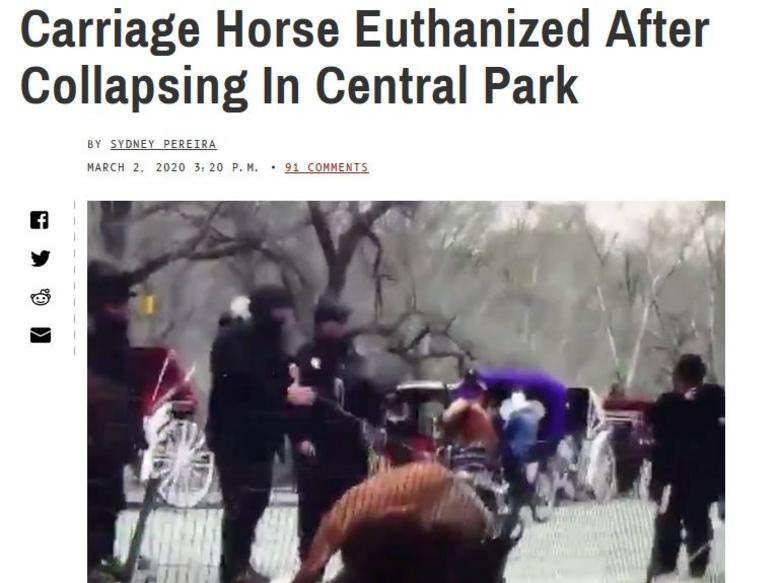 A carriage horse was euthanized shortly after she collapsed in Central Park on Saturday. A video that circulated on social media over the weekend shows the horse struggling to stand on her hind legs in Central Park Saturday afternoon. The dramatic footage, posted by New Yorkers for Clean, Livable, and Safe Streets [NYCLASS], has since spurred an NYPD investigation and protest.

"It's just heartbreaking looking at that footage," Edita Birnkrant, the executive director of NYCLASS, told Gothamist.

The 12-year-old mare, Aisha, was euthanized after she was unable to stand back up due to what the horse carriage owners suspect to be a "cardiac event," according to Historic Horse-Drawn Carriages of Central Park's spokesperson Christina Hansen. The carriage horse community said Aisha's death came with "tremendous shock and sadness," Hansen said in a statement Sunday morning.

The horse first showed "signs of distress" about 12:30 p.m. Saturday after one ride and standing for about 1.5 hours at the Seventh Avenue carriage stand, Hansen said. An emergency horse trailer and veterinarian were called, and the horse was unharnessed and taken back to her stable in the trailer, where the vet began treatment within an hour.

She "progressively and rapidly weakened in her hind end and unexpectedly collapsed," according to Hansen. She was unable to stand back up, and the owner and vet chose to put her to sleep Saturday evening.

EMERGENCY: Disturbing footage from today shows a NYC carriage horse violently collapsing over and over while struggling to get up! The horse is from Clinton Park stables. We are gethering more info. Horse looks in critically bad shape. pic.twitter.com/naWwAuyf7l

A second video posted by NYCLASS shows the horse being loaded into a horse trailer, which Birnkrant believes shows a carriage horse driver purposefully blowing cigarette smoke into the horse's face. (Hansen called that a "bizarre assertion.") NYCLASS held a "die-in" Sunday at Central Park, where about 150 protesters showed up, according to the group.

💔This brutal video shows carriage drivers purposely blowing smoke into downed carriage horse Aisha’s face and her flipping over in terror. There is 17 minutes more of footage like this. Aisha was brutalized. Now she’s dead. Animal cruelty charges need to be filed. @NYPDPaws pic.twitter.com/JZhsWuQ4ML

"The video of a horse collapsing and dying in Central Park yesterday is painful and says so much about a persistent problem," he wrote in a tweet.

The video of a horse collapsing and dying in Central Park yesterday is painful and says so much about a persistent problem.

We’ve made real progress in animal welfare but we must go further. The NYPD’s Animal Cruelty Investigation Squad is on the case and WILL get answers.

"We are blown away that this is what is happening today in New York City...This is something that's called tourism? This kind of brutalizing and abuse of animals? This has to end," Birnkrant said. "We should shut down this industry right now, pending a full investigation into the out of control abuse and mistreatment that is going on."

Hansen said the medical episode could have happened to any horse, arguing that because Aisha was a carriage horse, she was able to receive "immediate attention" from expert care.

"Animal rights extremists are already exploiting this tragedy to further their anti-horse agenda during our time of grief and shock," Hansen said in a statement. "This medical emergency appears to be something that could happen to any horse, any time, anywhere, for any number of reasons, under a wide variety of conditions." She told Gothamist NYCLASS's "mission is to destroy the carriage horses, however they can" and "dehumanize carriage drivers."

The horse's bloodwork is expected be returned Tuesday, and tissue biopsies that the city's Department of Health took are expected to be returned in the coming days, according to Hansen. Lab work will be given to the DOH, whose veterinarians investigate health incidents involving horses.

"Our condolences most of all to Aisha's owner, drivers and friends who knew her," Hansen said.

There should be an immediate investigation into what happened to this horse and the cause of death.

This video is painful to watch and the public deserves answers. https://t.co/9NKvqWJgv8

Absolutely heartbreaking to watch the video of a horse suffering and dying in Central Park.

How we treat our animals is a measure of our decency—this tragic incident must be fully investigated.

NYCLASS, which was under investigation for its donations to de Blasio's defunct non-profit back in 2016, has been fighting for various industry regulations for the horses but has also supported an outright ban on the carriage horse industry. The industry became a flashpoint in New York City politics after de Blasio originally promised to ban carriage horses during his 2013 campaign. He eventually supported rules to instead reduce the number of horses in New York City and limit them to Central Park.

See The 3 Blood Lines And Know 3 Horses Fell Through The Floor
And Were Dragged To Death And Nobody Cares!
View on Mobile