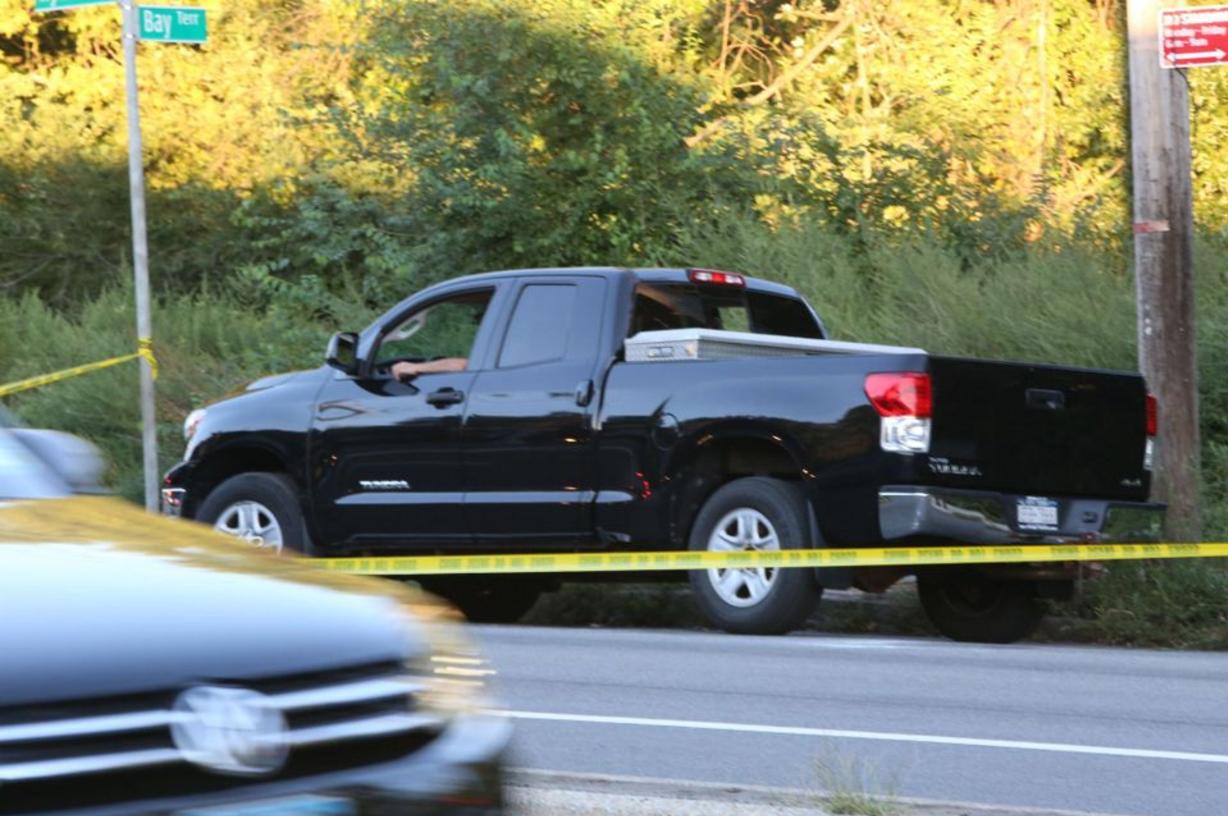 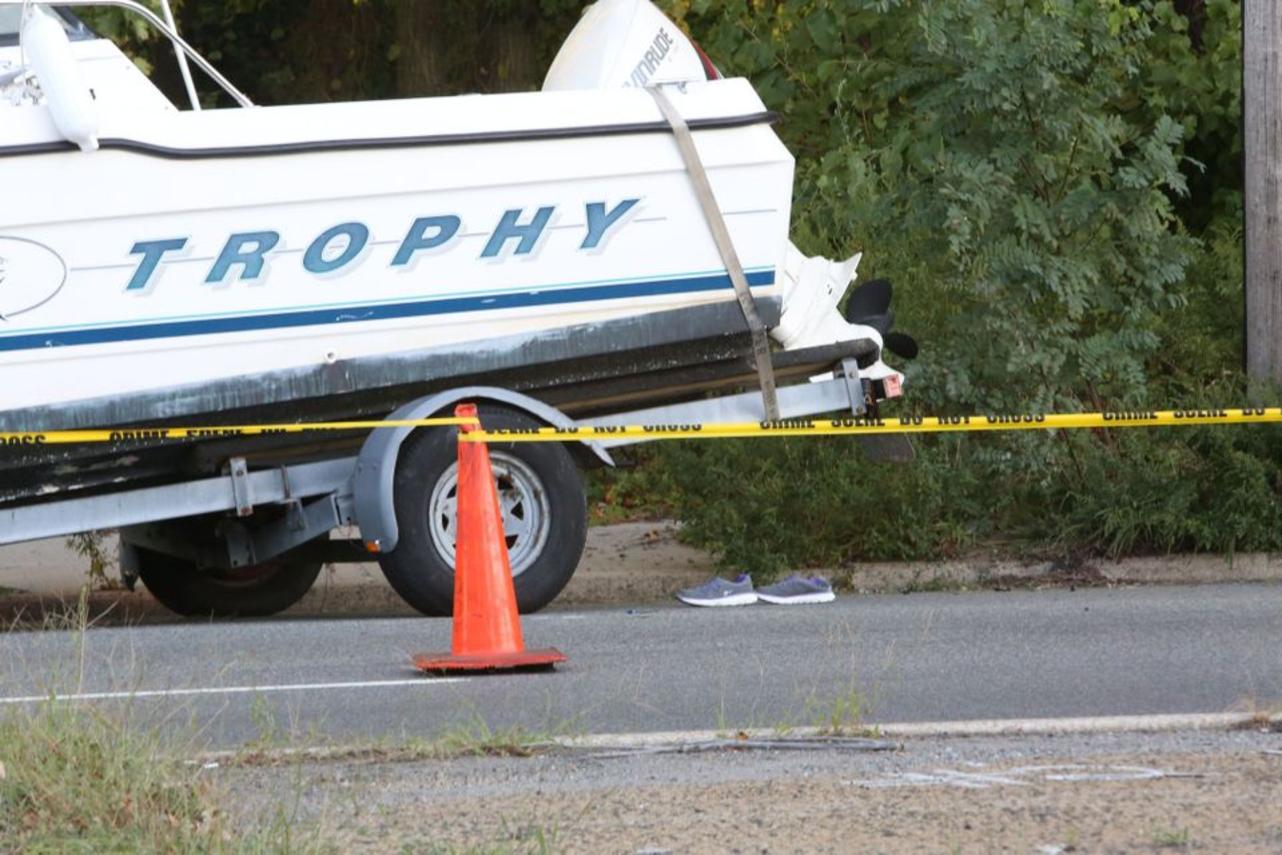 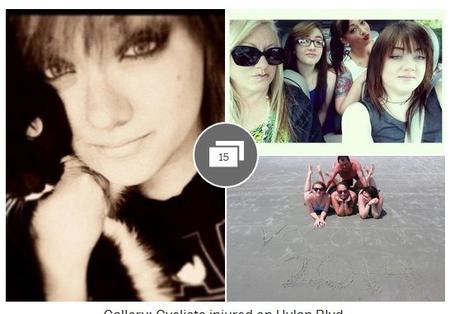 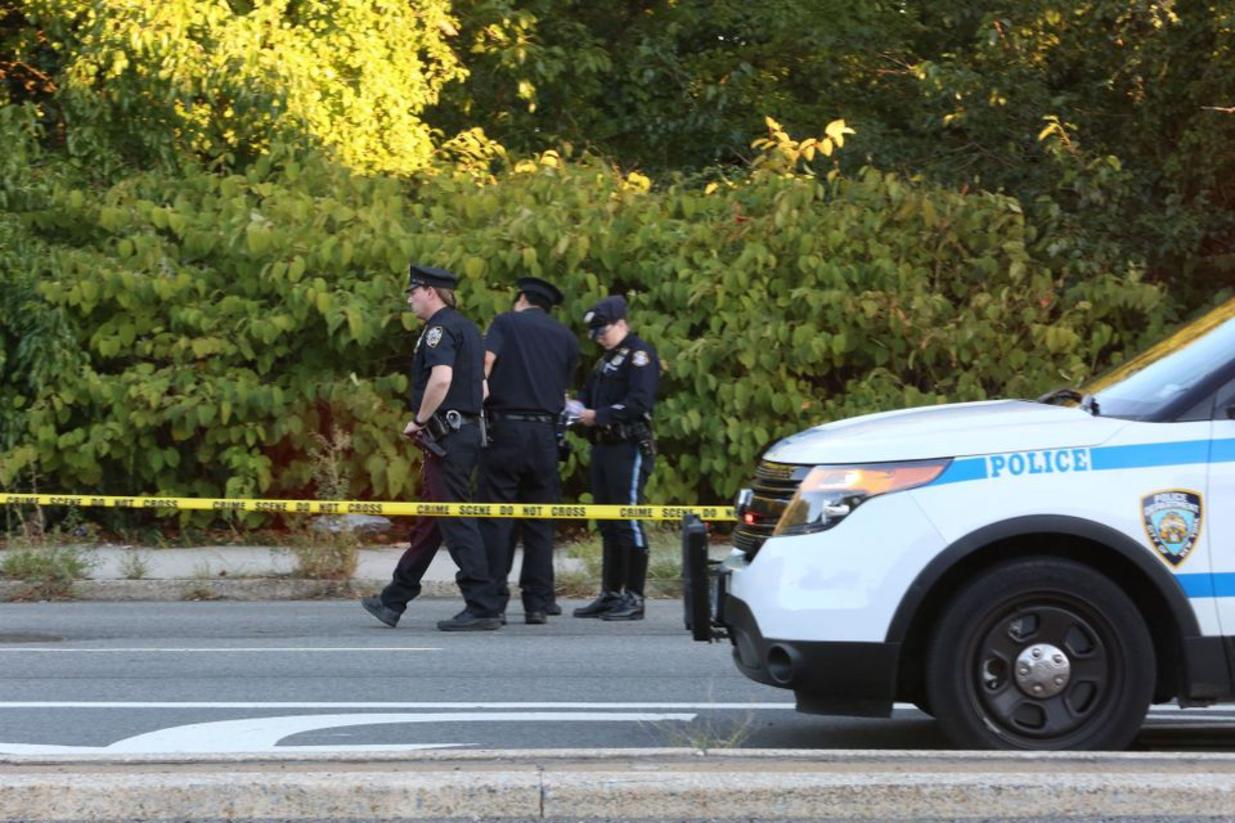 Everyone is on notice:  Yes we are seeking mandatory jail time if you tow a "homemade" trailer or a commercially built trailer and you..fail to secure it....the hitch breaks, the rim and tire comes off, the safety chains break and your trailer kills other people you the offender  must be charged with "Negligent Homicide" Nation wide....that is what Brian's Law Is.....going to be.

This is the only way to get people who tow to change their behavior is to have a Nationwide Sentence because a loose flying trailer should not come at you like a missile and destroy your family without consequence. 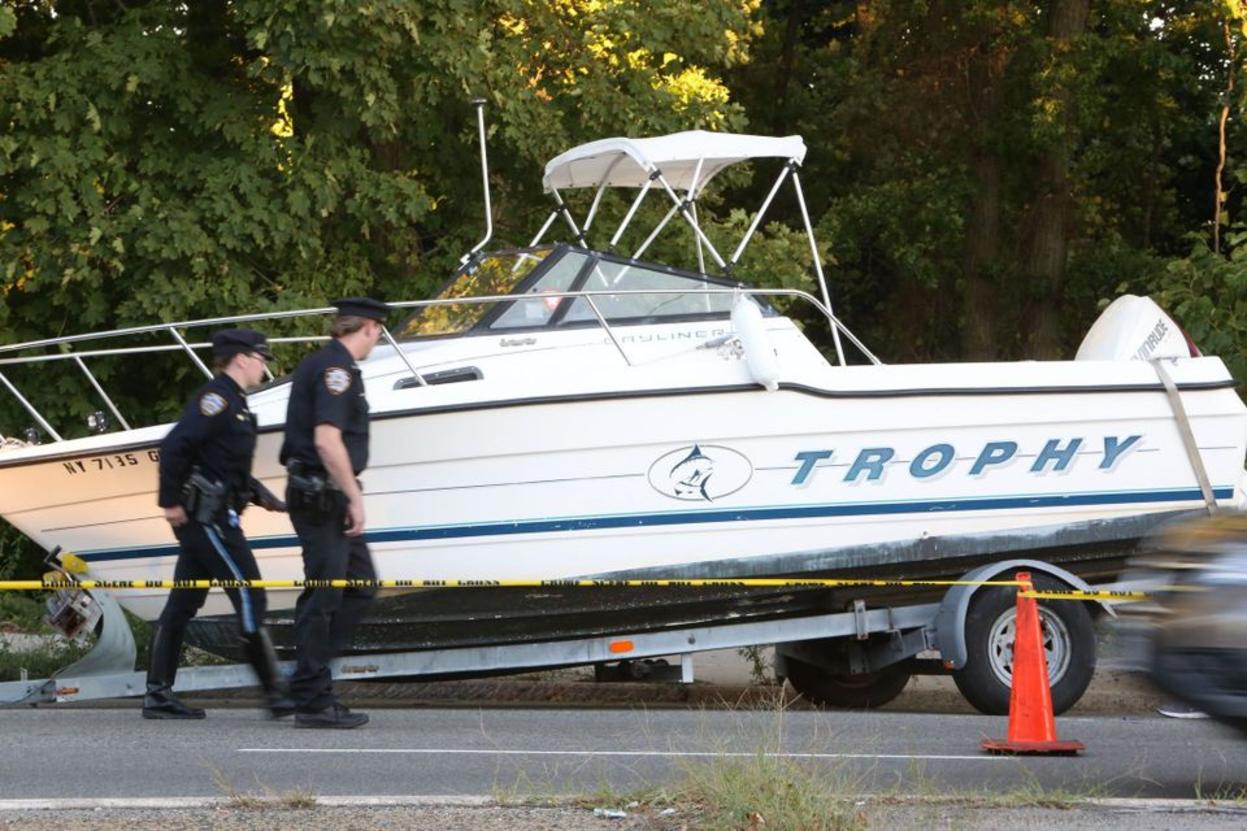 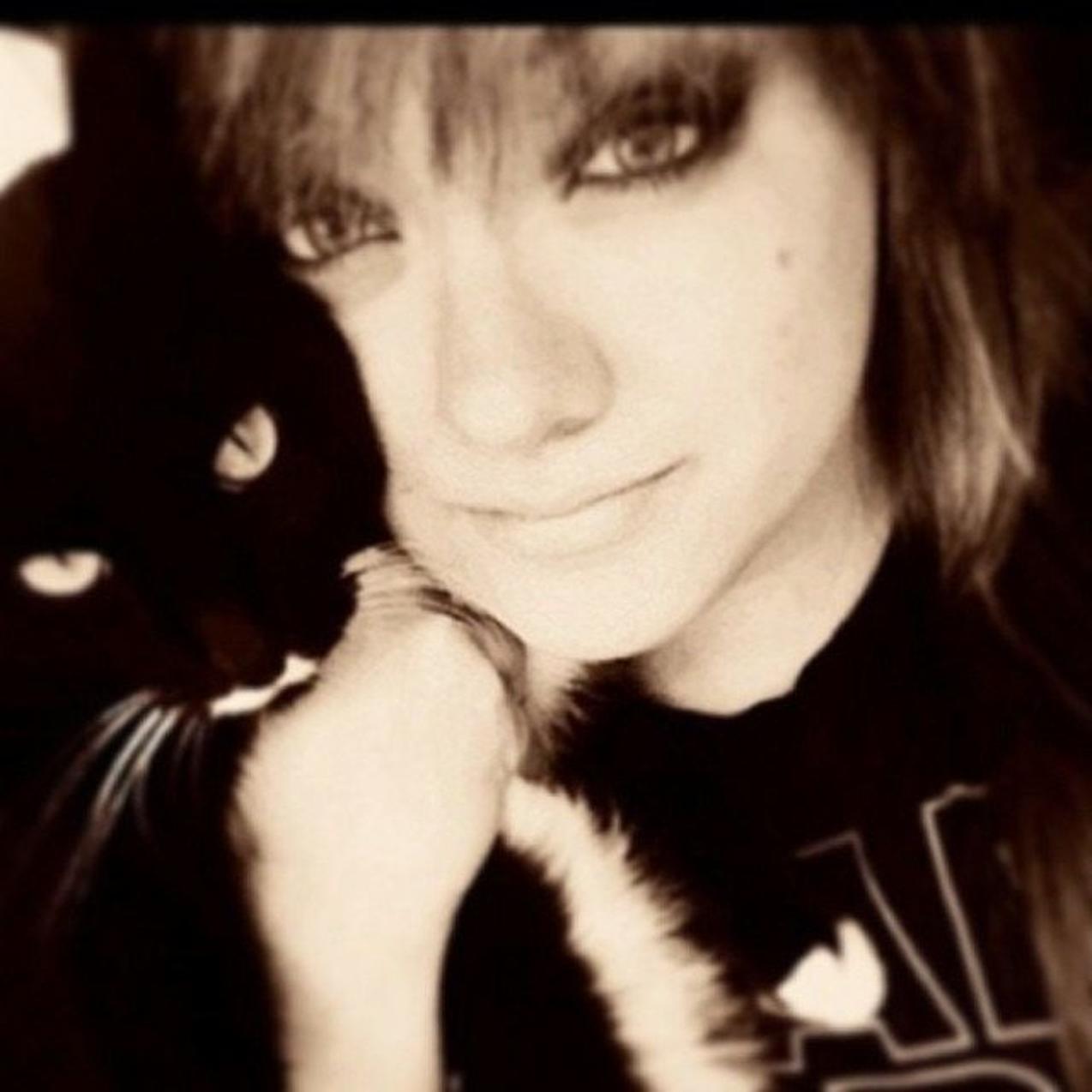 Cyclists injured on Hylan Blvd.
Police investigate the scene at Hylan Boulevard and Bay Terrace, where sources say a boat detached from the back of a pickup truck and struck two women riding bicycles, seriously injuring them. (Staten Island Advance/Ryan Lavi

Read below also note that the DA did not know about the Federal Law....Every Trailer Over 3,000 GVWR Must have a secondary breaking system....The Trailer Manufacturer produced a trailer and sold the trailer to the consumer in Violation Of Federal Law!  Massive Lawsuit against the company that was never filed.  Why?  If the owner had it inspected the inspection station would have captured the missing breaks!  Who is in charge to ensure this gets done?

Why is a company selling a trailer that will carry a boat over 3,000 GVWR without breaks...and placing stickers knowing that it would cost thousand dollars to put breaks on the trailer after?

Do trailers need to be inspected in NY?
Yes. Your trailer must have an annual safety inspection. A DMV-licensed inspection station that inspects passenger vehicles and other light-duty vehicles can inspect a trailer. ... Carry the inspection sticker in the vehicle that tows the trailer.

Also Boat trailers in New York must be inspected every year.

STATEN ISLAND, N.Y. -- It was supposed to be a joyful afternoon of riding bikes and spending time with friends.

But instead, it turned out to be a day of tragedy and immense heartbreak when a boat broke loose from the SUV towing it along Hylan Boulevard in Bay Terrace on Sept. 14, 2015, and slammed into Alexa Cioffi, 21, fatally injuring her and badly injuring Briana Emanuele, her best friend, who was cycling with her.

"For the longest time, I blamed myself for this terrible crime I did not commit," Emanuele, 24, said Wednesday fighting back tears in a courtroom packed with Cioffi's sobbing family and friends. "I wished it was me instead of Alexa. She did not deserve this."

"I feel so terrible, survivor's guilt," Emanuele continued, as the defendant, Michael Khmil, who pleaded guilty in September to criminally negligent homicide stood with his head bowed at the defense table in state Supreme Court. St. George. "It's an unimaginable pain. I struggle every day. The thing that kills me the most is that we were just riding bikes to meet our friends and have a fun day at the park."

Moments before Khmil, 44, was sentenced to 60 days in jail and five years' probation under a plea agreement, Dawn Bartkowski, a longtime friend of Cioffi's family, spoke of the immeasurable sorrow and loss those who knew the late Eltingville resident struggle with every day.

[In touching message to court, friend of boat-crash victim describes grief as 'tsunami']

In touching message to court, friend of boat-crash victim describes grief as 'tsunami'

Michael Khmil was sentenced to 60 days in jail, 5 years probation.

"Grief, as we have all heard, comes in waves. Her family says that's a lie," said Bartkowski, who said she was like a second mother to the victim. "These aren't waves; they are tsunamis or gargantuan freight trains that ram into your very soul from nowhere. ... It feels as if someone has sucked out everything you have - your guts, your heart, your oxygen, your entire being.

"And you never know when that tsunami or train will hit you again, and you live in fear of that."

Khmil, a tall man with short salt-and-pepper hair, who was garbed in a gray Hollister hoodie, blue jeans and sneakers, did not address the court.

But his lawyer Igor Litvak said the Prince's Bay resident wanted to "express his deepest condolences" to the victims' families and friends.

"He wishes it did not happen. He did not mean for it to happen," said Litvak. "This is a tragic accident."

Prosecutors said Cioffi was fatally struck as she and Emanuele, of Prince's Bay, were riding their bikes on Hylan Boulevard northbound toward New Dorp.

A police investigation determined Khmil was driving a 2015 Toyota SUV northbound on Hylan with a boat in tow during the evening rush hour around 5 p.m.

As the SUV switched lanes, its trailer became detached and continued to travel north into the right lane, striking Emanuele, said police. The boat was propelled north, hitting Cioffi who became pinned, said police. Khmil remained on the scene.

Cioffi and Emanuele were riding to meet with Cioffi's sister, Jillian, now 30, and some of their friends on their bicycles in Great Kills Park.

Khmil was indicted in April of last year, seven months after the incident and following an extensive investigation. He was arraigned in May 2016.

As a result, the trailer detached from Khmil's SUV and struck Cioffi and Emanuele while traveling at a speed exceeding 20 miles per hour, the indictment alleged.

Besides criminally negligent homicide, the defendant was charged with manslaughter, a higher felony count, and misdemeanor counts of assault and reckless endangerment.

Under state law, criminal negligence means a person fails to perceive his actions will cause a "substantial and unjustifiable risk" or that such a circumstance exists.

The nature and degree of the risk must be such that the individual's failure to perceive it grossly deviates from the standard of care a reasonable person would manifest in a similar situation.

Assistant District Attorney Mark Palladino told the court then the plea offer and sentence represented a "fair disposition." He said they were based on Khmil's lack of a criminal record, his conduct on the scene and recent pretrial rulings.

Palladino also said he had discussed the offer with the victim's family.

In her victim-impact statement to the court, Bartkowski called Cioffi "the true personification of all that is good in this life."

Loving, compassionate, and empathetic, she dreamed of becoming a lawyer to fight for justice and stick up for the underdog, said Bartkowski.

"She wanted to make the world a better place, and we lost someone great who was going to make a positive impact on the world," Bartkowski said, who called Cioffi's death "a senseless and avoidable tragedy."

"The loss of Alexa is beyond words and truly overwhelming," she said.

"It's been a very long road," Diane Cioffi said through tears. "But at least we got some minimal justice for Alexa."