ust a week and a half after members of the Chattahooligans reported their trailer stolen, authorities say someone returned it.

This after Chattanooga police arrested and charged two suspects, Aaron Chippoletti and Erika Mays, with theft over $10,000.

READ MORE | UPDATE: Suspects accused of stealing trailer from Chattahooligans arrested Follow this story to get email or text alerts from WRCB when there is a future article following this storyline.
Follow this story

That 'someone' was the person who bought it from the suspects. CFC fan club member Andrew Bresee says they were told the man found out it was stolen after he purchased it and decided to give it back.

"We are so incredibly grateful and it really just returned some of that faith in humanity," Bresee told Channel 3.

He says that faith was lost after the trailer that was valued at nearly $20,000 went missing.

"We had grills and tables and chairs and merchandise that we use that we  sell to fund the food that we have at our tailgates...and the banners we use to support the team," he said.

It was one of two trailers that have been stolen already this year according to Chattanooga Police.

"Trailers are very difficult to track here because the VIN numbers are very easy to remove and they're not always registered through the DMV here in the State of Tennessee, so it's hard to track them down," Investigator Nick Hayes with CPD Property Crimes explained.

The group's trailer was only one of a few to actually be returned.

"It's not very often that people are returning stolen things to us," Hayes said.

So when Bresee says they were notified by police that the person who purchased it called it in, they were both relieved and surprised.

"When you get it back out of the goodness of someone's heart? The person who returned it had purchased it, figured out it was stolen and then turned it in. They didn't have to do that," he said.

More than anything, they were thankful to both police and the community for helping recover at least some of what was taken.

Hayes  says people who own trailers should keep them in areas that wouldn't be easy for thieves to access.

He also told Channel 3 there are special 'tongue locks' you can buy to prevent another car from hooking a trailer up.

The biggest recommendation CPD Property Crimes made to residents who own trailers is marking the trailer in an obscure location so authorities can easily identify if it's found.


In 1971 J. Standard Baker Quoted " Drivers Towing Trailers  Are Four (4) Times As Unsafe As Those In Cars Alone! 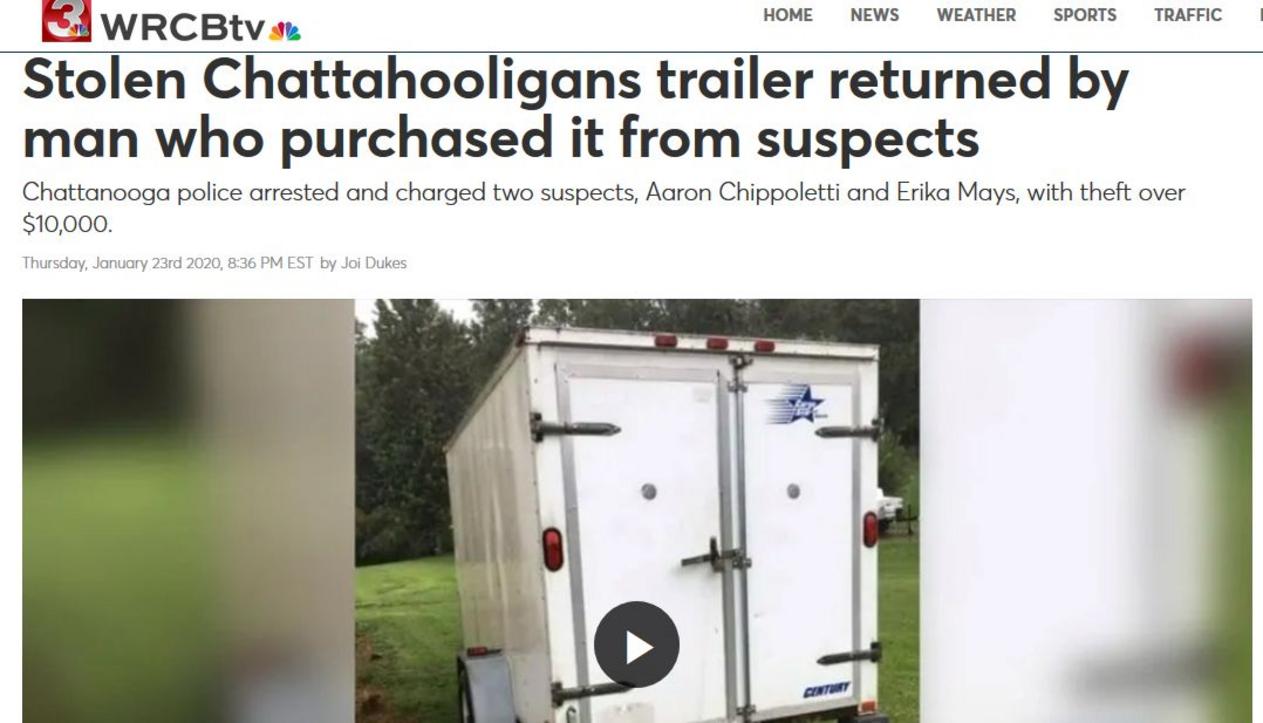 The Law Group Of Tenagilia & Hunt does not care or fully comprehend the efforts of our cause.  They refuse to work with  our cause and on Monday I will make a final stand in court and expose the personnel sacrifice to support our various causes.

Because of this law group and our very own government this will happen in 2020.

Over 500 men, women and children will be killed by a passenger vehicle towing a trailer.

Over 4,000 horses or large animals being towed in unsafe trailers will be killed.

Over 25 Children Or Adults will be killed on unsafe parades or hayrides.

Over 100 will be killed the highest percentages of any vehicle class by seniors who are driving RV's that are bigger than a firetruck towing a car or even a trailer with a ordinary "CAR" License!

And all we get for our efforts is financial distress and the inability to secure critical financing to continue our efforts.

The media has a black list on our cause as to not to tell their viewers how bad it is.