Republican State Senator David Sater told The Associated Press he was awaiting the results of the federal investigation into the accident but promised that “this issue will not get dropped.”

The pledge from Sater came on the same day crews recovered the Ride the Ducks boat from 80 feet of murky lake water near the tourist town of Branson.

As the vessel broke the surface mid-morning on Monday, two small Americans flags remained on the front. Unused orange life jackets dangled from the frame of the boat as a haunting reminder of the chain of events that occurred five days ago.

After pulling the duck boat out of the water, investigators with the National Transportation Safety Board took custody of it.

It is not clear how long the investigation will take but similar ones have taken up to a year.

Kelly and Bob Ivers, who are visiting friends in nearby Hollister, Mo., were among a handful of residents and tourists who watched a crane attached to a barge pull the broken boat from the lake.

“I wanted to go by the Ducks office location too but I couldn’t bring myself to drive past it,” Kelly Ivers told Fox News. “So we’re here instead. We prayed for the victims and for the captain. He will have to live with this his entire life.”

The duck boat that sank on Table Rock Lake had 31 people on board.

The amphibious vessel overturned during a fast-moving summer storm that produced near-hurricane gusts which turned ripples into massive waves.

Cellphone video from a witness showed the duck boat taking on water and struggling to move before sinking, making it one of the deadliest duck boat accidents in U.S. history.

Coast Guard Lt. Tasha Sadowicz of the agency's St. Louis office said the boat that sank was known as "Stretch Duck 07." Like all of the duck boats in operation in Branson, it was required to undergo annual inspections.

The Coast Guard said the Branson duck boat that sank was built in 1944 and had passed an inspection in February.

But Sadowicz said the Coast Guard's "certificate of inspection" placed limits on when the boats can enter the water based on wind speed and "sea state," which refers to the height of waves.

Sadowicz did not have information on Stretch Duck 07's limits but said they will be a focal point of the investigation.

Sadowicz said investigators also want to find out if operators were adequately monitoring the weather and should have reasonably known a storm was approaching.

Witnesses have told Fox News that the weather appeared calm before a storm suddenly whipped up strong waves and spray.

But nearly eight hours earlier, the National Weather Service had issued a severe thunderstorm watch for the western and central Missouri counties.

A severe thunderstorm warning that went out at 6:32 p.m. specifically mentioned Table Rock Lake. The first emergency calls over the accident occurred just after 7 p.m.

Meteorologist Elisa Raffa of KOLR-TV in Springfield said in a phone interview Saturday that her station was forecasting the threat of severe weather all morning.

Coast Guard Capt. Scott Stoermer said the investigation will also look into whether the boat captain followed company guidelines regarding use of life jackets.

The law requires enough life jackets for passengers and crew, and jackets that fit all of the children. Whether to advise passengers to use life jackets is an "operation decision" made by the captain, Stoermer said.

Survivor Tia Coleman told reporters from her hospital bed on Saturday that the boat's captain told riders they would not need life jackets. When the vessel began to take on water, Coleman said "it was too late."

"I believe that a lot of people could have been spared," said Coleman, who lost 9 members of her family on the duck boat.

The Associated Press contributed to this report

Like Him....I have been warning about unsafe and homemade trailers for over 15 years!

Steven Paul, the owner of Test Drive Technologies, has over 20 years of experience inspecting all types of vehicles from cars to trucks and RV’s to Boats.  Some of his favorite vehicles to inspect and appraise have been the many rare and antique vehicles as well as the complex and hard to value commercial trucks.  Having served in the U. S. Army and deploying 3 times in many different field conditions (Bosnia in ’98, Kuwait in ’01 and Iraq in ’03), Steve knows how to quickly diagnose a vehicle, find out what is causing the issue and determine what needs to be performed and accurately report back in a clear and concise manner which is easy to understand.  Steve has a deep passion for uncovering hidden issues, attention to detail and helping other people which is why he started this company in 2009. Steve enjoys spending his time with his wife, kids and dog at the race track, camping and hiking. If you would like more information about Steve or how he may be able to help you or a client, please feel free to email him anytime at “steve@testdrivetech.com”.

Steven comes from very humble beginnings, raised by a determined single mother the best she could, a weekend warrior father who taught him as much as possible when he could and grandparents to help teach him life lessons and manners. Steven grew up the hard knocks way of life earning everything as he went and cherishing opportunities as they came to him.  Today he is happily married with 5 children a service dog and living the life and dream he has always hoped for.  To learn more about Steven’s click the link above.

Missouri lawmaker pledges to beef up safety standards on duck boats....What About Loose And Unsafe Homemade Trailers On Our Nation's Roadways? 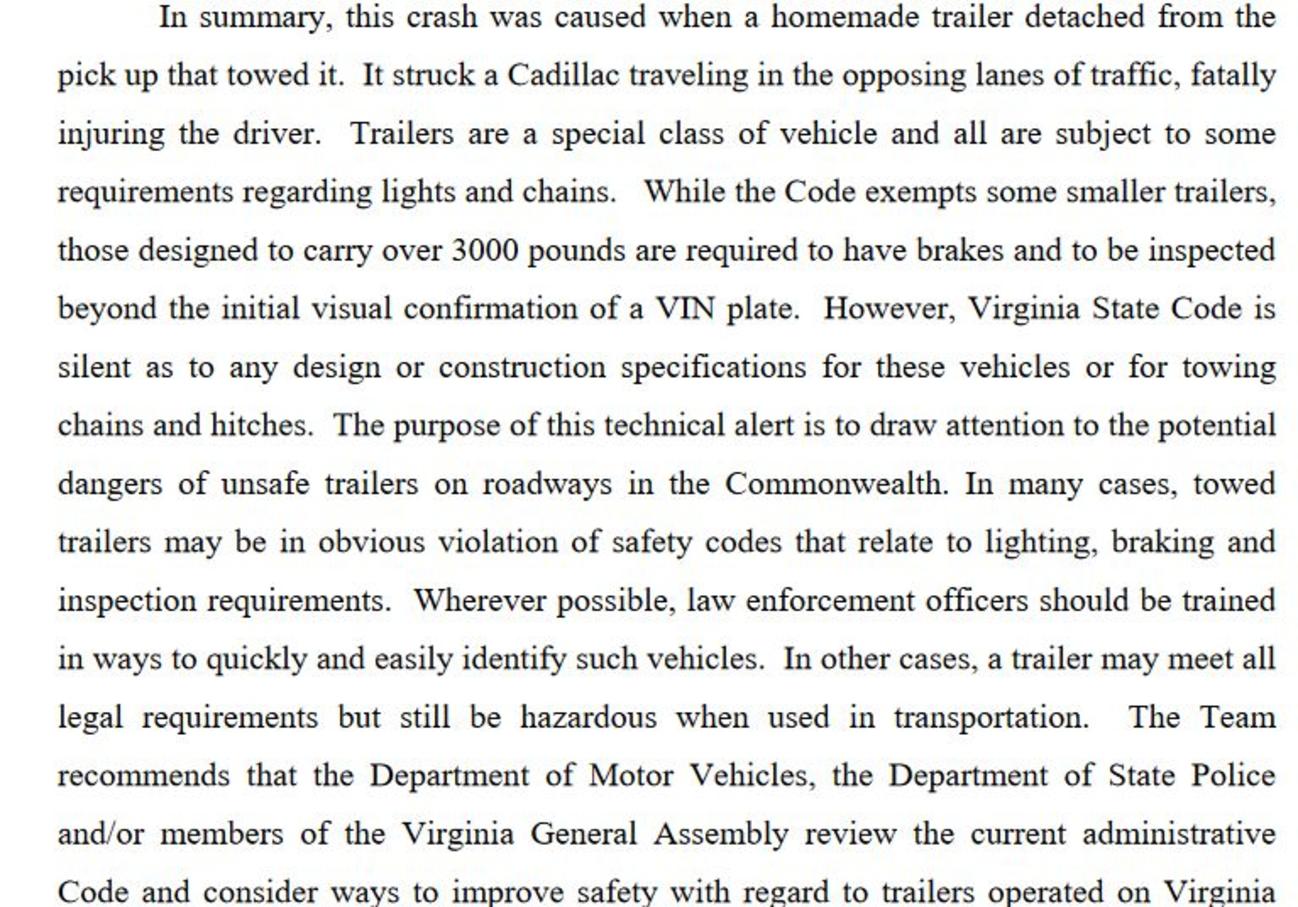 Everyone is on notice.....Every Political Leader is on notice....that if they deem that "Duck Boats" are dangerous and not save when anybody can build one and then a safety person warns and warns and his repeated efforts are ignored.....then why are

Ordinary people building "Homemade Trailers" and "Homemade Hitches" that is partly responsible for the deaths of over 27,000 since 1975 when we include unsafe "Hayrides and Parades"?

BRANSON, Mo. –  The duck boat that sank in a Missouri lake last week, killing 17 people and injuring several others, was built by a self-taught entrepreneur who had little to no engineering training, according to new court documents.

Designer Robert McDowell, the former owner of Ride The Ducks, is a self-taught entrepreneur who grew up in the tourist town of Branson.

He made money by altering and manufacturing dozens of amphibious vehicles, though he lacked the proper engineering skills to do so, according to his own testimony.

In a deposition last year on a separate matter, McDowell said he taught himself how to rebuild and maintain a fleet of duck boats despite lacking any training or certification in mechanics.

McDowell managed to turn his Ride The Ducks boat business into a lucrative one before selling it in 2004.

Since then, Ride The Ducks, through its various corporate iterations, has been linked to several high-profile accidents, including last week’s horrific one that devastated an entire community. Nine of the 17 people killed last Thursday were members of the same Indiana family.

On Monday, salvage crews recovered the Ride The Ducks boat from 80 feet of murky water in Table Rock Lake, less than 10 miles from Branson.

As the vessel broke the surface mid-morning, two small American flags remained visible on the front. Unused orange life jackets dangled from the frame of the boat as a haunting reminder of the chain of events that occurred less than a week ago.

After pulling the duck boat out of the water, investigators with the National Transportation Safety Board took custody of it.

It was not clear how long the investigation will take, but similar ones have taken up to a year.

In an interview with Fox News on Sunday, mechanical inspector Steven Paul said he warned Ripley Entertainment, the company that operates Ride The Ducks in Missouri, about massive design flaws and dangerous safety issues almost a year before Thursday's tragic accident.

Paul, who served in the U.S. Army for six years as a diesel mechanic before opening Test Drive Technologies in 2009, told Fox he was hired by Ripley last year to inspect 24 duck boats. The Florida-based company had been interested in buying the business and wanted an assessment.

"My inspection was so they had the opportunity to know what they were buying before the sale was final," Paul said.

Paul said he sent the company a "two- to- three-page fleet inspection report" as well as 24 checklist reports and "as many as 20 photos for each duck" he inspected in August 2017. In the report, he cautioned that the boats' engines -- and pumps that remove water from their hulls -- might fail in bad weather. In rough conditions, water could get into the exhaust system, and then into the motor, cutting it off. With the motor off, its pump for removing water from the hull would not operate.

The duck boat that capsized had 31 people on board when it sank in 40-foot waters. The amphibious vessel overturned during a fast-moving summer storm that produced near-hurricane gusts that turned ripples into massive waves.

Cellphone video from a witness showed the duck boat taking on water and struggling to move before sinking, making it one of the deadliest duck boat accidents in U.S. history.

See This Report From The VCU Crash Team Way Back In 2006 About "Homemade Trailers
Know That Anybody Can Build A Homemade Trailer And Hitches That Is
Partly Responsible For The Deaths Of Over 27,000 Since 1975 When We
Include Hayrides And Parades So If Duck Boats Are Now On The Radar, Why Not
Homemade Trailers Built By Anybody with A Pulse?  Click Here
View on Mobile