The Owner Of This Trailer Company Is So Stupid I cannot Believe He Said This....

“If the trailer, all of this comes off, it will pull this pin out of it and activate the breaks on the trailer so it can take off on the road by itself,“ said Lago.

This Owner Must Have Been Misquoted..... All trailers just one pound under 3,000 GVWR does not have breaks.  Under Federal Law all Trailers over 3,000 GVWR must have a working breakaway system.

1) If The Trailer Is never inspected every year for the battery back up....nobody will know weather the system works.

2) In Florida you can bypass Federal Law by registering it as a priviate or farm use.

3) Since 1975 over 20,000 dead not by Assult Weapons Fire...but from American's Who tow Trailers That Come Off The Hitch...and fly into anybody.  Yes A flying trailer coming at you is terror on the road caused by other careless Americans and the lack of law enforcement.

"Two seconds of pulling over to stop and check it out can save you a lot of headache if it came off – and a life," said Shawn Lago, owner of All American Trailers in Lantana.

Though they may seem like freak accidents, the National Highway Traffic Safety Administration says eight people die in trailer-related crashes every week.

On Saturday, Florida Highway Patrol said a driver was injured and a passenger killed in a rollover crash on I-95 southbound, right before the Okeechobee Boulevard exit.

According to the accident report, "The trailer began to swerve back and forth causing, the driver to lose control and veer off the roadway and overturn.”

The cause of the crash is still under investigation, but Lago said it’s possible the load could have played a factor.

He offers this advice to ensure a safe commute for you, your passengers and the drivers that may be traveling behind you:

Make sure the ball hitch on your vehicle matches trailer, cupula is locked and secure, always attach safety chains in cross pattern, and attach breakaway cable.

“If the trailer, all of this comes off, it will pull this pin out of it and activate the breaks on the trailer so it can take off on the road by itself,“ said Lago.

Memo....I called the owner and I do have to say that he is a decent and safety concerned business owner.  I hope he and I can continue to have productive conversations....He promised to have the reporter fix the misquotes. 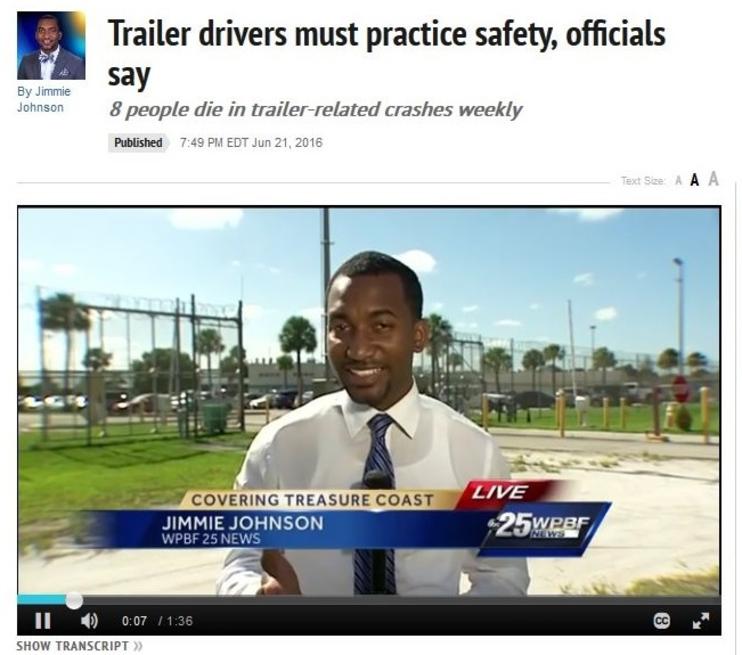