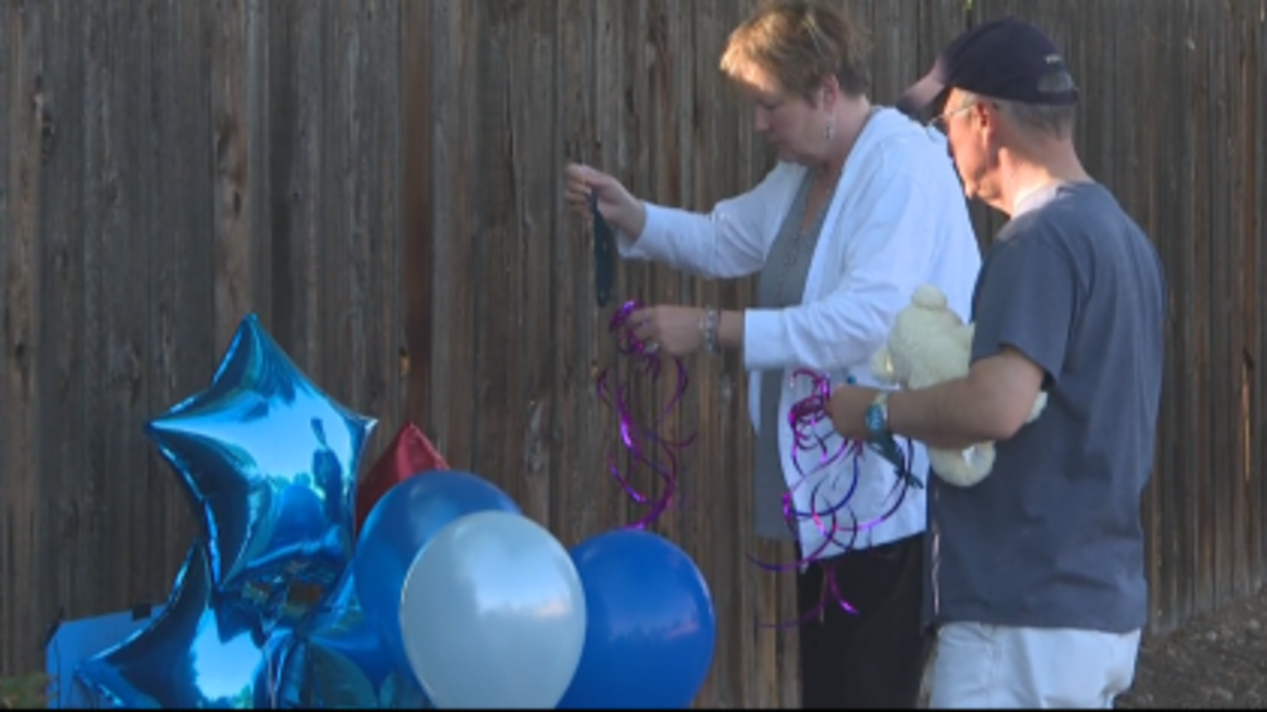 The time to take our cause seriously is now overdue.  Hayride season is almost upon us and other fall parades will endanger innocent men, women and children nationwide as we are the only organization that has tried to prevent these preventable deaths.  Don't you find it odd that not a single insurance company wants to address these death's?

We have a 10 Step safety program.....but not a single locality wants to comply with our recommendations Why?

They Address a WATERSLIDE in Kansas Right?  In Less Than one year did they not?

A boy reportedly struck by a float at the Harvest Festival parade in Windsor, Colorado died at a hospital Monday, according to the Windsor Police Department.

The unidentified boy was a participant on a parade float and died after an "accident" occurred Monday morning, a news release from the police department says.

The boy was participating in a church-sponsored float when he was struck by the float, The Denver Post reports, citing Todd Vess, a spokesman for Windsor Severance Fire Rescue.

The Weld County Coroner's Office will release the boy's identity and cause of death, police said.

The incident occurred toward the end of the parade, which was immediately canceled as the boy was treated and transported to an unidentified hospital. Police said he died shortly after arriving at the hospital.

“The child and family are in our hearts right now," Windsor Police Chief Rick Klimek said in the news release. "Windsor is a small, tight-knit community and we hope to protect the family’s privacy as they grieve the loss of their child." 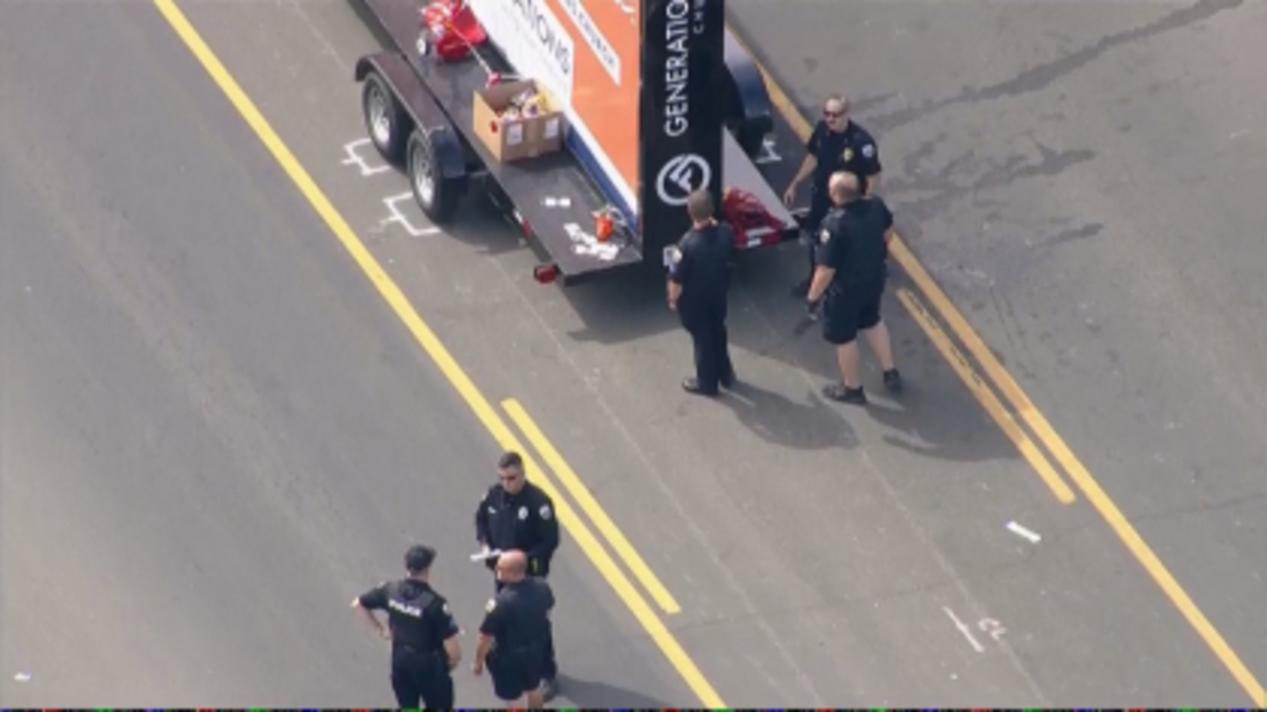 A heap of teddy bears, baseball bats, roses, balloons and candles grew steadily Monday evening in front of a fence near the corner of Chestnut and 7th streets in Windsor.

Just hours earlier, an 8-year-old boy was hit near there by a float during Windsor’s Harvest Festival Parade. He later died at the hospital.

“I’m here just to pay my respects to the little guy and the family,” said Dana Trimble, who watched the collision as it happened Monday morning and came back to the scene that evening with her family. “I would hope to have the same.”

The collision, which happened toward the end of the parade, put a sharp end to the morning’s event.

“We were watching them, and the next thing you know, you just hear shrieking and screaming,” she said. “The mom was just frantic, of course, just screaming and crying.”

A section of the street is blocked off by the Windsor Police Department Monday as officers respond to a child who was hit by a float. (For The Tribune/Larry Bases)

According to a Windsor news release, the parade, which started at 9 a.m. Monday, was immediately canceled as first responders treated and transported the boy and his parents to the hospital.

Todd Vess, a spokesman for Windsor Severance Fire Rescue, said the child was transported to the UCHealth Medical Center of the Rockies in Loveland. He died shortly after arriving.

"The child and family are in our hearts right now. Windsor is a small, tight-knit community and we hope to protect the family's privacy as they grieve the loss of their child," Windsor Police Chief Rick Klimek said in the news release.

During Monday’s parade, officers with the Windsor Police Department asked people who attended the parade to move completely off the route so an ambulance could pass through. Other floats moved to the side of 7th Street to let the ambulance pass as onlookers stood on sidewalks.

The parade, part of Windsor’s 97th annual Harvest Festival, brought hundreds of people to watch floats as they traveled along Walnut and 7th streets. The ambulance responded to the scene about an hour and a half after the parade started.

In a Facebook post Monday, Windsor Severance Fire Rescue officials said they set up a counseling service with North Range Behavioral Health for people who witnessed the event or were affected by it. According to the post, counselors are on call all day and night at (970) 347-2120.

The child, according to the release, was a participant on a parade float.

The float appeared to belong to Generations Church, a Greeley church on track to open a new location in Windsor on Sept. 23.

“The son of one of our families from Generations Church was involved in a tragic accident while serving at the Windsor Day Parade,” church officials said in a statement to Tribune media partner 7News. “Our concentration, prayers and time are being given to the family, grieving their loss, and ours. Future outreach events are on hold, while we do that well, and until we can move forward with unity and wisdom. We and the family covet your prayers and support.”

A GoFundMe page was set up Monday by Clear Water Products, the Greeley company where the boy’s father works, to help support the family. Jared Glass, a field supervisor with the company, said he works with the boy’s father and used to live across the street from the family. His 11-year-old son was friends with the boy, who loved to play football, fish and go goose hunting, Glass said.

A memorial is set up in front of a fence near the corner of 7th and Chestnut streets in Windsor, hours after a boy died near there. (For The Tribune/Jonathan Woodward)

The event started with a crowd of people in high spirits. Many of them had staked out a spot along the parade route hours before it started, in anticipation of an event that helps round out the Harvest Festival, a three-day celebration that includes events with hot air balloons, an all-town barbecue, vendor booths and games.

As first responders made their way along the parade route, the mood turned to concern. Many people began to realize something serious had occurred.

“The whole Town of Windsor’s faces just went from smiles to sad,” Trimble said. “Just ghostly. It was just unreal.”

When Windsor resident Nicole Torres heard the news, she began planning a candlelight vigil for 7 p.m. Tuesday. The vigil will be hosted at the corner of 7th and Chestnut streets, the location where the crash occurred, and people began creating a memorial.

As part of the vigil, Torres encourages people to bring candles for adults to hold and balloons for children to let go.

“You never want that to happen,” she said. “I was thinking, ‘Oh, my goodness, this could be anyone’s child.'”

According to town officials, the rest of the Harvest Festival’s events went on as scheduled Monday. The rest of the celebration is set to include live entertainment, booths and games. More than 150 vendors signed up to participate in this year’s event.

Officials said the Weld County Coroner will release the boy’s name at a later date.

“I know afterward, everyone was grabbing their kids,” Trimble said. “I know I did.” 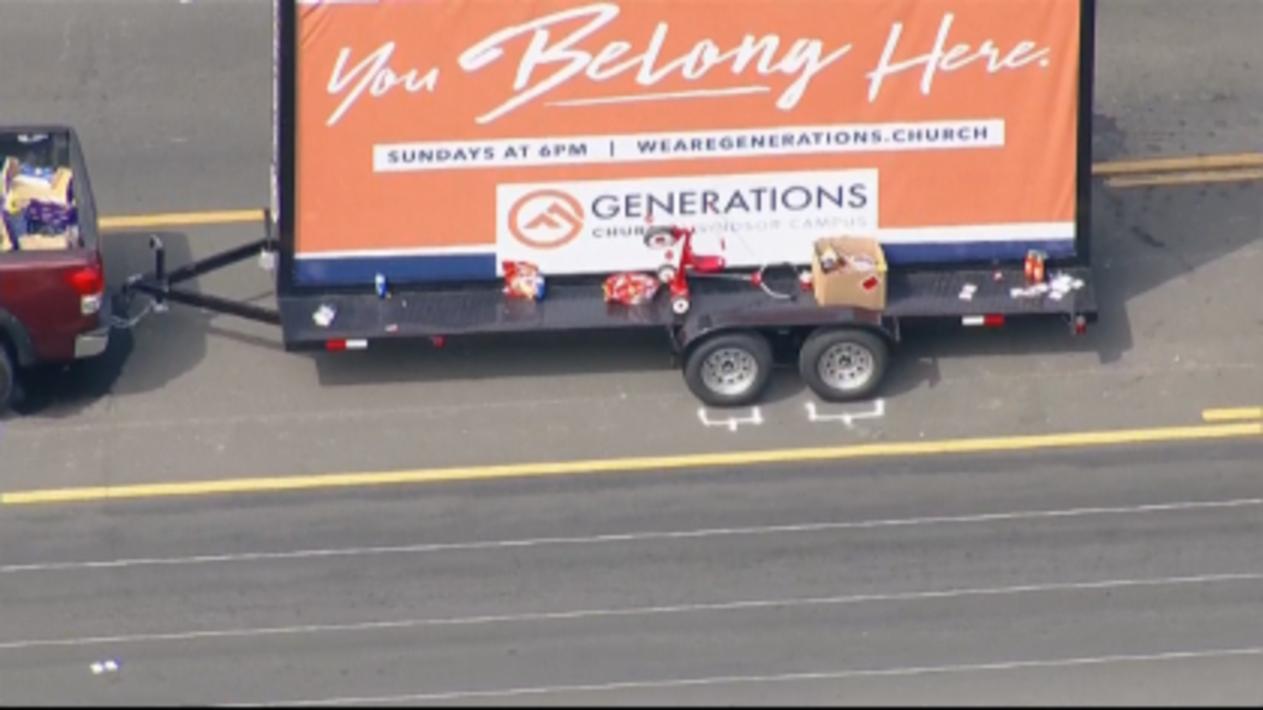 Colorado police on Monday said an 8-year-old boy has died after being struck by a church-sponsored float during a Labor Day parade.

The incident happened during the Windsor Harvest Festival parade about 20 miles southeast of Fort Collins. Authorities and witnesses say the boy was a participant on the float and the incident occurred near the end of the parade route.

“We were watching them, and the next thing you know, you just hear shrieking and screaming,” one witness told The Greeley Tribune. “The mom was just frantic, of course, just screaming and crying.”

The boy's name was not immediately released.

Todd Vess of Windsor Severance Fire Rescue says it wasn't immediately clear whether he fell from the float or was walking beside the float when he was struck.

KDVR.com reported that authorities appeared to focus on a Toyota Tundra pickup truck that was towing an ad for Generations, a Christian church in the town. The family was reportedly in the church community.

The parade was canceled as emergency personnel treated and transported the child to a hospital where he died.

No other details were immediately released. The incident remained under investigation.

Boy, 8, dies after being struck by church float at Labor Day parade 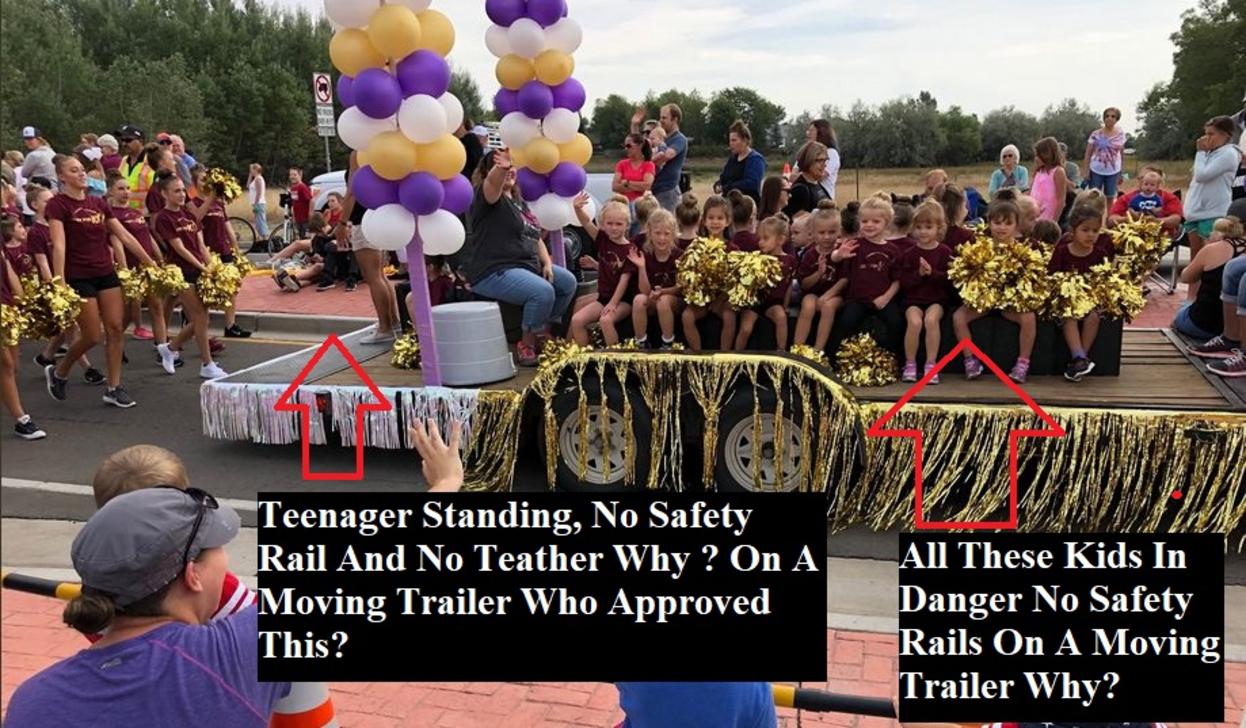 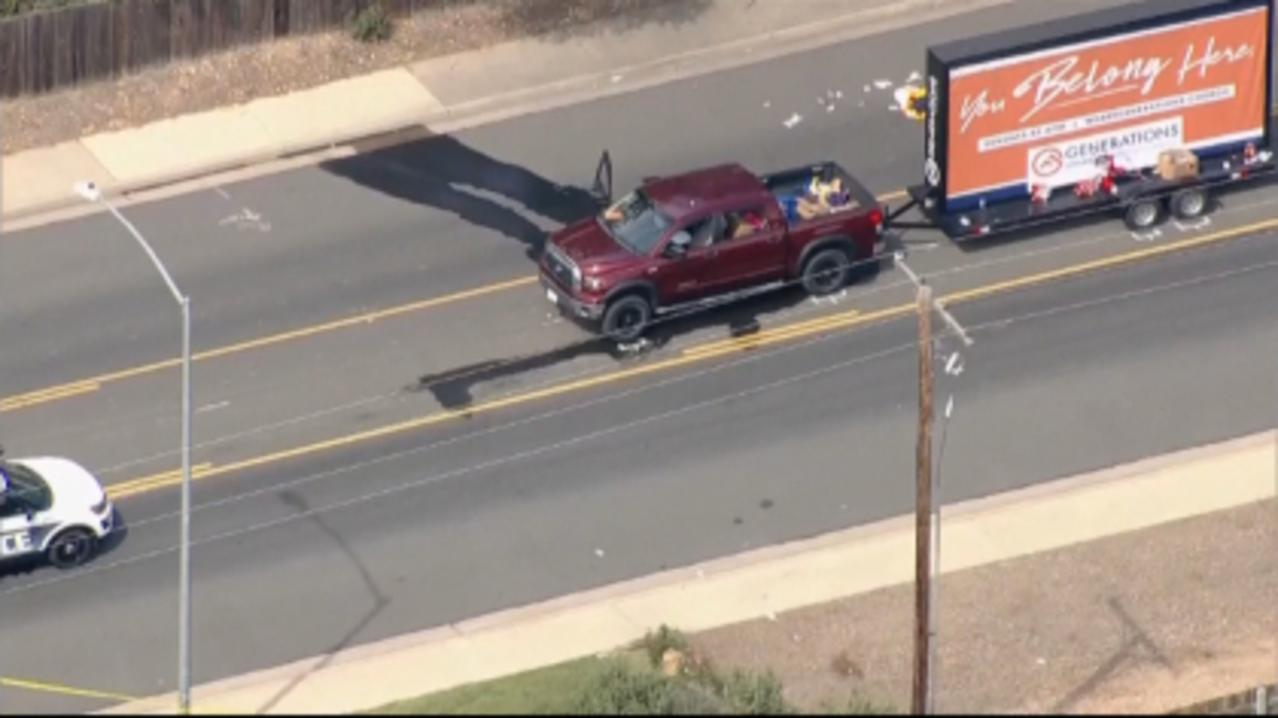 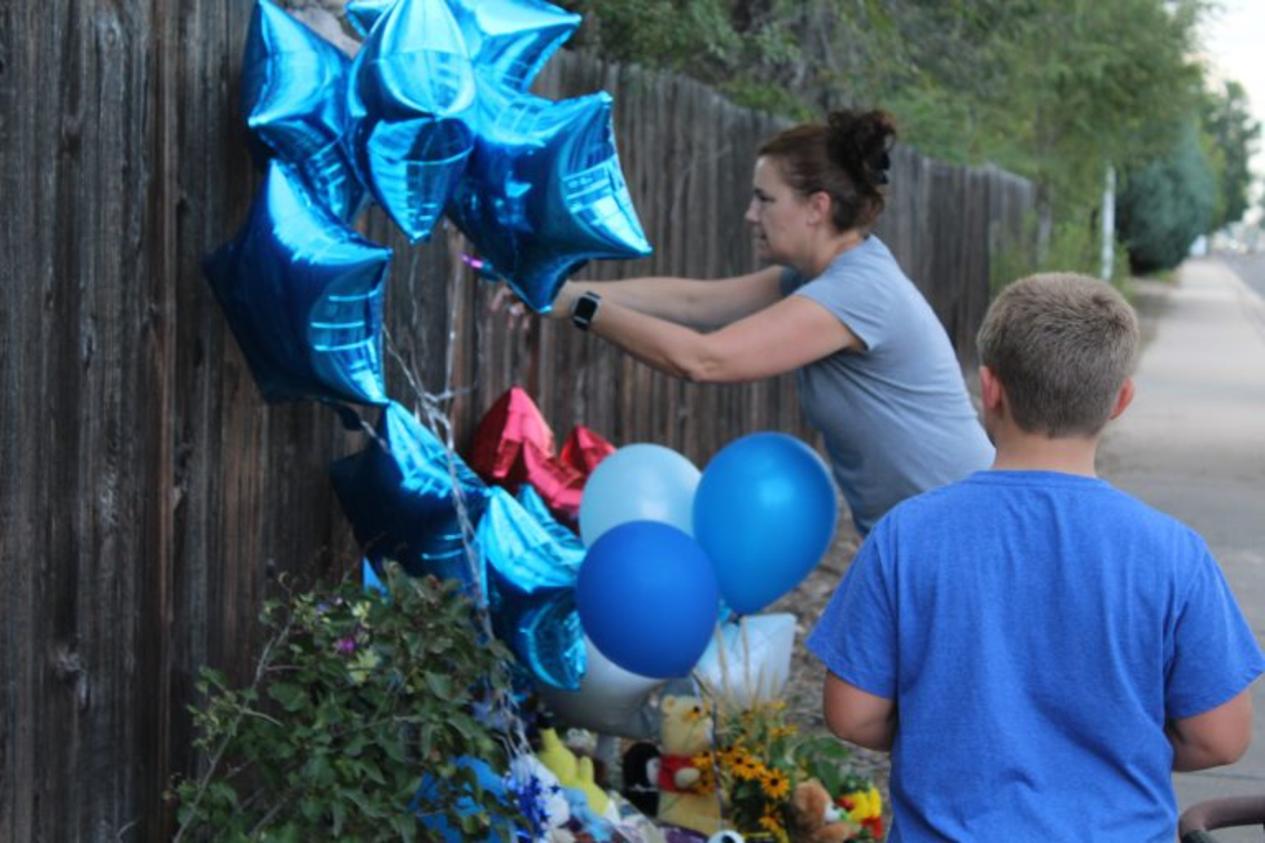 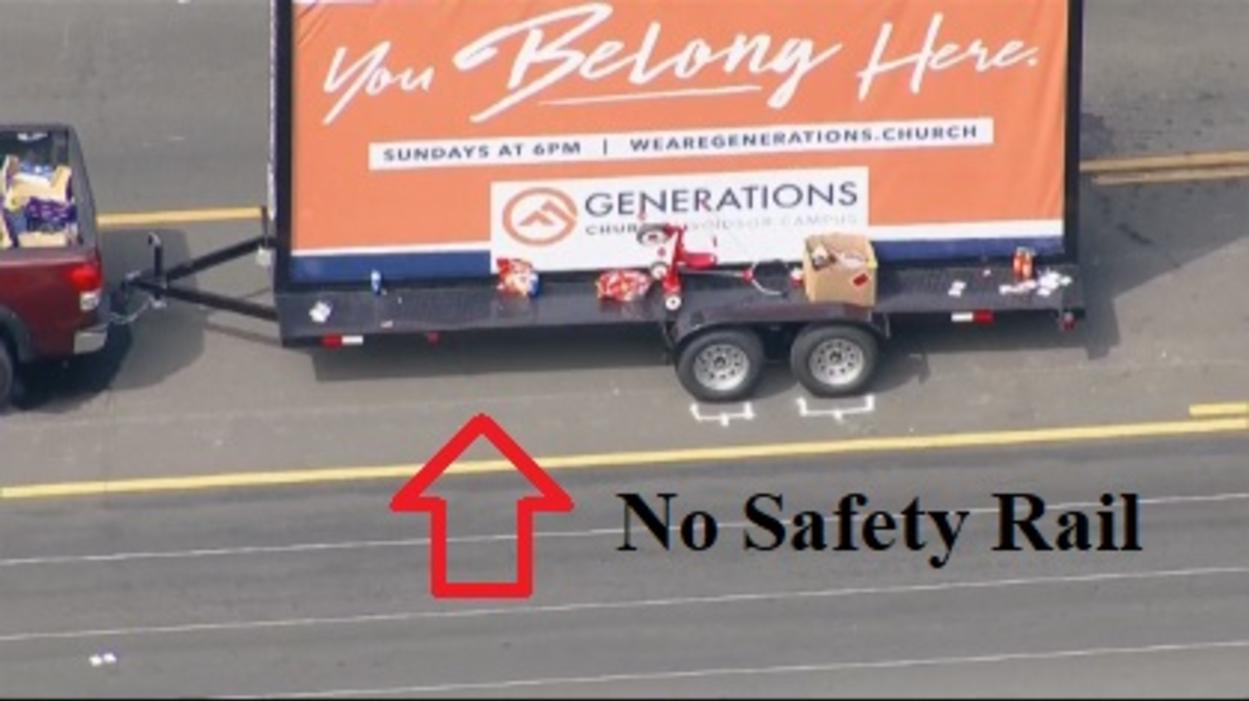 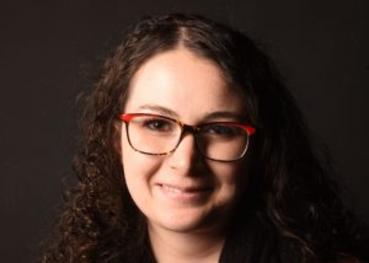 An 8-year-old boy died after he was struck by a float during the Windsor Harvest Festival Parade on Labor Day morning, authorities say.

The child was taken to the Medical Center of the Rockies, where he was later pronounced dead, said Todd Vess, spokesman for Windsor Severance Fire Rescue.

“No matter how much this thing raises, we’re going to take care of them,” Edwards said Monday. “We’re going to be here.”

“The child and family are in our hearts right now. Windsor is a small, tight-knit community and we hope to protect the family’s privacy as they grieve the loss of their child,” Windsor Police Chief Rick Klimek said in a statement.

The boy was part of a church-sponsored float and not a spectator at the parade. It’s unclear whether he fell from the float or was walking beside the float when he was struck, Vess said.

Generations Church confirmed in a statement that the boy was part of its parade float and that his family attended its services. The Greeley church was planning to open a facility in Windsor later this month, according to its website.

“Our concentration, prayers and time are being given to the family, grieving their loss, and ours,” the statement said. “Future outreach events are on hold, while we do that well, and until we can move forward with unity and wisdom.”

The remainder of the parade was immediately canceled following the accident, Vess said.

“This is very rare. It was very traumatic for people who witnessed it,” he said.

Counselors from North Range Behavioral Health are offering to speak with children or adults who witnessed the fatal accident. Anybody who witnessed or hasbeen affected by the boy’s death can call 970-347-2120 to speak with mental health professionals who are on call 24/7.

The child’s parents went to the hospital with the boy and were with him when he died, Vess said.

Edwards said he told the boy’s family to not worry about work or the family’s finances and to focus on healing.

“That little boy was his life,” Edwards said of the father.

Copter4 flew over the scene which showed a tricycle on the back of a sign mounted on a trailer that was being pulled by a truck. Witnesses say the boy was run over.

“The child and family are in our hearts right now. Windsor is a small, tight-knit community and we hope to protect the family’s privacy as they grieve the loss of their child,” said Windsor Police Chief Rick Klimek in a statement.

Shortly after the incident, some people created a community memorial for the victim by placing balloons, candles, a cross and some toys at the site of the tragedy.

Our Expert opinion on why the child was killed.... 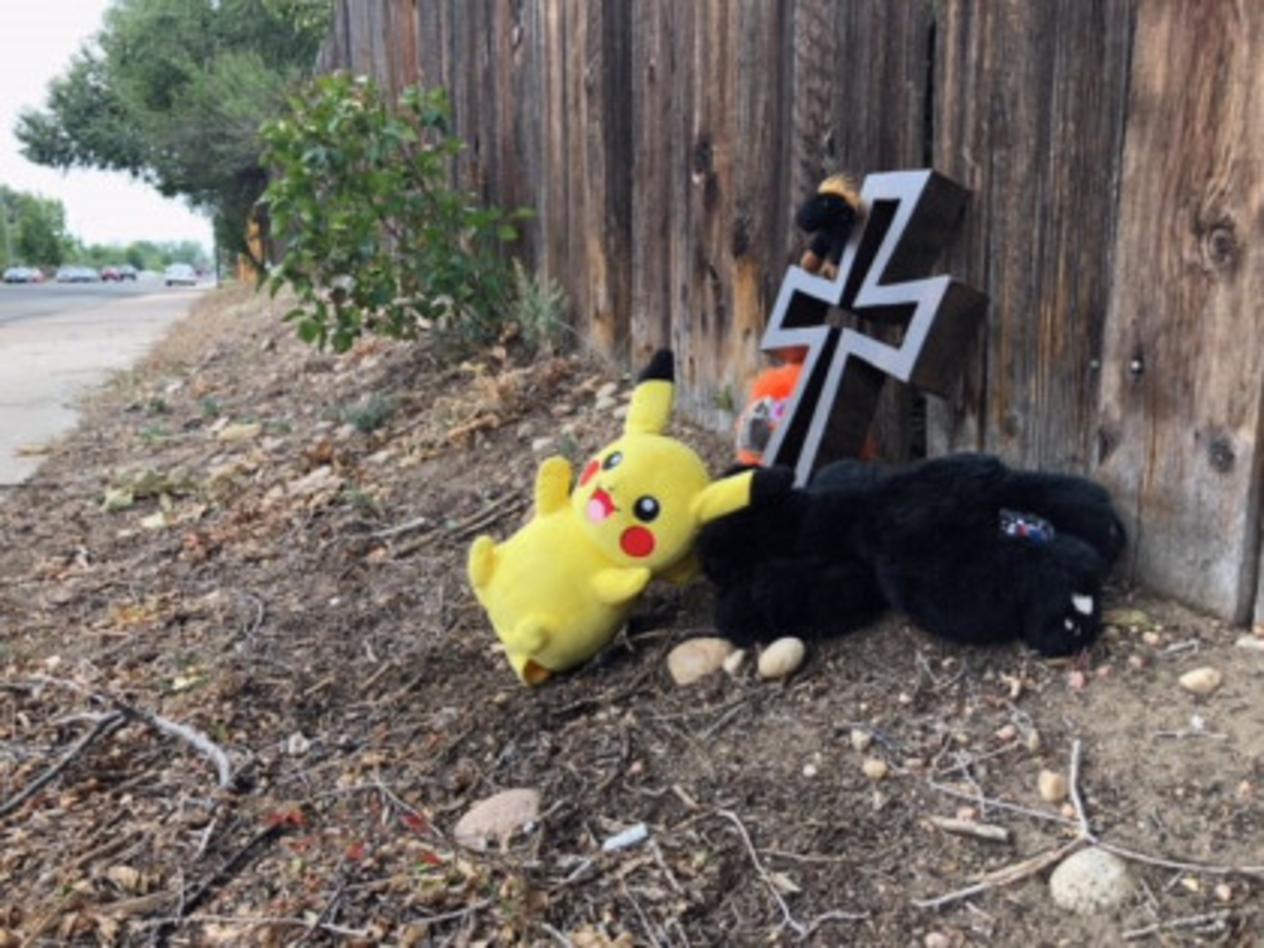 WINDSOR, Colo. (CBS4)– Windsor police say a child died shortly after being struck by a float in a parade on Monday morning.The incident happened during the Windsor Harvest Festival parade on Labor Day morning. The parade was immediately canceled.

The young male was rushed to the UCHealth Medical Center of the Rockies after the incident where he died a short time later. The child was a participant on a parade float for a church that is scheduled to open Sept. 23. 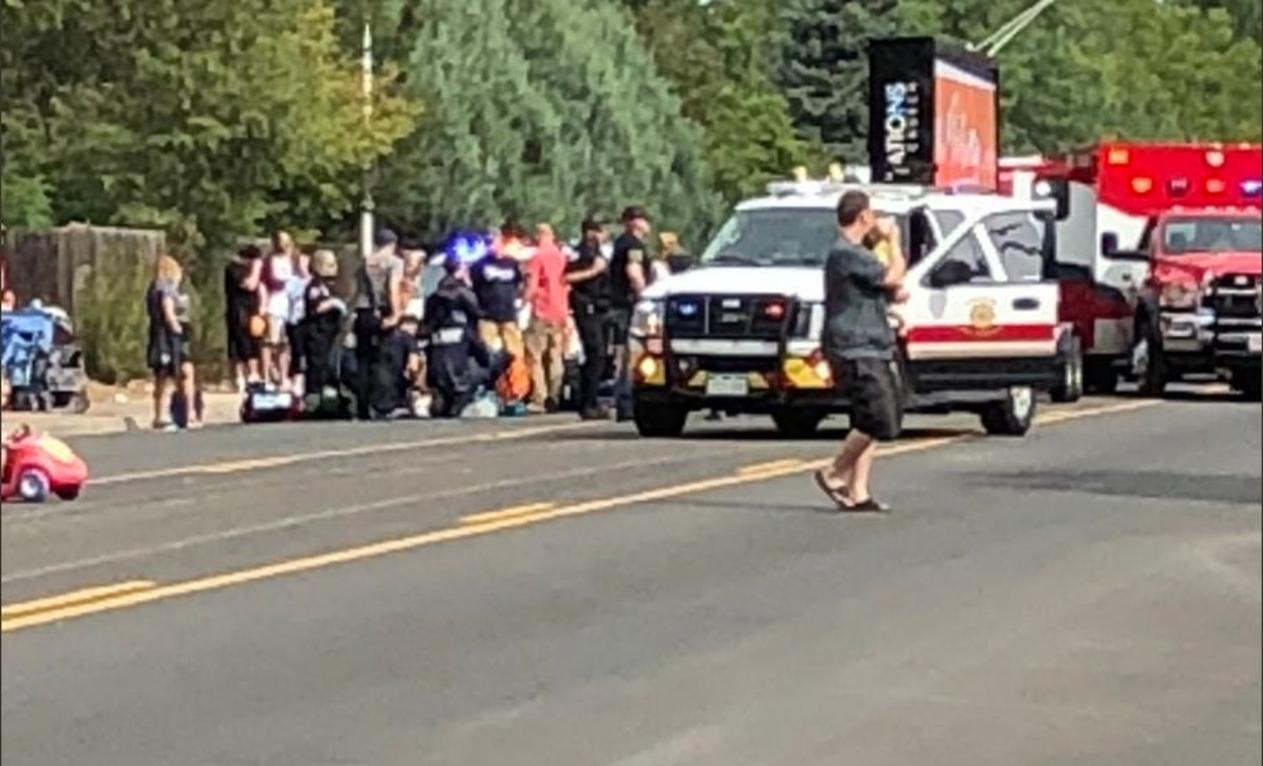 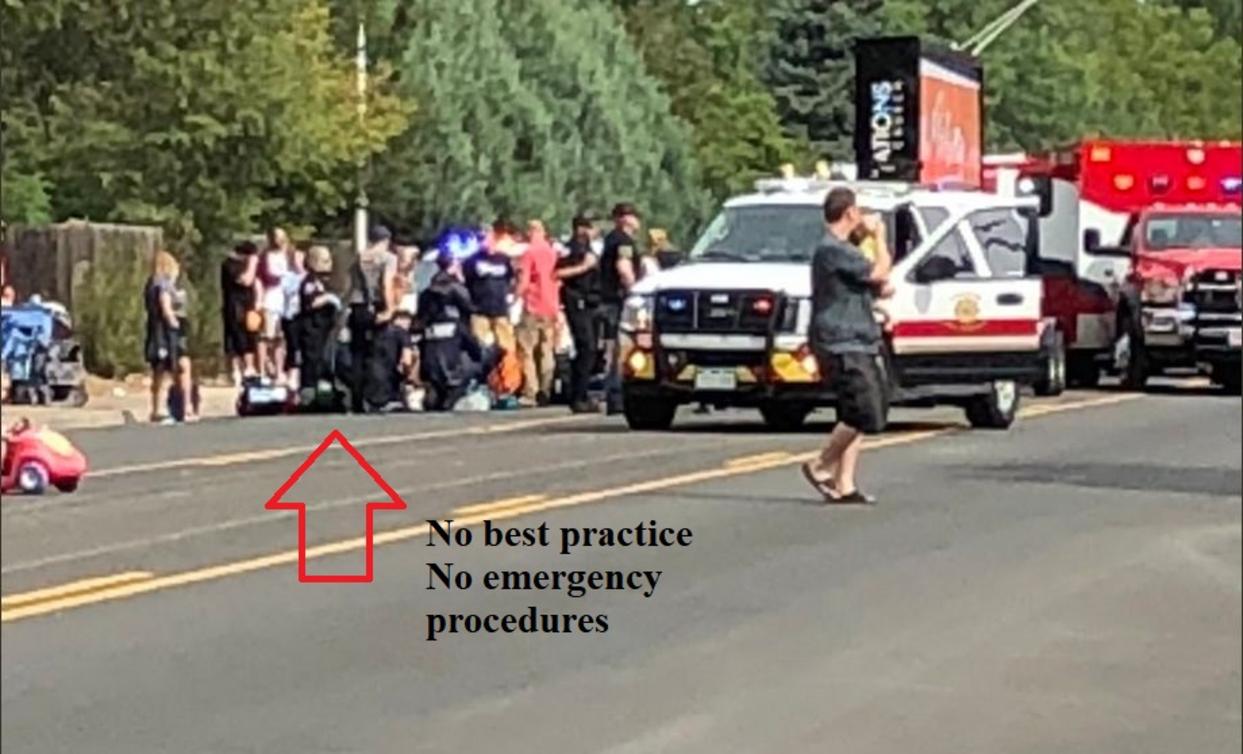 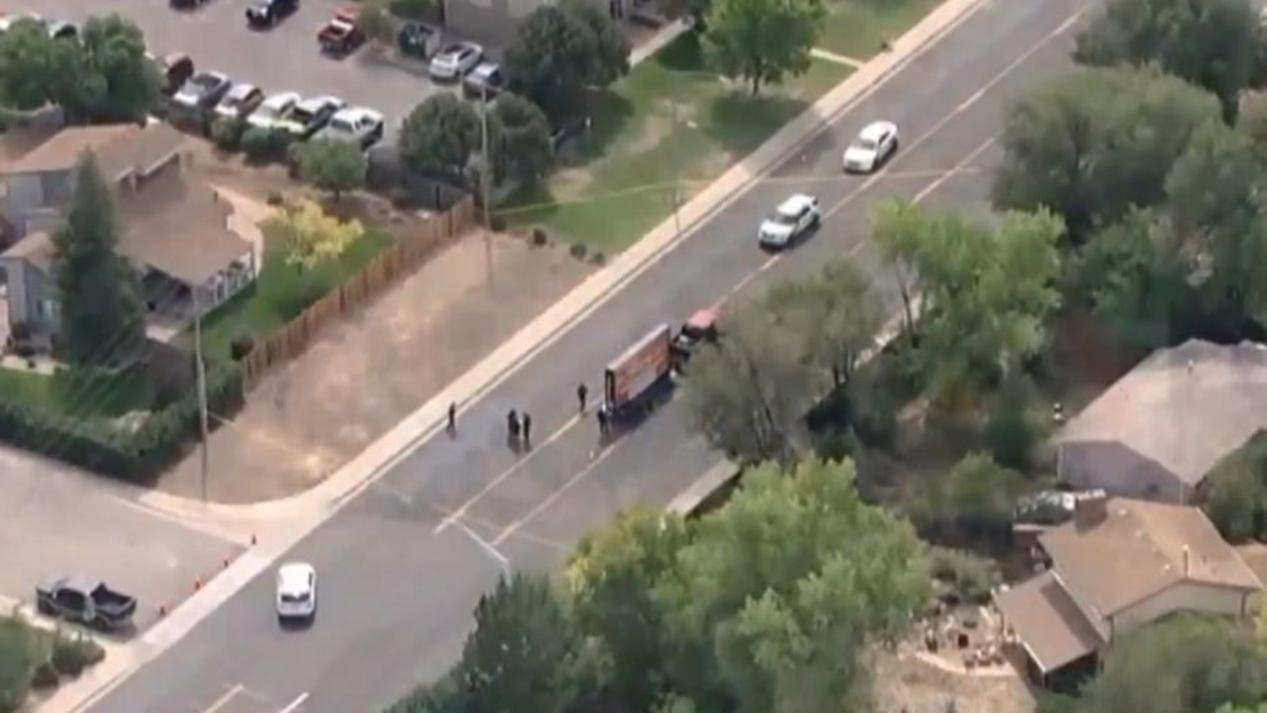