Lubbock police on Thursday are investigating what led to a California woman’s death on a Lubbock freeway when a trailer hitch crashed through her windshield.

Police said that 81-year-old Dorothy Martin died from injuries she suffered after the hitch went through the front windshield of her vehicle on Wednesday near South Loop 289.

First responders arrived on scene at about 5:01 p.m., on South Loop 289 and Utica Avenue, according to a Lubbock Police Department report.

The report states a 2015 Subaru Forester was traveling west on the main lanes in the 4400 block of South Loop 289 when Martin, a passenger in the Forester, was struck by the hitch.

Dorothy Martin suffered life-threatening injuries as a result of the crash, and was taken by EMS to University Medical Center, where she later died.

Police say both Dorothy and William were from Porterville, California.

LPD Accident Investigation Team investigators responded to the scene to determine where the trailer hitch came from, but had no clues by Thursday afternoon, said Lubbock police Lt. Ray Mendoza.

Mendoza urged anyone with information about this case to call investigators at 775-2876. 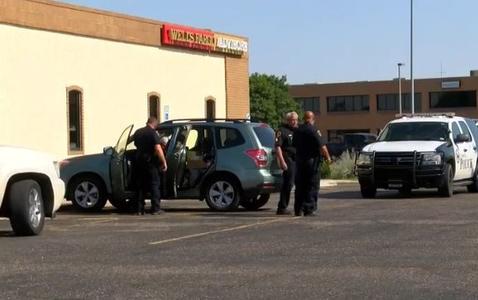 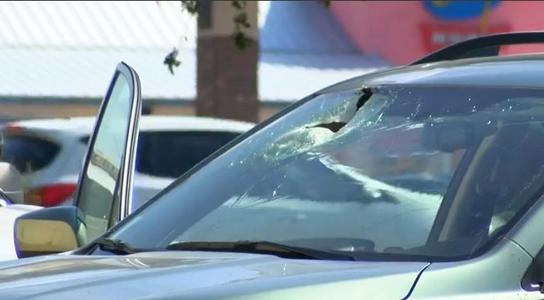 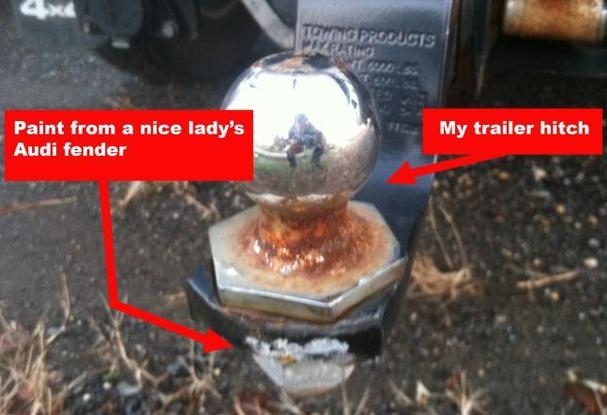 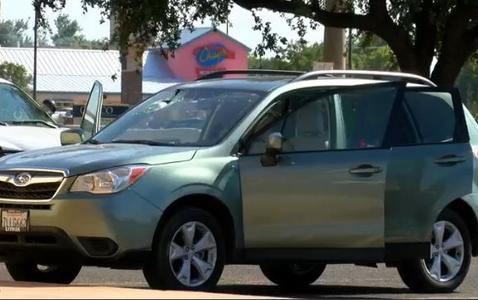 We need a law that makes it mandatory that you remove your hitch if you are not towing anything...why?  Because they come loose and kill others and also damage other vehicles in parking lots and this magazine advocates?  What?

Why You Should Have a Trailer Hitch, Even If You Don't Have a Boat by Joe Cermele

The other night while driving home from dinner with a friend, I pulled off the highway and came to the yield sign at the top of the ramp. At this particular spot, you're merging onto a road with heavy traffic, so I was forced to come to a stop and let the oncoming cars pass. As I was waiting for one last car to whiz by...crack! I get hit from behind and the truck jolts forward. I knew exactly what happened; the person waiting to merge behind me was watching the traffic, not the car in front of them (me). My buddy immediately started the "oh, man, that sucks" routine, but I wasn't too worried. "Ten bucks says there's no damage to the truck," I told him. "They, on the other hand, have a shiny chrome trailer ball in their radiator right now."

We pulled over and I broke out my flashlight for inspection. Sure enough, I didn't have a single scratch or dent or chip or bent panel...just a trailer hitch coated in white paint from the Audi that belonged to the nice lady who hit me. As for the Audi, well, it looked like someone put a .50 caliber round through the fender, which its owner was none too pleased about, but that's her problem.

Obviously, if you get hit by someone doing 40mph, a trailer hitch won't make a lick of difference, but this is twice now I've been spared truck damage during little "oopsy" fender benders. Unfortunately the other instance was my fault. I backed into a parked car and took out the person's tail light. I paid for it, but once again, all I had was a mildly scratched hitch.

If your truck already has a receiver, the $50 hitch and ball investment is worth it. Plus, even if you don't have a boat to pull, people will assume you do. It's kind of like those dudes that always have a guitar pick in their pocket even though they don't play guitar. They just think it looks cool when they're digging for change in line at the grocery store.

Then We Have Others Who don't care:

from snakeplisskin wrote 4 years 6 months ago

I too have had the same thing happen to me. A very nice college girl wasn't paying attention and hit me and there was a perfect hole in the bumper of her Acura and not a scratch on the old Tahoe. Just a warning, I hunt in Illinois and you can actually get a ticket for having a trailer ball in the receiver if you aren't towing something. My lease partners are actually thinking of getting a lease just across the Ohio river in the great state of Kentucky for reasons like this. Illinois has some crazy regs when it comes to hunting and we have actually been getting harrasssed by the local warden. We aren't poachers and get treated like we are criminals.[rock rat's picture]
from rock rat wrote 4 years 6 months ago

That’s the exact reason I always keep my trailer hitch attached. In a lot of areas where I need to park, it is parallel parking and people think that it’s ok to pull up till they bump the car, then reverse till they bump the other car’s bumper to get in their spot. Well needless to say when they do that to my truck, they get a nice scratch on their hood of bumped due to my trailer hitch. Serves them right.[ALJoe's picture]
from ALJoe wrote 4 years 6 months ago

Several years ago on a family vaction to the beach we were setting dead still at a redlight. All of the sudden we were smacked in the rearend by a young lady who must have been setting on the beach drinking all day. Long story short, my hitch had a tiny scratch on it while her little Mazda probably had several thousand dollars worth of damage.[ckRich's picture]
from ckRich wrote 4 years 6 months ago

Great self portrait JC! I imagined you would be taller...[Joe_Cermele's picture]
from Joe_Cermele wrote 4 years 6 months ago

I am on my way out to my truck to put my hitch on right now. This is a great idea. Thanks for the post.[Huron's picture]
from Huron wrote 4 years 6 months ago

I keep my hitch on 365 for the same reason, gives me peace of mind from parking lot incidents, etc. The parts will rust more quickly from the winter/salt but that's fine with me.[chsntail's picture]
from chsntail wrote 4 years 6 months ago

Check the laws first.. it`s actually illegal here in NY to drive around with your reciever and ball on when not in use. Last yr, the state was desperate for $$$ and were issuing a bunch of tickets[fatkins76's picture]
from fatkins76 wrote 4 years 6 months ago

I always called my hitch a "redneck curb feeler". I lost count of how many times I've been tapped in traffic.[whitefish's picture]
from whitefish wrote 4 years 6 months ago

I have a '91 chevy pick up and it's got a very solid bumper compared to what is put out nowadays. I was coming out of the store one evening and I saw the plastic taillight material all over the ground behind my truck and bumper. Not a scratch on my truck but someone lost a taillight and then some. They didn't even leave a note.[rob's picture]
from rob wrote 4 years 6 months ago

Reading about stooopid protect yourself from yourself laws sure makes me glad I live in Montana.
Joe, great post. That's some funny stuff, and I never take my hitch off.[Jeff Bowers's picture]
from Jeff Bowers wrote 4 years 6 months ago

That's the one thing I miss about my '79 Silverado.

It was the heavy version, with a extra-big steel step bumper. That truck got rear-ended (? three, four) times while I had it. Never scratched the paint.

But other people are right about checking the law. Some states have a protrude-past-the-bumper restriction.[Phil1227's picture]
from Phil1227 wrote 4 years 6 months ago

I usually take my hitch out because I got tired of hitting my knee on it.[Blue Ox's picture]
from Blue Ox wrote 4 years 6 months ago

I've banged my shins plenty of times on my hitch, but I'll never take it off, illinois be damned.[ronmelancon's picture]
from ronmelancon wrote 4 years 6 months ago

Why are you doing this...your hitch is now not safe to tow and you should replace your damaged hitch...

Go to www.dangeroustrailers.org you need to know that every hitch has not been tested! In 2010 Alone 385 people have been killed by passenger cars that tow trailers...!!!![ronmelancon's picture]
from ronmelancon wrote 4 years 6 months ago

Right to the point....every one of you who tow are using a system that has not been tested...and you are liable for the injury's and destruction....www.dangeroustrailers.org
United States of America through the Federal Motor Vehicle Safety Standards (FMVSS) with respect to coupling requirements and manufacturers are not obliged to certify couplings. This approach is consistent with the US government’s principle of not getting involved in pre-market approval of vehicles or components."

Not good enough is it Ron. Your government forgets it is the people that vote them in not Acme Trailers or Ford motor company. No wonder you have a problem when manufacturers have more say than the thousands of victims lifes are worth.

Complacency Can Kill!
All couplings can accidentally uncouple. And your Country does nothing except fight you.[ronmelancon's picture]
from ronmelancon wrote 4 years 6 months ago

It is like a terrorist shooting a missle at your car on the highway.

An unregistered, unispected and homemade trailer is terror on the highway.

Here are the families.........only our organization has kept track....

NOBODY HAS PUT IT ALL TOGETHER EXCEPT US.... AND NOW